So what started out as a random assortment of climbing buddies at the New, ended up being just me and Steve.  Some folks bailed earlier in the week, one signed on AND bailed all on the day before, and others bailed after driving for an hour and deciding they were too tired to continue (not naming names though, Manbert…).  🙂
Anyway, we spent our first day at Endless Wall, which is in my opinion one of the most beautiful places in the gorge.  I realized that I had a few head issues to work through, but by the end of the day, things were feeling great.  My knee held up fantastically – the golf ball is still there (I went to have it drained and nothing came out – turns out it is just scar tissue…) but it isn’t really hindering me to speak of, so its acceptable for right now. 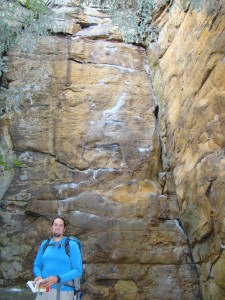 Steve at the base of Exoduster

DAY 1 ~
Exoduster – 5.10b – Felt really hard for a 10b.  I had a difficult time committing to the crux move, and had to hang for a bit, as the footholds were polished and felt very insecure, but when I finally did, I got through it clean.
Strike a Scowl – 5.10b – This has to be one of the best routes at Endless Wall!  Perfect views, got the technical stuff out of the way early, and great exposure!  My head felt a lot better on this one, probably b/c it was more my style of climbing. 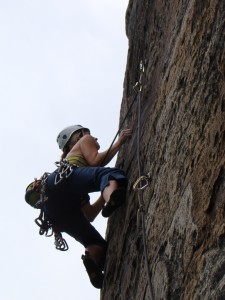 Working up Strike a Scowl

Glass Onion – 5.10b – Fun slab climbing with some pretty reachy moves.  Went back and forth with my head feeling confident, then timid, then confident, etc. throughout the route.
Upheaval – 5.9 – The only climb of the day that I had done previously.  This one was even more fun than I remembered, and I felt really good on it.  I think it helped that it was nice and long and allowed me to get into a better rhythm. 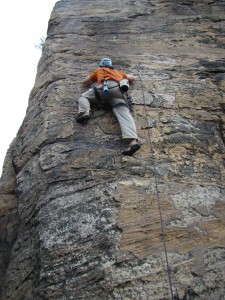 Steve taking a run up Strike a Scowl

Fool Effect – 5.9 – GREAT way to end the day!  This climb was LOOOOONG – a rope stretcher even for our 70 meter rope!  This climb had lots of variety, from technical slab to some layback flakes, with even a small roof thrown in at the top.  Most exciting however was the wasps’ nest inside the flake at the 6th bolt.  Unfortunately, that was my clipping hold, so I couldn’t just move on by.  I had 5 of them on me at one point while I was trying to get the rope into the quickdraw, but fortunately for me, I only got stung once.  It hurt right when it happened, but by the end of the evening, I could hardly feel it.  The wasps didn’t seem too aggressive (they MUST realize at this point that their choice of housing was in a high traffic area…)  I’ll even go out on a limb and say that perhaps the sting was even by accident 🙂 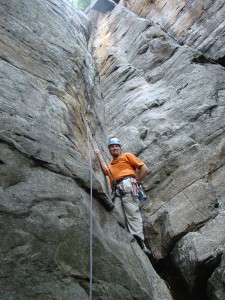 We wrapped up our day at Pies n’ Pints, the local pizza joint.  We had to wait a while since we didn’t roll in until around 730, but it was definitely worth the wait.  We ended up making friends with the couple at the table beside us while we waited for our food, which illustrates a concept that I will probably elaborate on in another blog, but for now, I’ll keep things to the bare bones trip report.

DAY 2 ~
Casper Says Boo – 5.9 – How’s this for irony?  The first route we wanted to check out that day had a bailer carabiner as well as a quickdraw hanging enticingly from the last two bolts!  The route consisted of broken flakes/jugs up to a steep finger crack at the top.  I can see why someone might have bailed if 5.9 was at their limit, b/c the last moves were quite committing… 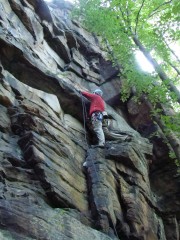 Radial Rimmed – 5.10c – this route felt way harder than 10c to me, but it was also not my style of climbing in the least…big bouldery moves (including an all points off dyno), on rolling, sloping holds.  It took me a while to finish the route, and I definitely had to use the stick clip midway thru the route, which rarely happens, but I think mentally I still had some confidence issues to work through.

Pondering the crux on Radial Rimmed

She Rides – 5.9 – This was a really frustrating climb for me.  I figured out the sequence I wanted to use to get through the crux, and went back and forth getting just above my bolt, then downclimbing back to safety.  I couldn’t commit to actually doing the move, b/c I was unreasonably scared about falling.  I lowered off from my high point, and Steve went up from there, where he proceeded to go for it with gusto and finally worked his way through the crux after taking 3 10-12 foot falls.  I was so proud of him for sticking with it, but also felt bad that he took the falls, especially when I breezed right through it after he set up the toprope for me.  It was frustrating to know that I was more than capable of doing the moves on the climb, but was unable to really even give it one good try when I was leading it.  Another positive though – we got another bailer ‘biner!!!  Now we have MORE than replaced what I left behind in Maple Canyon! 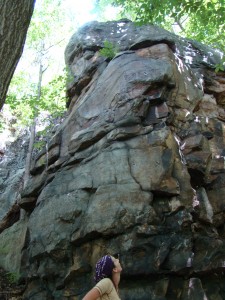 Let Them Eat Pancakes – 5.10b – It was getting late, but I wanted some redemption after the last climb, so I opted for this one.  I had done it once in 2008, and knew that the crux was over early, and the falls would be nothing but air, since the crux involved a roof.  I was really glad that I did this one.  I took several “practice falls,” in the 3-5 feet arena and felt much more confident after that.  I still had to hang at the crux bolt to get things together mentally, but I pulled through the crux way easier than the previous time I was on the route, and felt a lot stronger about the climb as a whole. 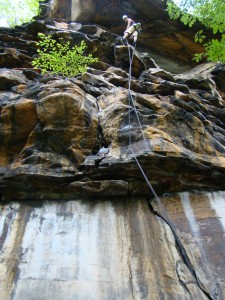 Setting up the rappel on Pancakes

OVERALL –  Great climbing, great weather, great weekend!  I felt all over the place mentally, but was happy to be able to work through a lot of stuff.  I was happy to end the weekend confidently!