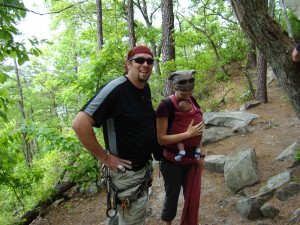 So if our hiking trips the past few weekends have improved my mental health dramatically, its probably safe to say that our first day out climbing with Canaan skyrocketed my psyche into the next stratosphere.  A little fresh air, great company, and real rock sure can go a long way – if only there was a way to bottle it for future use during times of injury, sickness, or on rainy weekends! 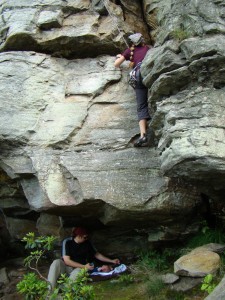 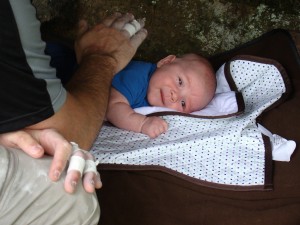 The C-Squatch enjoying the fresh air

Anyway, after 9 months of “observation” in utero, and 6 weeks of training outside the womb, Canaan was finally ready to participate with Mom and Dad in one of their favorite activities!  We opted for a day trip to Pilot Mountain for our first time out, to keep things from getting too crazy.  Our wonderful friends Norbert and Manuela volunteered to be our guinea pigs and go with us, since with a baby on board, we obviously need at least one other person with us at all times so that the job of belayer and baby-watcher aren’t ever assigned to the same person. 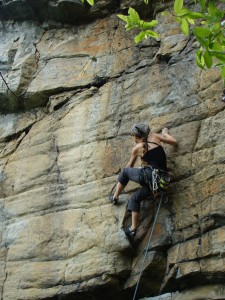 Moving into the crux on "The Herculean Test"

Our adventure actually started the night before, when we attempted to pack our gear with a baby in mind…7 diapers, 2 burp clothes, a blanket, changing pad, and spare set of clothes later, we were loaded down and ready to roll.  Since Manbert had the bigger vehicle, we put the carseat in their car so that we could all somewhat comfortably ride down together.  At first I was a little concerned, b/c Canaan was wide awake for the majority of the ride there, and of course was hungry the minute we pulled into the parking lot.  Things settled down quickly though – Manuela stayed with me while Canaan the C-Squatch did what he does best, while Steve and Norbert went off to set up some routes.  We decided to start off at the routes below the parking lot – its a nice area for a warm-up, and there are several nice, long routes there, so with a party of 4, that meant we’d be camping out in one spot for a long time, which worked out great with Canaan. 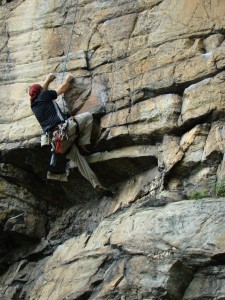 Steve cleaning up on "The Herculean Test"

In addition to testing things out with Canaan, I was also excited about testing out my new nursing top that Mountain Mama had sent me last week!  Its made out of the same awesome fabric that the maternity tops they had sent me were made from, and it has front flaps that made nursing really easy and convenient (which was especially nice with a little one in the middle of his 6 week growth spurt!).  The only negative was that I got two copious blobs of spit-up on the sleeves pretty early on.  Combining that with the heat wave we’ve been having this week made for a sour milk stench that was better off for everyone back in the backpack…I’ll have to have a talk with Canaan about dirtying up the endorsement clothing…:) 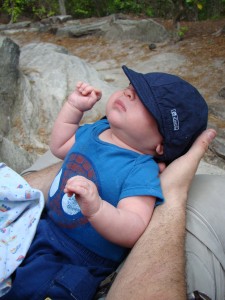 We finished up there a little after lunch time, and I was feeling ready for my first postpartum outdoor lead.  For anyone not familiar with Pilot, it is mostly a top-roping area, so there wasn’t a ton to choose from – due to the rock quality, not many routes are safe to lead on gear, and the handful of bolted routes are 5.10 and up (except the 5.9, which a big party was on, and the slabs, which are always wet).  I opted for “The Herculean Test,” which although it goes at 5.11a, its one of my favorites at Pilot, so I’m very familiar with all the moves.  (Plus, there was something poetic about 5.11 in light of the  5.11 Pregnancy Experiment…)   Even though its not more than 60 feet, its got a little bit of everything to offer – big, bouldery moves off the deck to a technical, crimpy crux leads to juggy overhangs, with a very exposed step across at the top to clip the anchors.  The last person in the previous party on the route was unable to clean it, so I volunteered to get their gear for them in exchange for clipping the ridiculously high first bolt for me as their last person was being lowered. 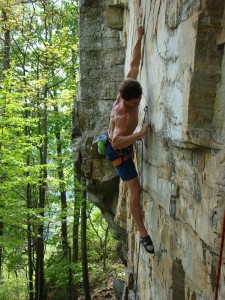 Shane on "Black and Blue Velvet" 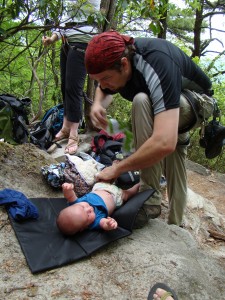 Diaper changing at the crag!

The lead felt FANTASTIC!  The bouldery start felt insanely easy compared to how it did at 6 months pregnant, and the crux seemed straightforward and methodical.  The only thing that didn’t feel back to normal was that I didn’t quite trust my ability to assess my endurance level, so I did play it safe and hang before moving through the crux to make sure I would have enough gas to make the clip, but I could care less.  It just felt indescribably good to be back on the sharp end again! 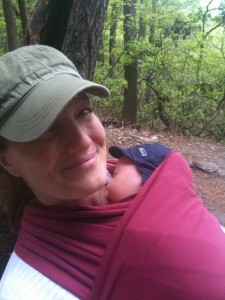 Canaan found a cute redhead to snuggle with!

By that time, it was really crowded, and not much was open.  I was feeling pretty whipped at this point, so I didn’t mind a bit.  Steve set up a couple of easy top-ropes, and we also watched our friend Shane working his project, “Black and Blue Velvet” (which officially goes at 5.13a, but word on the street from the local hardmen is that its actually closer to 13b or c, maybe even d). 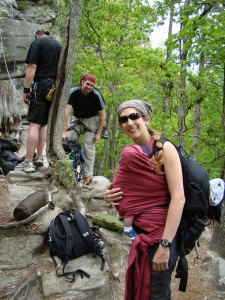 Packing up after a long but fun day!

We packed up shop and headed out around 5 or so, stopping at Wendy’s for a quick bite and to fulfill the Frosty tradition.  Canaan got a little fussy for his dinner about 30 minutes from home, but luckily we had a bottle of breastmilk on hand to tide him over until we could get home.  I can’t describe how good it felt to get out and do something normal again!  Its so fun to introduce Canaan to the things we like to do, and to enter back into society as a group of 3 instead of 2!  Big thanks to Norbert and Manuela for helping us out – we couldn’t have gone with out them!  You guys are the best!!!  🙂 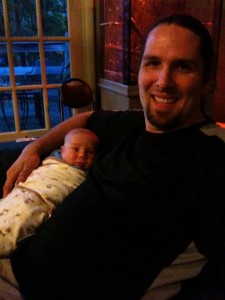 Reflecting on our adventures at the end of the day!

Canaan’s next challenge – The New River Gorge!  Our plan is for that to happen sometime in the next couple of weeks, so stay tuned for the trip report and pics!