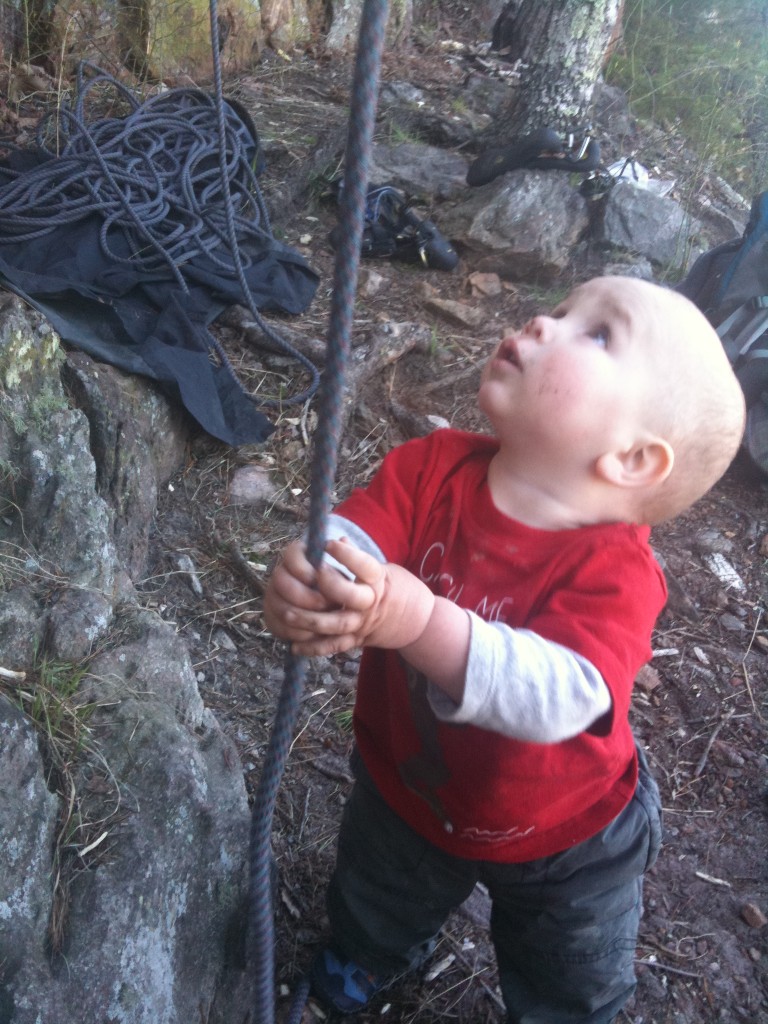 We’ve been in Charlotte for a little over a month now, but hadn’t had a chance to explore any of our new local rock until this weekend.  We’d been to Crowder’s Mountain before two other times when we were relatively new climbers, but not since 2007, so it felt like a new area.  Crowder’s Mountain is located near Gastonia, NC, and is only 35 minutes away from our new digs!   I can see why Crowder’s doesn’t always have the best reputation among NC climbers. It can get overrun with red-helmeted boy scouts and biting flies during the summer, hikers stand in amazement gawking at those “crazy folks on them thar ropes” (right before tossing their empty beer bottle over the cliff) and the approach is a 30 minute stairmaster workout on level 10 (Steve and I will both have buns of steel by next fall…) But for a backyard crag, it was more than adequate, and I daresay we’ll both have plenty of projects to last us a good long while there!

We were lucky that our friend Bennett wanted to meet us down there, along with two of his friends (who are now our friends 🙂 ) and their burly but mellow boxer, Zoey.  We huffed and puffed our way up the trail – Cragbaby, aka the Backpack Leech, has evidently put on a few pounds since the last time I’ve hiked any substantial distance with the backpack carrier!  After passing a giant group of folks taking a class on toprope anchors, we eventually arrived at the base of the David’s Castle Wall, where we had decided to begin our day.  We started out on two short but sweet routes, Two-Step (5.10), and Psychotic Reaction (5.10b/c).  The first was easier than the second – a few moves on crimpers that felt pretty small for a warm-up led to a big undercling flake into a bulge.  The latter however, felt a big sandbagged – our consensus was that it felt like a techy V3 boulder problem followed by the easier finish pulling over the same bulge as for the first one. 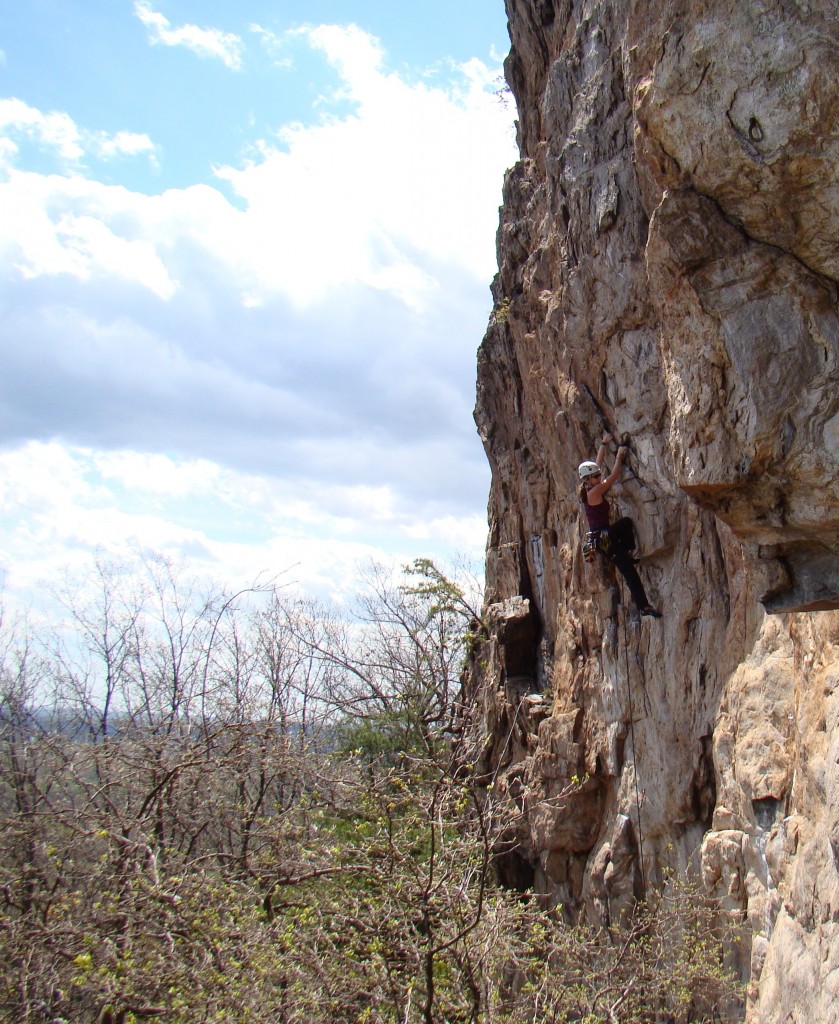 Next up was Electra (5.10c).  I had been on this once back in 2007, but not a single move felt familiar to me at all…so I’m gonna give myself credit for the “flashback,” a term coined by my friend Matt.  ( It’s when you’ve climbed a line years before, don’t remember anything about it, then come back and send the route first go 🙂  ).  Anyway Electra was a stellar route, deserving at least 2 out of 3 stars.  The route is fairly easy to read (big moves to good holds) and there’s not really any one “hard” move on it – its just relentlessly sustained until about halfway above the 3rd bolt.  There is a decent runout between the last bolt and the shutts, but by that time the terrain has backed off to 5.9-ish.

There were a couple more routes in that area that looked enticing, but we wanted to check out the Red Wall before the end of the day (plus Cragbaby was in desperate need of a nap, and the easiest way to accomplish that is a well-timed a hike in the carrier).  I figure since we live here now there’s no need to be in a rush to get on everything right away.  The Red Wall was more out of the way, and subsequently was less crowded.   At first I opted to toprope Desperately Seeking Juggage (5.11b) instead of leading it – which I immediately regretted because I flashed the route without any trouble.  Oh well.  Another short route, it consists of technical moves on SHARP crimps and mini-flakes on a vertical face – my favorite type of route!  After everyone else had had a go, I pulled the rope and sent the route on lead  🙂  Bennett and I also toproped Silence the Critics (5.12b) – ridiculously hard!  Big mantle down low to very tenuous laybacks along a small flake, then a couple of really big moves on skin-rippingly sharp holds before finishing on the Juggage anchors.  I was feeling pretty good up until the crux, when the flailings commenced – I’m pretty sure I did all the moves, but not with any sort of sequential flow, and the thought of trying to clip the 3rd bolt on lead during all of those shenanigans sounds terrifying – yep, no regrets on the toprope choice on this one! 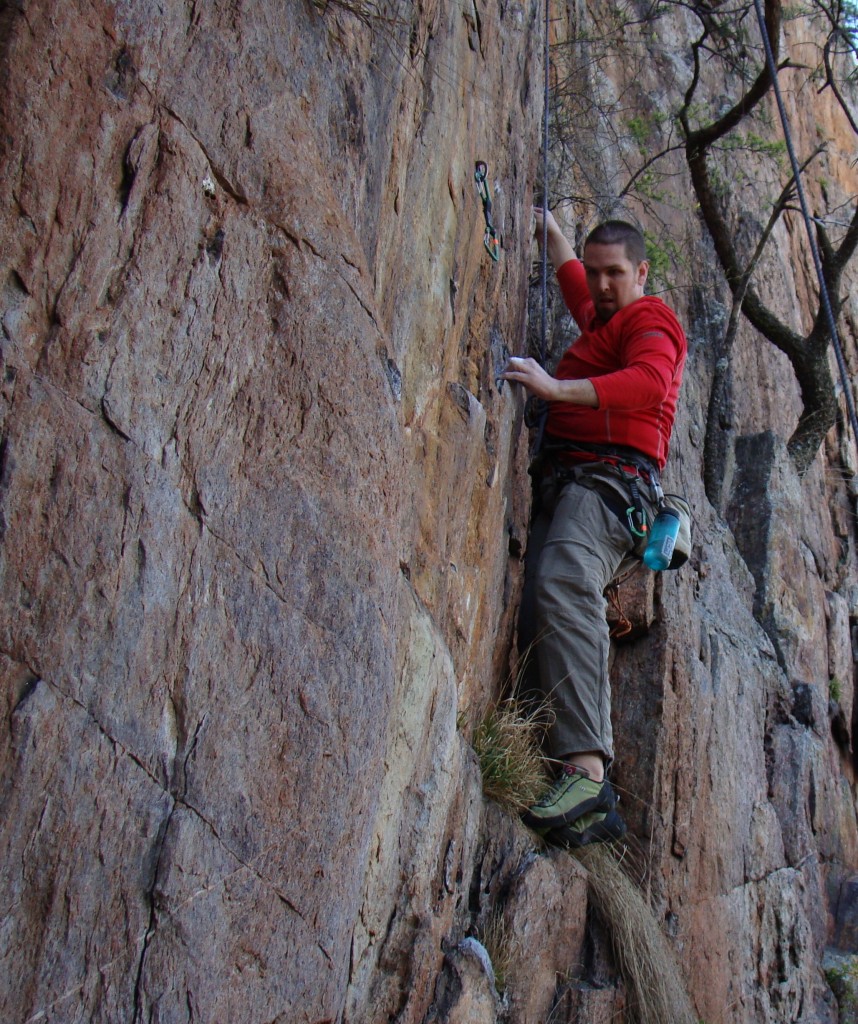 Steve getting started on Desperately Seeking Juggage (5.11b)

I ended my day by cleaning Opinionated (5.9R), which Steve had put up while I was over on Juggage.  I can see why its a classic – a tall, clean line with great exposure up towards the top, with a reward of a spectacular view from the anchors.  There is a substantial runout between the 3rd and 4th bolt, which could easily be remedied with some gear.

Cragbaby got the prize for collecting the most dirt/snot/food/who knows what else on his face.  I’ve heard that you can tell how much fun a little boy has had by how dirty he gets – if thats the case, then C must have been having the time of his life!  His favorite part of the day seemed to be pointing at all the crag doggies we saw, and then calling them “dada.”  (words are still a work in progress…)

C and Daddy goofing around and having fun!

Though Crowder’s Mountain not a destination area by any stretch of the imagination, there are more than a few beautiful quartzite diamonds amidst the chossy rubble!  The rock quality doesn’t compare to Moore’s Wall, the setting is nothing like the remote wildness of the Linville Gorge, and it certainly doesn’t have close to the amount of classics you’d find at the New, the Red, or countless other east coast crags.  But it does have something pretty big going for it that none of those other crags have – its only 35 minutes from our door!  So snub your nose at it and call it a choss pile if you want, but Crowder’s is our home crag now, so I for one intend to make lots of great memories there in the years to come!