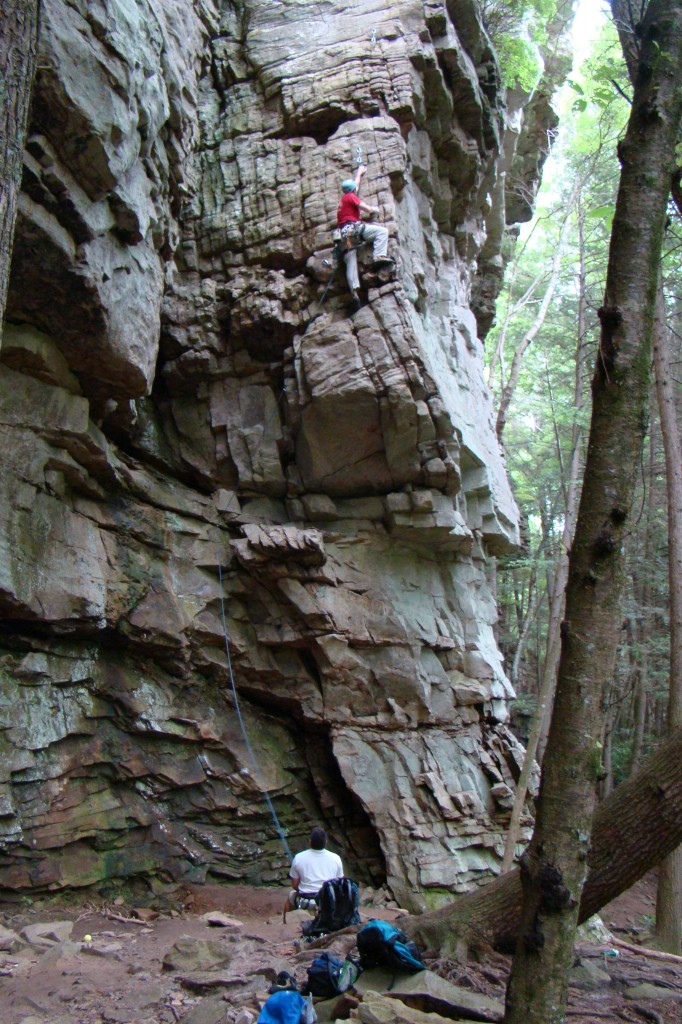 Steve warming up on Tarantella (5.10a)

We set off late Friday afternoon on another weekend climbing trip, this time to the Obed River, in Eastern Tennessee.  The forecast called for a 30% chance of afternoon showers on both days – so of course that meant storms the majority of the day on both days (yet again).  Although I’m relieved that we always manage to make trips more than worthwhile (thankfully once again we were still able to crank hard both days), I’ll be honest that the rain is starting to get old…fortunately this time we didn’t have to spend our evenings hanging out in a soggy campsite.  Since we were arriving so late Friday night and weren’t sure whether our typical “secret” spot would be available or not, we decided to splurge by staying at the newest climber accomodations in the area – The Obed River Hostel.

Let me preface by saying that the Obed River Hostel is not for everyone.  If you are the type of climber that refuses to compromise on your post-climbing amenity needs, you won’t be happy here.  But if you’re a simple soul with an easy-going attitude just looking for a place to lay your head and relax with friends, then this place is for you!   After a long day of pulling on sandstone, it felt good to come “home” to a dry, clean space with a fantastic mountain view!  No need for camp stoves and such, as we had a stove, sink, and kitchen table.  The owner has a 2.5 year old boy, so the lower level was not only child-proofed, but also filled with fun toys for C to enjoy.  The sleeping quarters were on separate floors from the main area, which meant that Cragbaby could snooze away in an upstairs room while we all made merry downstairs.  The best part for us was that there was another climber staying there for the weekend that was in need of a partner – expanding our crew to 5 meant that we could climb as two parties of two (and still have a designated baby-watcher), rather than one party of four, which meant lots more climbing for all! 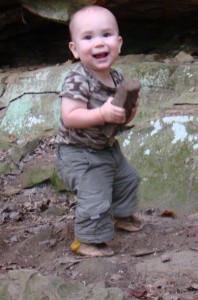 "I found a big one for my collection guys!"

However this is not your typical hostel, and I would be remiss if I didn’t mention a few of its idiosyncracies – its actually a large house that the owner (Erik – a climber and also a very nice guy) built himself.  Erik advertises his home as “an experience in sustainable living,” as it is totally off the grid – made functional by solar power, filtered rain water, and a composting toilet.  This meant that a lot of basic things didn’t work quite the way we were used to (showers, toilet, stove, etc).  All of these little quirks were a bit overwhelming at first, but definitely grew on us once we got a feel for the place.  For those of you wondering about the toilet, it was actually kinda cool – it was ridiculously clean and smelled only of mulch (because after a #2 you’d toss in a couple of handfuls to help with the composting).  The only real downside I saw to it was that it was outside (not a problem now, but my guess is that it wouldn’t be that fun in December).  There also wasn’t any insulation or carpeting – which meant that the slightest noise was heard by everyone in the house.  To be honest I was worried that all the noise would keep C (and therefore everyone else) up all night – but he crashed easily both nights without so much of a peep til the next morning! 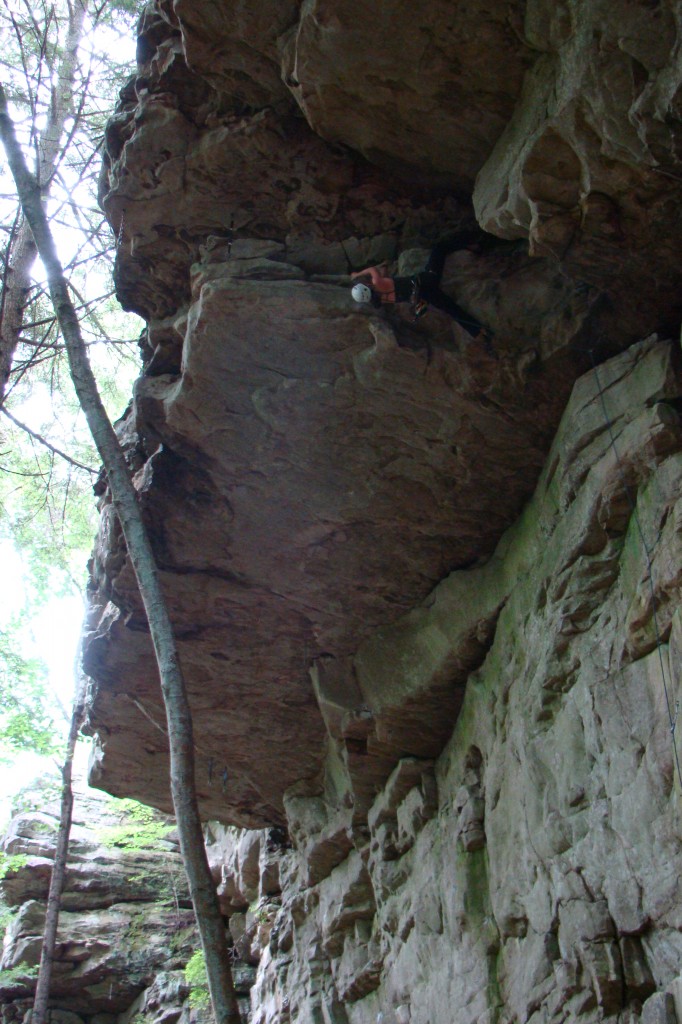 As a whole our group had no qualms about the primitive nature of our accomodations, and although we all agreed that the price may have been a little steep, we thought the hostel added a unique and memorable flavor to our weekend adventure!

But enough about the hostel – on to the climbing!  We ended up spending both days at Lilly Bluffs, and here’s what we hopped on:
Tarantella (5.10a) – a fantastic warm-up  along a tall, airy arete.
Lounge Lizards (5.11b) – another tall and very fun climb, started out on moderate terrain up a flake system before getting steep and pumpy, then finally blasting out a roof slot.  I had to hang to figure out my beta for the slopey crux, and had hoped to give it a redpoint go later on in the day, but the storm soaked the top pretty thoroughly, thwarting my chances.
Clyde the Mega Dude (5.11b/c) – Geez I led this one 3 times and still fell at the crux every time!  The first time it took me a long time to figure out how to make the dynamic move to a big flat jug, the second time I had my hands weird so I didn’t get enough extension to reach the jug initially, and the third time everything went right but by then it was so humid that the jug had turned grimy, so my hand slipped right off, making it difficult to even finish.  I’m pretty sure cool, crisp conditions would make this route way easier.
Ivy League (5.11b) – This one kicked my butt.  Maybe I was just tired but it felt way harder than 11b to me.  I bailed up high after falling twice (and bashing my shin once) trying to make a clip – the bleeding that then ensued caused flashbacks to the Maple Canyon incident…Turns out the clipping jug was farther left and disguised as a bad sloper.
Paraphernalia (5.10b/c) – Very fun!  Steep jug-hauling with plenty of rewards for good footwork! 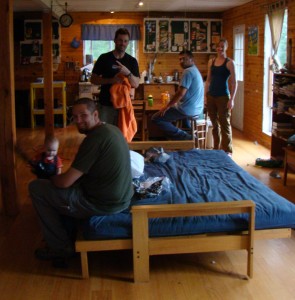 Our crew hanging in the main area of the hostel

Day 2 – Christie and Bennett had to leave by lunchtime, so we decided to get right back down to business…
Lounge Lizards (5.11b) –   The top was dry, but unfortunately I was still too pumped to get through the crux cleanly.  I don’t mind keeping it as a project until next time however, because after I got off this one…I SENT HERESY!!!
Heresy (5.11c) – As Goal #1 from the 2011 Hit List, this route was one of my main objectives on the trip.  I had been disappointed that I couldn’t climb it the day before due to seepage from the thunderstorm, so I was thrilled that not only was it dry, but that I nabbed the redpoint on my first go!  A route this good deserves way more words than this post can afford, so if you wanna hear more about this line, click here for a detailed spotlight!
Alien (5.10d) – An awkward, reachy roof move guards the steep, jug-haul party that awaits above.  Stellar route, and a great way to end the trip! 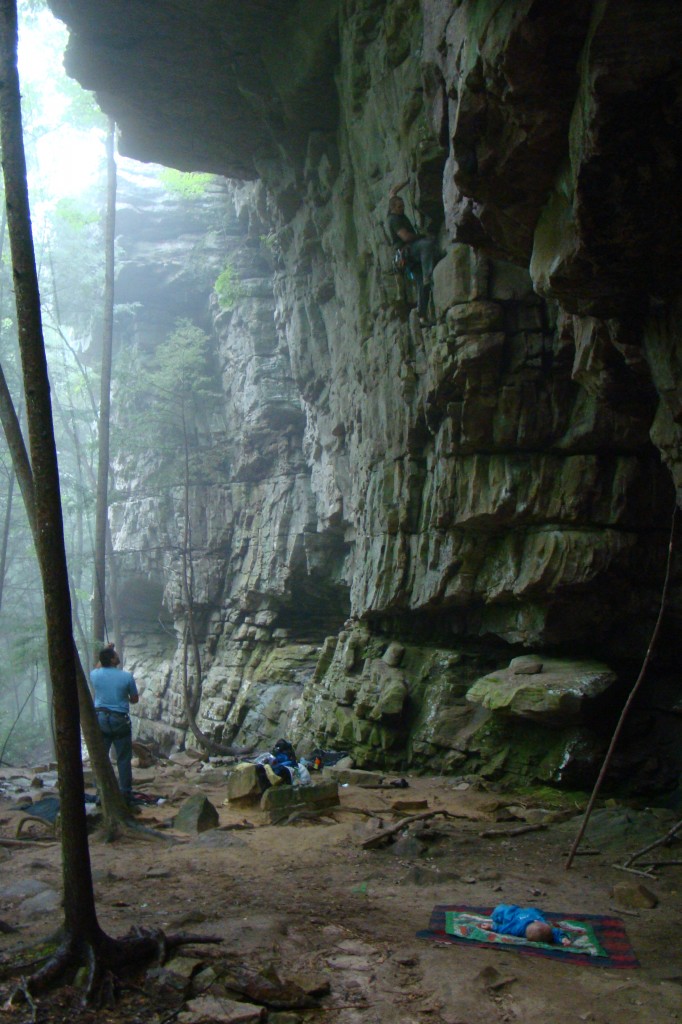 Every time I’ve ever gone climbing in Tennessee I’ve always left feeling both exhausted and motivated. And though  the weather tried its best to ruin our fun, I’m thankful that none of us let it.  I can’t wait to get back there again, hopefully for a longer trip next time!  Oh yeah, and I do have a few more pics, if you’re interested, click here. 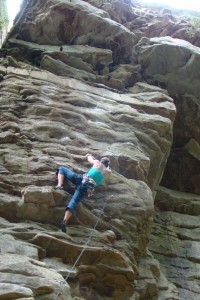 Its almost crux time on Lounge Lizards (5.11b)