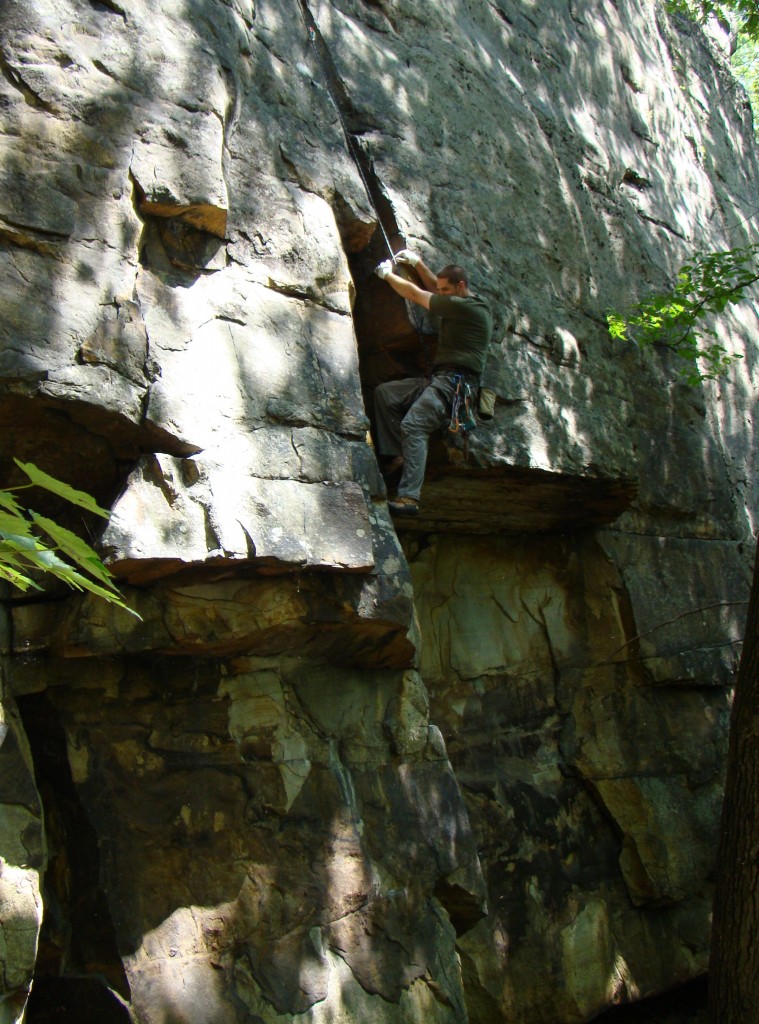 Steve getting started on Fantasy 5.8

Its that time of year again where I get older and wiser, which in our family means we fly north to the New River Gorge to celebrate.  In years past we’ve hit Summersville Lake (for the trip report on last year’s bash, click here), but this year we decided to stay in the gorge and climb away from the crowds.  The weather was (for August), spectacular – temps below 90 with decent cloud cover, and the only rain was in  quick passing showers on Sunday afternoon.  Had we been able to lift off that smothering blanket of humidity, conditions would have been darn near perfect, but I guess we still have a few more muggy weeks ahead of us yet.

Our first day was spent at the Fantasy Roof area at Endless Wall, where we found a great balance of moderate gear routes and long, technical sport routes.  Our usual Endless Wall adventures range from Fern Point to Snake Buttress, so hiking this far down was entirely new terrain for us.  Here’s how the day went: 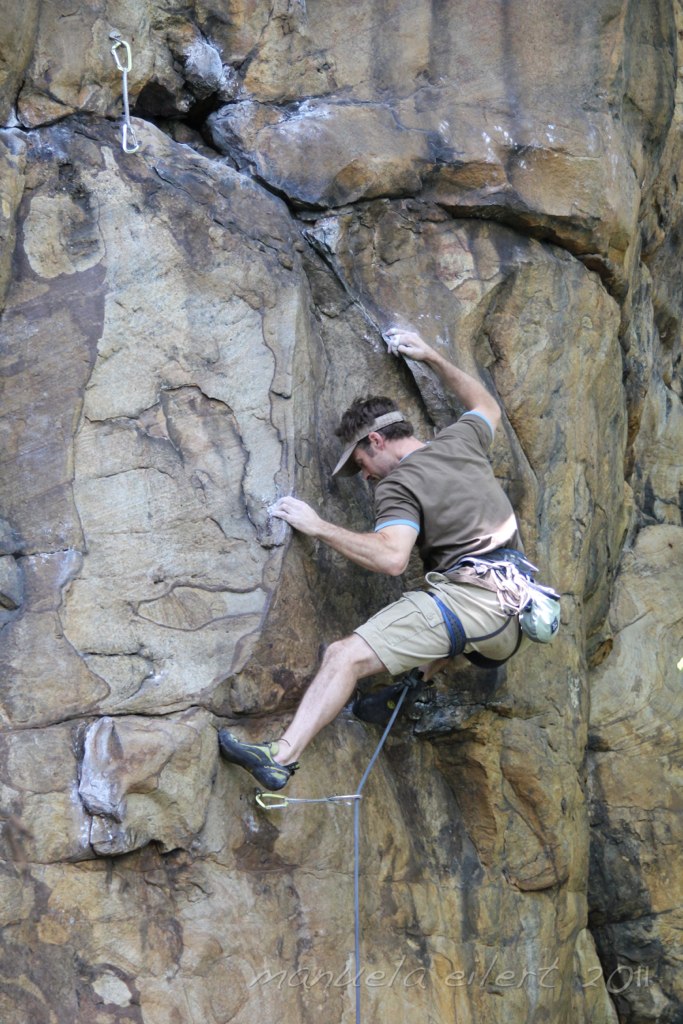 Bennett down low on Aesthetica 5.11c

Day 1 ~
Fantasy 5.8 – This route was worth every star given in the guidebook!  The first 15 feet or so were a little awkward, but once I got over the roof and in the crack, I had 70 feet of hand jamming goodness and perfect gear stances awaiting me.  I stopped at the first pitch and set up a TR for the rest of the crew.
Aesthetica 5.11c – This beautiful line certainly lived up to its name, although I thought it felt pretty stout for 11c.  Once you hit the crux, its game on for the next 20 feet or so – technical high steppin’, and 3 looooong and reachy moves to jugs.  Then comes a good stance to get rid of your pump, which is good since the top is filled with balancy crimpers between rather generously spaced bolts.  I wasn’t exactly sure where the anchors were my first time up, so (just between you and me) I placed some gear above the last bolt…
Black and Tan 5.10a – Another route deserving of its classic status!  The opening moves were balancy, and the first gear placements were higher than I was hoping for, but the rest of the route had good stances, and gear right where I wanted it.  I’m not sure whether the route was exciting, or whether it just felt a little spicy for me because I’m not used to pushing myself on trad.  Either way, this was definitely my most difficult trad onsight to date so I was pretty proud of myself for hanging on even when my feet were cursing at me from the inside of my not-quite-broken-in-yet new Muiras. 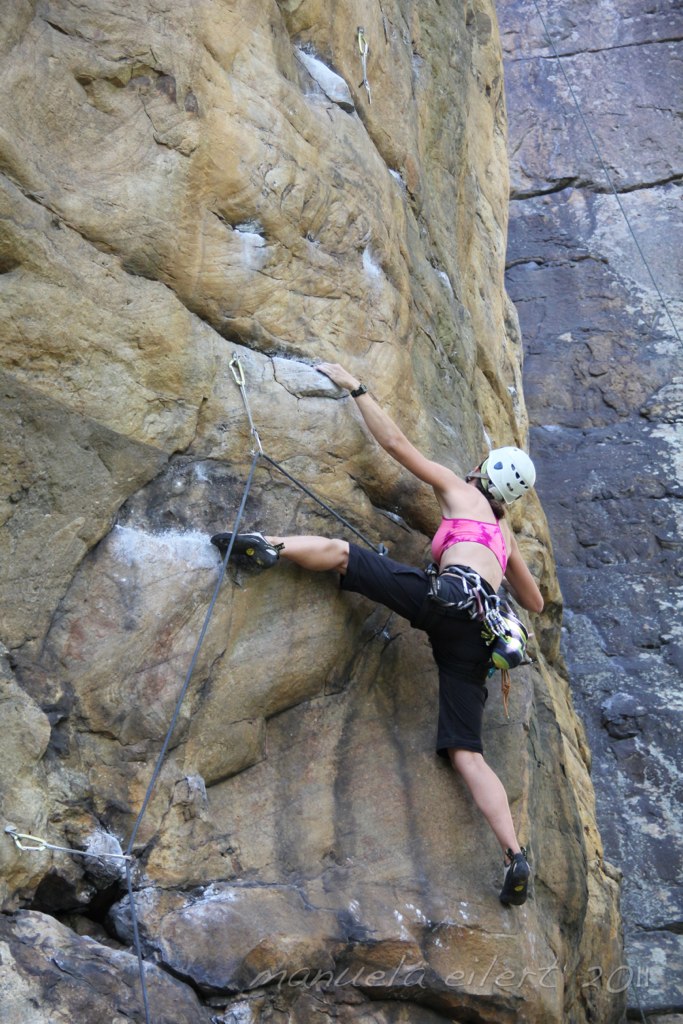 Aesthetica 5.11c – The draws were up so I decided to have another run at this one.  I still fell at the crux, but I was able to work out some new beta that will greatly increase my redpoint odds next time around.
Bonemaster Gear Fling 5.11c – This pit stop right beside the ladders on the way out is hardly worth mentioning. It started off fun – a couple of hard moves down low led to fun, balancy moves on slopey flakes…then the holds ran out, and so did the bolts, so I bailed.

One of the highlights of the day was watching Cragbaby try his best to send the Honeymooner’s Ladders before we hiked out.  He crushed it all the way to the 7th rung completely on his own strength (along with solid technique of course…).  He just kept going and going until finally I had to lift him off because I couldn’t reach any higher to spot him.

Sunday we headed over to Kaymoor, where the Pockets of Resistance Saga continued.
Sand in My Crack 5.7 – I put up this little trad line on the Rico Suave Buttress for some of our posse to play around on, and I must say it was rather enjoyable – a casual laybacking romp up an arching crack system – good gear, good climbing, and would stay dry during a monsoon.  If you happen to be in the vicinity and have your rack with you, be sure to hop on it.
Pockets of Resistance 5.12a – I should actually be listing this 5 times because that’s how many redpoint attempts I had – each starting out strong and optimistic, and each coming up heartbreakingly short at the anchors. 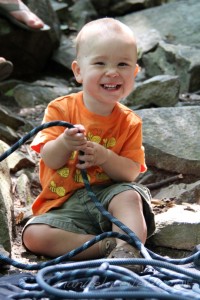 Just some background – One of my original goals for 2011 was to lead a 12a and finish it, thinking i would find something that seemed within eventual redpoint reach and voila!  I could adopt a long term project.  Pockets had been recommended to me by several folks as a great first 12a, and it suited my climbing style, so a few weeks ago I went for it.  I hung at all but the first bolt, but was shocked that I completed it without too much trouble.  It didn’t feel right crossing that goal off my list when the route actually felt sendable, so I decided it was worth trying for the redpoint the next time I made it out there. 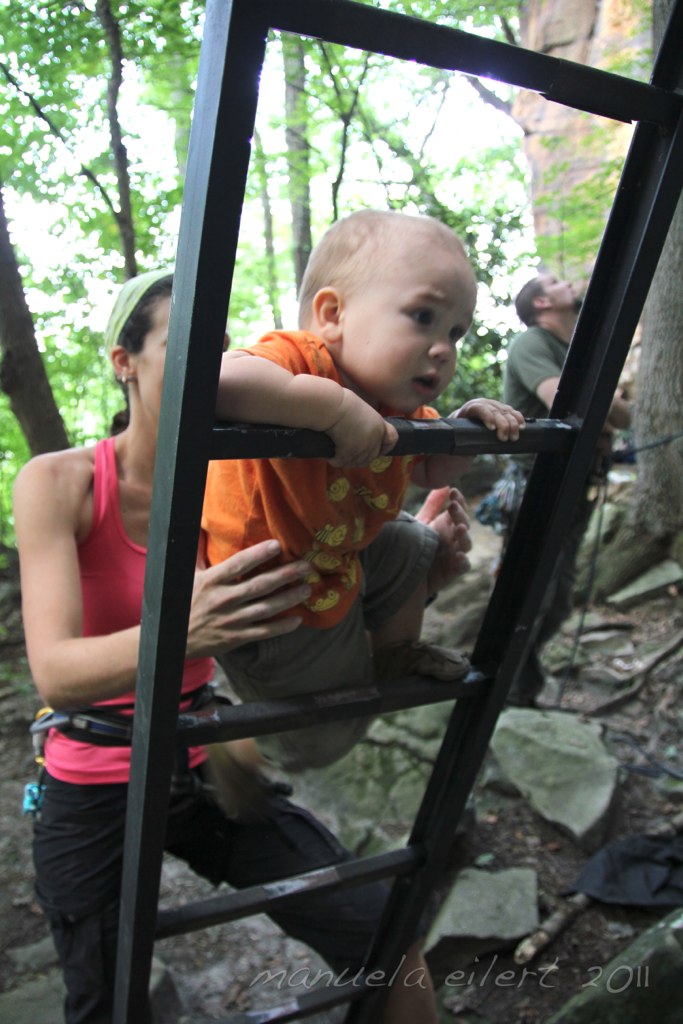 Cragbaby crushing on the ladders

Anyway, this time around it took me a few tries to work out my beta for the hard move down low – a powerful right hand cross over into a slot on high, bad feet.  Once I got that dialed, I was consistently getting to the crux efficiently, where I would then fight hard for it and fail, rest briefly, and then power through the crux move at the first go after the one hang.  My crux beta is solely dependent on a less than .1% margin of error in how I set my right foot on the high divot that is so horrible it hardly deserves to be called a hold.    The problem is that coming in to that sequence from the ground up (how cruel that it happens to be the very last move to the anchors!)  has me so pumped that nicking the exact right spot on that divot with my slightly shaky appendages makes the move seem completely desperate.  After even just a 10 second rest, I can nail it 90% of the time.  I tried 3 times before getting way-laid by a passing shower.  Not to be deterred however, I jumped back on it an hour later for two more tries, although by the last try I was so exhausted that I flailed my way up, falling at stupid places that had never been a problem before.  I even took a whipper while making the last clip, which is never fun. 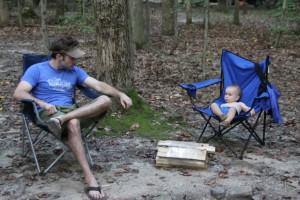 Bennett and C chillaxin’ at camp

Am I disappointed?  Nah.  Of course I wish I could have sent it, but I figure the longer and harder I work for it, the better it’ll feel when it finally does go!  I could sit around wallowing around in thoughts of what I couldn’t do, but nobody likes a Debbie Downer, so I thought it would be better to focus on reflections of what I could do…

1.  “Wired” is an understatement.  I’ve got every hold on this route memorized.  If I can get out there again before I forget it all, I should be able to crank my way right up to the crux again, without wasting any extra gas on the moves down low. 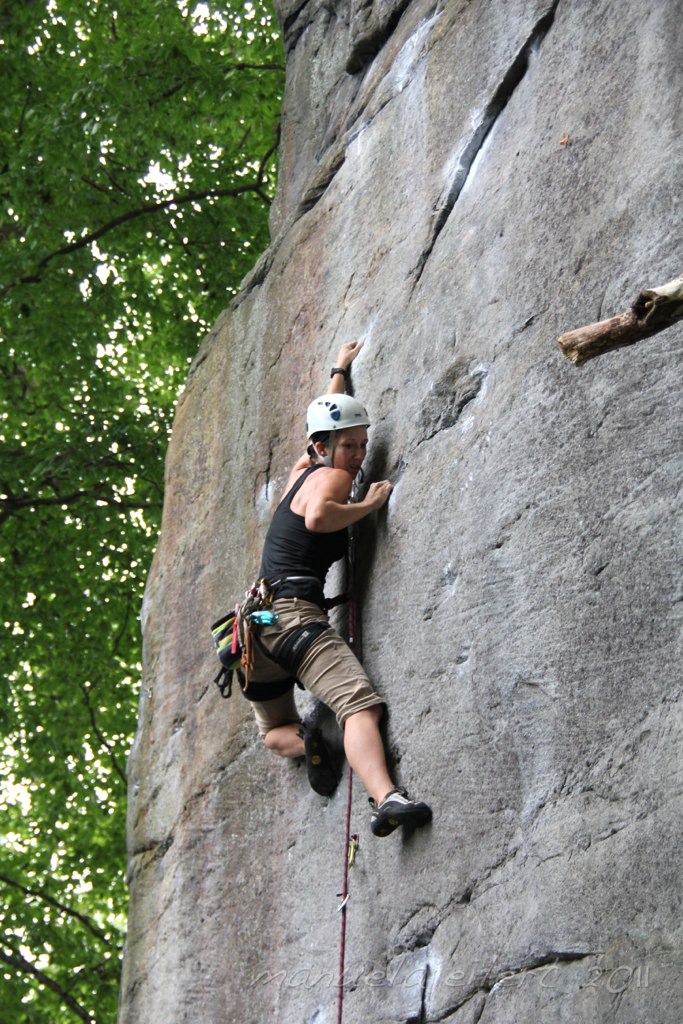 Almost at the crux on Pockets of Resistance 5.12a

2.  I’m proud of myself for giving it so many tries and for not giving up until my body gave out.  This is definitely the most work I’ve ever put into a route in such a short amount of time.

3.  I can’t forget that the original goal was to just get to the top on lead…which I did 5 times within a matter of hours.  The send is really just the icing on the cake.

So when is the next attempt?  To be honest, I don’t know.  There is so much amazing climbing to be had at the New, but unfortunately Pockets is in an area without a lot of moderate lines (sure, Rico is fantastic, but every trip?), which is what the majority of my usual climbing partners are interested in, so it doesn’t feel right dragging everybody else out there just so that I can work that one line.  I would like to hop on it again this fall –  perhaps the cooler, crisper conditions will allow me enough reserves in the tank to paste that blasted foot to the wall (or perhaps I need to abandon that sinking ship and find a different way to do the crux).  Regardless, I have no doubt that 12a will come when its ready.  In the mean time, I’m just gonna keep enjoying life on the rocks with my two favorite boys. 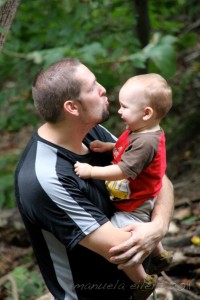 I heart these guys!

Thanks again to Manuela Eilert, my favorite climbing photographer, for capturing all the action for us!  If you want to check out some more of her pics (along with the very few decent ones we managed to get), click here to view the gallery.

13 Responses to “Birthday Bonanza at the New River Gorge!”