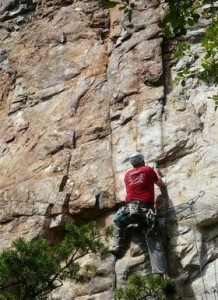 It seems like a lot of our climbing recently has revolved around projecting some harder stuff, so it was nice to take a step back for a day with some local craggin’ on more moderate terrain with a couple of gym rats.  The forecast was for temps in the mid-90’s, but with Hurricane Irene baring down on the east coast, it also called for lots of cloud cover and 25 mph gusty winds, which we figured would neutralize the heat a bit.  Considering what folks just a few hours east of us at the coast were (and still are) dealing with at the time, I certainly don’t want to complain, but I will say that the 2 clouds I saw and the gentle breeze that swept up the cliff didn’t do all that much to provide relief from the heat. 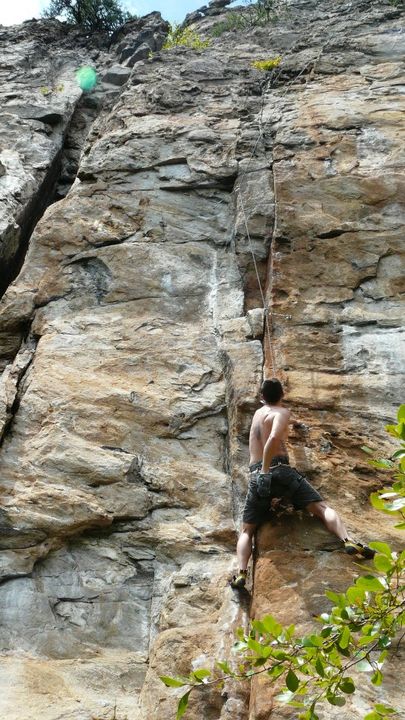 Chuck working his way up Energy Czar 5.11a

It was just as well that we had planned a laidback sort of day – the intense sunshine made conditions more ripe for finding a water hole than for sending anything hard.  We warmed up on Electra (5.10c) and Energy Czar (5.11a), and even at 10 am the sunny wall felt 2 letter grades harder than usual.  By the time we moved down to Red Wall, it was in the shade, so while Cragbaby snoozed in the backpack, we ended our day on Opinionated (5.9) and Master Beta (5.10c).  I’d never been on Master Beta before, but was glad we had time for it, since it ended up being my highlight of the day.  Technical climbing along a series of sharp (and sometimes flexing…) flakes.  Add in the extra excitement of somewhat generously spaced bolts, and you’ve got a tall, delightful face climb that probably wouldn’t be the best choice for the leader trying to break into upper 10’s.

It had been a long time since we’ve climbed with inexperienced climbers, and doing so reminded me of a few things I’d forgotten over the years. 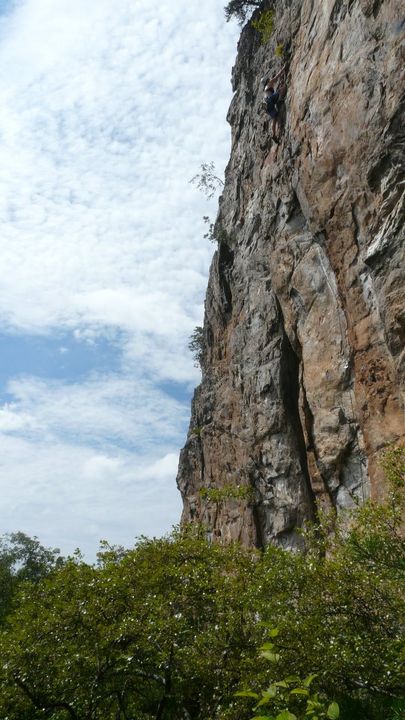 Me high on Energy Czar

1.  Sexual Innuendos – If taken out of context, just about every other word exchanged between two climbers sounds dirty.  When you first start climbing, every statement is surrounded by chuckling and giggling, Beavis and Butthead style.  After a while though, you get so used to the lingo that not only can you tell your partner things like “I was relieved to grab that jug because I looked down and saw that my nut had popped out,” with a straight face, but you’re so accustomed to it that it doesn’t even sound funny.

2.  Summit Fever – These guys were super psyched to get to the top.  It was refreshing to see that they could care less how they got there – it didn’t matter in the least how many times they fell, how long they rested on the rope, or whether they were toproping or leading.  Their enthusiasm was contagious, and it served as a good reminder that the view is rewarding at the top regardless of the style in which you got there.

3.  Information Overload – These guys weren’t complete newbs.  Although it had been a while, they’d both bouldered outdoors a few times prior, and had been climbing regularly in the gym for at least a couple of months.  Even so, I had forgotten just how much extra knowledge and experience you need to have under your belt before your ready to take it from the gym to the crag on your own.

4.  Butt Shots – I’d also forgotten that before you learn how to position the camera/yourself correctly, the majority of the climbing action photographs you take are likely to be more bad ASS than BAD ASS! 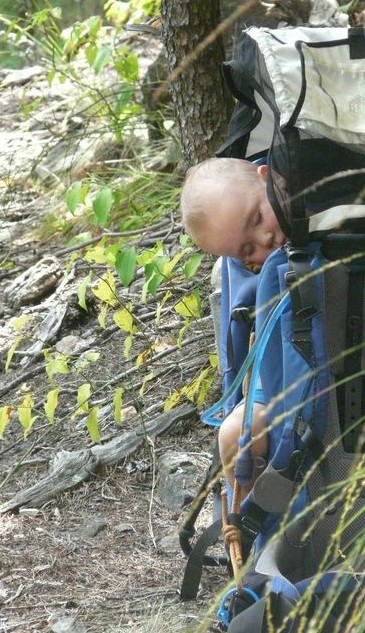 It wouldn't be a trip report without a slumbering C-Squatch photo...

5.  Sprained Egos – Egos tend to shrink dramatically in the absence of tape, grid-bolting, and flat, cushy landings.  One of the guys was engaging in a decent amount of trash-talking on the approach – “A stick to clip the first bolt?  That’s cheating, you shouldn’t use that,” “Fortunately I’m not afraid of falling in the least.”  Call us mean, but Steve and I thought he might need to start his day with a healthy slice of humble pie, and offered to let him hang the draws on our warm-up.  After about 20 feet or so we were starting to hear things like – “I don’t know why I get so jittery when I get over a bolt”, and  “This is a lot taller than the routes at the gym.”  He bailed after clipping one bolt, Steve and I were both satisfied that the lesson was learned.  Thankfully he was a good sport and Steve and I were both very proud of him for leading Opinionated all the way to the top at the end of the day – touchez. 🙂 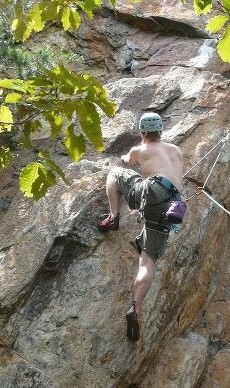 Patrick getting on the sharp end on Opinionated 5.9

Despite all of the good-natured give and take, I think good times were had by all.  Hopefully Chuck and Patrick had a positive experience out on the real rock and might be up for it again some time soon.  After all, we are still somewhat new in town and don’t have an endless list of friends yet.  Hopefully we made a good enough impression to warrant a second date.

7 Responses to “From Gym Rats to Rock Hounds…”