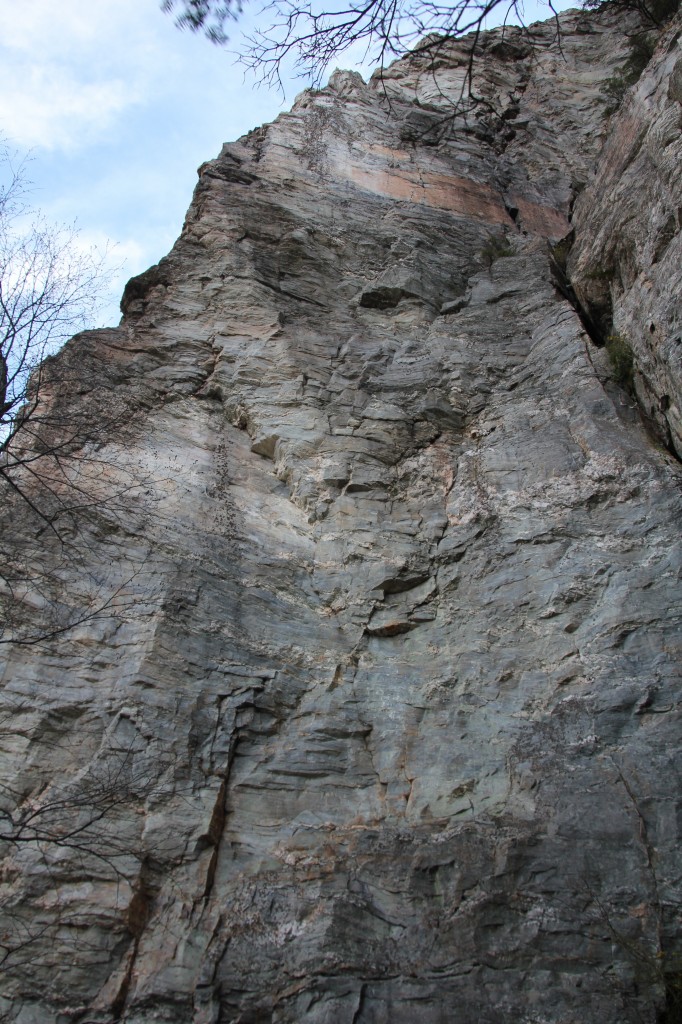 The Fire Wall - home to some of the most impressive, intimidating, and exciting lines at Moore's...

While admittedly that title might be a little extreme, the Moore’s Wall Guidebook Photo Extravaganza certainly did not go as planned. The original plan was to meet up with my favorite photographer, Manuela, on Thursday morning at Moore’s Wall. Our goal was to photograph as much of the cliffline as we could and spend the night with family in Winston-Salem, so that we could not only wrap up route photos on Friday, but also walk the cliff with Carolina Climbers Coalition president Scott Gilliam so that he could show us some undocumented lines. Our plans started unraveling long about Wednesday however, when Friday’s precipitation forecast skyrocketed from 20% to a whopping 90%. Add in a late start Thursday morning, (FYI Facebook directions plus travel in areas without signal coverage isn’t an efficient combo)and we came out with a lot less than I had hoped. Fortunately at least, Thursday’s conditions were stellar, so what we did get turned out really nice. 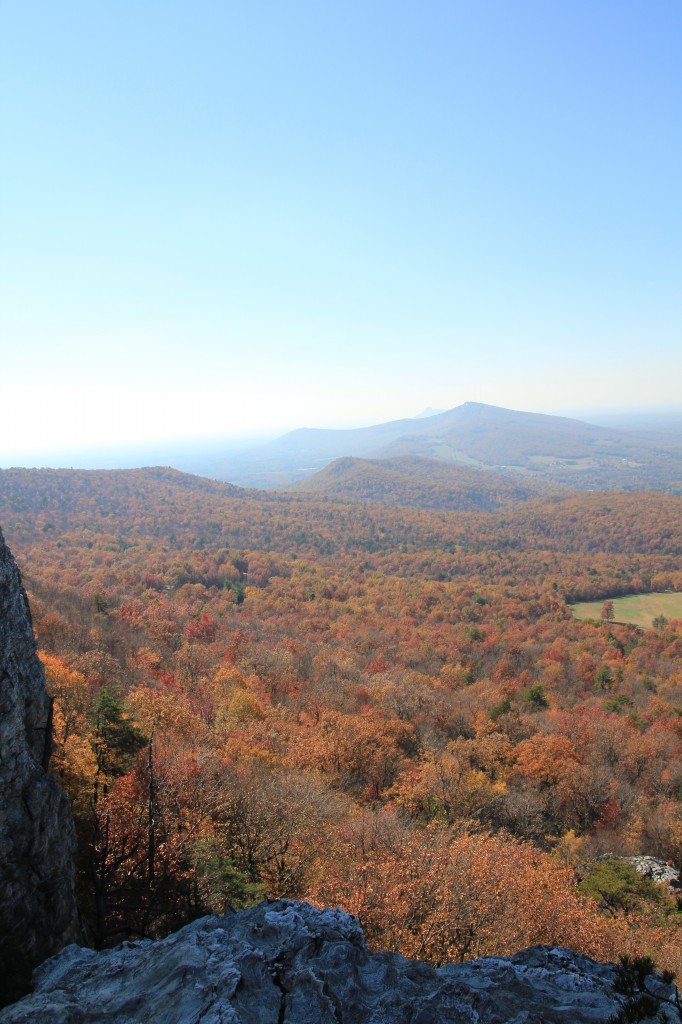 We started our day at the Fire Wall. Our plan of attack consisted of me reading my route description to Manuela to see if she could pick out the line based off what I’d written, followed by Manuela photographing the line from every angle imaginable. Once we got the Fire Wall pretty well- documented, we did the same for the Sentinel Buttress area.

After a quick bite to eat we decided we’d earned the right to put our harnesses on and actually get on the rock. We hopped on one of my favorites, Washboard (5.6), an aesthetic line that provided us with a perfect vantage point from which to photograph the Circus Wall.  For those of you not familiar with the route, Washboard is a lovely little ditty – steep for the grade, great exposure, good protection.  Unfortunately, this line is usually brought up in conversation more because of its controversial descent options than because of its finer qualities.  Here’s the problem – Washboard actually ends in the middle of the cliff on a ledge with a very small pine tree. There are numerous harrowing tales of parties rappeling and even top-roping from this tiny tree.  At this point I assume that most readers who are climbers are raising their eyebrows at this appalling idea, while the NC locals are just chuckling under their breath, too aware of the debate in ethics this little route has sprouted.

So what’s the controversy?  All agree that the best climbing ends on the ledge.  All experienced climbers agree that using the tree is ill-advised.  What many are unable to agree upon is the best descent option.  This route hits an ethic nerve that I have no intention of getting in the middle of with this post, but for posterity’s sake I’ll sum up the opposing sides. 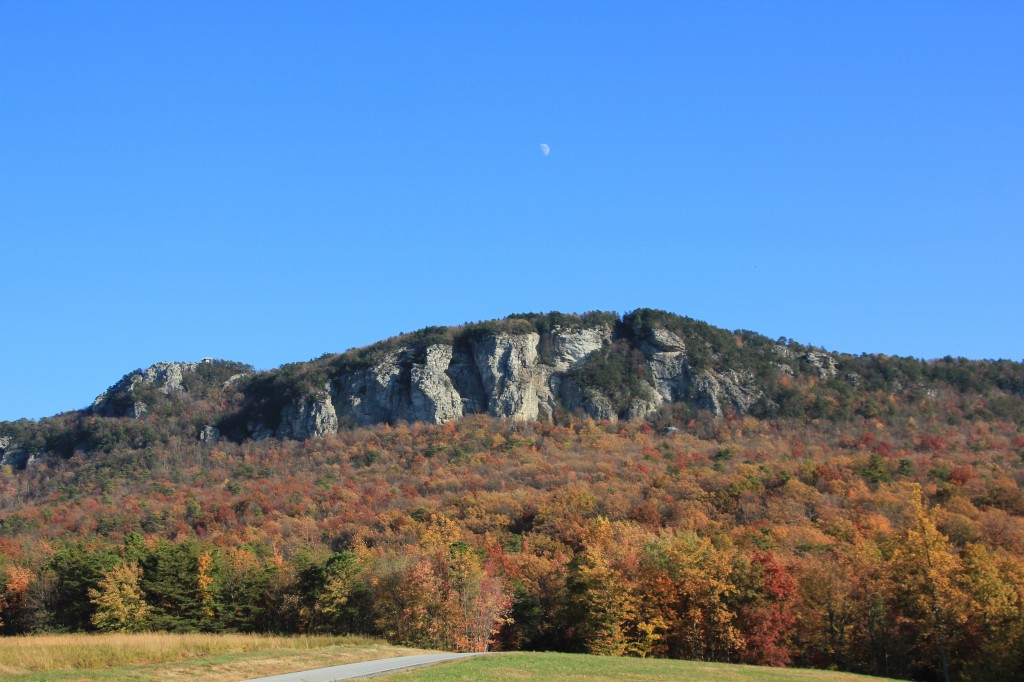 Moore's Wall, as seen from the drive up

BOLTS R US – These guys feel that this line is attractive to beginner climbers (due to the lower level of difficulty and good protection).  They think that putting a bolted rap station at the ledge would be the most convenient option.

ETHICS POLICE – Almost all of the routes at Moore’s were established with a strict, ground-up ethic that shunned fixed protection of any kind.  They would argue that there is no reason for a bolted station at the ledge, since there are several other viable options – continue to either the top or a couple of other hard-to-find rap stations (that some might also consider to be dubious), or solo unroped down easy, but sometimes exposed 5th class terrain from the ledge for about 80 feet. 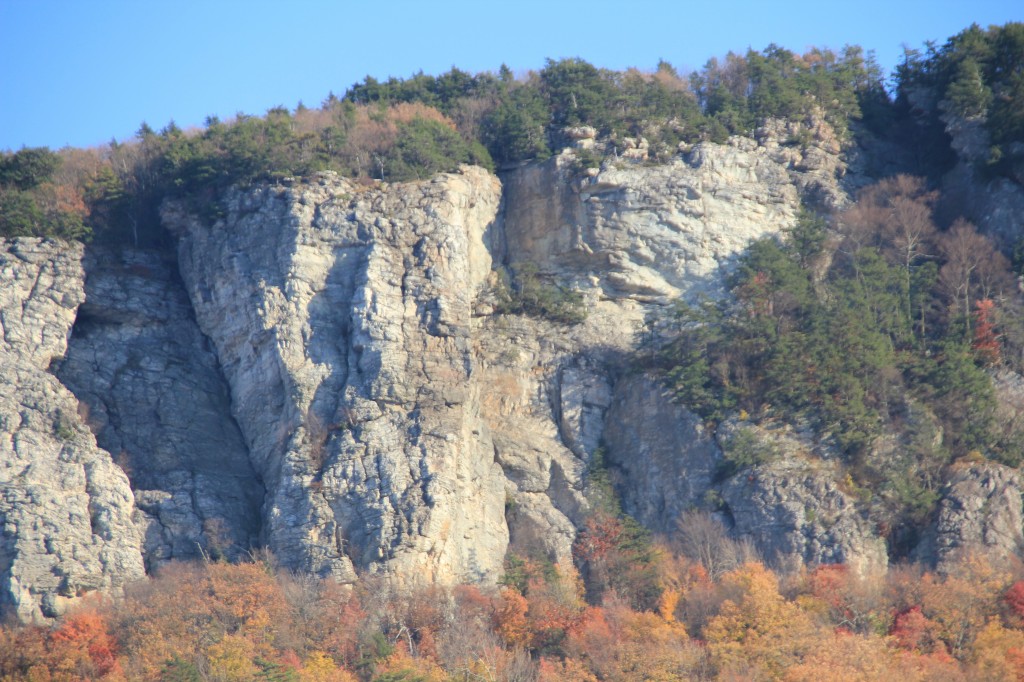 My humble opinion?  I think both sides make good points.  I don’t like the extra time it takes to continue climbing, but also am not a fan of fall consequences being death on the scramble.  For the record, Manuela and I decided to do the scramble, but protected it by “down-leading.”  (We stayed tied in to the rope, and she belayed me down, and I placed gear along the way.  When I got down, I belayed her as she down-climbed and cleaned the gear).  I’m comfortable with that option, and while it takes longer than rappelling, its a lot faster than the other scenarios.  That being said, if the powers that be decided to put in a bolted station, I probably wouldn’t put up a fight.

But enough about controversy.  The fall color was breath-taking, and taking it all in from the belay atop the Washboard ledge with the lone pine tree for company made the entire trip worth it.  When we got back down we realized that the light on the Fire Wall was absolutely stunning, so we re-shot those pics again.

Those of you who are regular readers may be wondering why there has been no mention of Cragbaby up until this point… That’s because he wasn’t there! Completely unrelated to the guidebook project, Thursday also marked an epic milestone for me – the first time in 19 months that I’ve gone climbing WITHOUT Cragbaby!  My mother-in-law (aka “BeBe”, pronounced “BB”) graciously agreed (without too much arm twisting) to watch Cragbaby at her house all day so that Manuela and I could go about our crag-business.  It was definitely a weird feeling.  First of all, I kept forgetting that C was not in my backpack.  Ironically my personal climbing gear coupled with the trad rack and quick draws probably weighed about the same if not a little more than my usual Cragbaby set-up, but being able to cinch it down to a compact size that could fit snug against my back made a world of difference in how heavy the load felt.  (It also helped that the contents of my pack were not reaching out to try and snatch leaves from nearby branches). 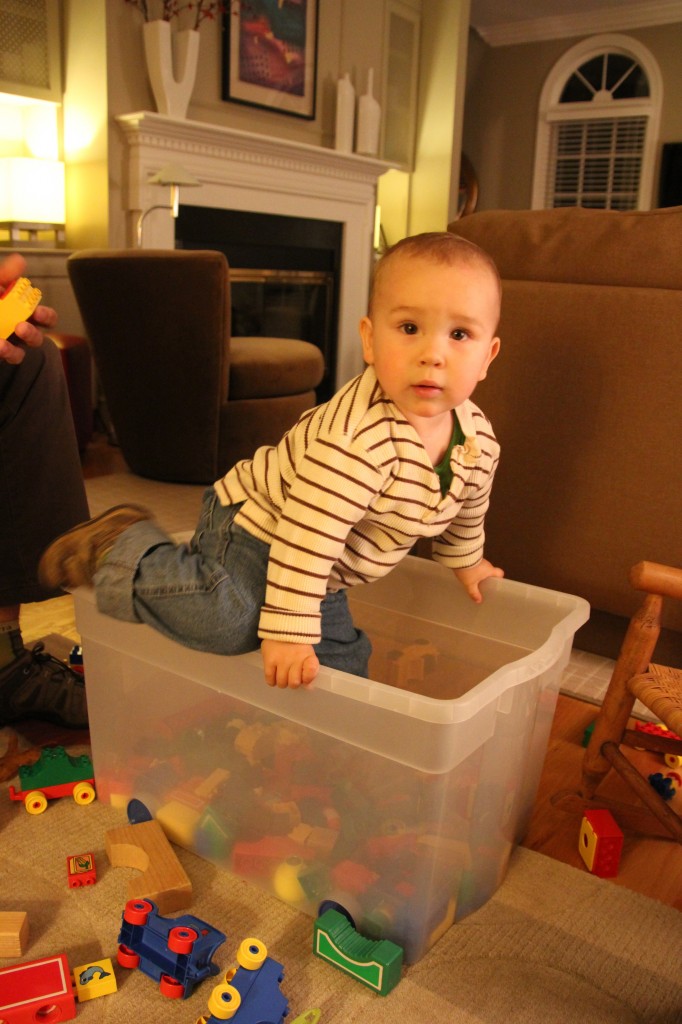 Cragbaby got in some climbing of his own while Mommy was away...

We had hoped to photograph a couple more sections as well as get in a couple more pitches, but by the time we got done with round 2 of pics on the Fire Wall it was approaching 5:00.  Since we were still looking at a 20 minute hike, 40 minute drive back to BeBe’s house and a mommy that was in need of a Cragbaby fix, we brought our day to an early close – but not before getting a great series of shots on the way out outlining the entire cliff line from the road.

I had a happy reunion with C (and his Daddy too, of course!) and we all enjoyed a wonderful salmon dinner a la BeBe that evening.  Since the weather was promising to be nothing but frustrating, we decided to scratch our plans for returning the next day.  Although we didn’t accomplish as much as we had initially intended, we did have a lot of fun, and our weather was more than you could ever have asked for from a north-facing crag in November.  Even though it wasn’t technically a real “climbing day,” it was an interesting experience being away from Cragbaby.  Since C has always gone with us, this was the first time I’d done any multi-pitch in about 2 years (back when I was 5 months pregnant).  I’d forgotten that multi-pitch climbing requires a much different set of muscles than single-pitching.  Had we gotten in more climbing, I’m sure my arms would have been sore from coiling ropes and top-belaying, as opposed to cranking and pulling.

Another tiny detail that I was reminded of was just how amazing the climbing is at Moore’s Wall, since I hadn’t been there since before C came along!  The nature of the climbing there doesn’t lend itself very well to families with young (ie non-climbing) children, since descents for even single-pitch routes usually require all climbers off the ground at one time, leaving nobody at the bottom for little C.  I left on Thursday with a renewed excitement for Moore’s quartzite, and I’m looking forward to getting back there and resurrecting old projects!  As far as the guidebook goes, I am wrapping up first drafts of two of the four areas I will be covering (Pilot and Moore’s).  Since I’ve never done this before its hard to know how to pace myself, but I feel like I’m working on it all the time, so hopefully its fast enough!  (Locals or those who climb in NC often enough to be considered locals, be sure to check out the Carolina Rocks facebook group for the latest discussions, polls, and other such happenings with regards to the new guidebook!)