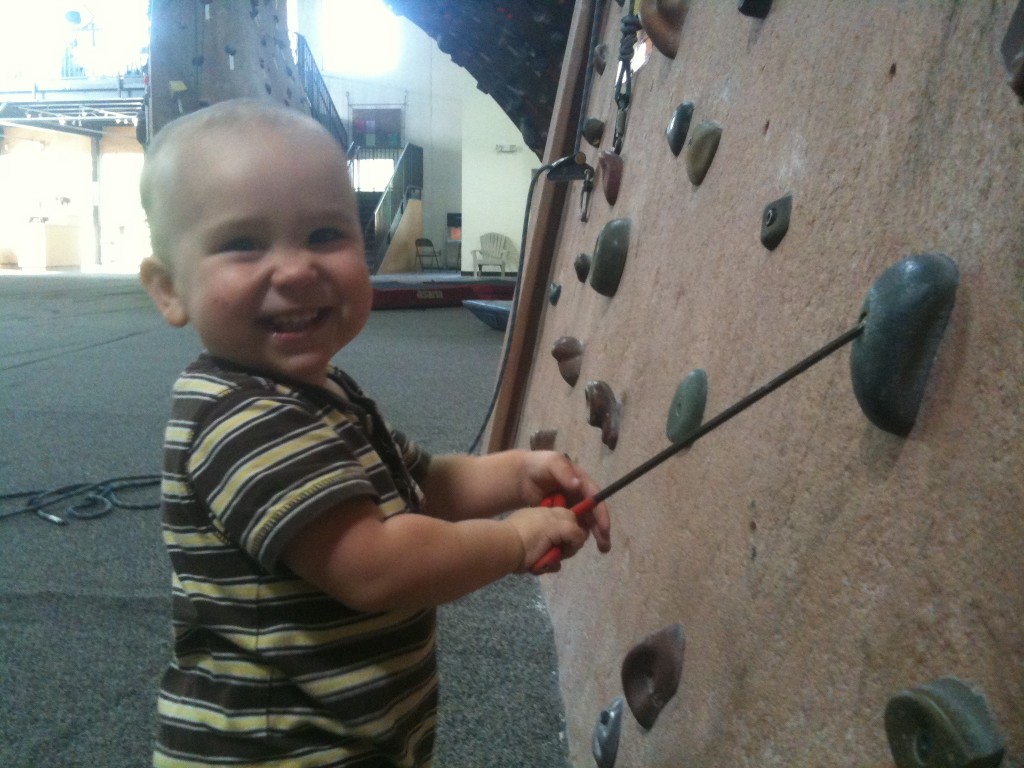 I’ll be the first to admit, it’s hard to get in a good (and efficient) workout at the climbing gym with Cragbaby flitting around like the social butterfly that he is.  The days when we could time our gym time with a nap in a stroller are long gone, as are the days when we could barricade C with crash pads under an overhang.  To be honest, I’ve been pretty indifferent towards the climbing gym for the past year or so.  Yeah it’s a fun place to go, but out of the 4-6 hours that I spend there every week, how much am I really accomplishing?  Rotating around between climbing, belaying, and running around after Cragbaby – a lot of times it seemed like more trouble than it was worth, and I would end the session feeling frazzled and like I had hardly worked out at all.  Ironically, my perspective changed (and so did my workouts!) during my 6 weeks in a boot.  I would mostly hangboard while hubby roped up or bouldered with a partner.  Each hangboard set would take about 10 minutes, and often times C would let me hangboard while he played beside me with wrenches and brushes on a crashpad.  Three hangboard sets as well as a few token boot-leg laps up the steep wall and my forearms were toast.  After 6 weeks I was boot-free and bored to tears with the hangboard, so my husband and I went back to our rotations with a third person (which had to involve a rope since I wasn’t cleared to boulder yet). 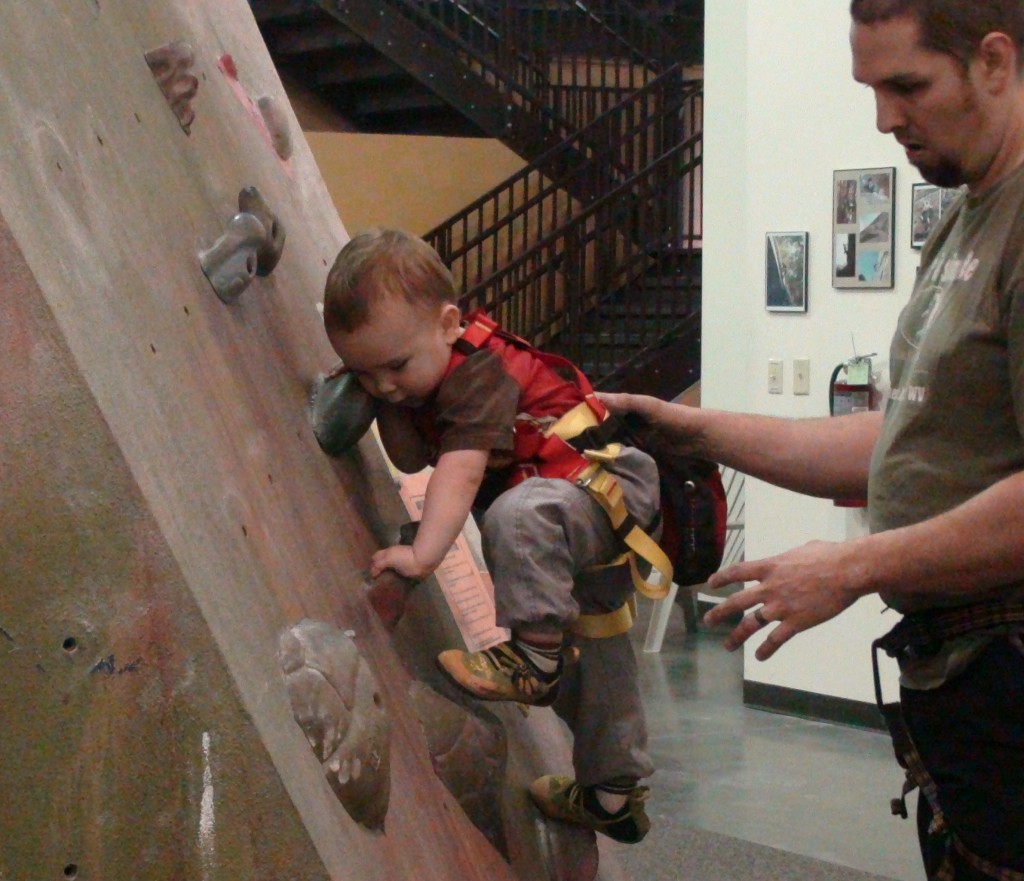 Cragbaby running laps up the down climb for his interval.

As excited as I was to be able to climb with two feet again, I was disappointed that my workouts began feeling inefficient again.  If I flashed a route first try, it meant 2-3 minutes of climb time before going right back to either belaying or watching C for another 15-20 minutes.  I felt bad “working” a route because it made me feel like I was eating into my partners’ climb time.  So our household started brainstorming about different training ideas, and came up with a pretty good concept that seems to be working out pretty well.

Here’s what we do…

Climber 1 gets a 10 minute interval to climb whatever they want.  Climber 2 belays Climber 1 for the entire 10 minutes.  Climber 3 watches Cragbaby.  Then we rotate until everyone has had a chance to climb.  We are able to do this 3-4 times, depending on how early we were able to get started, since we’ve learned the hard way that the Cragbaby turns into a Crag-Monster if we stay there pat 6:45, 7 at the very latest.

There are no hard and fast rules, since everyone is on a different level with different goals, but here are some ideas our posse has played around with during our individual sets. 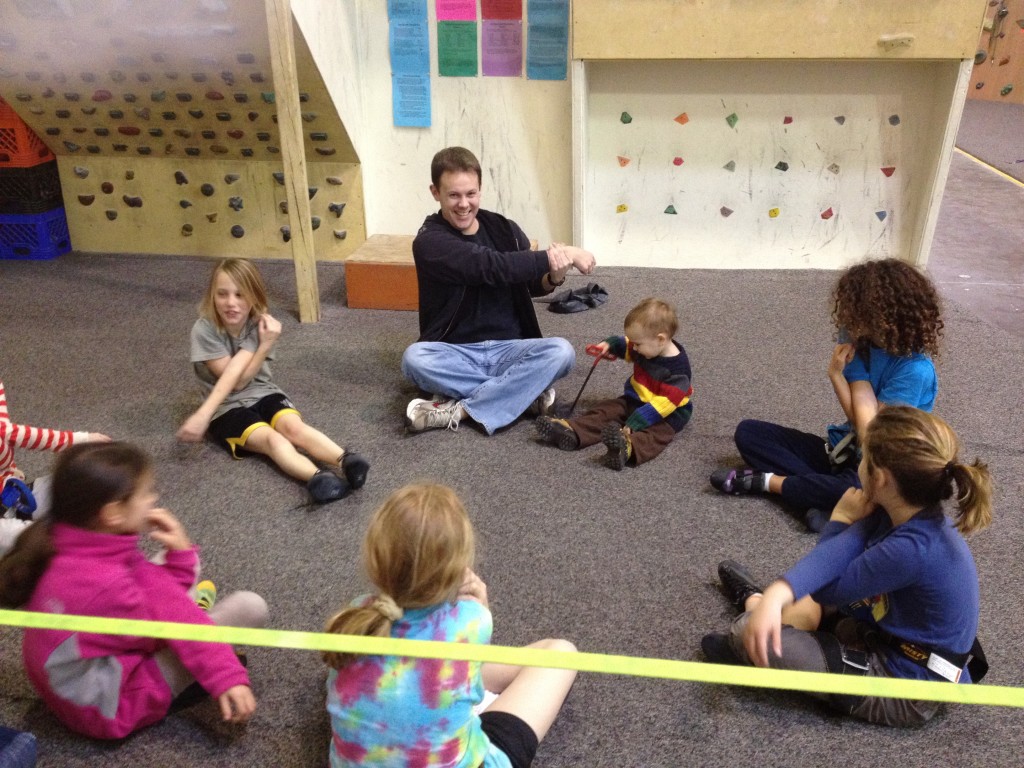 Sometimes Cragbaby likes to warm-up with the climbing team before going about his business.

ENDURO-CHALLENGE:  This one’s my favorite.  We’ve found that its fun (for climber as well as belayer) to channel our inner Hans Florine and Dean Potter and take as many laps as we can in the lead cave without stopping.  Each route usually takes around 2 – 2.5 minutes, so that gives us 4-5 routes, which can pack quite a pump, especially on steep terrain!  To eliminate tying in time, the climber never unties from the rope – instead the belayer pulls the rope from the other end while the climber moves on to the next route and starts, only pausing at the 1st bolt to make sure the belayer has them back on belay.    A fall means lower and either start over or move on to another route, as jugging back up eats up too much time.  The goal is to choose routes that you know well and are moderately strenuous but not at your limit – you should feel a steady pump settling in before you start feeling desperate and begin to thrash around.  Also remember to climb smart – the intent is to build endurance by packing on mileage at a normal climbing rate, not sacrifice form for speed.

TECHNICAL SHOWDOWN:  On vertical, technical routes I can climb closer to my limit for longer periods of time, so the grades  during a technical set are often higher than in a lead cave set.  Just like with the endurance set, 4-5 routes is the norm.  I often find that during a technical set I don’t “feel” pumped, but by the end of the set I can tell I’m wiped when my form starts getting sloppy and my footwork gets far less precise.  The goal in a technical set is to stay on the wall as much as possible, so I usually try to downclimb, even if it means going down a neighboring (easier) route than the one Icame up.

I LIKE THE WAY YOU WORK IT:  Sometimes I go in to the gym with every interval set planned out, only to discover that half the wall has been stripped for setters to put up new lines.  Or sometimes we walk in to find a smorgasbord of new plastic to pull on.  On those days it’s nice to dedicate one of your intervals to projecting a single route that’s approaching your limit.  Get it wired and then next time you can throw it into the rotation for one of your other intervals. 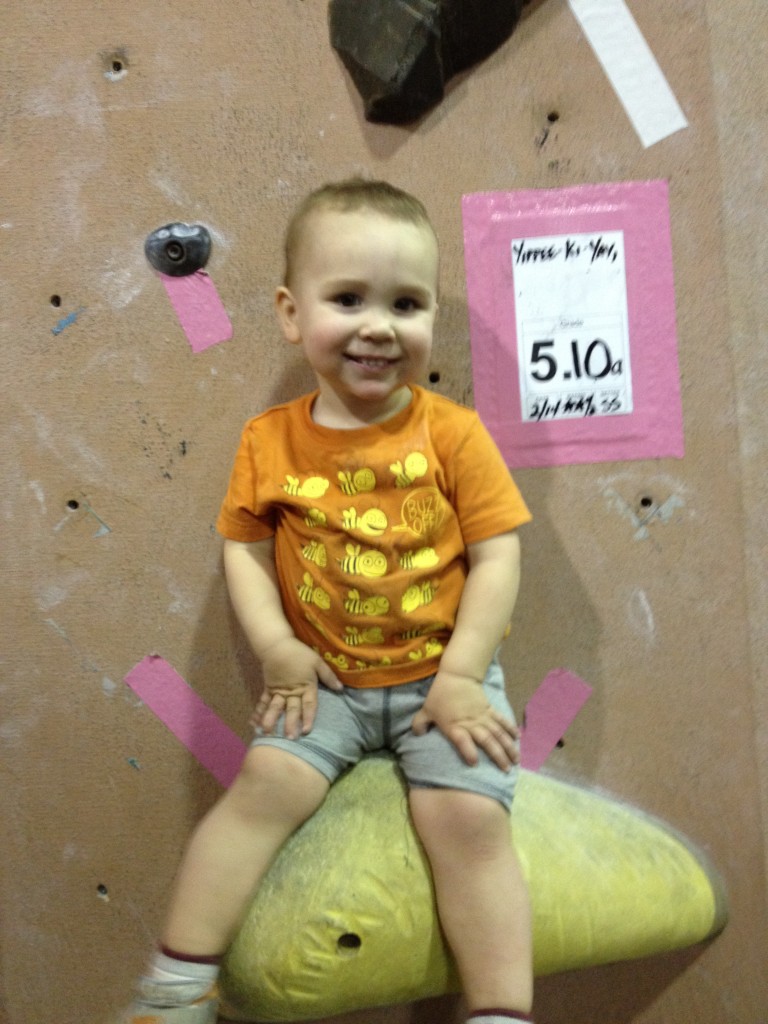 Gym intervals are also a great way to simulate outdoor projects. Your project may have one definitive, stopper crux; or the crux might be just hanging on long enough to link up all the moves.  Often times an outdoor route will have varied movement and style throughout the climb.  Think through the moves one by one, and plan your interval accordingly.  For example, does your project start out on a crimpy, technical face and finish with a bang out a steep roof?  Start out with a couple of hard, vertical routes, then move quickly into the lead cave and see if you’ve still got enough gas to clip the chains at the top.

The idea of interval training is certainly nothing new, but we’ve found that it can be especially helpful and efficient when there’s a cragbaby involved, since it emphasizes quality over quantity, and easily accounts for cragbaby duty.  By the end of the night we’ve all gotten in 30-40 minutes of intense climbing.  It might not sound like much, but if you’ve planned your intervals right, that’s more than enough!  The first time we did it we were all worthless by the time our 4th rotation rolled around.  The only downside I can see is that the concept falls apart when the gym is crowded…realizing mid-set that someone is already on the route you wanted to do next can cause a kink in the plans and give you a detrimental rest time while you try to find a back-up.  So it’s probably not the best option for a Saturday morning session (but hey, that’s when you should be climbing outside anyway 😉 )  Another possible downside is that it requires an extra person – but if you are roping up at the gym with a toddler, then odds are good that you probably already have that in place.

So there you have it.  A quick and dirty way to manage your cragbaby and your workout!  I would love to hear the game plans of other crag families, so please, feel free to share!  Oh, and sorry for the lack of climbing photos…  I figured that any relevant pics would simply look like me and my friends climbing at the gym, which you’ve either seen already, or can imagine easy enough.  For a hot minute I thought about leaving a camera up on a tripod in the lead cave during an endurance set, then speeding up the footage, but I never got around to it, so I opted for the “here are cute things that Cragbaby does while we climb” theme…