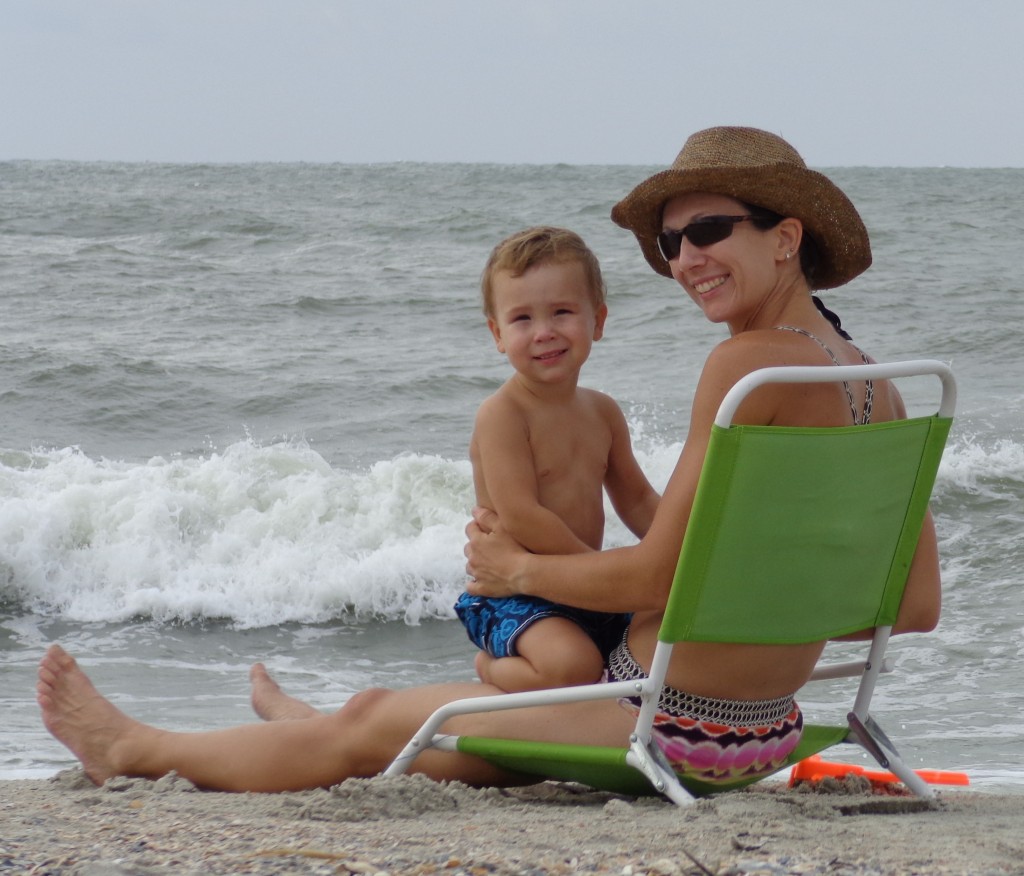 Most people have a firm allegiance to either the mountains or the beach.  Although our family casts a no-brainer vote for the mountains, I think its healthy to change things up a bit every now and then, especially for Cragbaby.  That being said, when the grandparents planned a coastal rendezvous for the whole family, we were all in and looking forward to a good time!

And a good time we had indeed!  In fact, we encountered a good many things at the beach that we never would have run into in the mountains.   So rather than bore you with a play by play report of our daily shenanigans, I thought it would be fun to sum up our trip with a list of things you can find at Ocean Isle that you WON’T find at our usual escapades above sea level…  (But if you really want a play by play it would go a little something like this – 1.  Beach.  2.  Nap.  3.  Beach. 4.  Sleep.  5.  Repeat.  The only deviations came when the waves were either exceptionally good, or the weather was exceptionally bad.) 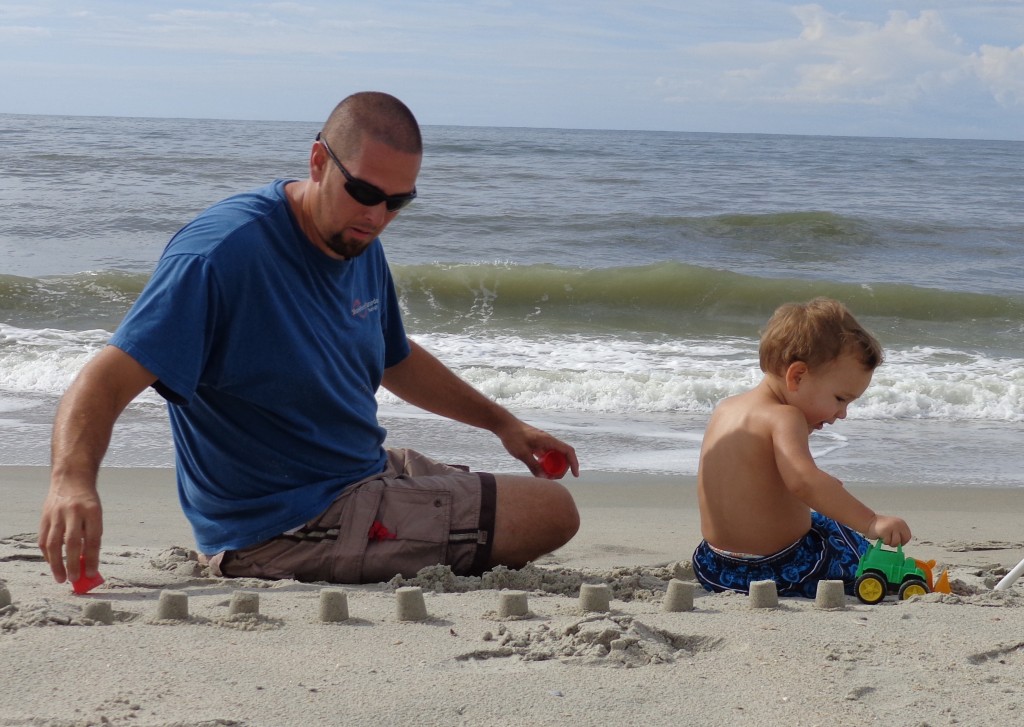 10.  CHEESY HOUSE NAMES – While there are a few restaurants and a couple of shops on the island, Ocean Isle is a far cry from the commercial mayhem lying just 20 miles south at Myrtle Beach.  Aside from the handful of smallish condominiums, the majority of the housing consists of quaint little beach cottages.  Each one is different from the next, and almost all of them have quirky little names.  Discovering all of the little puns and plays on words during my daily jog routine with the hubby was definitely a highlight each morning.  My favorites were “SeaDuction,” “Conch’d Out,” “Looney Dunes,” and “Vitamin Sea.”  Since running usually kicks my creativity into gear, the writer in me couldn’t help but brainstorm names for a climber-friendly cottage by the sea – the best ones I came up with were “Beach Bivy,” “Cragrats Cove,” and the dorky but possibly endearing “Yo-sea-mite.” 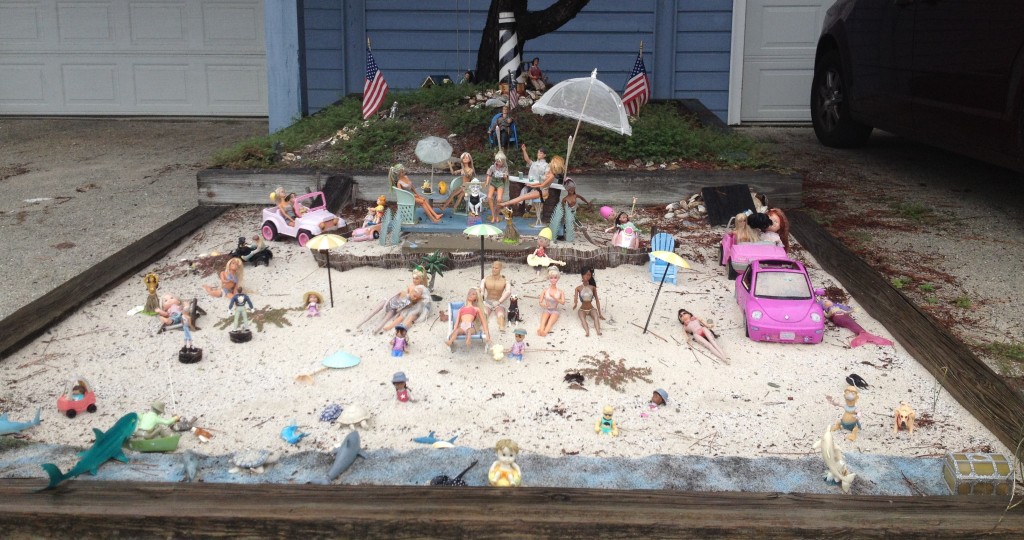 9.  KEN AND BARBIE BEACH SCENES – Stumbled upon this “display” on a morning jog…not really sure what to say about it, except that it was both fascinating and disturbing at the same time…and I’ve definitely never seen the likes of this in the mountains (or anywhere else, for that matter).

8.  HERMIT CRABS – C learned about hermit crabs (and various other sea creatures) at the “touch tank” at the Coastal Carolina Museum, which we hit up on a rainy morning.  Along with the touch tank, the museum had life-size exhibits depicting sharks, fish, turtles, and sea birds, as well as a room with puzzles, puppets, and books.  C enjoyed himself so much that we decided to let our beach memories live on through “Hermy,” the newest member of our family (who was free with purchase of a cage…)

7. FRESH SEAFOOD (and someone that knows how to cook it) – The meals we make in the mountains generally have only one goal in mind – refuel.  Taste is often secondary, and presentation is certainly not even considered.  Not so at the beach!  I wouldn’t be surprised if we all gained a few pounds from all of Bebe’s wonderful cooking, but every now and then that’s okay, right? 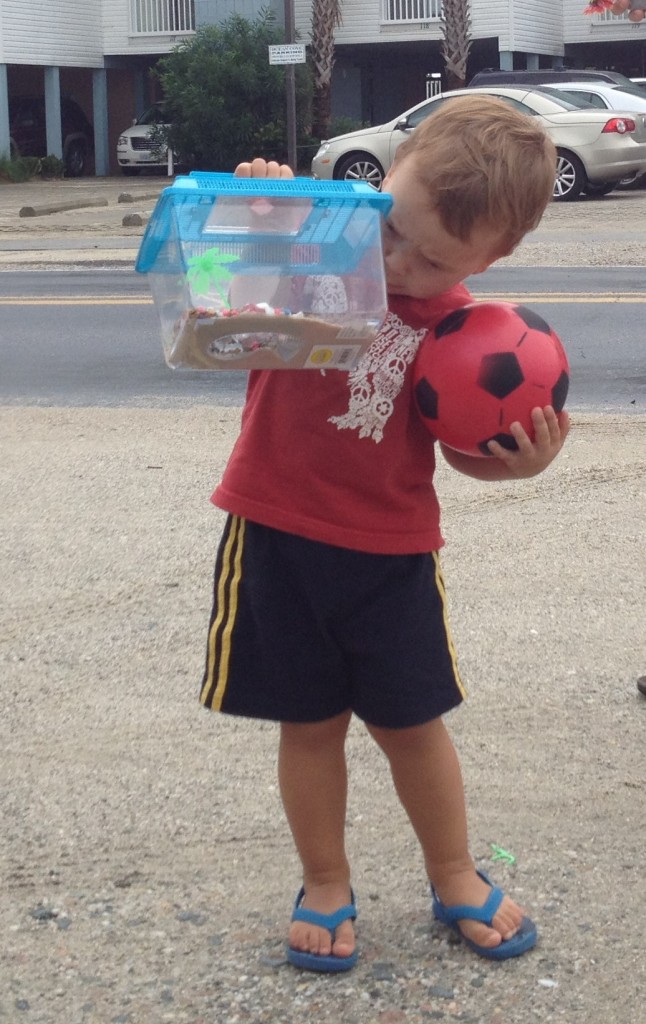 C and his new hermit crab

6. A SEPARATE ROOM FOR CRAGBABY – Family snuggles in a tent are certainly sweet, but it was a welcome change of pace to be able to share a bed with only the hubster (that is until 3:30 am almost every night, when C would randomly wake up screaming and subsequently hop in between us for the rest of the night…)

5.  RAIN SUCKS…BUT ONLY WHEN ITS RAINING.   If I had to choose for a rainy week at the beach or a rainy week at the crag, hands down I’d choose a rainy week at the beach.  It rained at least once every day we were there, but it didn’t completely decimate our plans the way it can at the crag.  After all we had a big, dry house complete with a covered gazebo to wait it out, and we were a 30 second saunter from the sand.  No desperately combing through a guidebook trying to find something dry – as soon as the rain stopped, even if it was just for a short window, we were good to go!

4.  FAMILY – Don’t get me wrong, our climbing friends are the best, and most of them close enough to consider family.  But it was nice to be able to share some outdoor recreation with C’s grandparents, aunt, uncle, and especially his cousin.  In this case double the toddlers meant double the fun, and it was awesome to watch the two of them discover and learn so much together (and then hear them jabber back and forth about it in senseless toddler talk at the dinner table…) 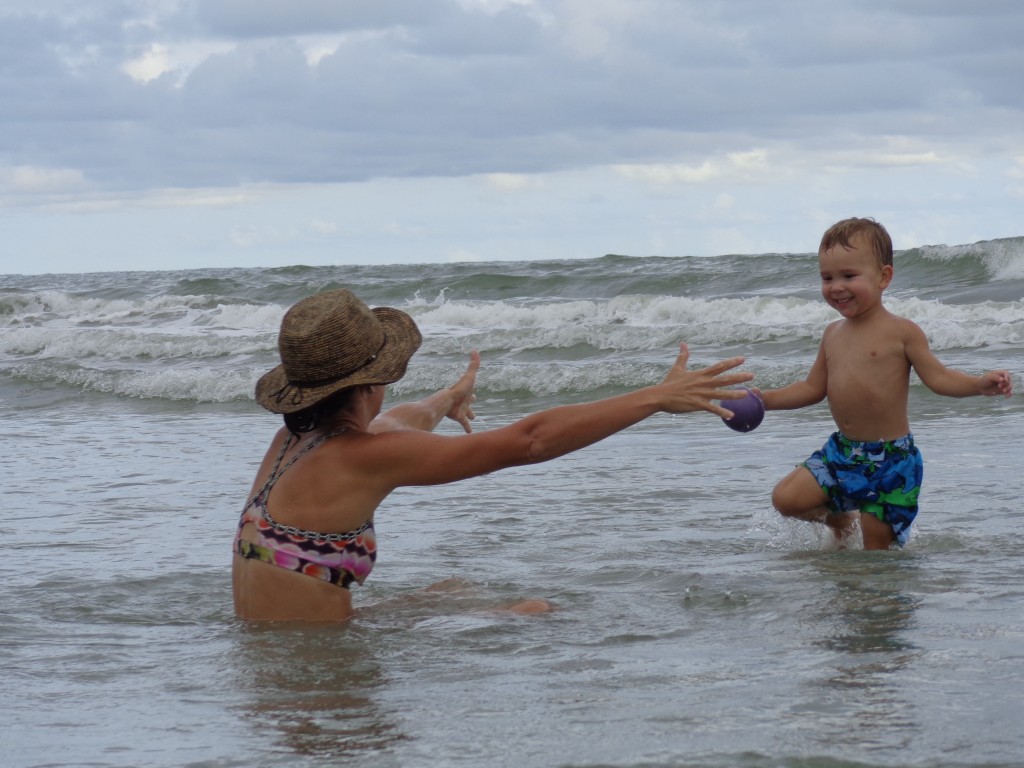 3.  SEASHELLS – We brought them back by the bag fulls!  Not sure what we’re going to do with them yet (ideas welcome!), but I’m hoping to incorporate some in our garden, and maybe get in a few toddler-friendly craft projects.

2.  WAVES – Big ones for the grown-ups to take turns riding in the mornings and at nap times, and small ones in the afternoon for C and his cousin to splash around in.  It was cute watching both little boys start out the week rather timidly, and get just a little bit braver with each passing day.  C had been out past the breakers a few times with us prior in the week, but it had taken a lot of convincing, and was always short-lived.  Most of his “ocean time,” however, was spent hanging out in the shallows at low tide, jumping and splashing around in the “baby waves” (as he called them).  But one of my highlights had to be on Thursday afternoon at the end of the day, when C just up and grabbed his inflatable dolphin and marched right out to sea!  I’m not sure what came over him, but he just floated over wave after wave,  even “riding” some in to shore just like Mommy and Daddy!  At one point we had to drag him out of the ocean for dinner.  Unfortunately the weather didn’t lend itself very well to swimming the rest of the week (read: rainy or too cold to actually submerge), but I was very proud of C for turning his fears into fun! 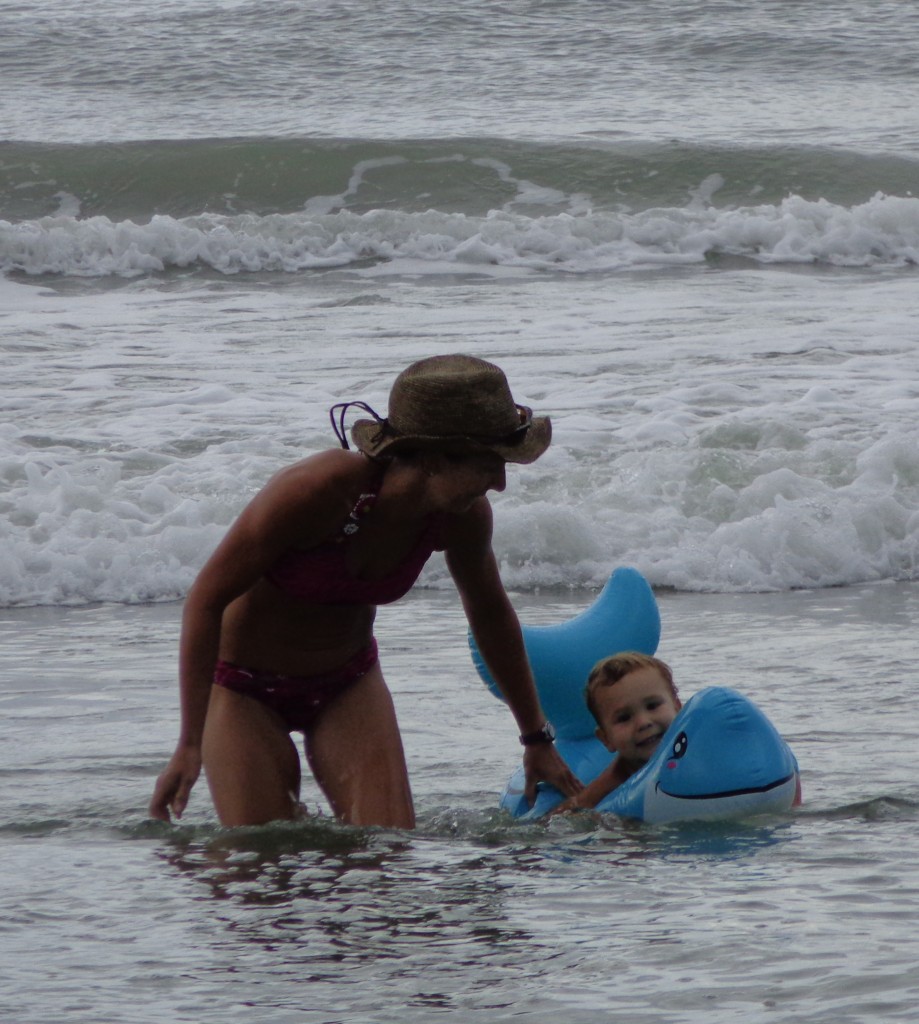 1.  SAND – Wow.  The amount of sand a toddler can accumulate in his swimming trunks after just an hour at the beach is outrageous.  And the amount of sand that same toddler can deposit onto his loved ones is equally unreal.  Fortunately for us Cragbaby liked the de-sanding process just as much as getting sandy.  But I still have a feeling that I’ll be washing sand out of our clothes for at least a week or so…

But despite all the new and interesting sights and experiences to be had at the beach, I discovered an interesting thing about my sweet son…YOU CAN TAKE THE BOY OUT OF THE MOUNTAINS BUT YOU CAN’T TAKE THE MOUNTAINS OUT OF THE BOY.  Let me elaborate.  Like most toddlers, C spent a good bit of his beach time digging and building in the sand.  One morning he’d worked particularly hard on a steep mound of sand, carefully adding sand to certain parts, and patting it down to keep it nice and smooth.  I asked him what he was making, and without hesitation, he looked up at me with a big smile and said, “That’s Devil’s Tower!”  And with that, I knew that all of our hearts still belonged in the mountains. 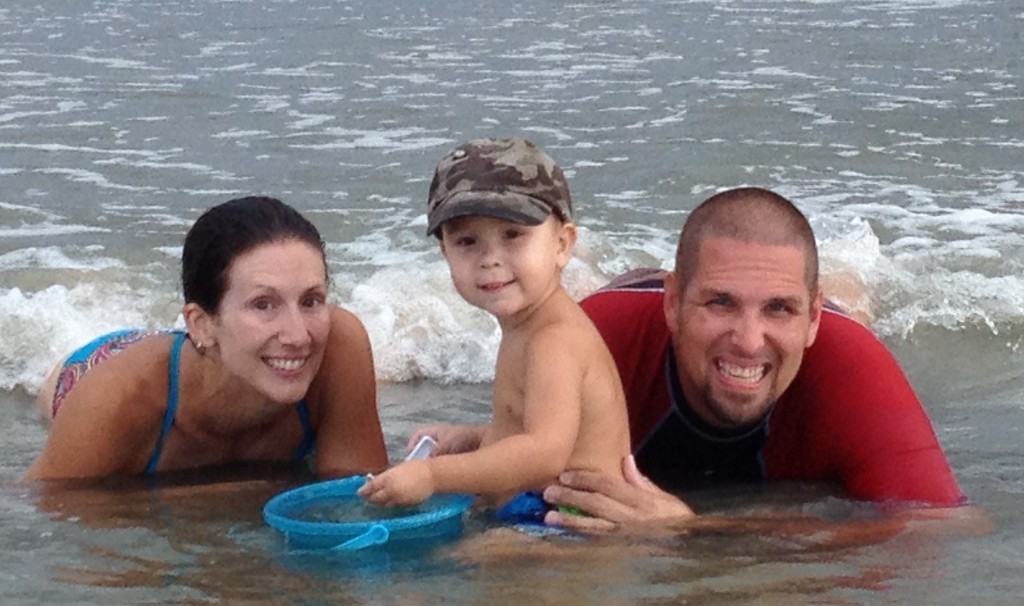