We  couldn’t have scripted a better ending for our trip than the spindly little spires surrounding Custer State Park, also known as the Needles.  The tiny, airy summits provided more than enough reward and motivation for 4 (and a half…) climbers to get off the ground one more day.  And the long runouts over moderate terrain was ideal at the end of the week when lead heads were secure but our bodies were tired.  The word that best sums up the climbing at the Needles is FUN!  For me, it was an experience with a distinctive child-like quality to it.  We basically just meandered our way through the spire-laden landscape, stopping to climb whatever looked like it’d be fun to stand on top of.  Consulting the guidebook was at a minimum, nobody had any specific goals about grades or number of routes to squeeze in.  We were all just happy to spend the day in this seemingly enchanted forest.

We started out at Sylvan Lake, but the water was a lot more enticing than trying to figure out where the climbs were in the maze of granite tucked away behind the monoliths.  Cragbaby was the only one brave enough to take the plunge (I can’t begin to tell you how cold the water was…), but we all had fun darting in and out of the rocky outcroppings along the lakeshore.

Mid-morning we packed up shop and headed to the Needle’s Eye parking lot…just in time to see a giant RV squeeze through the infamous tunnel with only inches to spare on either side.  The climbing in this particular area was reminiscent of a three-ring circus – and we soon realized that we were an integral part of the show!  The climbs are literally IN the parking lot – as in, we belayed from the asphalt – and it only took a few rather observant fellows to notice all the gear before a large crowd had gathered, with iphones, cameras, and camcorders at the ready.  While it was a bit unnerving climbing with such a large audience, I quickly realized that it didn’t take much to impress.  One group in fact, was rather incredulous that I was “choosing not to wear my kneepads” on my ascent. 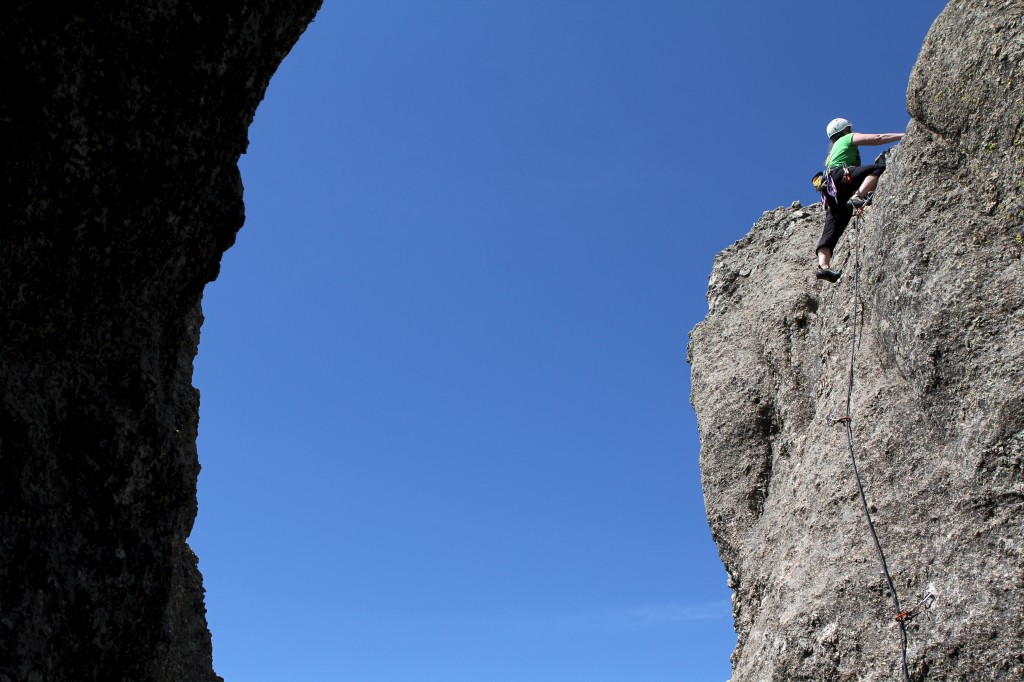 Manuela topping out on Dancing in the Moonlight (5.6)

As I made my way up the token Needles introductory route, Hitching Post (5.5), I only halfway listened to the outrageous commentary coming from below, as I was mesmerized by all of the shiny mica particles I was finding in the rock.  Some of the chunks were pretty large (and crumbly…and slippery…), which definitely kept things interesting.  As the spire narrowed at the top, the path of least resistance actually went around the corner to the top, which made for a picture-perfect finishing pose for the tourists below.  As I stood to my feet I scanned the crowd so that I could wave at Cragbaby, and as I put my hand up to shield my eyes from the sun the crowd erupted into cheering.  At that point it seemed as there was no other choice but to give the crowd what they wanted, so I did my best “Tree Pose” to “Hand to Big Toe” combo.  (As a side note, this is not the first time in my life I’ve wished I could do a handstand…). 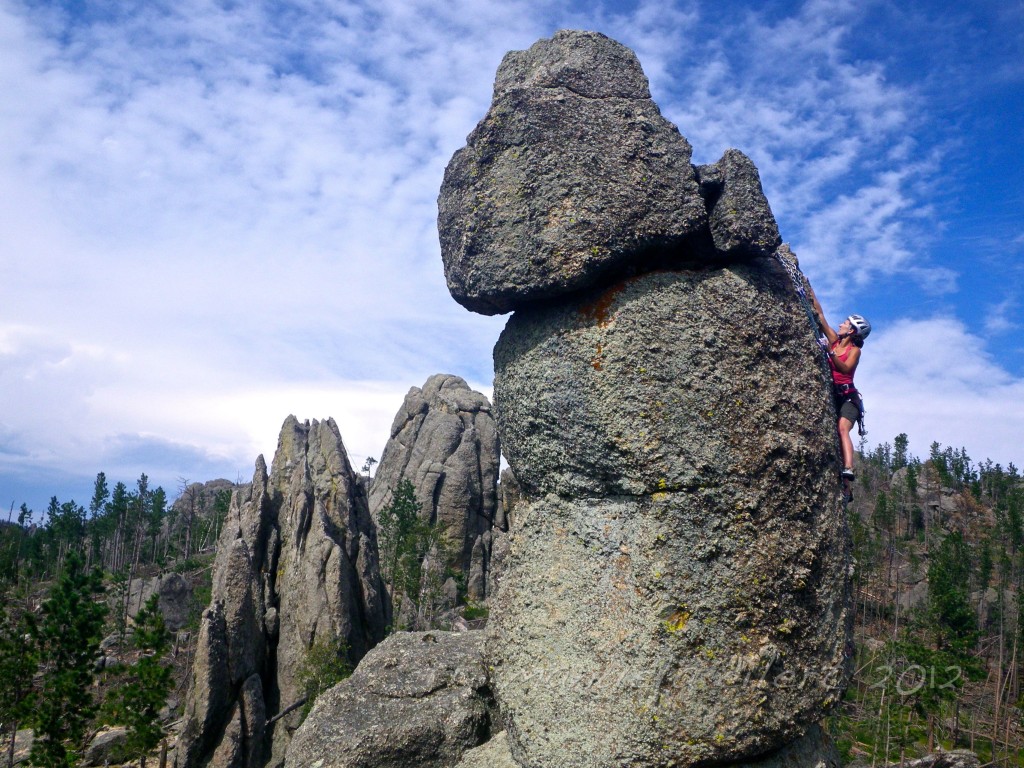 The rest of our crew followed suit, each with a unique, crowd-pleasing, “finishing move.”  Listening to the flurry of conversations around us (and occasionally jumping in to answer a direct question) was fascinating, as I realized that we definitely had achieved daredevil status with half of these folks.  The other half were convinced that if that skinny little girl could do it, then they could do it with their eyes closed and hands tied behind their backs.  😉 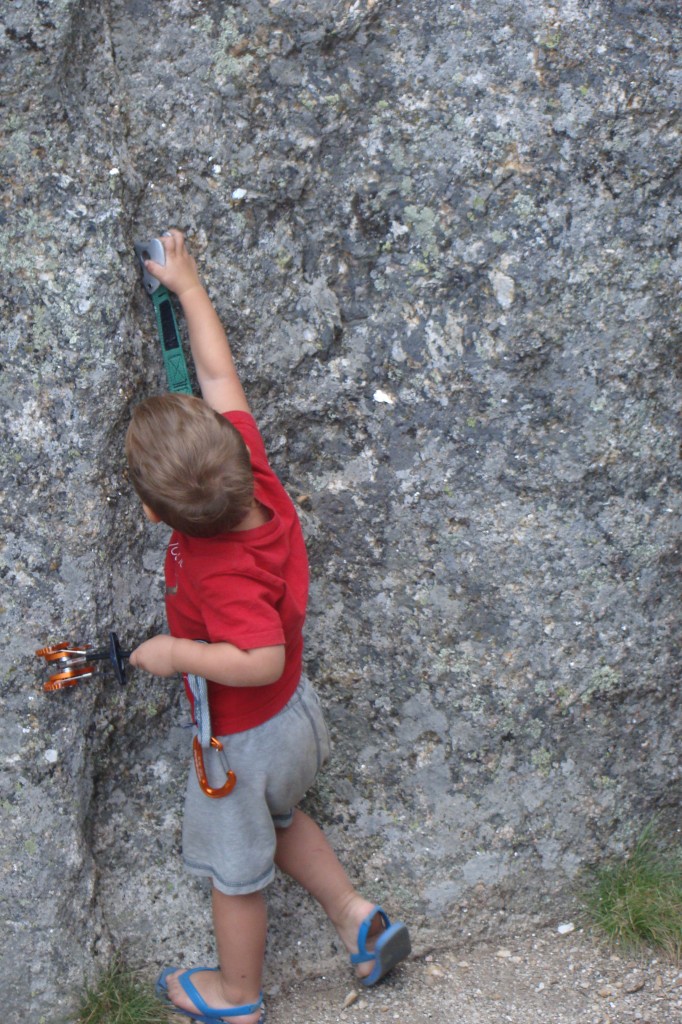 “One of these has GOT to fit!” (A show of hands if you’ve ever said that…)

Speaking of eyes closing, Cragbaby’s were almost there by this point, so we escaped the crowds and hiked over to the Moonlight Ridge area, where we could enjoy the solitude while C caught a few Zzzz’s.  Manuela and Norbert climbed Dancing in the Moonlight (5.6), while Steve and I swapped turns on the sharp end of Zeus (5.10a).  I knew I’d only have time for one route in this area, and after scouring the spires, Zeus was the standout choice.  It’s a mixed route – technical slab to a crack, to a surprisingly steep (and insanely exposed) finish atop a summit with a diameter no more than 3 feet wide on any side – perfect for planking, a superman, or ___________ (insert personal finishing move of choice here).

At this point the sky was looking rather threatening, so we headed out via the scenic road through the park.  Worth noting, while the views were great, the constant switchbacks and hairpin turns made for a MUCH longer route than anticipated – probably not the best idea for a car whose inhabitants are hungry, tired, and a feeling a little carsick.  But nothing a buffalo burger from Grizzly Creek couldn’t fix…

And with that, the climbing portion of our whirlwind wild west adventure was drawn to a close.  It seems like it ended almost as soon as it began, but we have thousands of photos, memories, and even a few battle scars to prove that we were there, we saw, and we conquered our goals!  I didn’t send anything super hard, but my objectives for this trip were much more about mileage, so I’m definitely still satisfied.  I bumped my highest onsight up a letter grade, and was able to string multiple .11’s and a 12 back to back to back.  I think the Spearfish, Ten Sleep, Needles combo was a winner in every aspect, and we certainly couldn’t have asked for any better weather!  Anytime I’ve ever traveled far from home to go climb, I always come back wishing that I lived closer to that area, but I have to say that Ten Sleep is on another level.  I would love to go back again for a longer period of time so that I can project some harder stuff.  But until then, it’s back to the daily grind and weekend craggin’ for us!  Which is really not a bad gig at all 🙂  Stay tuned for the “non-climbing recap” from Custer State Park in the next post, and click here to check out more of our “moves” on the spire summits… 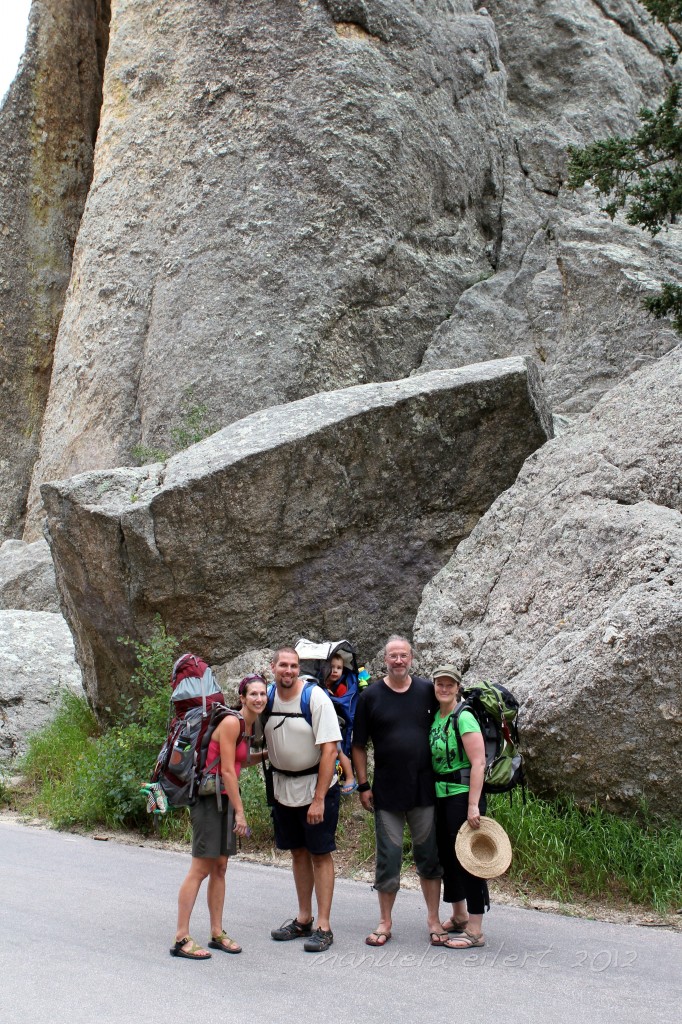 The only picture that has 1) Everyone in it. And 2) No one making a weird face.