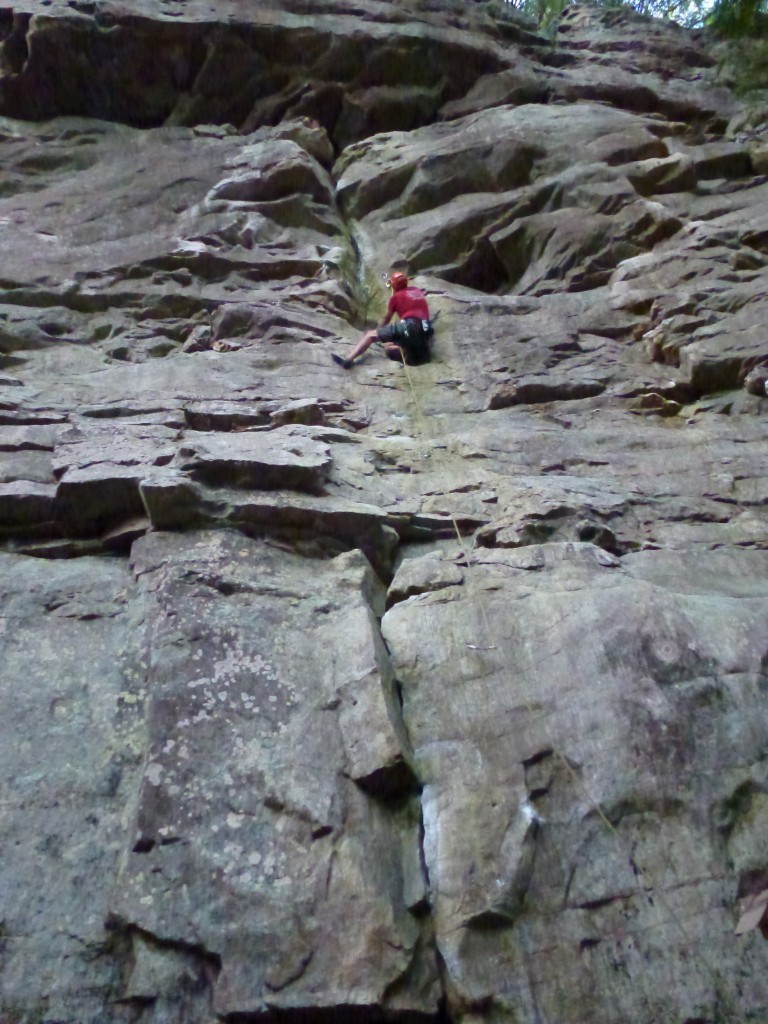 Steve getting some redemption on Blade Loafer (5.10c)

The Obed Wild and Scenic River is our family’s favorite crag to hit over Labor Day weekend – it’s nice to have an extra day with the longer drive, and we’re able to avoid all the crowds that are swarming at the New and Red River Gorges.  However this time probably could have been talked into going just about anywhere  had the forecast been any better, but it appeared that the entire Southeast was being held hostage by Hurricane Isaac.  We weren’t too worried about the climbing – because of the steep terrain and enormous roofs, the Obed is a fantastic place to climb in the rain without ever getting wet.  But let’s be honest, it’s not very much fun camping in the rain.  Especially when our best hang out options 20 minutes away are a Sonic (outdoor seating) and a crappy pizza joint with locals that give us the evil eye whenever we come in.  Needless to say, a forecast of 50-60% chance of rain every day left us all wondering whether we should even make the drive at all…

I don’t know if we just lucked up or if crags everywhere were spared the rain, but we stayed dry as a bone for 2 full days!  It rained for about 30 minutes on Saturday, and for a couple of hours on Sunday, but for both instances we were already at the crag, sheltered completely at the base of the cliff by massively overhanging rock.  Our original plan had been to climb at least a half day on Monday as well, but when the forecast shifted to 90% rain ALL DAY LONG we figured it would be best to quit while we were ahead, so we decided to climb much later than usual Sunday night, then hit the road.  This made for a post-midnight arrival Sunday night, but luckily we had all day Monday to recover at home (although unfortunately Cragbaby didn’t get the memo that it wasn’t necessary to awaken at 6:30 the next morning…)  Here’s what our weekend looked like… 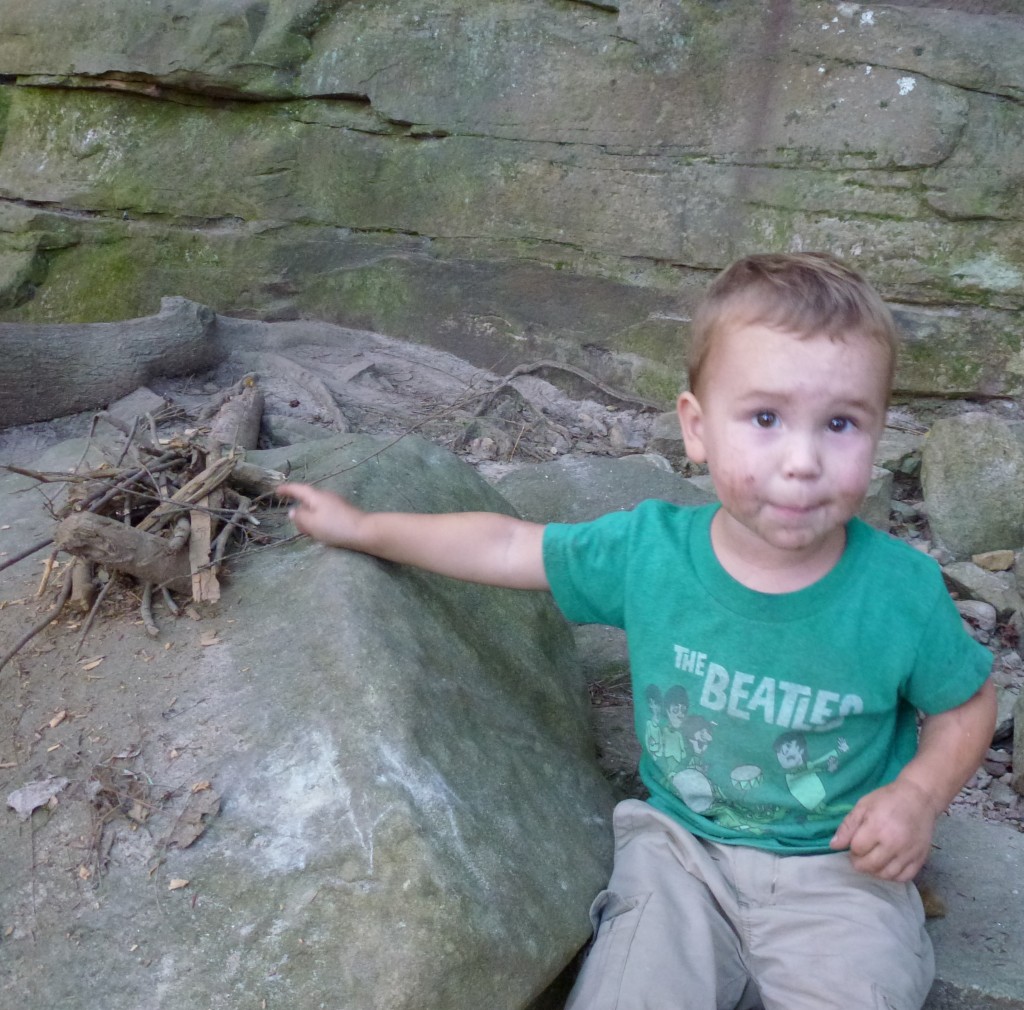 “This is my fire pit guys.”

Day 1:  Lilly Bluff
Paraphernalia (5.10b): Pump-a-delic fun on great holds all the way!
Gangsta (5.12a):   After my saga with this one on our last trip, I was hoping to be able to lay this one to rest, even though the conditions were no better this time versus last time.  But unfortunately there were no fluffy poetic endings to be had, and after a solid 3 attempts (each one an inch closer to sending than the last), I made an executive decision to walk away and come back when it was cooler.  Ironically, not sending it wasn’t nearly as disappointing as it was last time.  I don’t know, I guess I’ve just resigned myself to the fact that it’ll go when it’s meant to go.
Heresy (5.11c):  Yeah, speaking of conditions…the humidity made every chalked hold on this route feel like it was coated in slimy toothpaste.  This route has been pretty meaningful to me over the years, and I hadn’t been on it since I first redpointed it over a year ago.  It was fun doing it again, especially without all the pressure to send.
Whippersnapper (5.11a):  This route was a first for our entire crew – and it was awesome!  With a typical Obed finish on very steep rock with larger-than-life jugs, this route was long, relentless, and provided lots of pumpy fun! 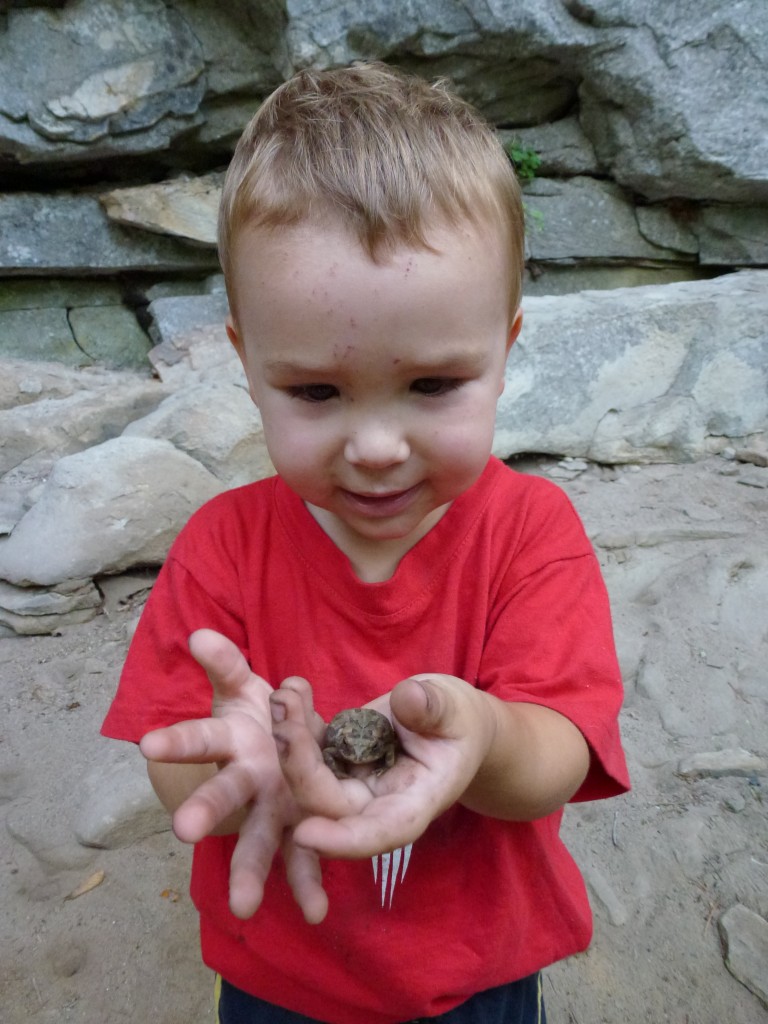 “And this is my froggie.”

We ran into another family at Lilly Bluff, which was awesome because C had some “pretty girls” (his words, not mine) to play with.  While the grown-ups climbed, the three of them were hard at work gathering sticks and twigs to make a “fire pit.”

Day 2:  North Clear
Warm-Up Route (5.10a):  Although short, this route was certainly good enough to earn a better name.  Long moves on brilliant rock, and definitely full-value for the grade.
Saddam Hussein (5.11b):   Probably the tallest single-pitch bolted line I’ve ever done (70m rope required), and also probably one of the best of the grade.  The first 50 feet stem up a picturesque corner before reaching a ledge that you’d better hang out on for a while, because once you pull onto the face again, it’s overhanging rock for another 80 feet.  For me there was a technical crux 20 feet off the ledge (I went for the wrong hold and fell on my first go), and a redpoint crux 10 feet before the anchors (probably only an .11a move but feels pretty darn hard after 100 plus feet of climbing!)  On my second attempt, I sent the route without too much trouble, and was actually able to find several creative rest stances throughout.  If you’re short on time, this is one you can’t pass up! 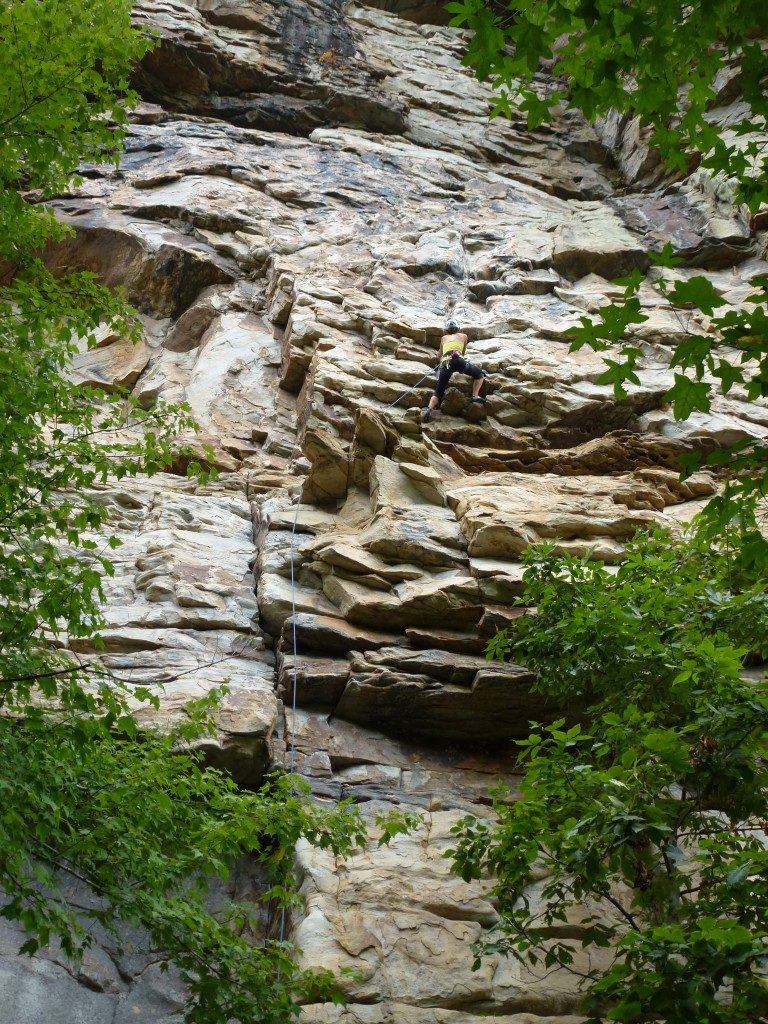 Approaching the business on Saddam Hussein (5.11b)

Keeper of the Flame (5.11d/12a):  I was feeling the effects of taking 2 laps of Saddam, so my first impression of this route was that I would be lucky to even finish it bolt to bolt.  In case you’re not aware, I climb very much “like a girl.”  I move statically and move my feet a lot, relying on technique rather than strength to get me through hard moves.  This works out really well for delicate face climbing…but not so much for big, burly roofs where you have to climb fast and aggressive.  I’ve been working on this and steadily improving, but the closer I get to my limit, the more obvious this weakness becomes.  In fact, I was tempted to skip this one in favor of it’s technical neighbor to the left that I was pretty sure I could onsight.  But after a little bit of good old-fashioned peer pressure, I realized that in the long run this route would be a much better learning experience for me than another .11b tick.  The first half of the route is vertical with several long, committing moves on sloping edges.  There’s a good physical rest to be had under the roof, but with my last bolt 3 feet below my feet and another 5 to the next one, I found it challenging to quiet my mind.  As soon as you clip the next bolt, the assault on the roof begins, which can kind of be divided into 3 distinct sequences – several V2+ moves to get to the next clip, then a big stand-up move into a corner with a hard clip (crux), then a big lock-off with a heel hook that made me feel like I was topping out a boulder problem 90 feet off the deck.  My first attempt went really well – so well, in fact, that it seemed worthwhile to make a redpoint attempt. 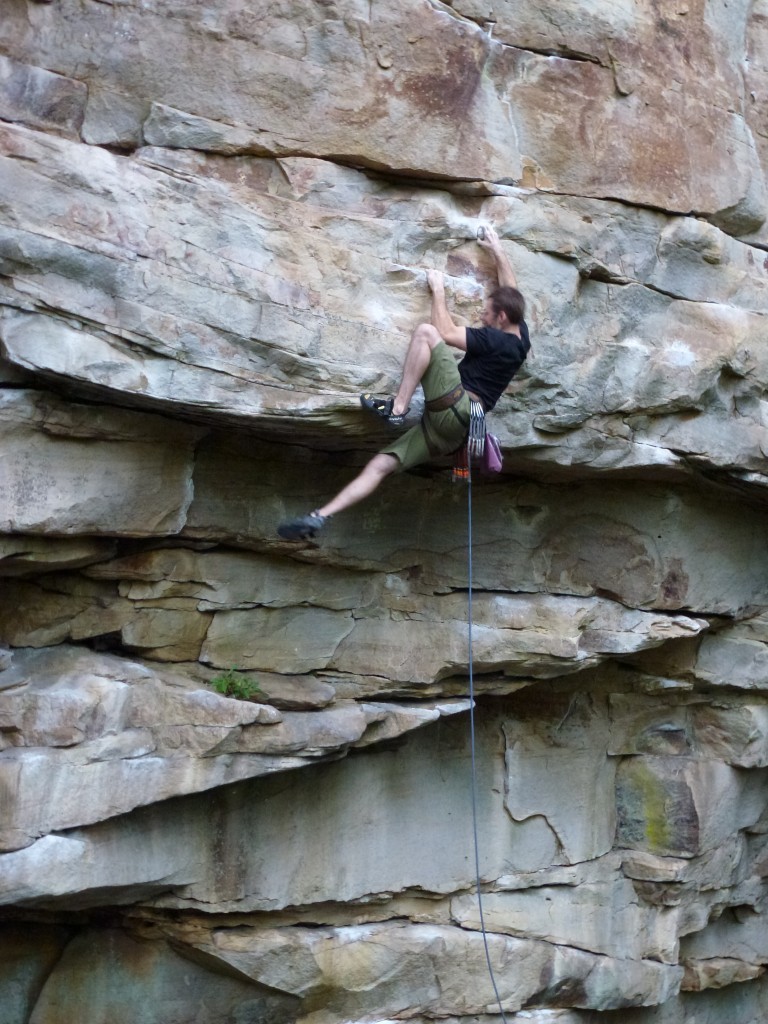 Bennett on the opening moves of Keeper of the Flame

My second attempt was pretty epic.  I had already made a very uncharacteristic decision that if I was clean I was going to channel my inner Chris Sharma and skip the mid-crux clip, knowing that since the wall was so ridiculously steep, adding 10 additional feet to my fall potential would still be safe.  (Between you and me I didn’t think it would matter because I was certain I’d fall before that point anyway.)  But I felt really good on the face and powered right through the initial roof.  I bobbled setting up for the crux just a bit but kept it together for the stand-up move.  I glanced at the rope-less quick draw at my waist and powered up to the jug, where I barn-doored but somehow managed to hang on.  I clipped, breathed a sigh of relief, and in amazement realized that I might actually send this sucker.  All I had left was the “topout move.”  I threw my left heel up, locked off as hard as I could…and was a full 3 inches away from the next hold.  I repositioned every way I possibly could, but clearly didn’t have the gas to make the move and slumped onto the rope.  I rested for a bit and finished up (rather desperately even after the long hang).

So my performance on Keeper of the Flame was right in line with my performance on Gangsta…good, but not good enough.  I’d be lying if I said I wasn’t at least a little disappointed that I came so close and didn’t send – I had felt so strong up until that last move!  But if I look at it objectively, I can see that my “failure” is actually definitive progress.  Keeper of the Flame was a very intimidating, very “anti-Erica” route, and I’m proud of myself for choosing something that would force me out my comfort zone.  Hopefully the valuable learning experience will pay off later.  And Gangsta?  One of these days you’ll be mine.  (insert menacing cyber glare here.) 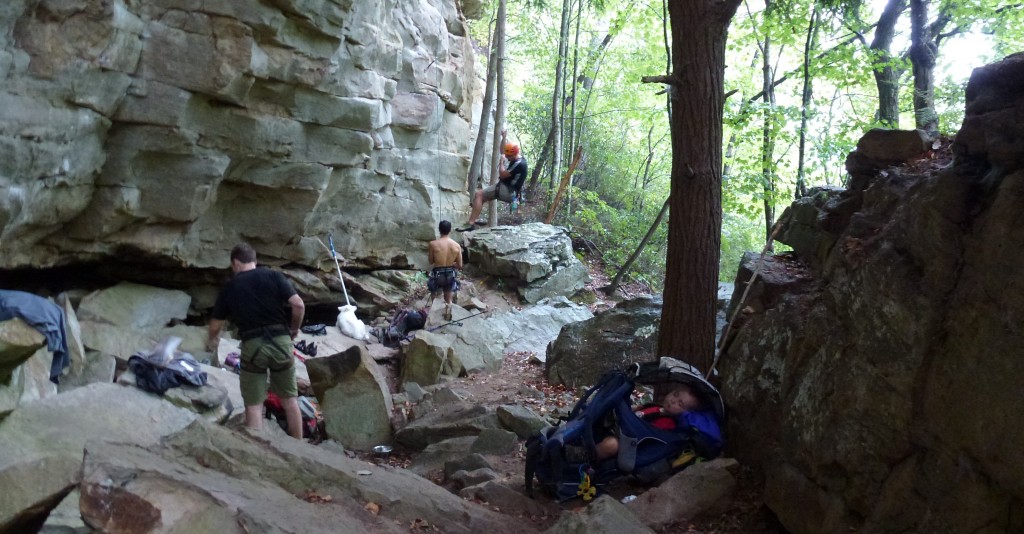 Our crew – warm, dry, and hanging out (and dozing off) at North Clear Creek.

1 Response to “Progress (Not Perfection) at the Obed”