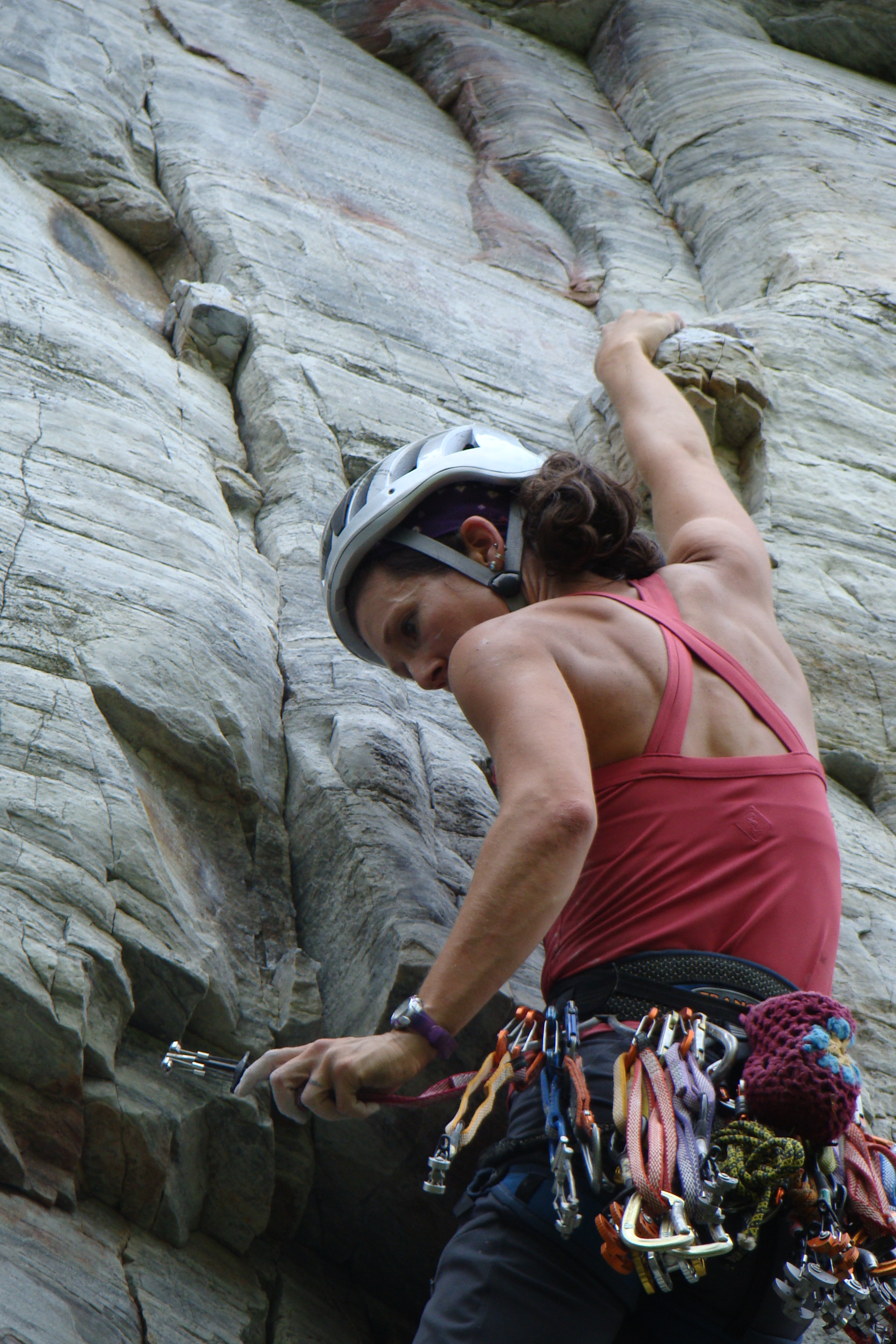 With 2012 in the archives, it’s time to look forward to another year…and another Hit List!  Each time I write out a year’s worth of climbing goals, I get a little bit nervous.  What if I fail?  What if I am nowhere close to any of these goals by the end of the year?  The truth is, that could easily happen.  Maybe the logistics don’t cooperate for me to be able to put in the time needed to cross some of these routes off.  Or worse, maybe I’m able to invest plenty of time into a project, and still come up short!  Goal-setting can be a very rewarding thing, but it can also feel very vulnerable and exposed, especially when you make your intentions known to others.  That being said, here’s what I’m hoping to accomplish on the rock in 2013…

1.  REDEMPTION SONG:  I spent last year trying to get settled in at the 5.12 grade.  But although I was fairly successful in that quest, I still had to walk away empty-handed a good bit.  This year I want to not only push myself a little deeper into 5.12, but also revisit some of the routes that I had to leave unfinished.  Since there are other logistics to consider besides my own (everyone else I climb with has a tick list of their own, after all), I may not be able to get back to ALL of these routes, but you can bet if I’m anywhere in the vicinity, the following will be the first on my list!
Gangsta 5.12a (Lilly Bluff, TN) – I can only think of one other route that caused me more frustration than this one last year.
Keeper of the Flame 5.11d (Obed, TN) – Yeah, yeah it’s only .11d but it is an amazing line and definitely my anti-style.  Long, jungle-gym type moves to a big stand-up move off an undercling crimp.  I shocked myself by making it all the way to the very last significant move on my 2nd attempt last year.  I’m hoping it’ll go down without much of a fight next time.
Lost Souls 5.12a (New River Gorge, WV) – My fellow Trango athlete Dan Brayack shot some images of me on this route last fall to use in some Trango advertising…I did well in the try-hard-face department, but not so much with regards to sending.  I’ve got all the moves figured out, but there are three long reaches right in a row and I could never do them all successfully at any given attempt.  Time to hit the gym for some lock-off training.
Mighty Mouse 5.11d (Moore’s Wall, NC) – I got on this route 3 times last year, all in the midst of summer heat and humidity.  It’s the hardest thing I’ve led on gear to date (by far…), and the scene of my first good whipper on gear.  I’d love to be able to link it together this year.  My best attempt on lead had me hanging on gear just before, right in the middle, and just after the crux (it’s got a looooong crux sequence – the hardest move is probably placing the gear).  When I seconded it to clean my gear I only hung once (the little stopper I fell on mid-crux was a beast to get out!!!) 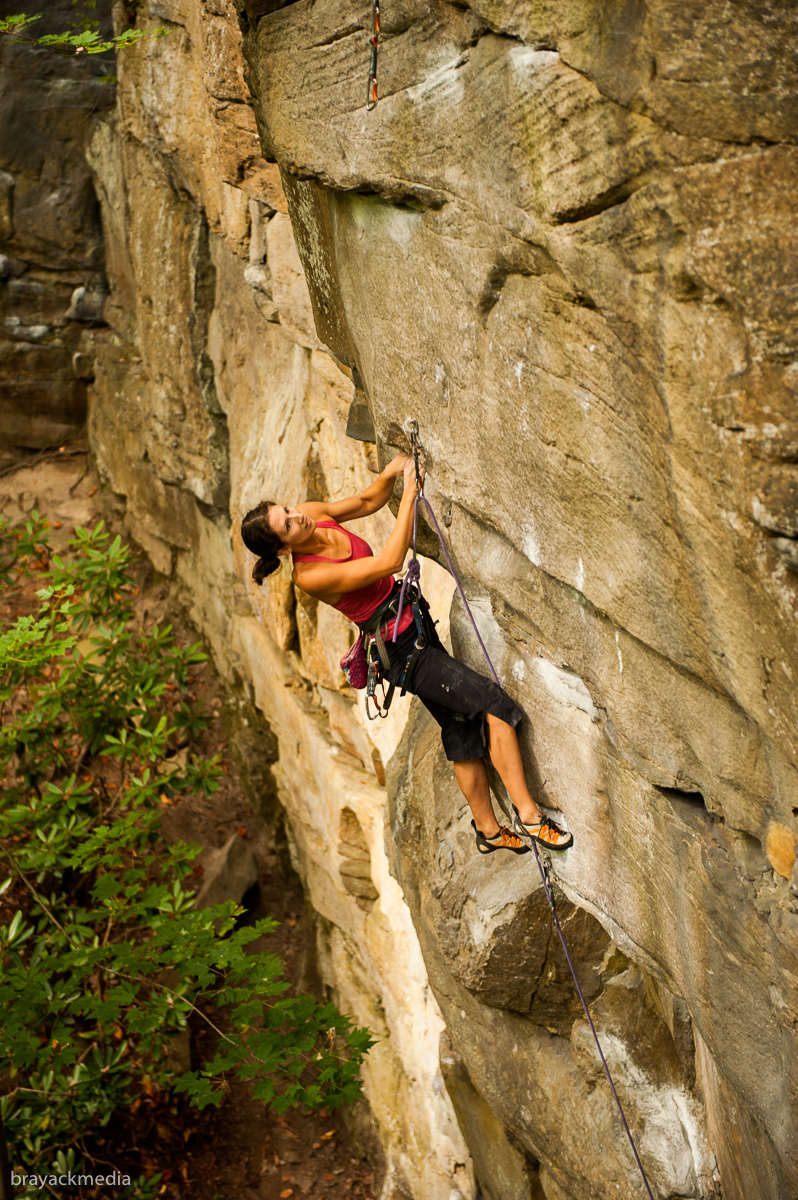 2.  ONE 5.13 FOR 2013 – The mantra for 2011 was one 5.12, and for 2012 it was twelve 5.12’s…I can’t tell you how many folks have asked me about how many 5.13’s in 2013!  I initially dismissed it entirely, as I’m not sure I’m ready for the physical and mental work that would take.  But the more I thought about it, the more I figured there was no harm in trying.  With caution though – one of the things I disliked about my “number-related” goals from last year is that at times I felt like I put too much pressure on myself to succeed, and at times that took some of the enjoyment out of a few days here and there.  So my aim this year is just to TRY one 5.13 for 2013 – after all it does have a nice ring to it! I’ll pick one that caters to my strengths and give it a whirl – if it seems like it’ll go, then I’ll invest some time in it.  If it feels really far away, I’ll step back from it with a newfound knowledge of the skills I need to develop to take my climbing to that next level. 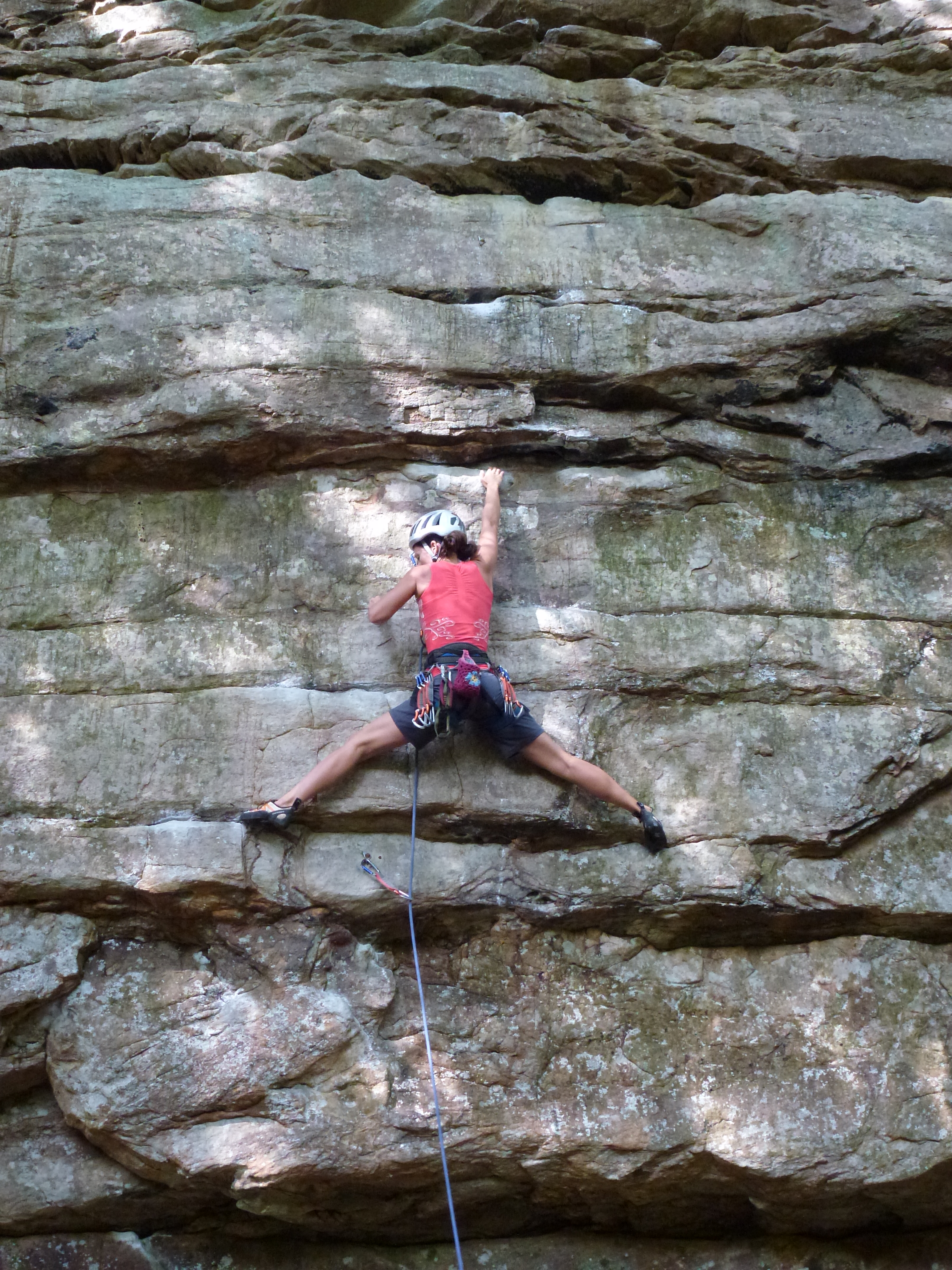 3.  SEND SOME CLASSIC “GUY” ROUTES – I will be the first to admit that I climb like a girl, which can certainly have it’s advantages; I know how to use my feet, I can match hands on the tiniest of holds, and tech my way up a heady slab that would make the princes of plastic at the gym crap their pants.  But put me on terrain where I’m horizontal and my weaknesses become glaringly obvious.  I hesitate and move far too slowly to be efficient, searching around for perfect footholds while my pump clock ticks louder and louder.  I’ve always had to work harder for steep lines than their techy, vertical equivalents, but last year I made some slow but steady improvements in the overhanging realm.  So this year I’d like to put some time in on some of the quintessential, steep “guy”routes in the region.  And I don’t mean just slightly overhanging – I’m talking the kind of angle that forces your belayer to either schedule a next-day appointment with their chiropractor or buy those fancy schmancy belay glasses.  As this goal will be contradictory with Goal #2 in every way, I will be hard-pressed to even attempt all of these, nevermind redpoint them, but here’s just few bad-ass lines that would qualify.
Narcissus 5.12a (Summersville Lake, WV) – This is the only one listed that I’ve actually been on before, so it would probably be a good place to start.  I led it basically bolt to bolt this past fall and felt reasonably good on it.  There’s a few sections that will be beastly to link together, but the individual moves felt easier than I was expecting.
Depth Charge 512b (Meadow River, WV) – This may work slightly in my favor because the crux is actually on the technical face below the roof.  Working against me is that the line’s so intimidating it makes my tummy hurt just looking up at it…
Solstice 5.12a (Obed, TN) – From what I hear a lot of folks think this route is pretty stout for the grade, but I’ve seen a young boy on it much shorter than me, so I’m assuming that means there’s nothing terribly reachy on it.  We’ll see…
Tierrany 512a (Obed, TN) – This is another one that at first glance appears overwhelming.  Not sure if we’ll make it out to the Obed enough times to put in the effort this one may take, but it’s a classic for sure, and I’d love to at least try it once!
Unwritten Law 5.12b (The Dump, NC) – So it’s not world famous or anything, but it’s a rite of passage for any NC climber, and with a massive dyno to the anchors, it’s about as anti-Cragmama as you can get.  Even if I can’t send it, I’m sure it’ll at least be a fun ride! 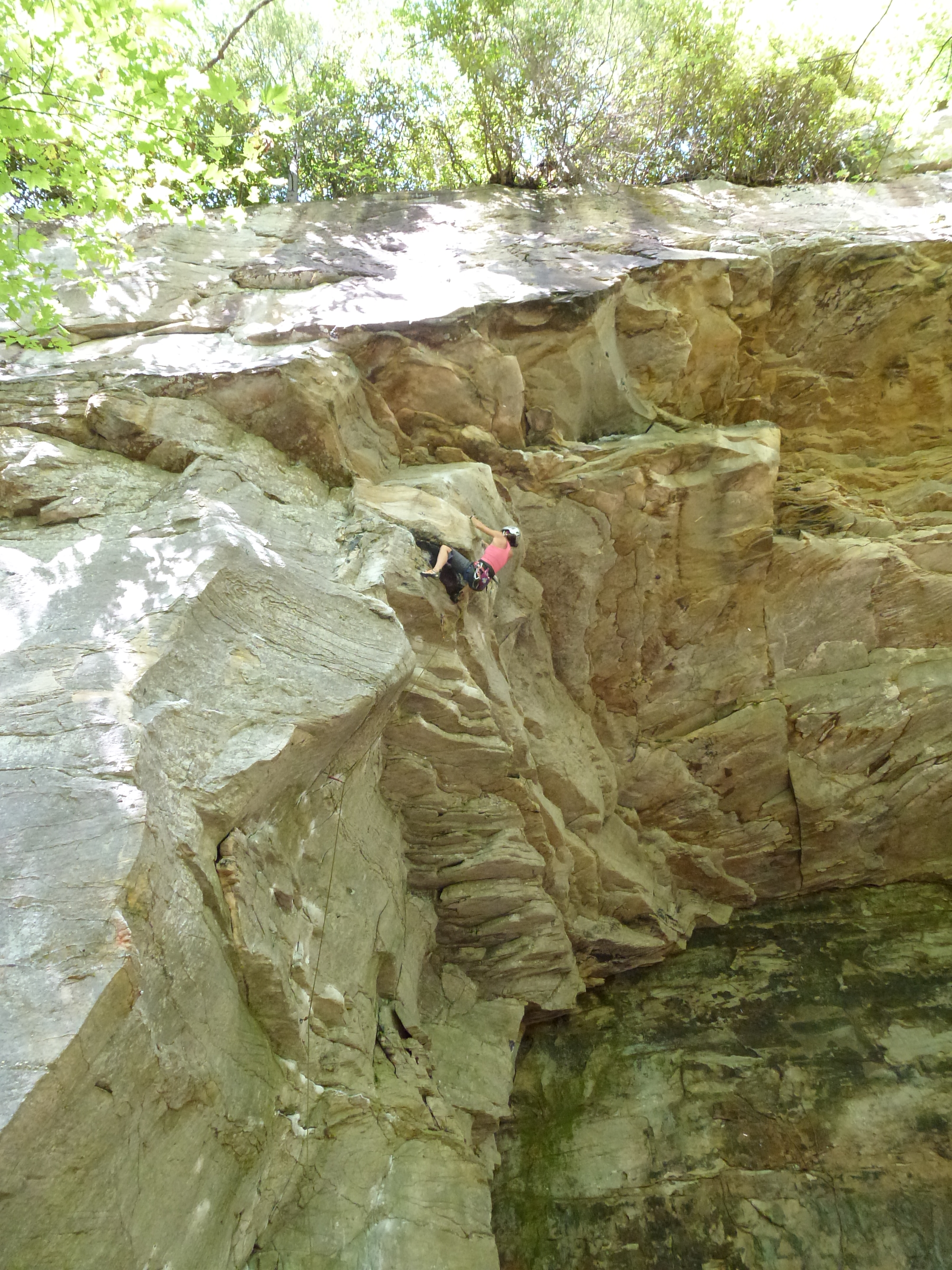 4.  FIVE V5’s – Considering how seldom I boulder once warm weather hits, (not to mention how non-committal my attitude can be about bouldering these days), this one may be a long shot…but I figured throwing it out there might make me more motivated to get it done.  If I can stay focused long enough, I think I can do it, and the strength I would most certainly gain from all the work would surely translate in crux sequences on the ropes.  It helps that I’ve already cranked one out already during one of the first trips of the season at Rumbling Bald.  🙂

5.  DON’T GET HURT… Though my injury last year was nothing I could have prevented, I surely don’t want to have to deal with that again any time soon, so fingers are crossed for a healthy year with things beyond my control.  That being said, there’s plenty of injury prevention tactics that ARE within my control.  Thankfully I haven’t had to deal with any overuse type injuries in years, and my goal this year is to keep it that way – the harder I climb and the older I get, the easier it is for nagging pain issues to creep in and take up residence.  Instead of taking  month off at the end of the year next year, I’m going to experiment with taking more frequent, shorter breaks throughout the year.  Maybe a couple of weeks in the heat of summer when it’s more fun to be at the beach than in the mountains.  Maybe a well-timed week after a month’s worth of multi-day weekend trips in the spring. 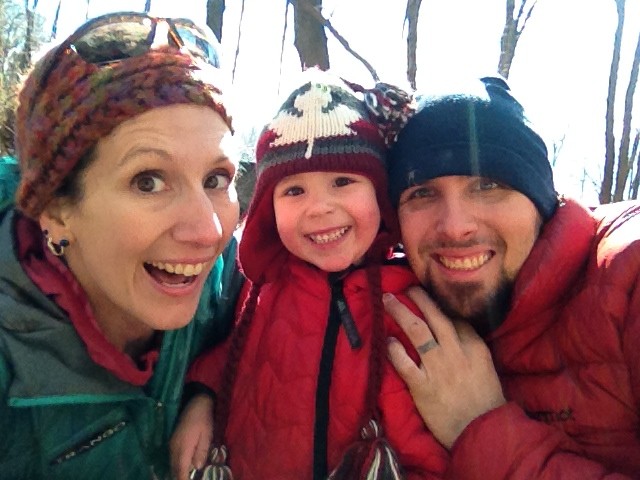 Regardless of what 2013 brings, the real #1 goal is to have fun with these guys!

Setting a higher standard for yourself is a gamble for sure, but the feeling of accomplishment gained from crossing off items on the list is a great reward.  So even though it always feels risky to put myself out there, I’ve learned that the journey along the way (whether it be failure or success) always provides a learning experience that makes it worth doing.  So now that I’ve been transparent, it’s your turn – what are you hoping to accomplish in 2013, either on the rock or off?  What routes, mountains, trails, slopes, or destinations are you hoping to enjoy, either for yourself, or with your family?  (And don’t be afraid to aim high…worst case you fall and your friends/family/climbing partners are right there to pick you up 😉 )