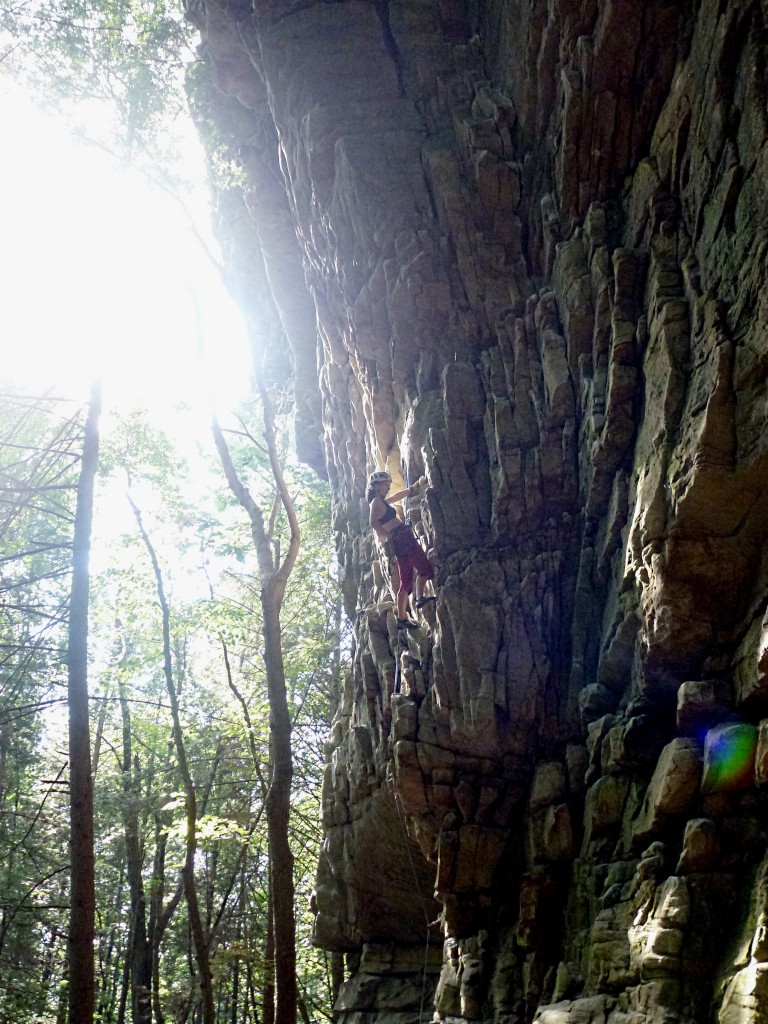 Me starting the day on Lounge Lizards (5.11b)

If you read last week’s trip report from Grayson Highlands, you may remember that lately we’ve been struggling with bad weather woes, as well as securing climbing partners.  Climbers sans kiddos can wait until the last minute to make their plans, and just head out the door on a whim to wherever conditions look best…we can’t!  For us, no partners means no climbing, so we’ve got to be proactive and plan ahead.  This time around, we ended up with a good-sized group for 2 out of the 3 days.  The weather forecast wasn’t stellar, but it ended up being a lot better than predicted (and if there’s anywhere I want to be when it’s raining, it’s under the steep, tiered roofs of the Obed crags!)

We spent our first day in the shade at Lilly Bluff, where Steve threw himself at Gangsta (5.12a).  That climb was once upon a time my nemesis, and it is quickly turning into a similar saga for him.  Between nursing and hanging with Baby Z, I only managed to squeeze in 4 pitches – Lounge Lizards (5.11b), Clyde the Mega-Dude (5.11b/c), Whippersnapper (5.11a), and Beach Ball (5.11a).  All were routes I’d previously sent, but the first 3 I hadn’t been on in years, so it was fun to hop on some classics again! 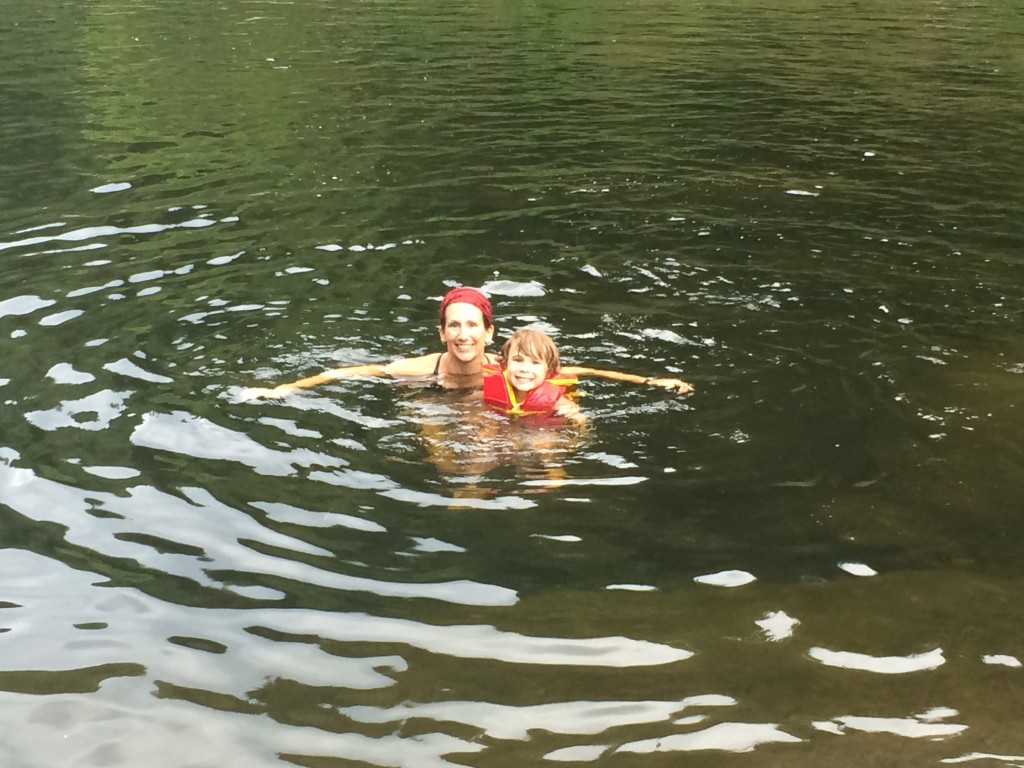 We got a lot of rain Saturday night.  A lot.  The first band of storms came through right in the middle of dinner, and we were glad we brought our EZ-up to keep everything (relatively) dry.  The next wave rolled through during the night- kiddos slept right through it, but the Crag-Daddy and I were getting dripped on (apparently it’s time to add some seam seal to our tent…).  Steve got creative with hanging up dirty clothes to catch the leaks, and we were all back off to dreamland again.

Day 2 we went where we knew we’d find dry rock – the Inner Circle at North Clear Creek.  The Rail (5.11c) is actually a great warm-up for the wall – V2-ish boulder problem at the start and about 60 feet of gentle 5.10 to get the blood moving before tackling the unique roof feature up high.  After that, I had planned to put in some more work on Keeper of the Flame (5.11d/12a), the only route I got on this weekend that I hadn’t previously sent. 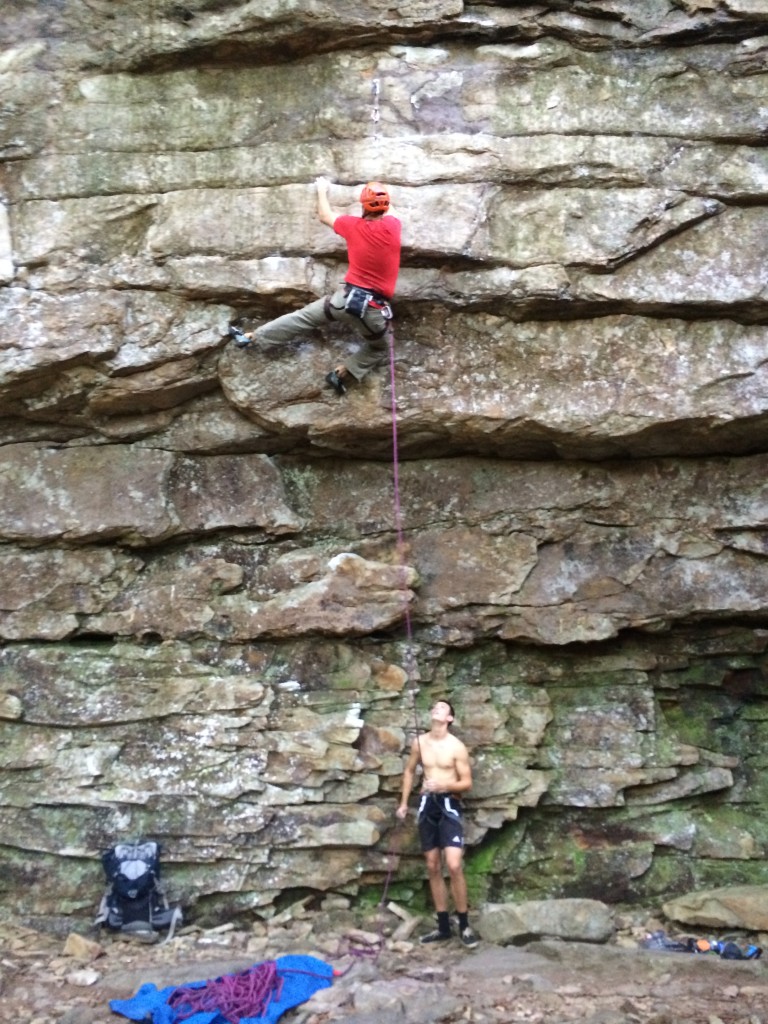 Steve gettin’ his Gangsta (not “gangster”) on.

Considering how pumped I’d felt at the top of every single route the day before I didn’t have my hopes set too high.  I’ve been doing a lot of bouldering in the gym lately since my schedule makes it hard to find partners to rope up with – so while my postpartum strength is coming back quickly, my endurance is lagging far behind.  The crux on Keeper is a doozy – a big stand-up move off of a matched full-pad undercling.  Off the ground the move wouldn’t be that hard, but it occurs after a big-lock-off-infested 5.11 face and a sequence of very steep tosses between jugs to get the forearms a blazin’.  (There is a no hands rest towards the top of the face, however…)  There is also a bolt mid-crux that is virtually impossible to clip without expending a load of unnecessary energy, so on a redpoint attempt it makes sense to skip it (the terrain is so steep that even a giant fall with rope out would be nothing but air.)

Just after the crux there is one more hard move – rocking onto a small ledge via a high heel hook and crimps.  The move is probably no harder than V2, but coming in hot out of the crux it feels ridiculously powerful.  (It’s also the move I fell at on my last attempt a couple of years ago.) 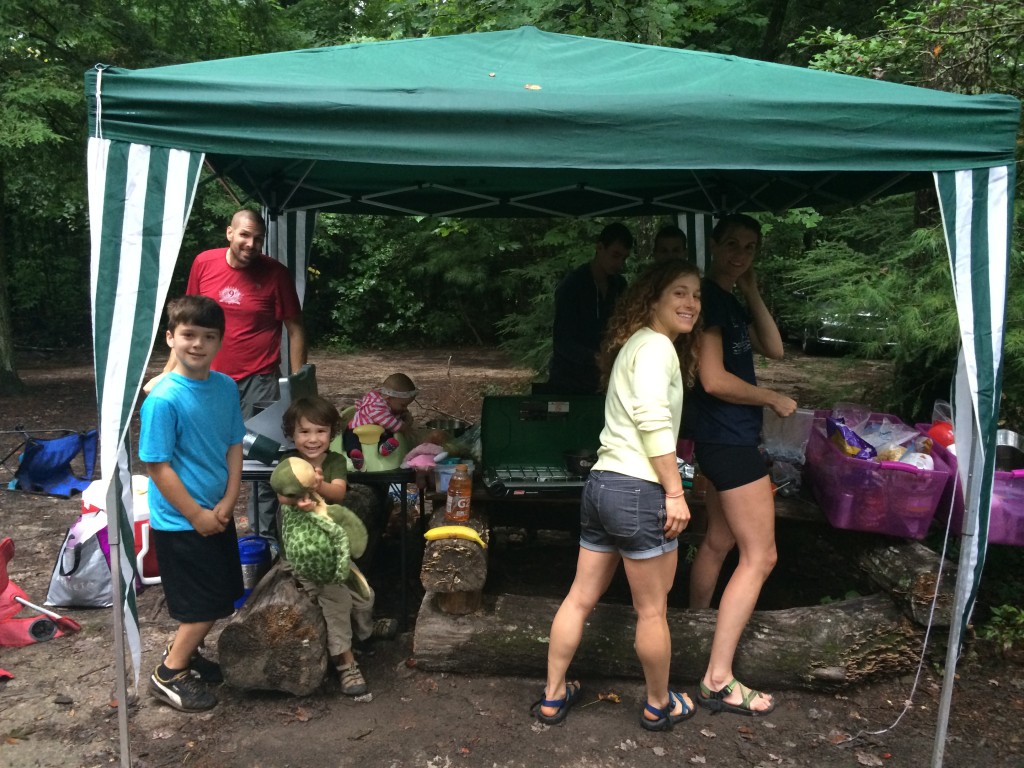 EZ-up for the win! (Although this shot was taken the next morning…)

My first go I hung at a few bolts to re-familiarize myself with the moves.  I made it through the crux and was ready for the last rock-on move, but when I threw my heel up, I felt something move and vaguely heard someone shouting.  Turns out I had accidentally dislodged a soft-ball sized rock and sent it hurtling towards the ground.  To everyone’s horror, it hit my friend Joy on the side of her head, but THANKFULLY it just grazed her as she was leaning away, leaving her with a good-sized gash as a souvenir.  It didn’t knock her out and she showed no signs of a concussion, but the gash was nasty enough that her day was over. 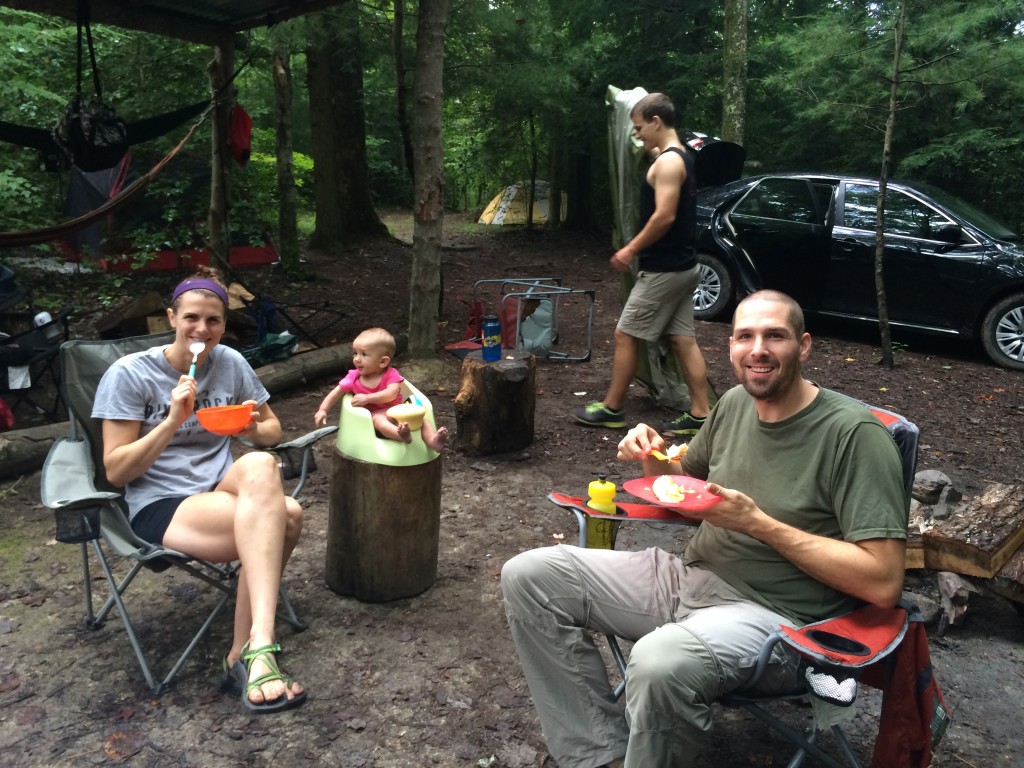 Out of the 10 climbers that were at the cliff that day, none of us were anticipating that scenario.  In fact, we noted that in all of our years climbing (which collectively added up to more than 50 years), we had never encountered an injury such as Joy’s at a popular, well-traveled sport climbing area.  I don’t need to go into details of what could have happened had a rock of that size been a direct hit.  This was a very sobering reminder that loose rock can be encountered anywhere (not just in alpine situations or at “chossy” crags), and that it is IMPERATIVE to not hang out directly underneath a climber. 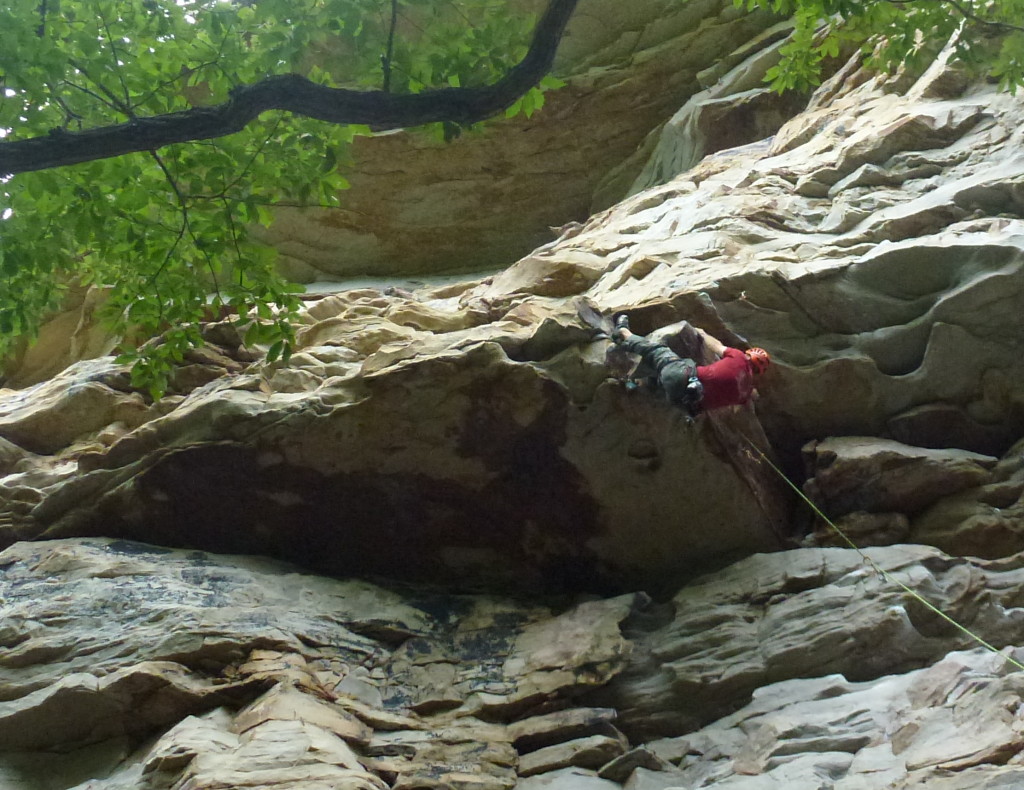 Everyone was a little shaken up after that.  Joy hiked out (of her own accord) with her partner and son, presumably to get herself checked out at the hospital.  There was still a good deal of their gear left up on the wall (not to mention their packs at the base,) so we stayed there for a few more hours.  I will be the first to admit that I felt guilty staying there, but it obviously didn’t make sense for all 8 of us (including a baby and a preschooler) to wait around at the hospital for what could be hours.  As it turns out, she updated us not long after that she had texted pictures to a doctor friend of hers who gave her the okay to skip the ER, so she spent the rest of the afternoon relaxing around camp and then drove into town for a good dinner. 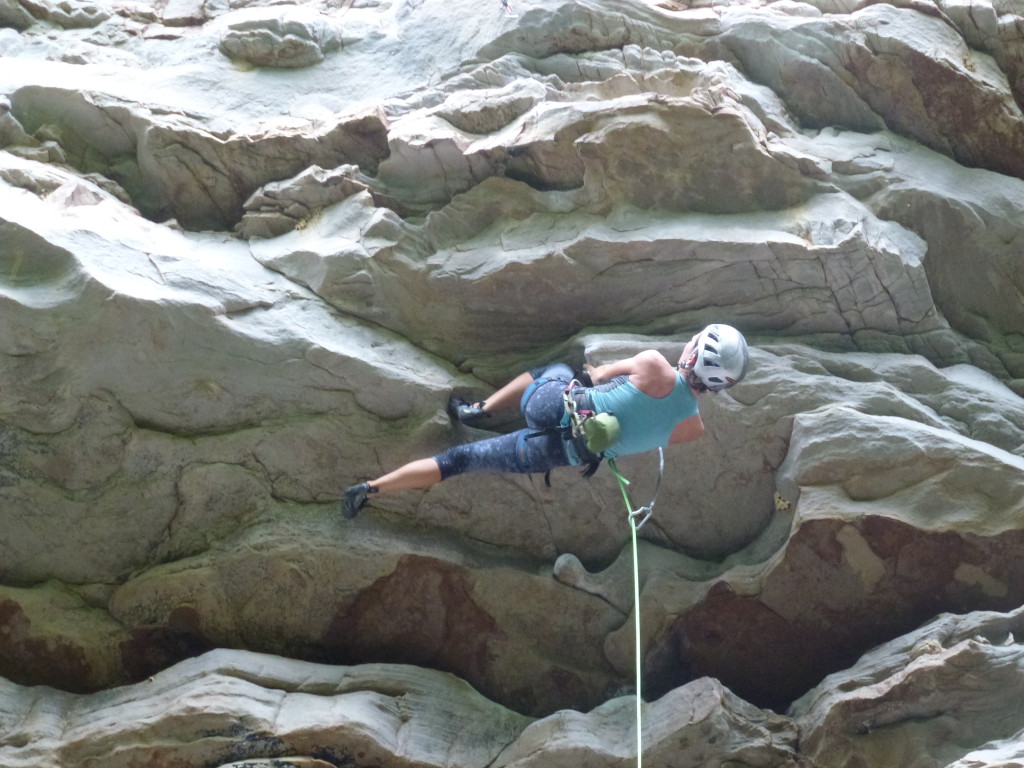 Me navigating the steeps on Keeper 5.11d 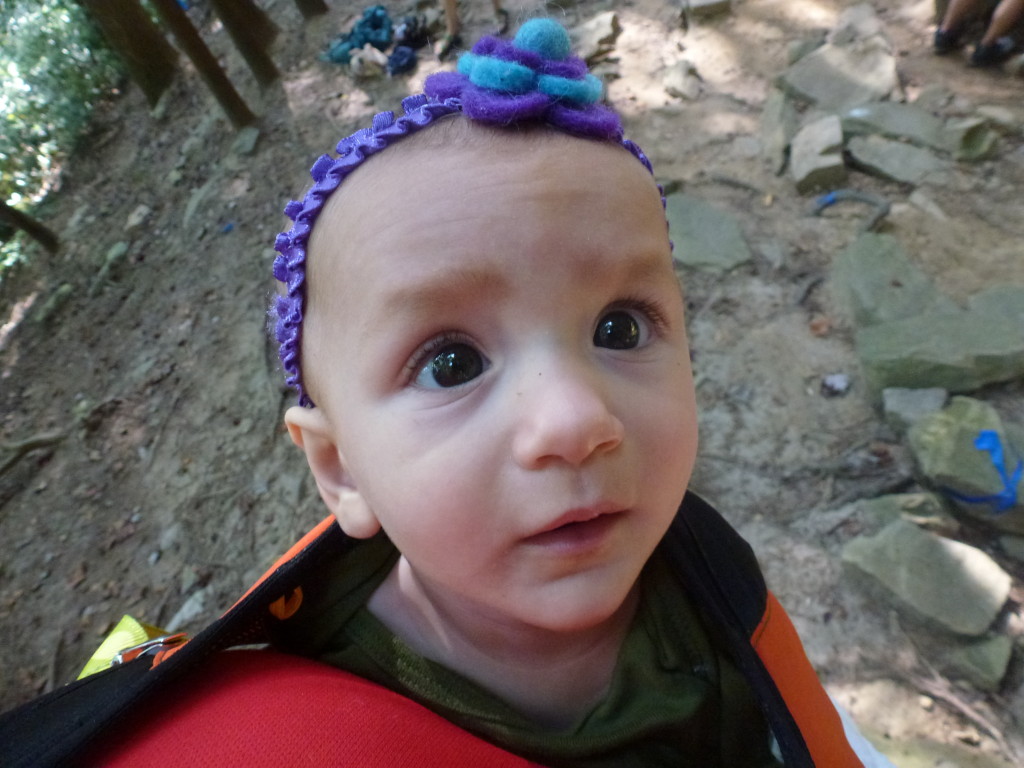 She was supposed to be sleeping in this picture. Good thing she‘s so cute…

I got back on Keeper again (the only other time I climbed that day), and felt really good about it.  The face went well, and I felt strong through the steeps approaching the crux.  I was red-lining as I stood up off the undercling, but I skipped the crux clip and managed to power through to the jug (although I was pretty shaky making the post-crux clip…)  So now I was at my previous high point (and the same point where the rock had gotten knocked off.) Since I’d lowered directly when Joy had gotten hit, I hadn’t worked out the beta for that section, and in my pumped state I couldn’t make the move, so my run ended the same way it had a couple of years ago.  I jugged back up and found some foot beta that I think will work another time, but I didn’t have it in me to try again that day.  Hopefully next time.

Our last day was pretty hectic.  We had plans to climb at Little Clear, but a snarling dog was blocking the entrance.  There was a random guy in a white truck (who we initially thought was a ranger) who hopped out with his shotgun to “take care of” the situation, which we didn’t really want to be a part of.  We ended up calling the park staff and headed back to Lilly Bluff, which was unfortunately still wet from the previous days of rain. 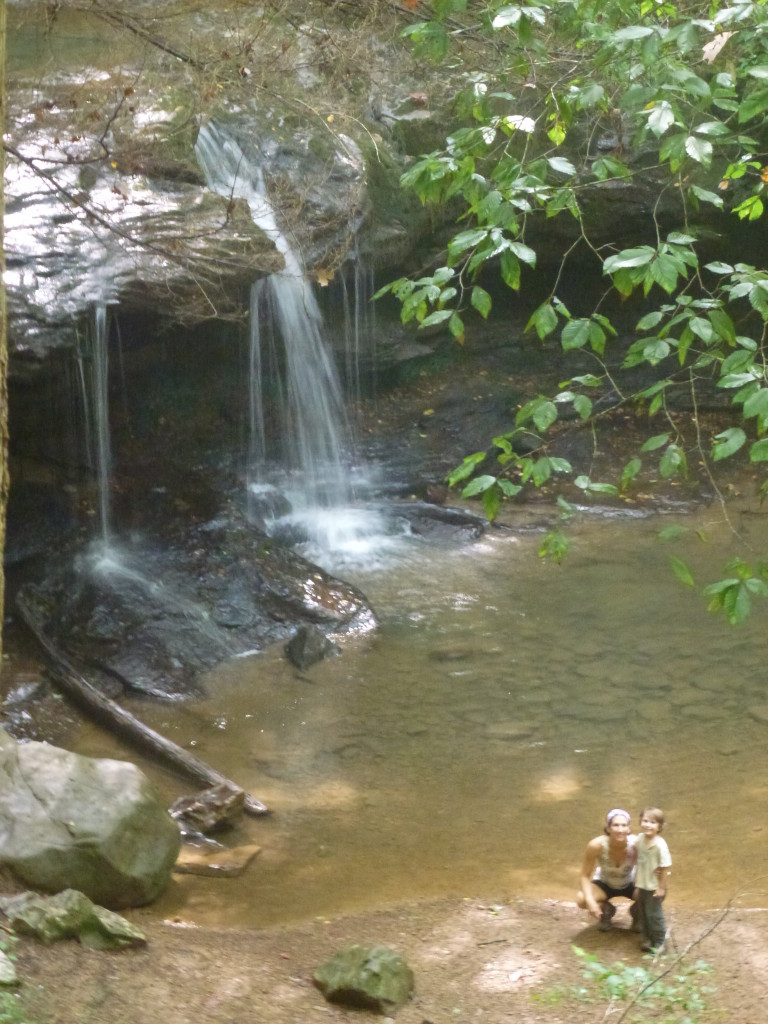 By this point our partners were ready to head home, which of course meant we were done as well.  I’d be lying if I said I wasn’t a little disappointed in the amount of actual climbing I’d gotten to do all weekend (only 7 pitches total), but we learned a long time ago that when you climb as a family you often can’t be choosy and should be grateful for what you can get.

After such a hectic summer it felt great just to be outside on a rope again, and after the close call with Joy, I think everyone left with a renewed respect for these rocks on which we climb.  From now on I know our family will be definitely be even more hyper-vigilant about where we let our children play at the base.

On the way home we ended up squeezing in a waterfall hike at Frozen Head State Park – we’d always seen signs on the way in but had never stopped.  It was beautiful, and another time, would be a great place to spend a rest day!

Well that was our weekend – lots of excitement, of both the good and bad variety!  How was everyone else’s Labor Day adventures? (Oh, and several days later, Joy is thankfully feeling great and has nothing more than a tender noggin’!)

1 Response to “Labor Day at the Obed River”