It was pretty crowded in the gym last Sunday.  The weather was crappy and there were a LOT of birthday parties going on.  I was patiently trying to maneuver through my fairly extensive warm-up routine before retreating to the training area to do some Power Enduro laps.  I was almost ready, just needed to do a handful of more challenging problems that I had really dialed.

There was already someone (a 20-something guy) working one of the boulder problems I was interested in doing.  He tried several times, and kept getting stuck at the crux, 3 moves in.  I waited until he took a break and stepped back, then I chalked up and walked over to the start of the problem.

Then this conversation happens…

Guy: “Are you going to do the white one?” (this problem that started right beside the problem I was intending to do, which happens to be 2 number grades easier)

Me: “Actually I was planning to get on the blue one.”

Guy, with a patronizing smile on his face: “That one’s a lot harder, you know.”

It actually took me a few seconds to understand what had just happened.  I was confused…why would he think I wouldn’t know that?!?  And then it hit me like a ton of bricks – I’M A GIRL.  If HE was struggling on a particular problem, then surely a GIRL would as well.  He’d better chivalrously point me in the direction of a problem I’d have a better chance of success at.

I wish I would have been quick-witted enough to procure my most innocent smile and say (as I twirl my hair), “Oh gee, I didn’t realize that, you’d recommend starting this one first?”  Then climb up and down the easier problem before linking into the harder one.  But I was so dumbfounded by how blatantly sexist his remark was that I just sort of awkwardly mumbled “I know” (probably sounding a little Napoleon Dynamite-esque) as I sat down at the start holds.  But I DID proceed to sail up the problem, so at least my actions spoke up for all womankind. 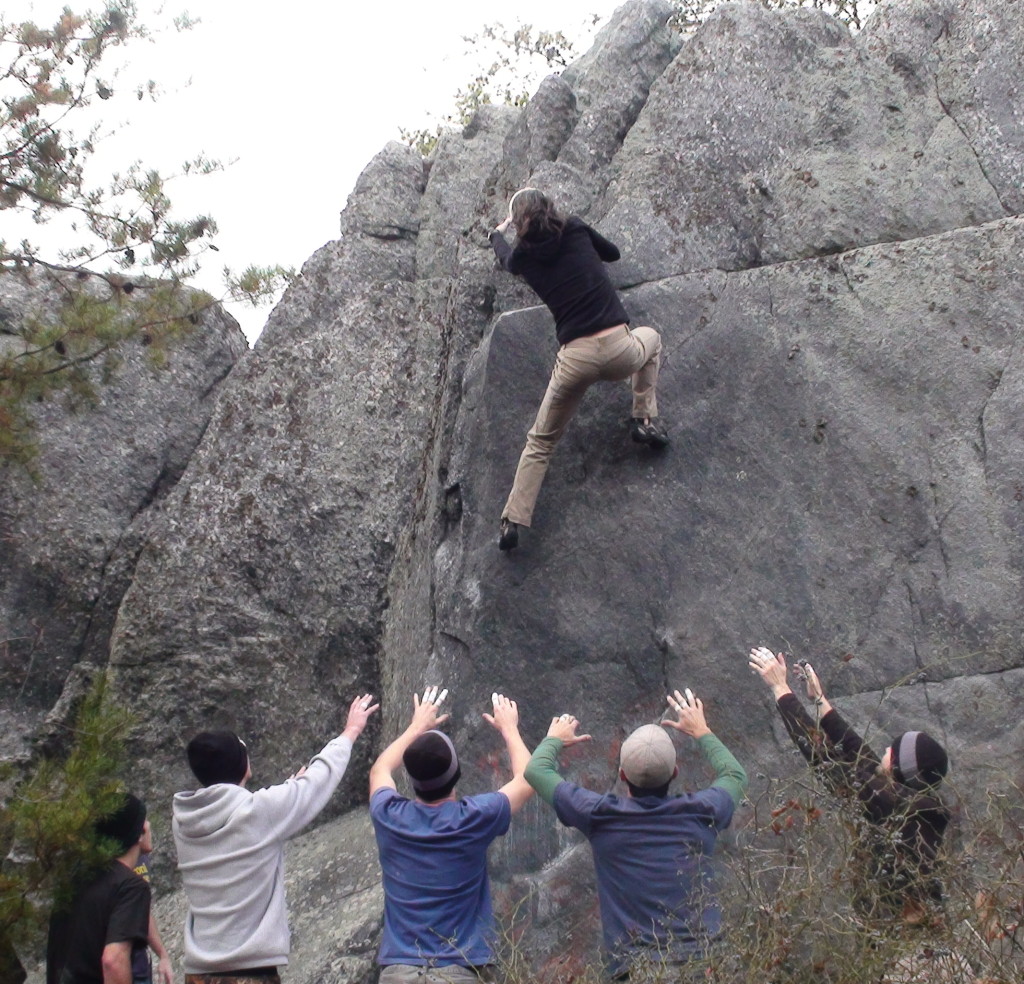 After I hopped down he started to backpedal a bit, asking me if I had any beta that could help him in the “tricky, technical section.”

This time I was ready.  “Ya know I don’t really remember what I did there, it all felt pretty straightforward to me.”

I then walked over to the training area, where I was able to channel all of my girl-powered rage into my best performance yet on my Power Enduro circuit.

So that’s the rant.

This is certainly not the first, nor will it be the last example of sexism at the climbing gym/crag.  I’m a member of several facebook groups/forums for women climbers, and quite often I hear stories about male climbers who assume that all female climbers are inexperienced little lambs needing a MAN to put up “girl routes” for them.  But I just assumed those guys were a**holes who were few and far between.

Which brings me to the salute.

I’m so thankful that I don’t have to put up with this crap out of my climbing crew.  Because our family has always had to have at least one extra partner with us for the last 5 years, we’ve developed a pretty extensive network of folks that we climb with on a regular basis.  And since males tend to outnumber females as a whole in the sport of rock climbing, a high percentage of the people we climb with end up being guys.  There’s a wide range of abilities, but a lot of them are A LOT stronger than me.  And I can honestly say that I’ve never had any of them make me feel like that guy at the gym did (which is why it took me so long to figure out what he meant!!!)

It made me realize that my male climbing partners are pretty great (the greatest of which is the Crag-Daddy himself, of course!)  So here’s a shout out to them – Steve Lineberry, Caleb Odell, Sam Stephens, Bennett Harris, Drew Hayes, Joe Virtanen, Kyle and Adam Drain, Emil Briggs, Chuck Bridgen just to name a few!

Now it’s your turn – I’d love to hear about your experiences with sexism at the crag/gym, be it via rants or salutes.  And of course, if you’ve got great, supportive climbing partners, call ’em out by name!

20 Responses to “To All the Guy Climbers: A Rant and a Salute…”