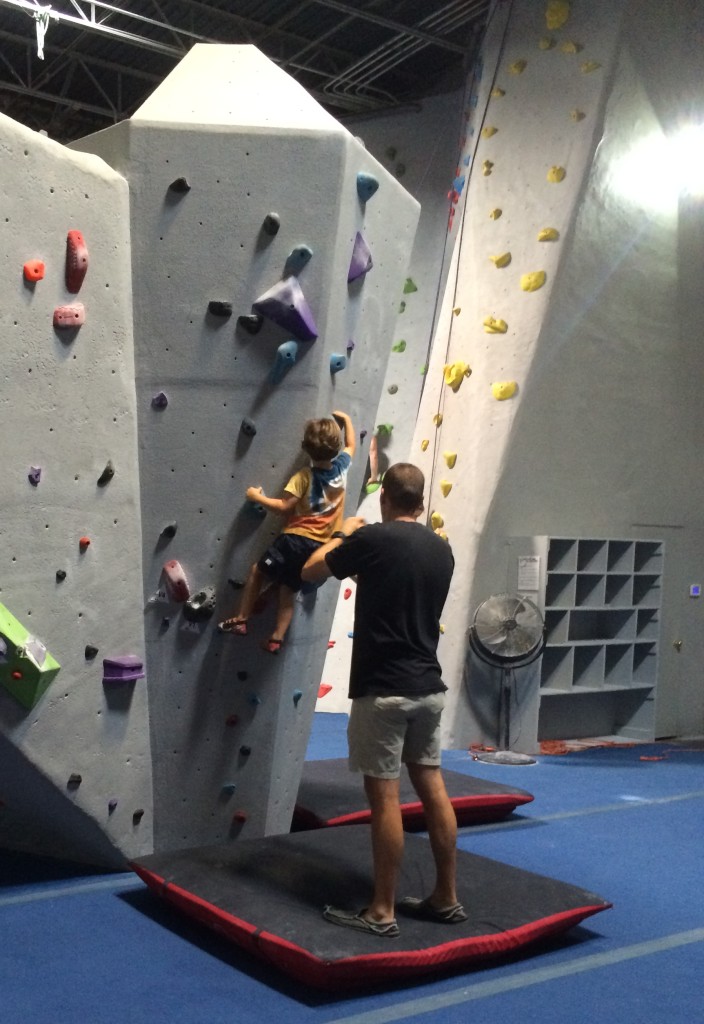 “BUT I WANTED TO SEND IT!!!!!!!!!”  A distraught Big C let out while fighting back big crocodile tears.  He was trying to put up a brave front on the way out of the climbing gym, but the waterworks let loose once we got to the car.

It was the end of Day 2 of Big C’s very first “legit” bouldering project (ie, only using holds that are “on.”)  For a while now he’s been able to climb the easier routes in the gym using the intended holds, but bouldering had always been a free for all “rainbow” session, using any holds necessary to top out…until last Tuesday.

He started trying one particular problem, and for whatever reason, decided that he wanted to try it using only the intended holds.  It was a short little V0, one that actually ended before topping out, although from the looks of it there would be a few committing moves for someone of his stature up at the top.  I helped him work out the beta for the initial moves.  There was a bit of footwork required to make a reach that was kind of intricate for a 5 year old to remember, but eventually he got it on lockdown.  Another big move and some high feet…he was almost there!  Then he reached that point in his session that most of us are probably all too familiar with – by the time you figure out the moves, you don’t have enough left in the tank to execute!

We walked away, and I promised Big C that we would go again on Thursday, just me and him, while Baby Zu stayed home with Daddy.  We talked it up, and he was PSYCHED!  Thursday rolled around, and he ate an extra portion of breakfast, telling me that extra granola would give him extra power in order to send.  He marched confidently into the gym, and it was all I could do to get him to warm up on the auto-belays a little bit before getting on the proj.

His first attempt he made it all the way to his previous high point…just ONE hold away from the top!  “Match your hands!” I called up.  “Then you can get your other foot up and reach the finish hold.” 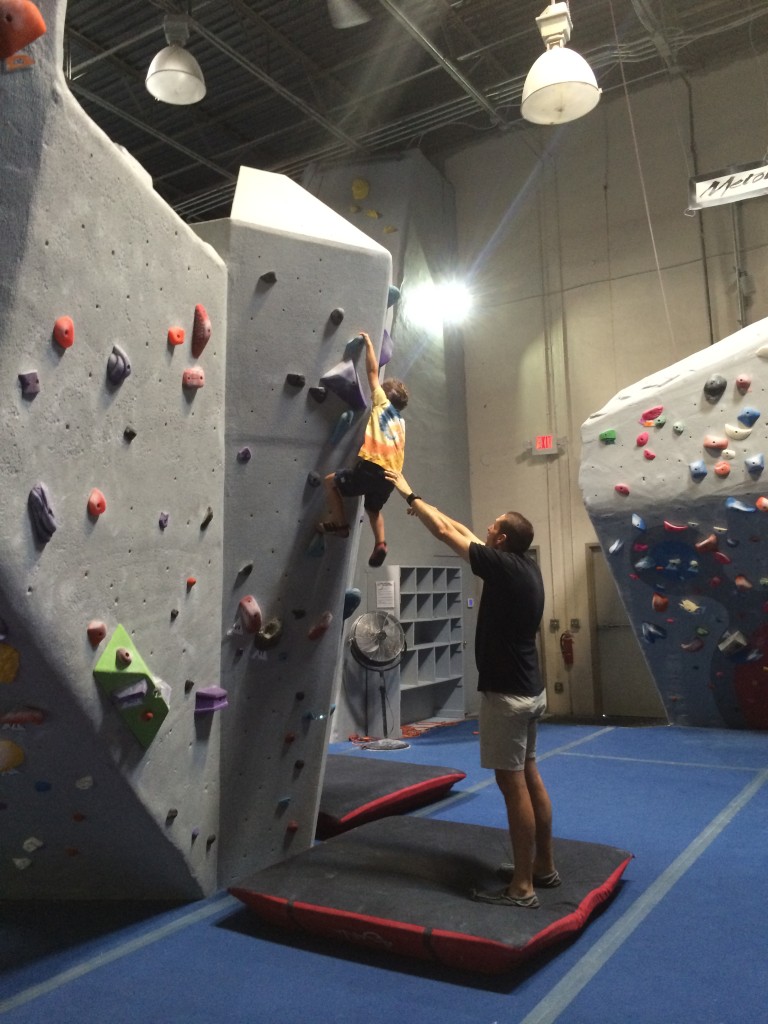 And then came another scenario that a lot of us are probably familiar with…the hemming and hawing.  “I can’t do it!” he whined, and dropped off.  This happened at least 10 times, with varying amounts of whining, down-climbing, and half-hearted reaching to the next hold.

Then the excuses started.  “I can’t match my hands because if I do that, I’ll fall!”  I tried to talk a little mental strategy with him in between burns (which, for a 5 year old in constant motion, is like 30 seconds max.)  We talked about what it means to fully commit to a move, and how we often have to TRY ANYWAY even if we think it won’t work.

After about an hour or so, I could tell he was getting tired (and therefore more frustrated).  Not to mention that the Crag-Daddy was working at home while Baby Zu was napping, and we needed to make it back before she woke up.  So I told him he had 3 tries left, all of which were unsuccessful, which brings us to the emotional breakdown in the van that I’d written about earlier.

We had a long talk that afternoon about success and failure.  As a mother, it definitely tugged at my heart strings.  (“I tried my very, very best, and I still couldn’t do it!” 🙁 ).  But as a climber, it was fascinating.  The more I listened to him, the more I realized that I was watching all of the emotions that I have at the crag on a regular basis played out in a 5 year old psyche!  I knew that any climber could relate to what he was saying, because we’ve all been through that journey – getting inspired by a line, investing the time to figure out the moves, having moments of self-doubt and issues committing to the crux.  Then finally trying HARD…and still walking away empty-handed.  It stinks!

Steve and I both try really hard not to push Big C when it comes to climbing.  The last thing we want to do is to pressure him into an activity that he’s not passionate about.  So at every opportunity I tried to make it clear that “not sending” is perfectly fine.  Try it again, or don’t.  Try a different problem.  Or just forget about climbing for a while.  But it quickly became apparent that all of those sentiments were falling on deaf ears.  NOT sending was NOT an option for Big C. 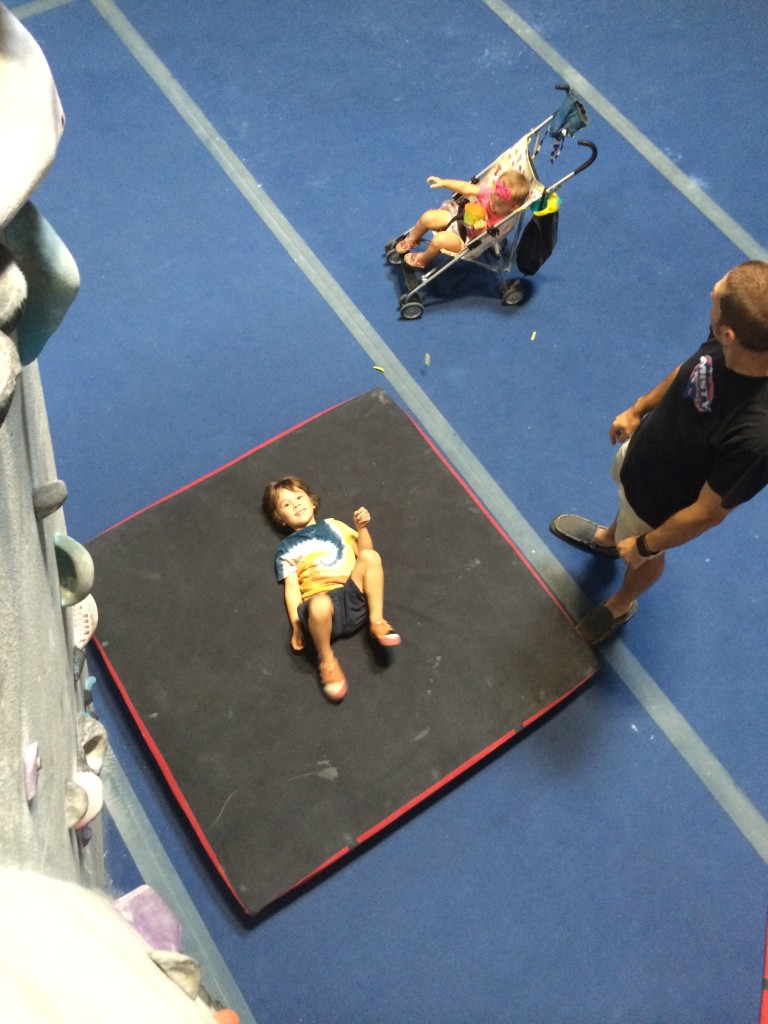 And we all know that feeling too, right?  When a route/problem gets in your head and you can’t rest until it’s ticked off?  That’s why it was no surprise to me when Saturday morning rolled around, and Big C announced at breakfast, “I’m going to send the purple problem today.”  (We had not even discussed plans to go to the gym at this point…)

And sure, enough, he did!  It took some coaxing to match those hands, but as soon as he did, he got a foot up and latched the finish hold in victory.  For the next 15 minutes he couldn’t stop talking about the play by play and how awesome it was.  Then he announced proudly that next time, he’s going to warm-up on the purple problem, because he “knows all the beta now.”  Raise your hand if you’ve been there…

One of my favorite parts about climbing has always been how easy it is to relate to other climbers, even if there’s a big difference in skill level.  Whether you project 5.9 or 5.14, the mental battles of keeping fear in check, risk assessment, and even staying motivated, are pretty much the same.  And apparently, it’s also the same whether you are 5 years old or 95 years old!  This single experience for Big C has already opened up so many lines of conversation about important “life lesson topics” – perseverance, determination, trying our best, patience, success and failure.

So I guess now I can add “parenting tool” to the already overflowing list of why I think this sport is awesome!  I’d wager that I’m not the only parent to use a sports analogy to teach their kids about life. Please feel free to share an example of a life lesson taught (or learned) through a favorite family pasttime.