Wow.  It has been TWO months since I last posted here…I think that’s a record!  Our summer has been busy, but mostly with family beach vacations and pool/water park adventures.  Exciting and fun?  Of course!  But fit for a climbing blog – not so much.  Speaking of climbing, fall is quickly approaching, and WE. CANNOT. WAIT.  Those first few fall trips are always like a bird being let out of a cage to see if its wings really work.  We’ve been gym rats all summer – hangboarding, core work, and even an impromptu bouldering comp.  Soon it’ll be time to get out and see if it did us any good. 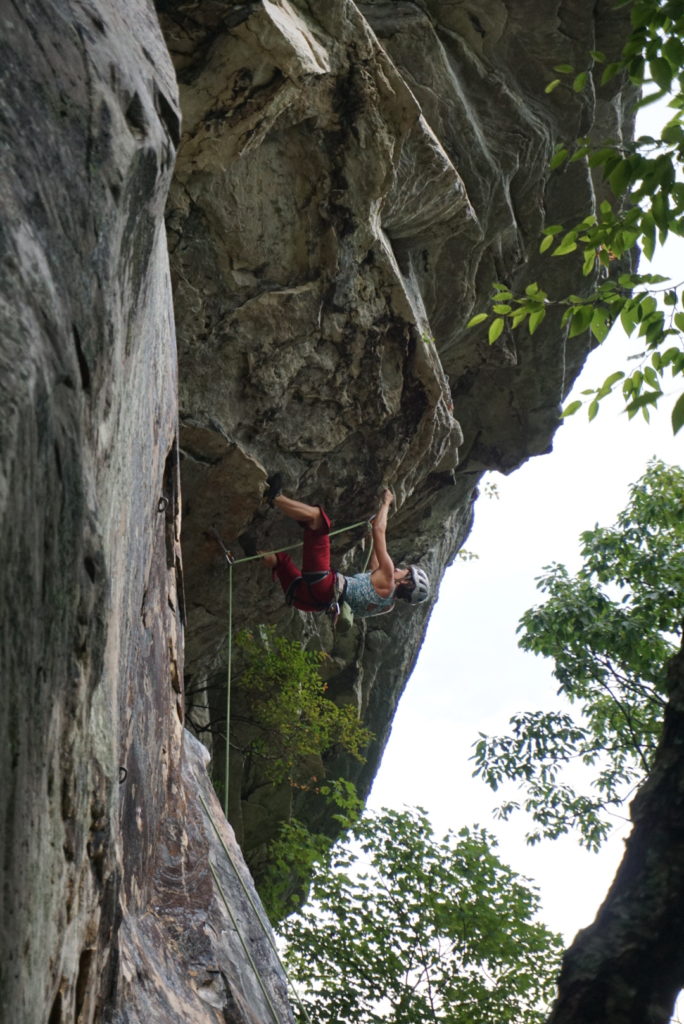 Getting horizontal during Mating Season 11d

We got a sneak peek at fall this past weekend…sort of.  With a few passing rain showers and a lingering mist over most of Saturday, conditions could hardly be called “crisp.”  But mountain highs in the 70’s at least made for more friendly temps than the typical smothering August heat waves.  We had no agenda other than to get back on a rope and get our family hiking legs back into shape. 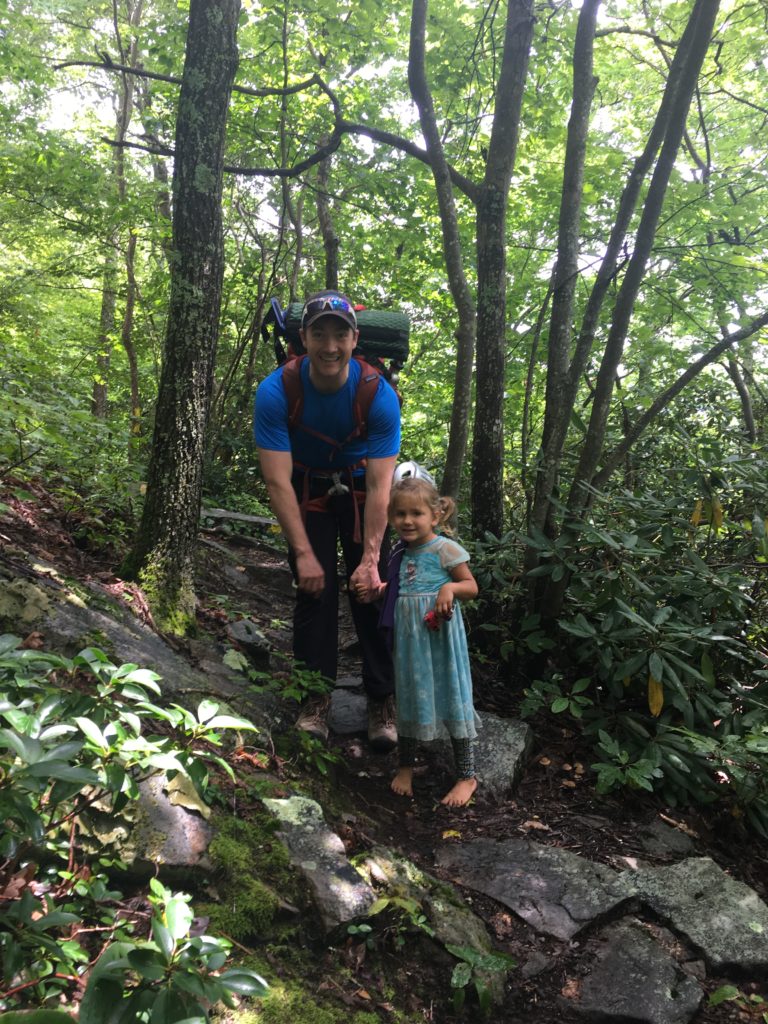 A happy little hiker with Mr. Nick, one of her faves.

Saturday morning the whole cliff was socked in with fog, and even rock that stays dry in a downpour was still wet due to condensation (aka “rock sweat.”)  But we managed to find enough pitches to satisfy us for one day.  Best route of the day was Mating Season 11d, a technical face that led to a big roof.  (You can also stop at the rainy day anchors before the roof for a great 11b face climb.)  We moved on after one attempt, but after seeing how wet everything else was, by the end of the day we were wishing we’d kept the draws on for a send attempt.  We also tried Trans-Vest-Tights on the Chocolate Wall, an 11a face climb with a 12a extension that climbs a steep, crimpy headwall.  CragDaddy bailed on the extension due to unforeseen wet holds, but his report was that it’s well worth returning to in dryer conditions.  (I, however, am not sold on the lower part…it was pretty heady in a reachy kinda way for both myself and our other climbing partner of similar height.)  Also worth noting on the Chocolate Wall was Fudge 12c, a 4 star route that was advertised as “probably 13a for shorter persons.”  Never hurts to try though, right?  CragDaddy and I were both feeling great on all the moves until reaching the last bolt.  Then we both got completely shut down.  Despite every combination of beta we tried, it seemed like we were always short one foot, one hand hold, etc.  I guess it’s back to the gym to train for that one…or maybe just not get back on it.  If I’m gonna put 5.13 effort into something, I’d like to get 5.13 credit for it ;). 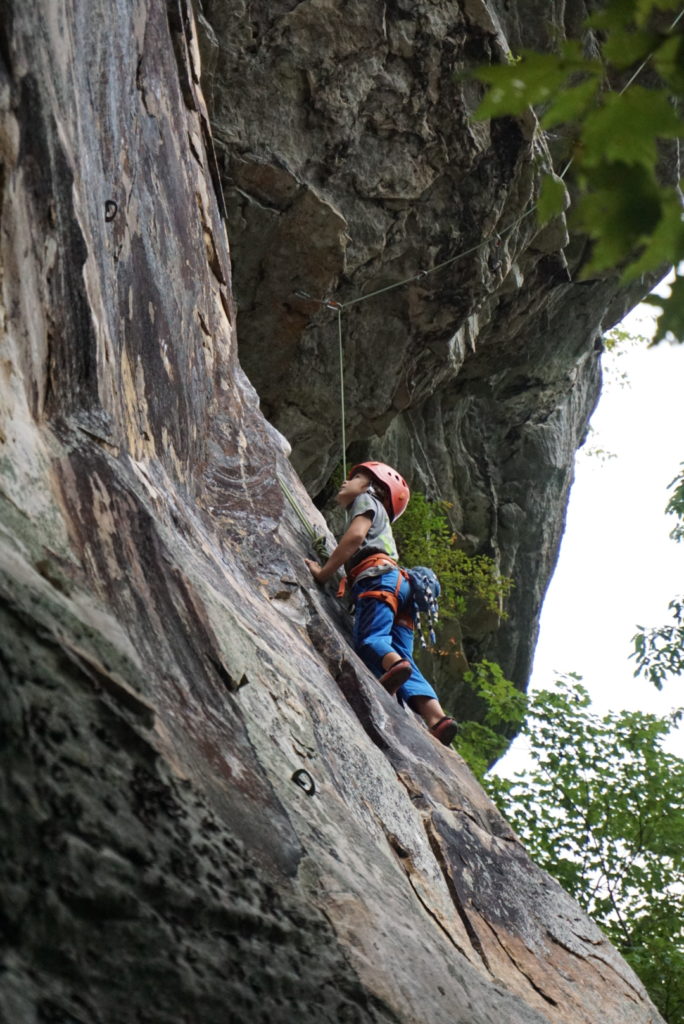 Big C contemplating life on the face of Stallion 5.5

Day 2 brought no rain and a lot more sun, and by the end of the day, all but the seepiest of routes were dry.  Turns out CragDaddy and I, as well as our extra partner, all got a second chance sending go at Mating Season (well, 2nd AND third chance for me due to a hand hold breaking mid-crux, but it eventually went!)  We also thrashed around on the classic Blues Brothers 12a.  Definitely a good climb worth coming back to, but I’ll wait til the fall when the giant, furry spiders are all hiding away too deep for my hands to reach. 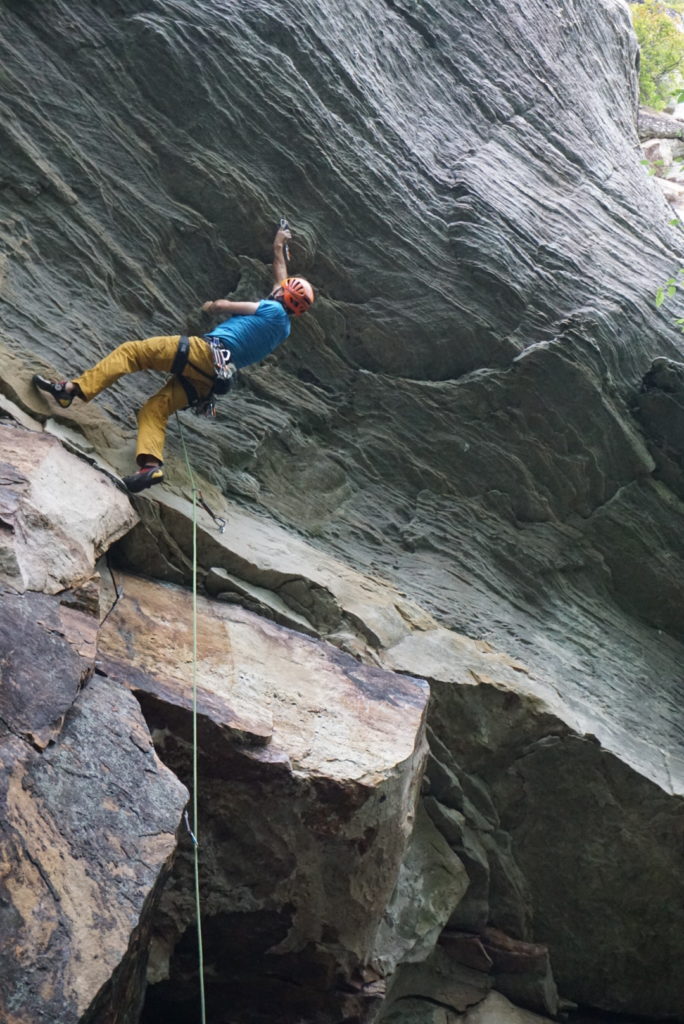 CragDaddy working through Blues Brothers 12a

Last climb of the day was Meatballs 5.12a/b, a short but sweet line on the (you guessed it…) Meat Wall.  It shares a start with another classic – Possum Tongues of Aspic 12c, that we are potentially interested in for this fall.  Both climbs begin with a full-wingspan move that was actually far easier than it looked, then the former takes a right across a sea of incut crimps, while the latter tackles the blunt arete.  Considering it’s still “pre-season” and my endurance is no where near where it needs to be yet, I felt really good about making it to the last bolt (crux) on my flash attempt.  Meatballs packs A LOT of movement into a relatively short expanse of rock – great for training finger endurance.  I rehearsed the upper half of the route as I lowered and got it all clean, so I felt optimistic about a 2nd go send, but I wasted too much time looking for a foothold midway through, and found myself falling just before I could latch the finishing jug.  I’ll definitely get on it again this fall, when hopefully I’ll be in better shape and it’ll go down pretty easily. 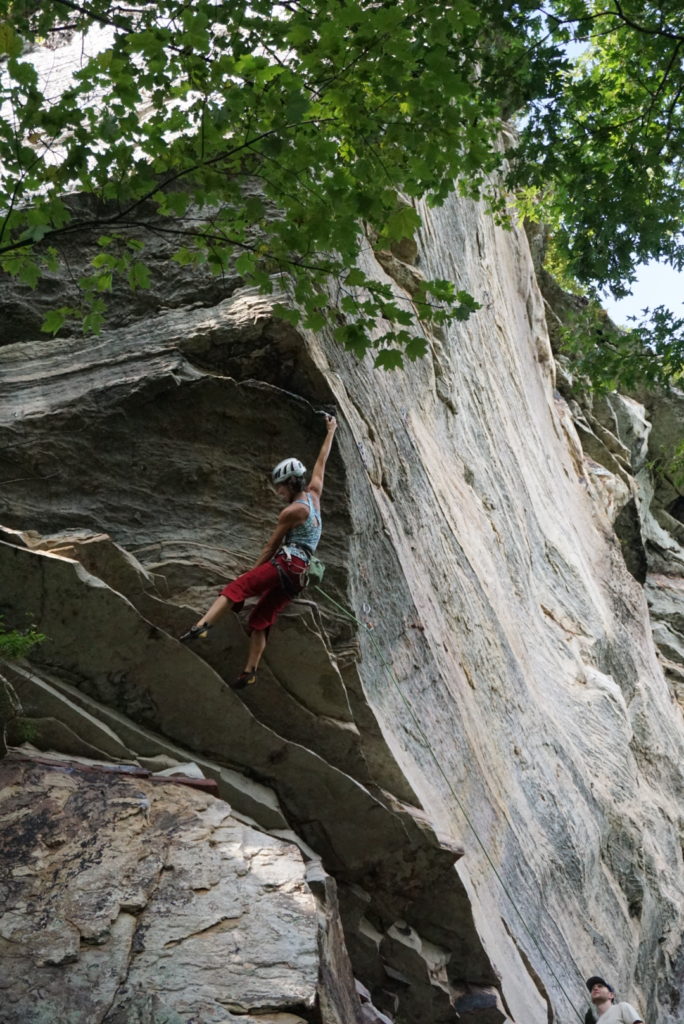 Can’t wait for SEND-tember!  What projects are YOU putting work into this fall?

1 Response to “A Bit of “Pre-Season” Climbing…”