So after a patriotic day at the rodeo on the 4th, the next day was back to the canyon for business as usual.  As I said in Ten Sleep Recap Part 2, the 3rd day on in our 3 day chunk was spent scoping out the moves on Superfly 12c/d at the Slavery Wall, so let’s rewind back to there for a minute.  The main difference we noted between Slavery Wall and everywhere else we had climbed was that it was WAY hotter in the morning, due to the lack of tree cover at the base of the cliff.  Thankfully though, our main objective climbed an east-facing corner, so it went into shade earlier than everything else. 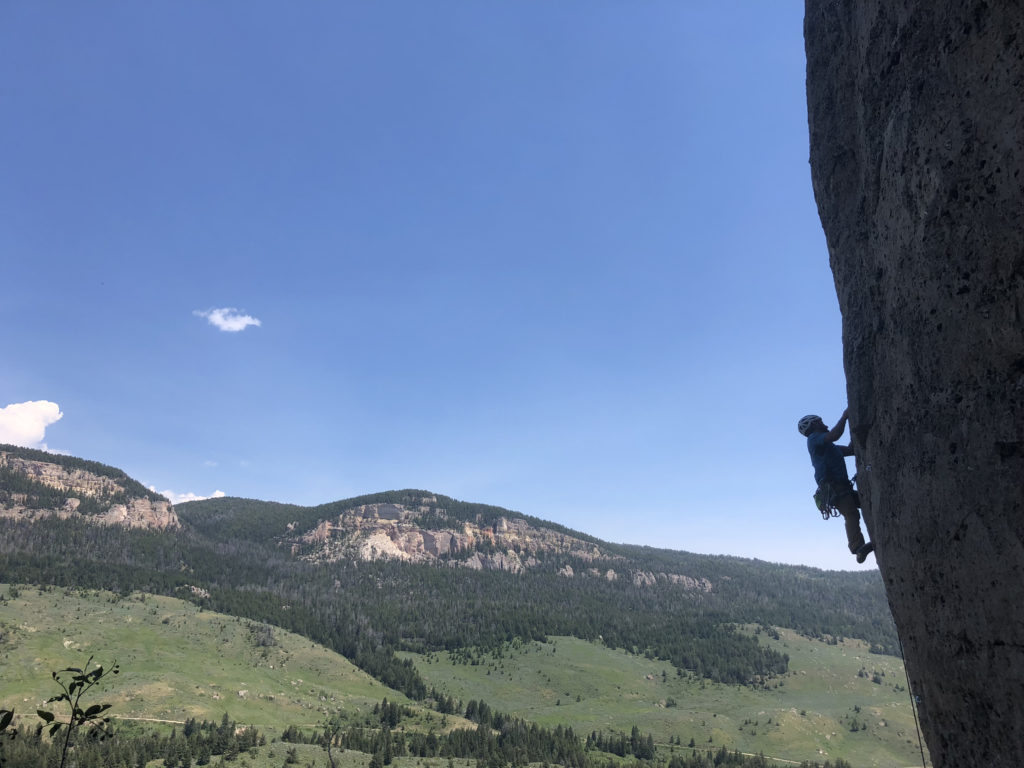 Some new found friends on the 11a beside Superfly

On our reconnaissance day, we warmed up on a route everyone that ever climbs in Ten Sleep Canyon simply must do once – Beer Bong 10b.  The face climbing on it is pretty polished in places, and the movement is just okay.  But the exposure and position out over the chimney in the last 15 feet is what earns this route its stars.   For a more interesting perspective than the typical crotch shot at the finish, we decided to take the drone up to capture some better angles while waiting for Superfly to go into shade (video here.) 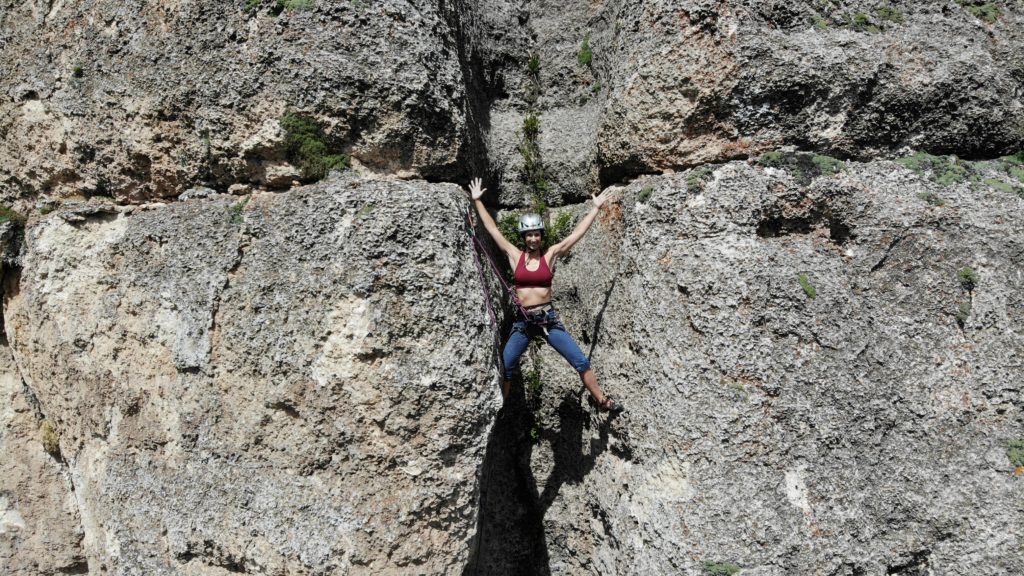 Hanging draws on Superfly was exhausting – 100 feet of technical climbing that demanded focus for almost every move.  After an hour (and a lot of stick clip hauling), I gave up two bolts from the top.  CragDaddy took a turn, and while he was able to clip chains, it wasn’t without aiding through the crux lurking right before the anchors.  To be honest I was a little discouraged tying in again, this time on toprope so I could work the crux more efficiently.  But my second run went awesome – I actually linked most of the lower section.  And though my initial attempts at the final sequence were pretty dismal, I ended up finding a pocket that CragDaddy had missed before – it made the move juuuuuust doable enough for me (though I had my doubts as to whether that beta would work coming in hot on a redpoint burn.) 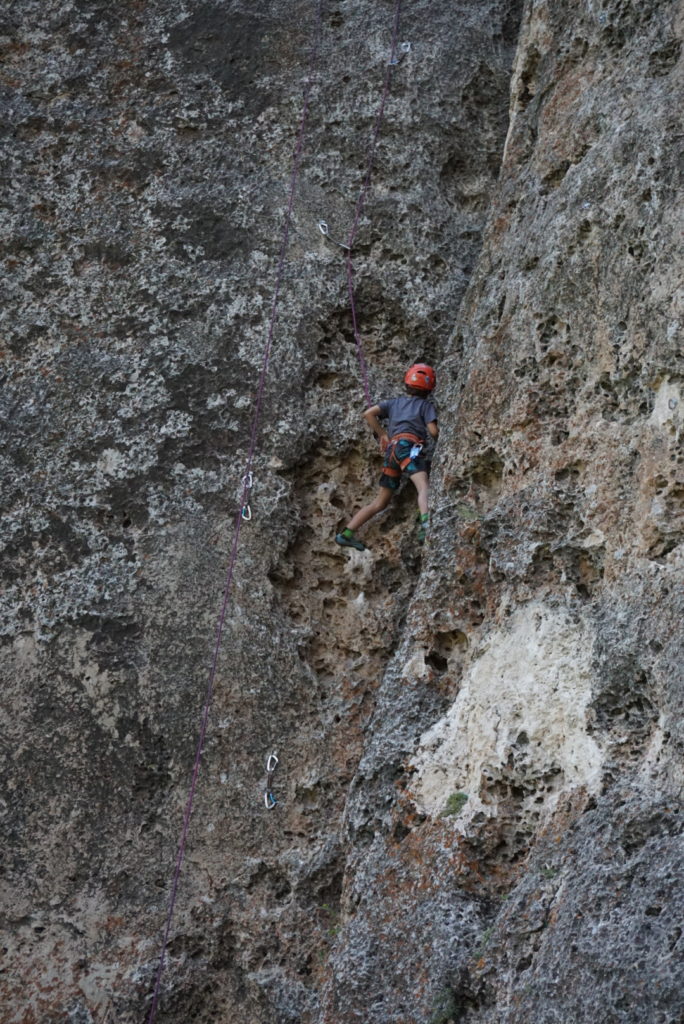 Knowing that a 3rd burn on a 3rd day on would likely do nothing but further rip my skin to shreds, I opted to quit while I was ahead, in the hopes of coming back a muerte on our final day in the canyon.  So fast forward past the rodeo, and past another day at FCR.  Last day equals last chance, so nothing like a little pressure, right?  The morning dawned sunny and hot, as the temps had steadily been rising since we’d arrived 10 days prior.  Although it would for sure be much cooler in the canyon, highs in the town were forecasted at 100!  That said, no one was in a rush to get up there right away, considering the lack of shade.  So we took a nice drive through the old road in the canyon, stopping here and there to play with the drone and take some token Christmas card pics.

When we finally made it up there, we opted for the Red River Gorge strategy of warming up – a bolt to bolt run on the project.  Superfly is not a terrible warm-up option – the difficulty builds very gradually, with nothing harder than 11a in the first 40 feet.  Then come two back to back cruxes, the first being a hard lock off, the second using a series of insecure feet.  More long moves on decent holds leads to a pretty solid rest stance at 80 feet , followed by a little more hard 5.11 filler before setting up for potential heartbreak at the anchors.

Having only had one run at it before, and therefore needing more beta refinement than me, CragDaddy offered to hang draws.  A welcome gift, especially considering that a lot of my tick marks had washed away during the freak deluge of rain from the night before.  Using the new hidden pocket I’d found the previous day, he also was able to do the final sequence, and lowered down feeling more optimistic about his send potential. 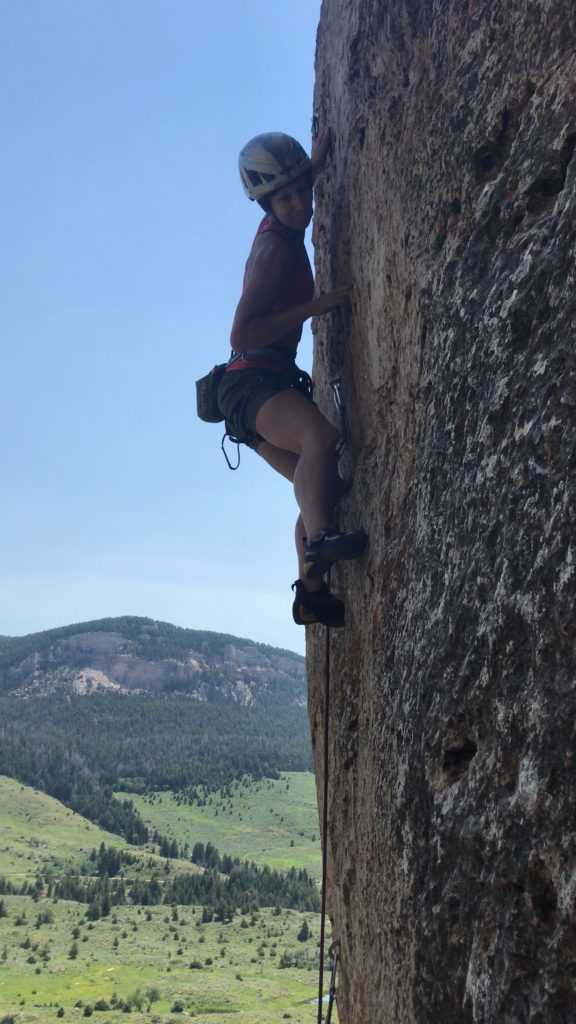 Down low on Superfly

My strategy for the first run was to climb like I’m sending until it becomes apparent that I’m not – ie, don’t get sloppy, and don’t get flash pumped.  I executed well, remembering most of my beta.  I got stalled out in the 2nd hard sequence, but managed to make it through and up to the rest.  After getting as much back as I was going to, I proceeded, til I was one bolt from the top, staring down the gauntlet of the final sequence.  I took a breath, pictured the moves then executed – Crimp, crimp, pocket, mono, make clip.  Done.  Get feet up and reach high for the hidden pocket – got it!

I was almost out – all I had left was to bump my left hand to a better hold, smear my feet really high, and toss to a flat hold where I could then mantle to the chains.  But in my haste to hit the hidden pocket, my feet were lower than they were supposed to be.  Also, my right finger was sliding out of the shallow mono, and I was way too insecure to re-grip.  Not to mention that ever present pump clock.   Despite the fact that one of the cardinal rules of redpointing is to STICK WITH YOUR BETA on a send attempt, I just knew my original beta was done for.  I needed to go Rogue.

Now Rogue Beta is a slippery option that can only end in one of two scenarios – you either feel like a genius for making a wise, in the moment choice, or you feel like a chump because you hesitated and didn’t execute correctly.  Honestly it’s usually the latter, but I felt like I had no choice.  Instead of going left hand to the better hold, I went right hand, which allowed me to leave the mono early.  However, the hand mix-up cost me.  Not only was the mantle more awkward, it also left me out of reach of the finishing holds!  Panic started to set in again – the chains were literally at eye level, but too far to the right to clip.  True confessions – I thought about grabbing the quickdraw, but I knew I would hate myself for it on the ground, and that after all the effort I’d just put in, I couldn’t count on getting there clean again.  It really was now or never.  I held my breath, stepped my right foot level with my right hand, and precariously started to rock over, praying a gentle breeze wouldn’t blow me off.  Right when I thought I was about to tip backwards, I felt my center of gravity settle over my feet, and I could stand up.  Clip chains = DONE! 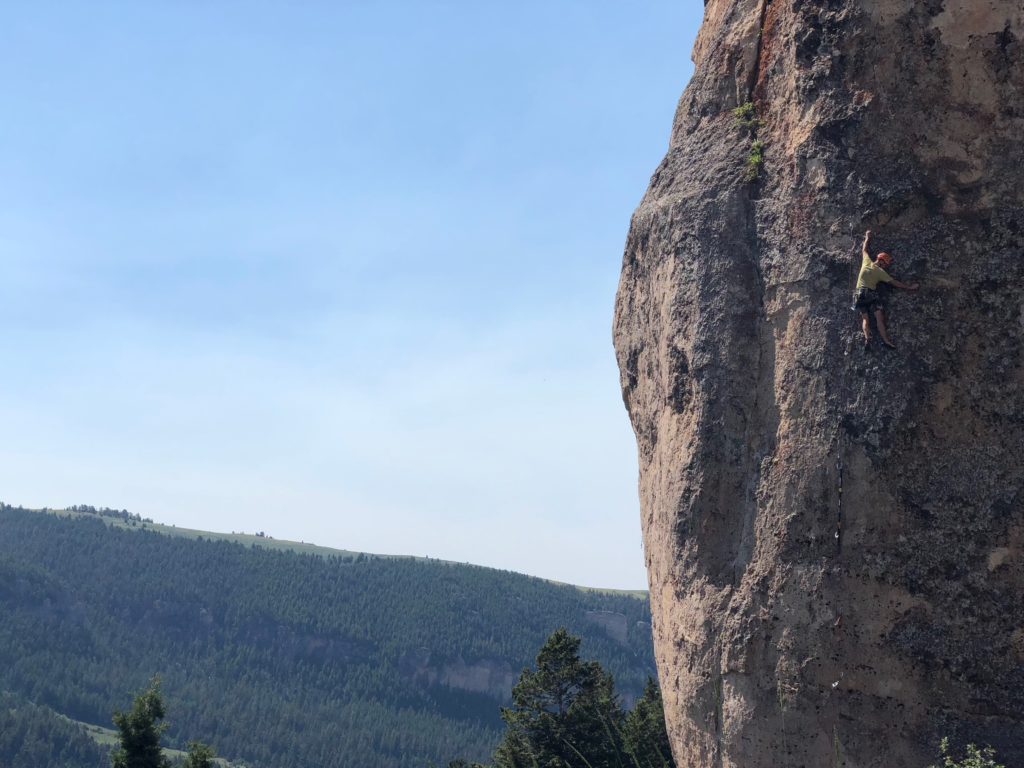 CragDaddy sent on his next go as well (with far fewer dramatics.)  After a nice long break, he got some revenge on another near miss from 2015 – Strut Your Funky Stuff 12a.  Even Big C got on the send train with his toprope onsight of Shake Your Money Maker 5.7.  I was hoping for a similar effect on Momma’s Mental Medication, also 12a…but I fell going for the final pocket.  Womp womp.  That said, nothing could dampen our day too much.  It was a grand ending to an even grander trip! 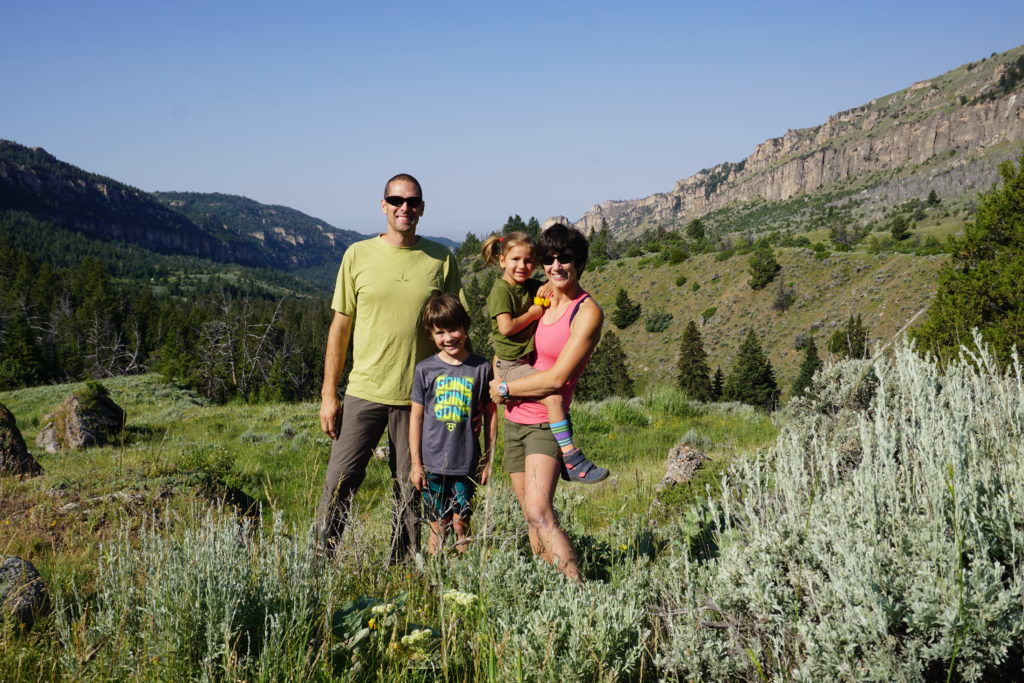 Me with my favorites.

Initially, we had thought that this 3rd time to Ten Sleep might be our final time.  After all, there is so much rock to climb in the United States, it hardly seems fair to keep our pilgrimage in the same spot…but guys, I just don’t know if we can give up going to this place!  Especially now that the kids are older and are so vocal about how much they love it.  One advantage to growing children however, is that road trips are a lot easier now…and with homeschooling, it’s pretty darn easy to take our show on the road.  So who knows, maybe next time we’ll drive?  Anyone got any fun ideas for stops along the way?  For now though, it’s good to be home.  See you at the New this fall!