I am quick to profess my love for the New River Gorge.  It is the gold standard by which I measure all other crags against.  I’ve been climbing there since 2007 and it just never gets old.  But for all that love, there’s just as much frustration, as the nature of NRG climbing seems to know just how to expose both my strengths and weaknesses, sometimes even on the same route.

Generally speaking, the New is known for being “reachy,” and is stereotypically harder for shorter climbers.  This is the major reason why the really strong climbing team kids mostly go to the Red.  This also helps explain why there have been countless female 5.14 ascents at other major climbing destinations, but only 2 women can stake that claim at the New.  (And those achievements have only been in the last few years – prior to 2015, the New had seen one 13c ascent by a female, despite lots of 13b’s.)  Obviously, as routes get more difficult, there is an expectation that the distance between holds could get larger.  But at most other areas, there will often be intermediate handholds or a higher foothold to mitigate the height factor.  The rock at the New is less featured, and it’s not uncommon for everyone to be making moves off the same holds.

Hangin’ around on Yowsah 12a

As for me, one of my only two 5.13’s was at the New – The Ruchert Motion 13a, sent in December of 2017.  But aside from that, my hardest NRG sends were 12b’s.  And considering that Ruchert is an 89 degree slab where the crux was all about footwork and terrible holds (aka everything I love), it has been easy for me to write that one off as an anomaly.  With that obvious exception, I’ve sort of considered 12b to be my ceiling at the New, and have rarely ventured on anything harder.

But a season training with Power Climbing Company last year has inspired me to think bigger and try harder.  Since then I’ve been throwing myself whole heartedly into working on my most obvious weakness – big moves requiring big power. 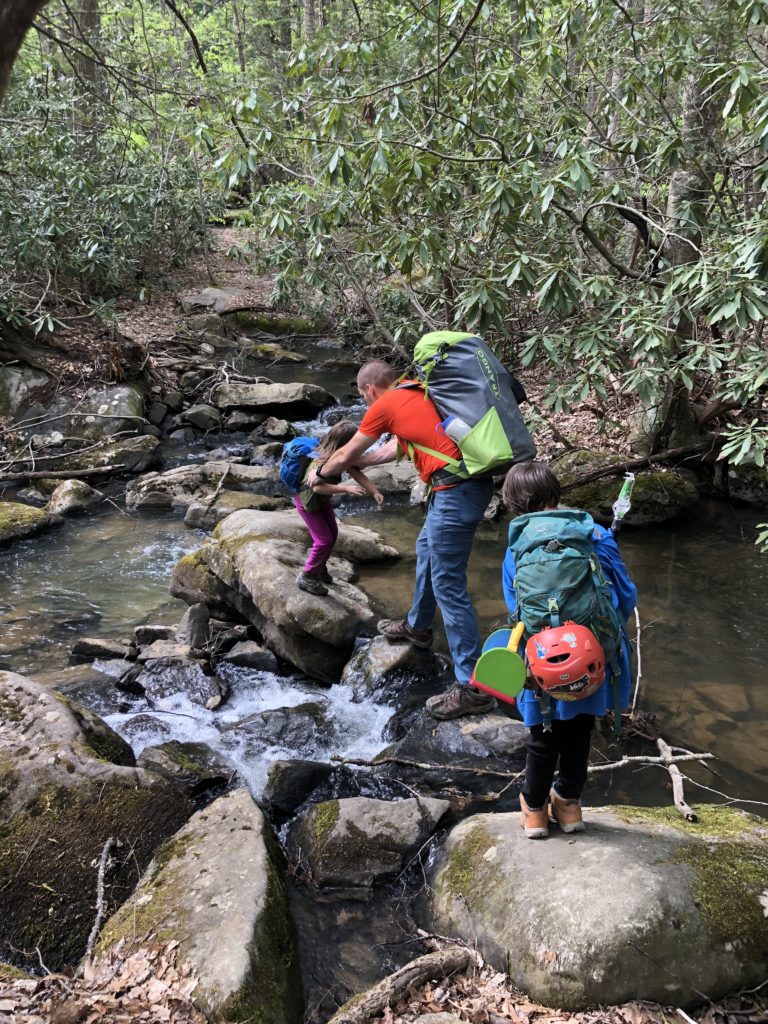 I was greatly encouraged to see my training paying off a few weeks ago when I was able to do all the moves on Green Envy 12c on my first day of working it.  I even managed a 2 hang…but all on toprope.  There is a fairly big, fairly swinging fall potential between the 3rd and 4th bolts, and I can sometimes be a fairly big pansy.

Anyway, after finally finding a 12c that seemed both doable and enjoyable, I was psyched to see a cooperative weather forecast this past weekend.  Unfortunately, the rain from the night before had drenched all warm-up possibilities, which meant we had to warm up on the project.

There was a lot of stick-clipping, pulling on draws, and other shenanigans that are common when your warm up isn’t really a warm-up, but at least the rock felt great.  Conditions were supberb, save one key jug with a puddle in it.  We stuffed a microfiber towel in it to suck up the water, and it was good to go!

With my second attempt came the debate over leading vs toproping.  After the “warm-up lap”, plus several crux rehearsals on the way down, I was feeling pretty good about all the moves except the initial boulder problem I’d had to skip (and couldn’t lower back to.)  Most importantly, I’d yet to come anywhere close to linking the crux into the run out, and the thought of heading into that terrain pumped made me feel a little nauseated.  If I led it, I was pretty certain that I would automatically hang at the crux bolt. 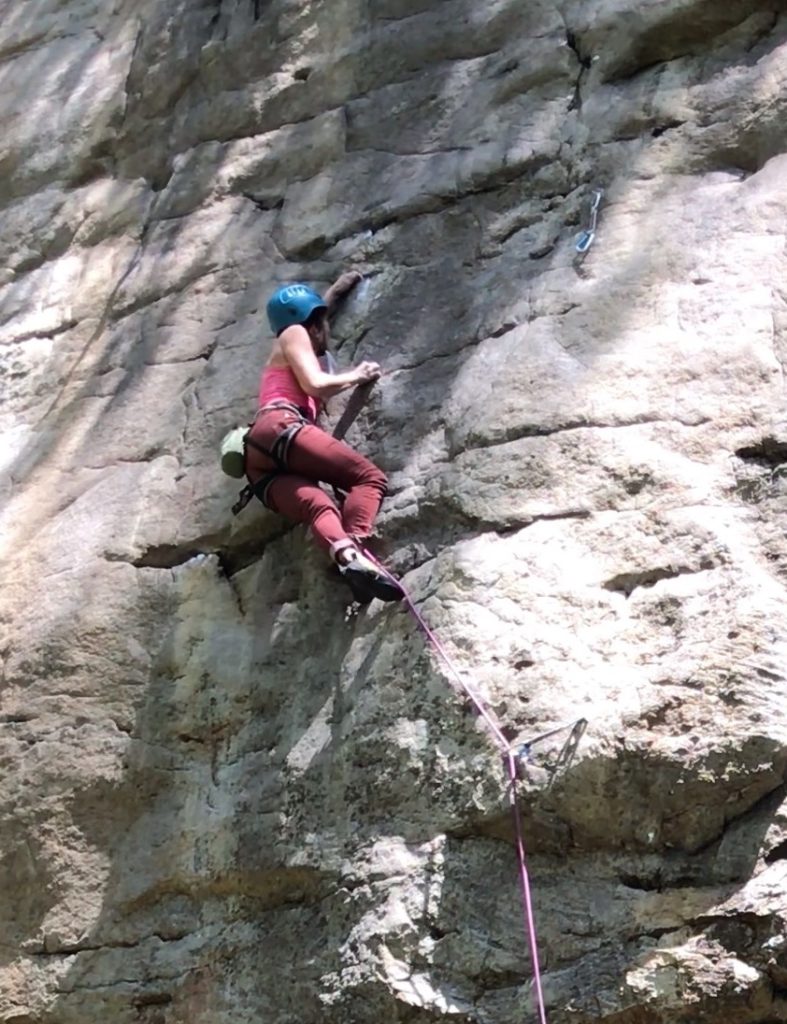 Hitting the jug slot after the runout.

After a lot of hemming and hawing, I decided to have one more “dress rehearsal” on TR before giving it a redpoint go.  I knew I could give it hell on TR, and get a realistic picture of how the runout would feel physically when it’s go time..  Once I’m in redpoint mode, I’m not thinking about the fall anyway, and I figured the confidence boost of a long TR link might be more beneficial than a hesitant lap bolt to bolt.  (Honestly you guys, the fall is probably not that bad.  I’m not trying to make a huge deal out of it, just trying to be authentic on the blog!)

Sure enough, I TR’d it clean, with only a slight pang of regret when I made the final hard move and stepped into the rest before the 5.10 terrain leading to the top.  It’s all part of the process.  If I did it once, I could do it again – and most importantly, because my brain wasn’t cluttered up thinking about the falls, I was able to find a surprisingly good shake out stance a few moves before the runout, which assured me I wouldn’t be doing scary moves with a scary pump.

After a nice long rest, it was time to git er done.  The initial boulder problem went well, as did the second crux just after that.  I sunk down low in my newly found rest stance and slowed my breathing.  I moved smoothly into the runout section, but when it came time to rock onto the high foot and latch the side by side crimps, the filtered sunlight blinded me for a second, and my right hand accidentally found the hold my left hand needed.  I discovered my mistake when I tried to bring my left hand up and there was nothing there, but after a flash of panic I just flagged my left foot harder and locked off to the clipping hold…crisis averted!

The final test was a very powerful sequence launching out diagonally to a big pocket.  The move requires every millimeter of reach I’ve got, and is exponentially harder to do when pumped, but this time it was more solid and controlled than I’d ever done it. 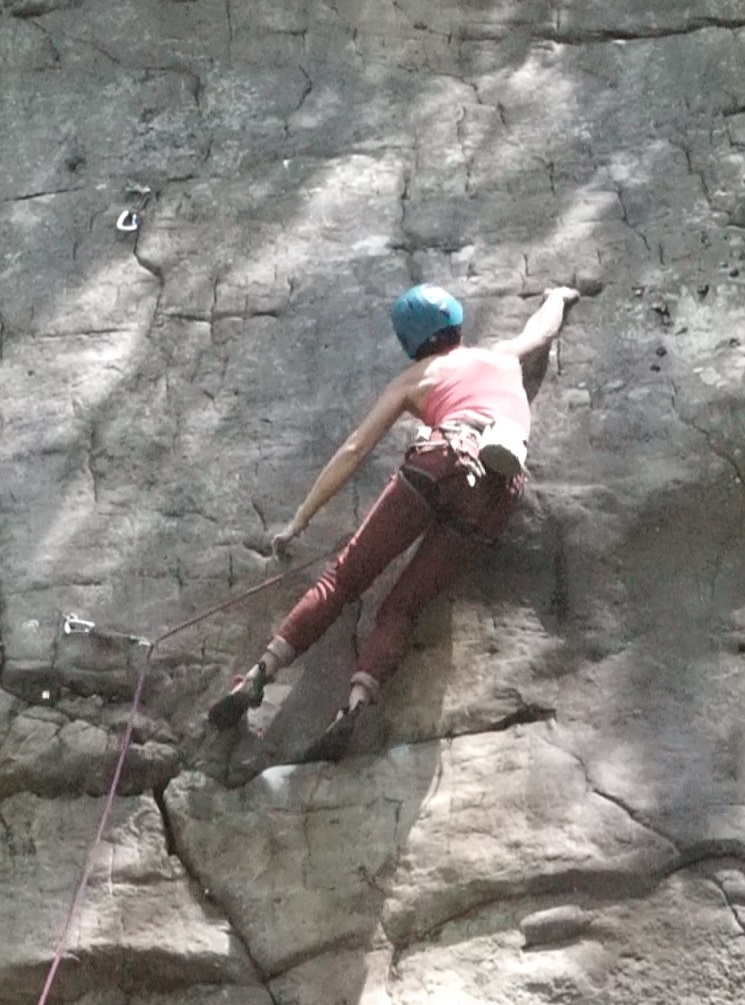 Another couple of lock offs and a bobbled clip on a twisted draw had me coming in hot to the last rest, but I was able to get it all back and finish it up.  Yay for first 12c at the New!  Also, if anyone is interested in the video, you can check it out below…beware, I climb like a sloth, so I’m not offended if you need to fast forward to the good parts! 😉

As for the next day, what better way to stay balanced after a hard send than to get on something that exploits all your weaknesses?  After hanging draws for my man on Out of the Bag 11d, and trying out Not on the First Date 11c, I headed over to The Hole to get stomped on Yowsah 12a.  It went about as I expected, although I made significant progress between my first and second attempts.  I’m not gonna move heaven and earth to get back to it, but if opportunity presents itself, I will definitely get on it again!  After all, who doesn’t love a long whipper that’s nothing but air!!!