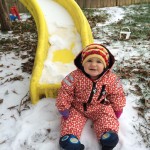 Earlier this week we Southerners got pelted with our annual “snow storm.”  Every now and then (like last year) we actually get a little bit of snow out of it.  This year was more typical, in that a few inches of snow were initially predicted…which of course led to frenetic grocery store runs for bread and milk…and then all we ended up with was about an inch of sleet and freezing rain.  But to kids (and grown-ups..) who only see snow once a year, any white stuff that attempts to cover the ground is considered snow, no matter how crunchy (and slippery!)…Read the rest of this entry →