What are the odds that a sunny January day in the 50’s would line up with a day off???  We had no choice but to go climbing!!!  We headed west before the sun came up and met up with our friends Marc and Marie, who we met at Triangle Rock Club.  Steve had taken Marc on his first outdoor climbing excursion about a year ago at Pilot Mountain while I was rehabbing my shoulder, so it seemed only fitting that we also were there for his girlfriend Marie’s first time roping up outdoors!  We had a cold start to our day – in fact the gate to the summit at Pilot was closed due to icy conditions (?) when we first got there.  The person at the visitor’s center at first said we would have to wait “no more than two hours” (after we’d already driven for 2…) but we actually ended up only having to wait about 20 minutes. 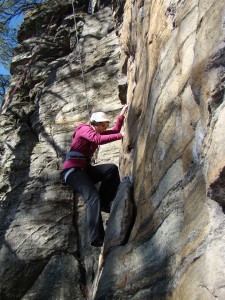 Marie concentrating on good footwork on the Papa Bear face

Here’s what we did:
Scarface:  5.6   We let Marie go first so she could get the “toprope onsight” and I think that really helped boost her confidence.  The temperature was rising, but the sun hadn’t come around the mountain yet so the rock was COLD!
Body Surfin’: 5.7+  One of me and Steve’s favorite warm-ups 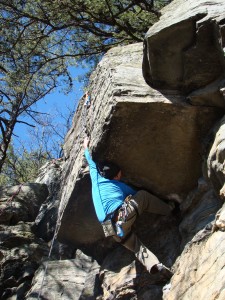 Steve matching in the crack with the hand/foot jam!!! Here's the +3 ape index in action! 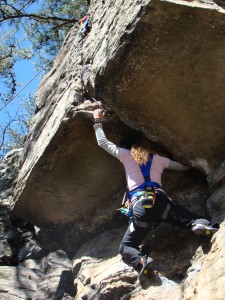 Not quite the same reach as Steve...

Since it was probably the first time in about 50 years that we had seen the 3 Bears Area not jam-packed with boy scouts (and since it was in full sun at this point), we decided to head back up there to stay warm.  🙂 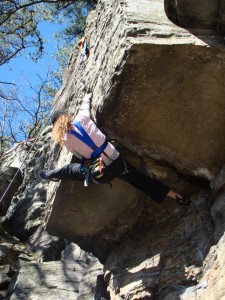 ...but fortunately I've got loose, flexible hips these days to make up for the reach!

Baby Bear:  5.11a
Papa Bear:  5.10  This was by far my highlight of the day.  I looked back at my climbing log and realized that the last time I tried this route was in February of 2008.  I was really frustrated with it, and vowed that I would never try it again – it was too reachy and I was too short to make the move, my hands were too small, blah, blah blah.  Anyway, when Marc and Steve really wanted to get on it, I figured I’d just watch.  I’m 7 months pregnant, the crack in the roof was DRIPPING wet, and the last time I got on it it felt impossible – it didn’t seem like something fun for me to do.  But Steve did it, Marc did it, Marie made it up until the roof part, and the couple beside us were planning on having a go at it, and I felt left out that “everybody else was doing it.”  So I told Steve that I would give it one half-hearted try, but that “when” I fell at the roof, I wasn’t going to do any sort of shenanigans to try and get back on.  And lo and behold, I got it clean!!!  My fist jam and armbar felt really solid even though everything was wet, and evidently I had just enough core strength left at this point to keep myself from swinging way out when I released the jam.  YAY!!!
Mama Bear:  5.10d   I bailed at the roof.  My big ole belly was not liking any of those moves.  🙂

Marc finessing his way up Overhanging Hangover - a stellar performance!

Overhanging Hangover:  5.11b   Oh, what a relationship I have with this route!!!  I have probably whipped off of this route more than any other route I have ever done (and if you’re familiar with the route, you know the spot!).   I have literally stayed awake rehearsing the crux sequence in my head, fallen asleep, and dreamed about this route, move for move.   I have analyzed my beta in detail (changing it several times) until I finally was able to pull everything together and get the redpoint in November of 2008.  I’m not sure why I feel such a tie to this route – its certainly not the hardest route I’ve ever done, nor is it the most enjoyable.  It’s not at my favorite crag, it doesn’t even have a serene wilderness view at the top!  But for whatever reason, I guess b/c its local and it’s always open to get on, I think I’ve put more effort into this route than any other.  So of course it only seemed fitting that at some point in my pregnancy I would have to get on this route!  Marc put it up for us in great style, and since I was on the safety of a toprope this time, I decided to try a slightly different line than what I usually do on the lower portion of the route.  I had to hang and rest twice (I knew there was no way I could get it clean dragging up the C-Squatch along with me!) but I had a blast on it, and was really proud of myself for finishing the route! 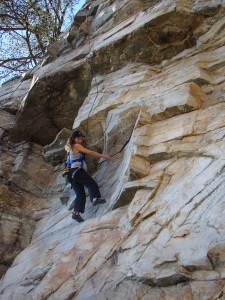 By far, however, the funniest part of the day happened in the car on the way home.  The 4 of us are riding in the Element on I-40, minding our own business, when a car pulls up beside us.  Steve looked over at the car, and the driver had a huge smile on his face.  We thought that was a little weird, but he kept looking, so Steve kinda gave him a nod, and the guy proceeded to reach into his front seat and lift up a QUART SIZE ziploc baggie of weed…he then pulled in front of us, put his flashers on, and got off at the next exit.  Considering that the amount in his bag was obviously more than just for personal use, we can only assume he wanted us to follow him off the highway to play let’s make a deal… 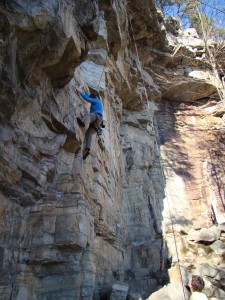 Steve working up the face on Overhanging Hangover

All in all it was a great day!  For me it was a little unexpected – things I thought I would not be able to do at 7 months pregnant – like the Papa Bear roof, and the Overhanging Hangover crux – went down pretty easily.  However, other things that I had expected to feel a little easier took a lot out of me – I was really pumped after Baby Bear, and hadn’t expected to get shut down on the Mama Bear roof.  (And I also didn’t expect to be offered drugs in the middle of the freeway…)

It felt great to get outside and enjoy our day off from work in God’s creation.  The last few times we’ve gone climbing outdoors I keep thinking to myself – “This may be the last time before the baby’s born…”  I think that’s part of why I’m having so much fun, realizing that I have been blessed with a (so far) uncomplicated pregnancy that has allowed me to continue to stay active and to do the things I love!  People keep asking me when I’m gonna stop climbing, and I usually say that I’ll stop when its not fun anymore.  I expect that things will get really uncomfortable at some point when I get huge, but so far, so good.  I’ll enjoy everything I can get until that time comes! 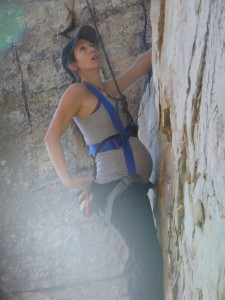 Me, C-Squatch, and the Big Blue Seatbelt

2 Responses to “Spring in January?”