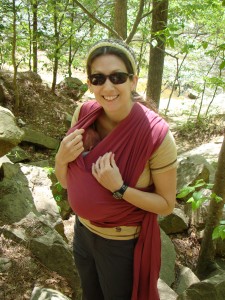 All strapped in and ready to go!

So we have a tentative goal to get Canaan out on a climbing day trip sometime towards the end of May.  To do this, we figure we need to take lots of baby steps (no pun intended…:) ) in order to make sure he is ready for the long haul of a whole day out and about.  We started out by taking a hike with BeBe and Papa Joe last Friday in celebration of his due date.  It was a leisurely3.5ish mile hike along a smooth trail.  It took us a little over an hour – so not really any more committing than our daily walks down to the lake, but we did experiment with the BabyBjorn carrier rather than the stroller.  To read about that adventure and see pictures, click here. 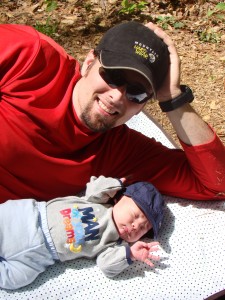 Fun in the sun with Daddy

We decided that this weekend we would up the anty a little bit, and see how the C-Squatch would do with a little more of a challenge.  Our goals:  outdoor feeding, outdoor diaper change, hiking with the Moby Wrap, and a family picnic.  We opted for the Company Mill Trail at Umstead Park.  Canaan really seemed to like the Moby, and it was really comfy for me as well.  The nice thing about the Moby versus the BabyBjorn is that it supports more of his bottom as opposed to having him dangle by his crotch…It was also much easier to shade him from the sun with the Moby, b/c I could just pull the flaps of fabric over his face and keep him covered. 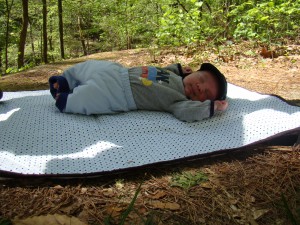 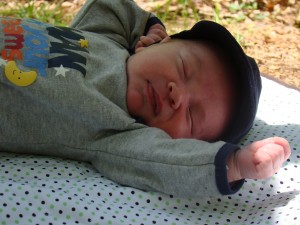 Dreaming of being Superman!

We found a fantastic picnic spot along the river.  One thing that we have noticed is that whenever we are hungry, Canaan is hungry also, so that means Canaan eats first (Canaan is also hungry when we are sleeping, showering, watching TV, and trying to finish up blog posts…) Nursing in the Moby Wrap was actually kinda cool, once we figured out which straps to loosen and which ones to tighten – I could actually nurse him hands free (which meant I could eat at the same time!)

and there was so much extra fabric that I was able to be completely covered up. 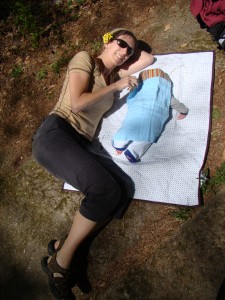 Me and Canaan relaxing while Daddy plays on the boulders

There were a few fairly large boulders all around where we decided to picnic.  They were all low angle slab (we both decided less than V0, probably closer to 5.6…) but it was the first time that I had bouldered anything since about 18 weeks pregnant, so I had loads of fun!  We took turns eating, watching Canaan, and playing around on the rocks for about an hour, before we strapped Canaan back into the Moby and continued our hike. 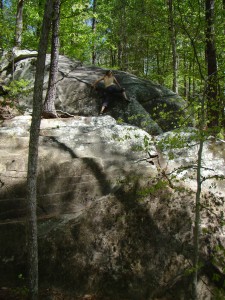 Having fun on the slabs! 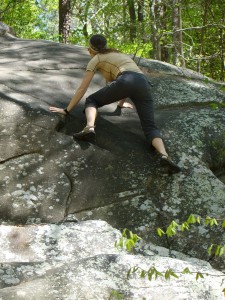 It sure did feel good to be on the rock again!

Sure enough, after another 45 minutes or so of hiking, Canaan started wailing and Steve and I started to smell poop – oh boy, a chance to practice our outdoor diapering skills!  We found a large log where we could spread our portable changing pad out and went to work!  I am now proud to say that at 20 days old, Canaan had his first poop in the woods – should be the first of many 😉  After the diaper change, we realized that it was about time for Canaan to eat again, so we just leaned up against the log and nursed before moving on. 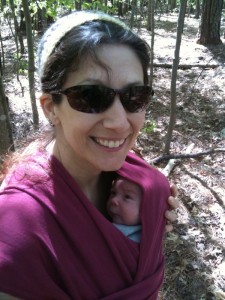 Me and my little Bean in the wrap

The rest of the hike was peaceful and uneventful – of course everyone that passed by us smiled and commented on how sweet the C-Squatch looked all bundled up in the wrap!  I told him to try not to let it go to his head, even though he is clearly the most beautiful baby on the planet…On our way back by the river, we took one more family photo, this time with Canaan in the wrap.  We finally got back to the car around 4:30 or so, where two of us hi-fived on our success, while the third person was out like a light!    All in all, we got in well over 5 miles of hiking, and were away from the house for a grand total of 6 successful hours – we left feeling rejuvenated, encouraged, and refreshed (and I felt like I’d been released from a cage…)  Our day could not have gone better, and I feel like it did wonders for my Creation Exploration Withdrawal symptoms!  I can’t wait til next weekend to see what adventures we can get into! 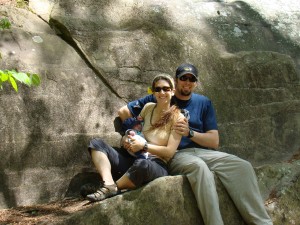 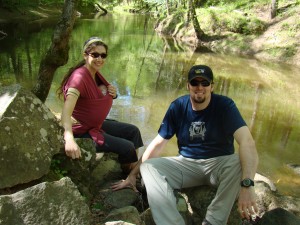 ....and another Family Portrait!

5 Responses to “Preparation for Crag – Hike #2”