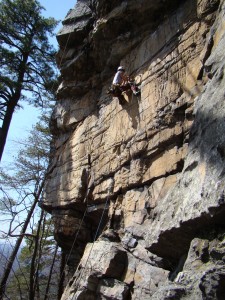 Crux time on Devil in the White House

The weather was stellar this weekend, so guess what we did – we went rock climbing! Surprise, surprise… Oddly enough, our first crag day since the move to Charlotte was NOT spent at local rock. Our plans were with a Raleigh partner as well as a Charlotte partner, so it made more sense to head to a halfway point, and since we just had one day free this weekend, Pilot Mountain got the winning bid!

Steve getting some hands-free hydration...

Even though the parking lot was pretty crowded and we saw lots of other climbing parties hiking around, the only route we had to wait for was our warm-up – Black Rain (5.9). It was really windy, especially up towards the top, and the rock was really cold. Just when I was starting to feel bad about not bringing Cragbaby’s bear suit, the sun came out and it felt like the temperature raised 15 degrees. We headed over to Devil in the White House (5.10d) and The Herculean Test (5.11-), where Cragbaby provided entertainment for everyone on the ground by showing off his camelbak skills. 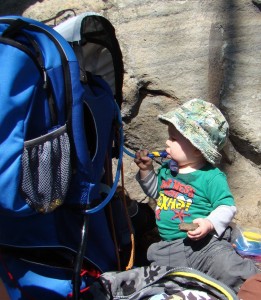 Speaking of Cragbaby, he had an absolute blast…he was wide open the entire day (except for one 45 minute nap around lunchtime). His highlight reel consisted of making beautiful music with Daddy’s helmet and a set of hexes, which accidentally led into a fun game of “Roll the Helmet Down the Hill and Laugh when Matt goes to get it.”  He finally crashed We’ve also noticed that Cragbaby has started taking an interest in what’s going on above him in addition to what’s going on around him. When I was at the shutts after my first go on When Shrimp Learn to Whistle (5.11), I looked down and there was my sweet C, waving and smiling.  🙂  This was my second day working on “Shrimp,” and I was really excited to send it on my second go – when I hung the draws I figured out my crux beta, then after everyone else had taken a toprope run, I pulled the rope and sent.  🙂 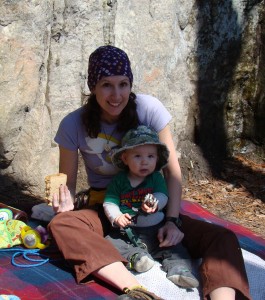 We ended our day toproping over on the seldom-climbed Big Arete on Mutiny on the Bounty (5.10-) and Man Overboard (5.11-).  Its actually two short routes stacked on top of each other.  There are bolts there, but they seem oddly placed without a logical clipping stance.   The crux also happens to be clipping the anchors with the previous bolt on a slab on the other side of the airy arete…needless to say we’ve always toproped it.  Besides, the toprope setup is exhilarating enough as it is – every time I crawl over the edge of the cliff and weight my anchor I have one of those “why the heck am I crawling over a cliff” kinda moments. This time there was some comic relief to it though, when the empty rope bag that was slung over my back somehow managed to open up due to all of the wind gusts, and the tarp started flapping around me like a cape.  (Where’s the camera when you need it?)  Speaking of cameras…we weren’t the best at taking pictures this trip.  I guess we were just having too much fun enjoying the day, which seems like a good enough excuse to me.  Cragbaby crashed as soon as we got in the car, slept straight through dinner, and on til morning, so it must have been a good day for all!