Slowly but surely I’ve been whittling away at my 2011 Hit List, and finally dragging my crash pad up to the Grandmother Boulders in Boone brings me one step closer to crossing off #7 from my list, which was about exploring new climbing areas.  These quality boulders are sitting around 5000 feet or so, making for a welcome summer respite for NC climbers drowning in humidity at lower elevations across the state.  There’s not guidebook of course, because thats the way NC bouldering rolls, so we were delighted that our friend Matt was up for showing us around.  The temps were in the 70’s, and it hadn’t rained in almost a week, making for refreshingly crisp conditions in the NC highlands! 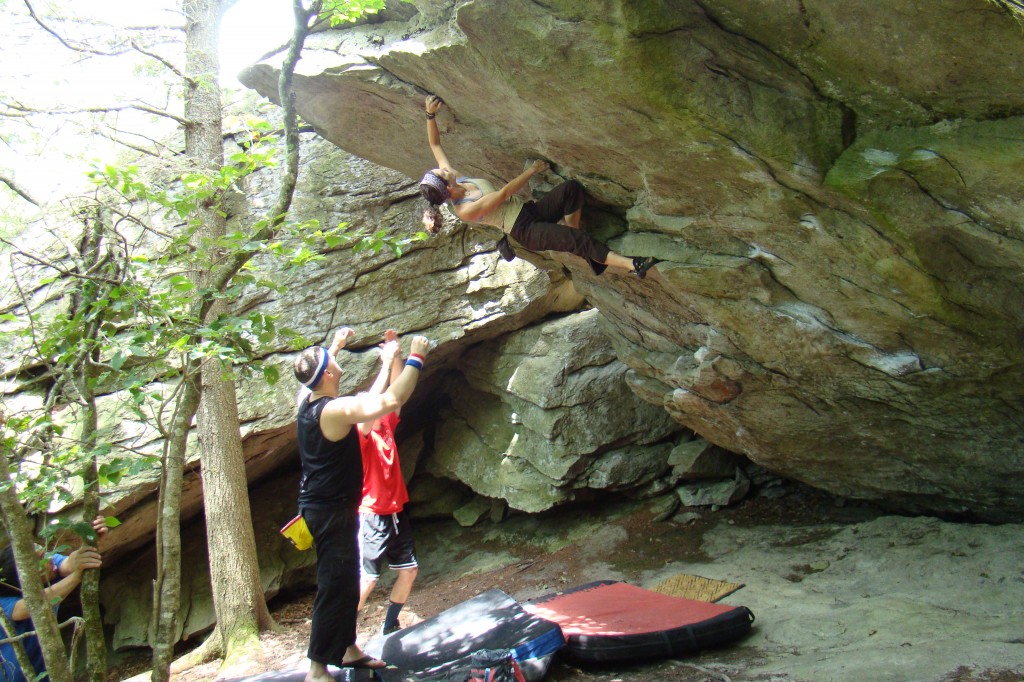 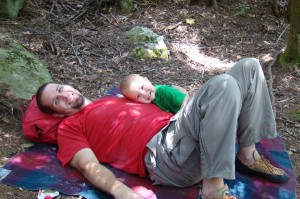 We warmed up on a couple of V1’s at the Bookshelf Boulder and a really nice V2 on the neighboring Hard Hat Boulder.  Next we made our way to the top of the hill to the Ebonics Boulder.  I was psyched to flash Hooked on Chronic (V3) – a tall, intimidating problem with a wildly exposed and committing topout.  On our way back down we made a quick stop at the Dentist Boulder to hop on Pulling Teeth (V4).  We all got shutdown on the low start, which we all agreed seemed pretty stout for V4.  The higher start goes at V2 however, and was a fun romp up a steep broken flake system to a left-traversing topout.  Next stop was the Mighty Mouse Area, where we all sent Big Easy (V2) – a V2 boulder problem ending with 20 feet of 5.6 climbing.  It took me several tries to send the aptly named Crack (V3), until I found a nice hand jam to help me exit the crack to the higher flakes. 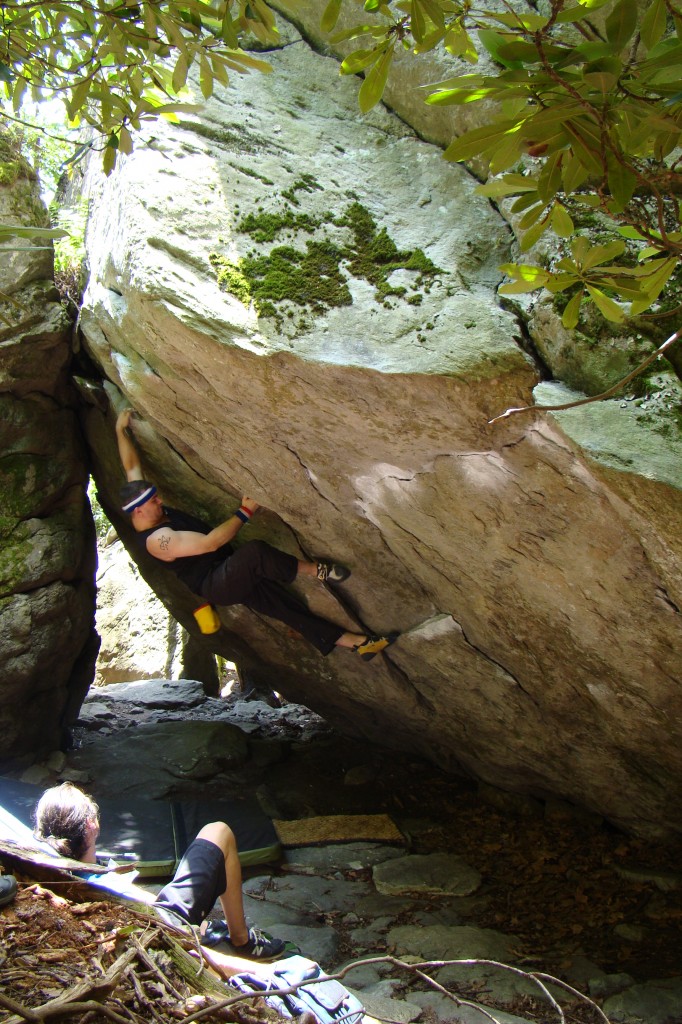 After a bit of convincing, we got Matt to take us to Decepticon (V3), a short, unassuming slab filled with balancey, undercling fun that your average steep-lovin’ boulderer wants no part of.  A friend of mine a while back had recommended it to Steve and I, and we were most definitely not disapointed!  It took me a few tries to get my feet right on the start, but after that I sent without much trouble – Steve did the V2 version that utilizes the arete, which also looked really fun.  After Decepticon, I hopped on what I think was Decepticon 2000 (V3?).  It started on the left side of the boulder and traversed along the sloping lip with smeary feet.  I actually thought it felt a little harder than Decepticon, but that may have been just because it was a much longer problem. 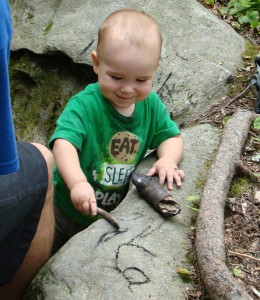 We ended our day soaking up the beautiful panoramic views at Valley of the Kings, which looks out over Grandmother Lake, Ship Rock, and Grandfather Mountain.  My favorite problem of the day was Haptos (V4), which I surprised myself by sending on my first go.  A classic and aesthetic line, it followed up a left-trending seam with a few broken sections that provided good fingerlocks.  We also did the Unknown (V3) on the arete left of Haptos before finishing up around the corner on Birds Nest (V2). 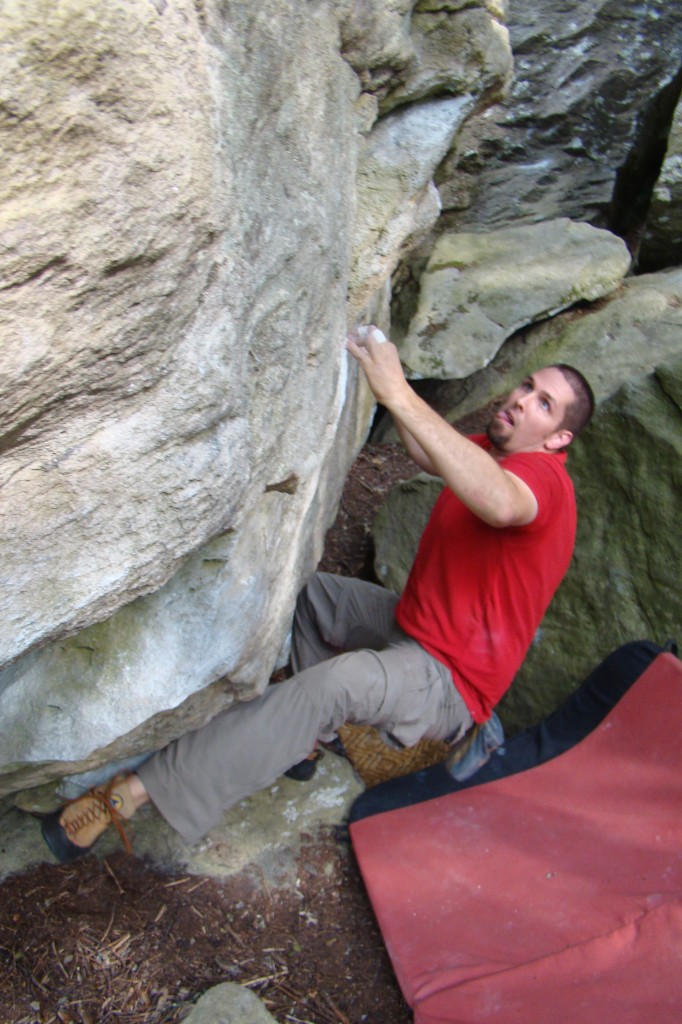 Even though the Grandmother Boulders were a little farther than what we normally drive for a day trip, the approaches were short and we didn’t start packing up til around 7 at night, which allowed us to still get in a full day’s worth of climbing (and then some!).  Since camera antics are always easier when ropes aren’t involved, we did end up with a few decent shots.  You can see the photo gallery by clicking here.  I would definitely be up for going there again, and another time it would be both fun and efficient to camp and get in another day somewhere else too, such as The Dump or Ship Rock. 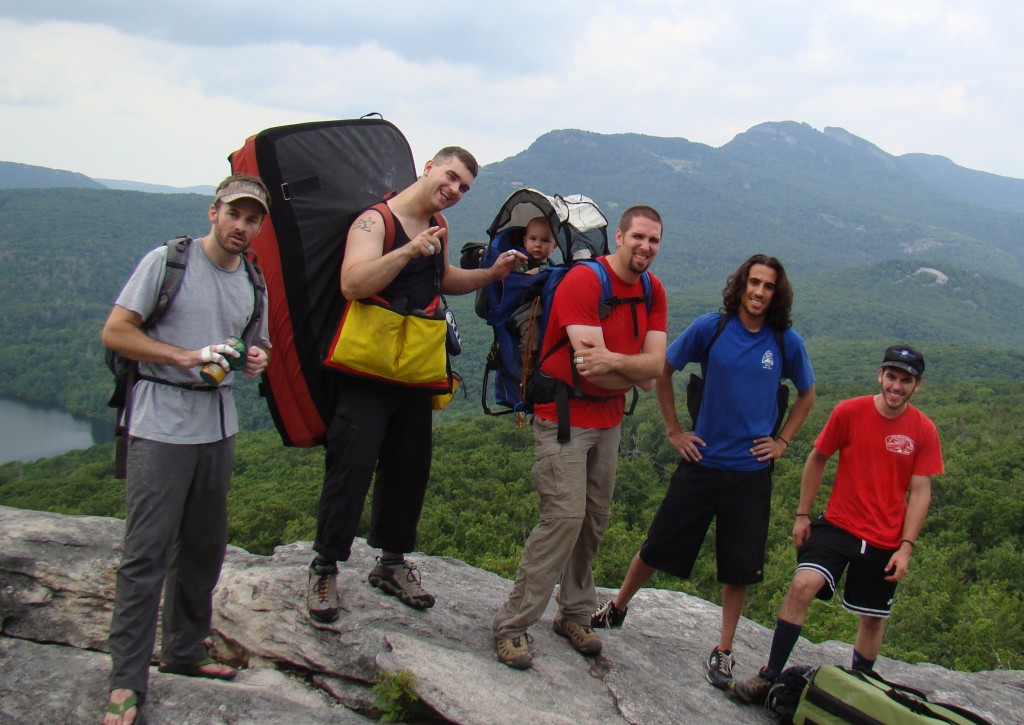 Enjoying the view at Valley of the Kings

8 Responses to “Over the River and Through the Woods…to Grandmother’s Boulders We Go!”