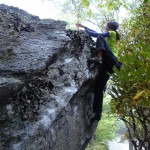 From wallowing in the sunny, upper 90’s of the Obed a mere 3 weeks ago to bundling up with foggy mornings in the 40’s at Grayson Highlands this past weekend, one would think we skipped over autumn altogether and moved straight into early winter.  Though the forecast across the Southeast was looking pretty grim, it appeared as though a lone bright spot was hanging over Grayson Highlands State Park with a mere 20% chance of morning drizzles.  However,we soon learned that a lack of actual rain doesn’t necessarily equal dry conditions.  It seemed as though the higher we drove in…Read the rest of this entry →