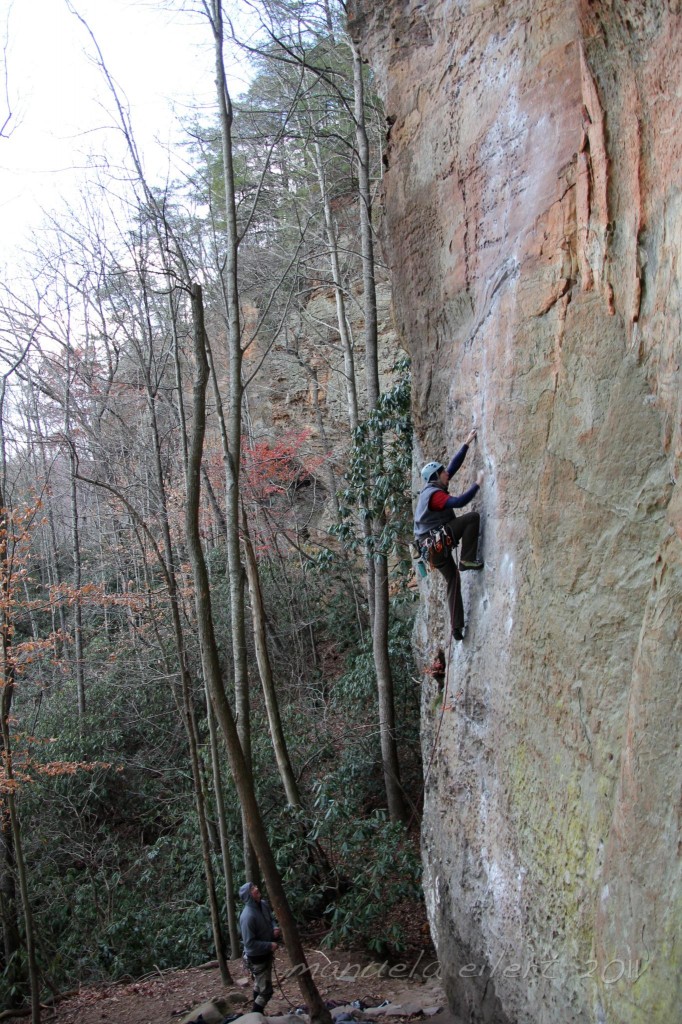 Steve on To Defy the Law of Tradition 5.10a

Last week our crew made a pilgrimage north across state lines, where we spent 4 days frolicking around on Kentucky sandstone.  This marked our family’s third trip to the Red, but only the first in which we didn’t get rained on every single day.  In fact, aside from a few passing showers in the car on the way up, we didn’t even see a drop!  Since we had a fairly large group, we decided to all go in together and splurge on a cabin – considering that the lows were in the upper 20’s, it was well worth the extra expense to have a cozy, warm place to come home to at the end of a long day of climbing (as well as a week’s supply of climbing videos to ensure we stayed continually psyched!)

For those of you that have never been, the Red is an amazing place, suitable for climbers of all abilities.  While there actually is a wide variety of climbs there, the Red is mostly known for its lines of steep, overhanging pockets, where the crux is often just being able to manage your pump all the way to the anchors.  Its a great place for building endurance, and the steepness as well as sprawled out nature of the cliffline ensure that you’ll find climbable rock regardless of temperature or conditions. 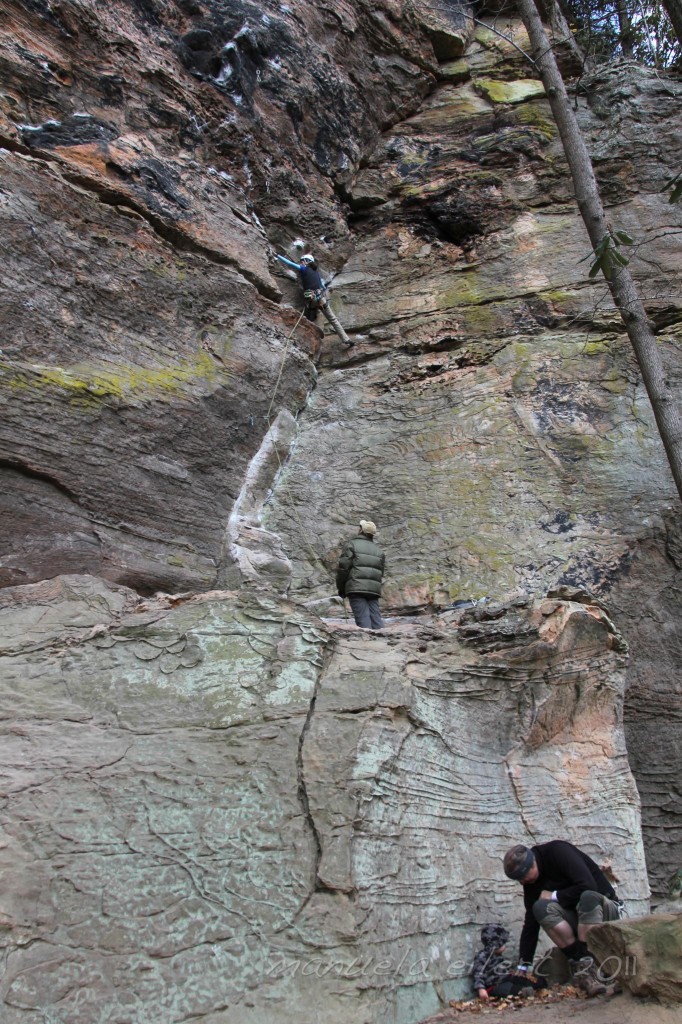 Approaching the crux on Wild, Yet Tasty 5.12a, while C plays happily below

With daytime highs hovering around 50 we were in search of south-facing, sun-drenched cliffs this trip.  We started things off on Day 1 at Left Flank.  It took a couple of hours for things to warm up, but we still got in a great day.  Cragbaby had fun too – he had loads of leaves to play with, as well as some creepy crawlies (including a big cave cricket that wound up inside Bennett’s shoe – it was C’s idea I swear…)

Brother Stair 5.9+
Maypop 5.11a – Be careful on the start or else your foot “may pop”.  Took a few tries to figure out the start, after that the balancy crimp-fest went down without much trouble.  There was only one hanger at the top, so I ended on the 5.8 to the left of it to set up the toprope for everyone else.
Hen-ry 5.11b – This blunt arete featured thin technical moves up a slab with funky high steps and holds so tiny they were virtually non-existent in some places.  Pretty sustained all the way to the anchors, with a decent run after the last bolt.  I fell at the crux on my first go, but since it was pretty low I decided to lower off and try again, and the next go I sent.
Wild, Yet Tasty 5.12a – The crux starts by making a really hard clip…which I never could find a stable enough position to do on lead, so I lowered off and toproped it in between Caleb and Bennett’s redpoint burns.
To Defy the Laws of Tradition 5.10a – A great way to close out the day.  This beautiful and sustained line was littered with perfect pockets and sidepulls all the way up. 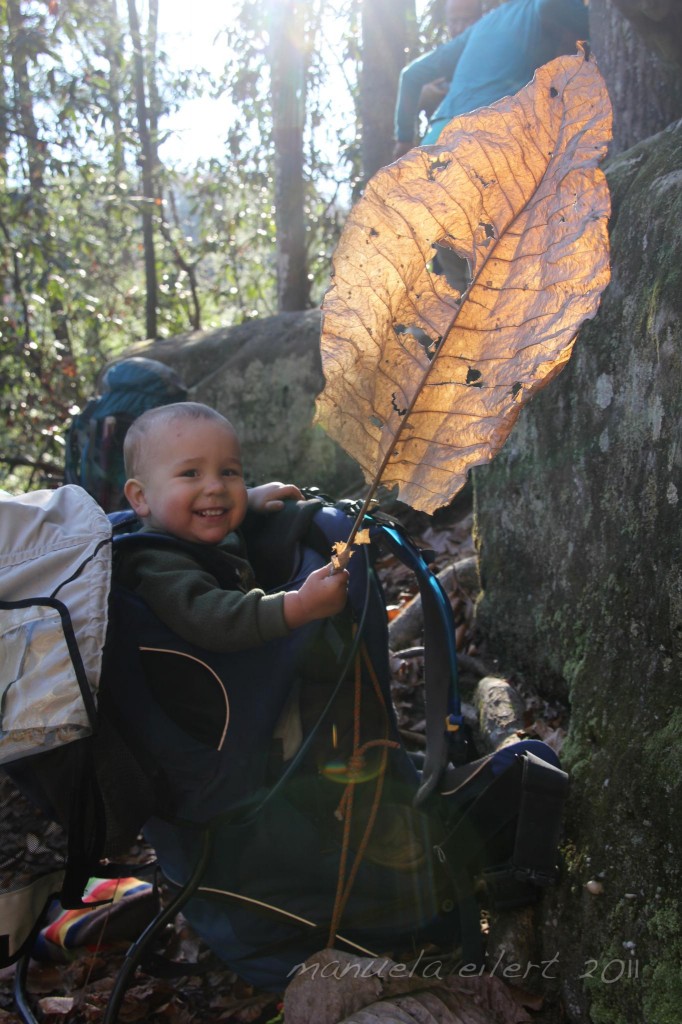 Anyone need a fan?

The next day was filled with sun, and we soaked it all up at Global Village.  The rock was nice and toasty warm, and we had all stripped down to t-shirts by the end of the day.  But the best part?  We had the crag to ourselves the ENTIRE DAY, which is virtually unheard of in an area as popular as the Red!

Vision 5.7 – This was the only time I broke out the trad rack all week.  I had intended to do more trad, but it just never seemed to work out.  This was a nice route, with a splitter hand crack with very few face holds for the first 25 feet, followed by exposed, blocky climbing through a flake system.
Kentucky Pinstripe 5.10a – Kind of a one-move wonder crux down low with enjoyable low angle climbing  the rest of the way – Great view up top!
Loosen Up 5.10b – Funky sidepull jugs on slightly overhanging rock with a pumpy crimper crux just before the anchors.
Out for Justice 5.11b – This was definitely one of the highlights of my week.  A bouldery, athletic start with long moves to pockets and a horizontal rail, and then 75 feet of precarious vertical face climbing on small crimpers and incut edges.  The crux was literally the last two moves of the climb as the rock steepened and the holds disappeared.  My fingers were screaming as I tried to figure out how to get the anchors clipped, and I was preparing myself for a heartbreaker finish, but somehow I was able to hang on and clip off of something really bad to save my onsight.
The Disappearer 5.11c – Not sure whether this was sandbagged or whether it was just me, but I thrashed and flailed myself at the crux repeatedly to no avail, until finally I had to be hauled through it…not my finest moment of the week for sure. 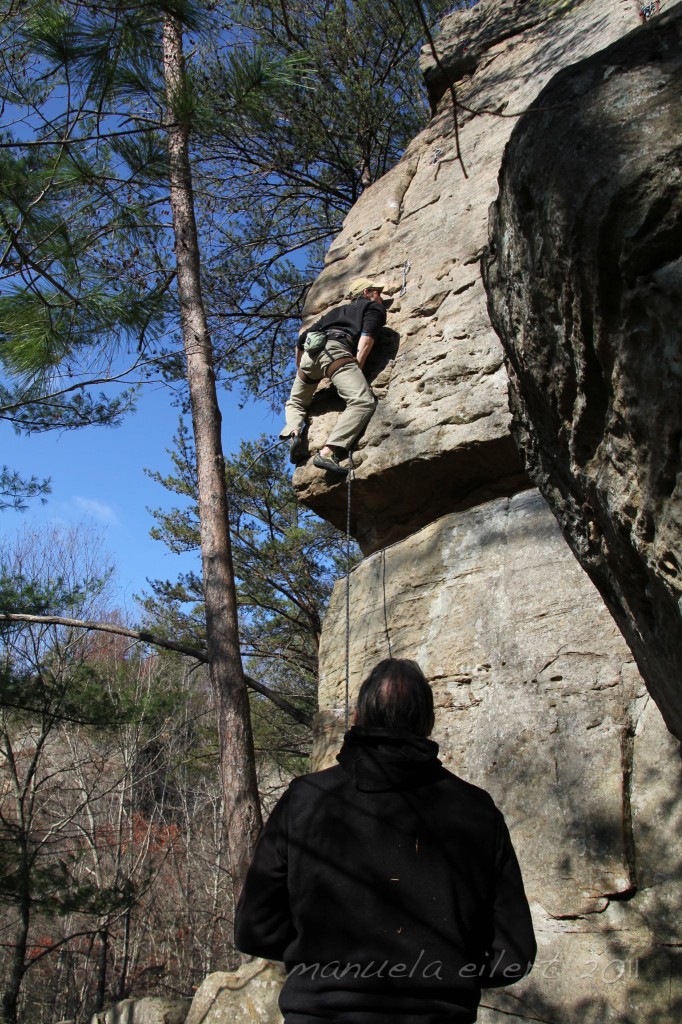 Bennett on Kentucky Pinstripe 5.10a

The third day proved to be the climax to our trip for virtually everyone in our group.  We had originally planned on Funk Rock City, but after seeing all the cars in the parking lot we opted for Eastern Sky Bridge instead.  What an amazing place – definitely my new favorite area at the Red.  Every route I did felt classic.
Drop the Anchor 5.8+ – Definitely a full-value 5.8, I was really proud of Manuela for stepping up her game and tackling it on the sharp end!
King Me 5.11b – Made famous by making the cover of Eric Horst’s “How to Climb 5.12” book (although ironically its far from 5.12…), this line is touted by many as the best of its grade in the region, and I would definitely have to agree! It was 100 feet of pure goodness – boulder problem start surmounting a bulge, then steep, exposed pockets and sidepulls led to the crux – a long move off a crimper and a funky undercling.  There’s pretty big (but clean) whipper potential if you blow it.  Next was another bulge on holds that would feel good except for the fact that you’re so pumped at this point…I was fortunately able to get a right hand jam just after the bulge, otherwise I never would have been able to hang on for the flash.  This kind of overhanging business isn’t usually my strong suit, so it felt really good to send on my first go!
Jack in the Pulpit 5.10d – Another fun romp up steep bucket holds, with one eye-opening move up high on some pinchy pockets.
Dave the Dude 5.11d – All I can say about this line is WOW.  This was by far the most difficult route I’ve redpointed to date, and it’s in the rankings for one of the best routes I’ve ever had the opportunity to tie into.  So I thought it would be only fitting to dedicate a separate post so this line wouldn’t have to share the spotlight with anything else… if you’re curious, come back tomorrow to read more (and see the video)! 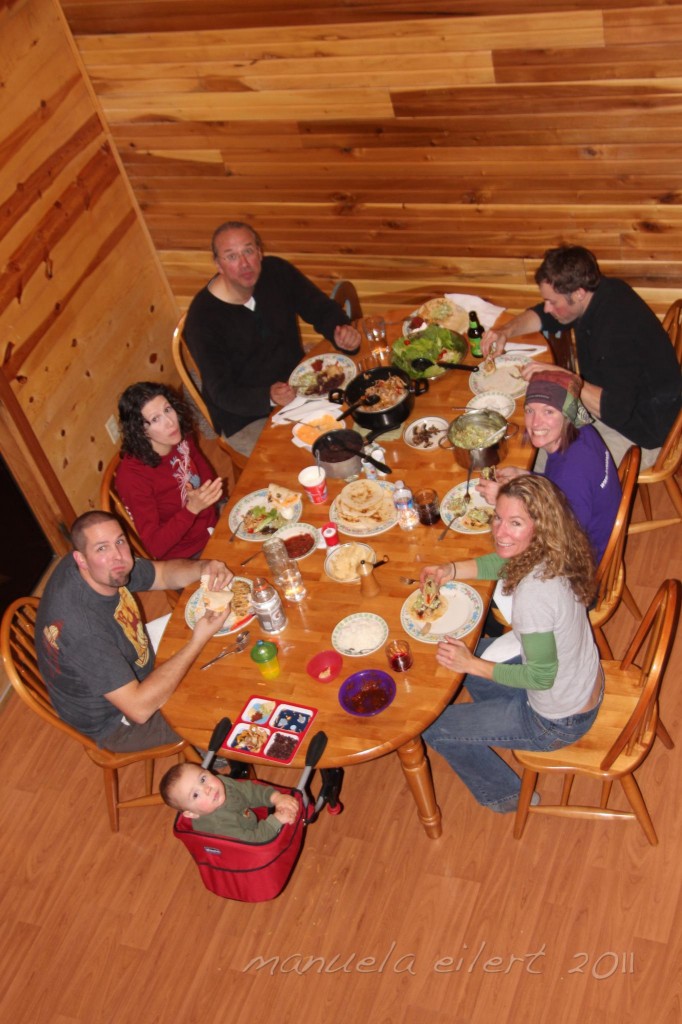 Post-climbing feast back at the cabin!

After exceeding all of my expectations on Dave the Dude, I easily could have gone home first thing in the morning on Sunday sans climbing.  The majority of our posse did just that, as they had farther to drive than us.  However a few of us decided to stay through the morning to check out a new area in Pendergrass Preserve (aka PMRP).  The parking and approach situations have changed a good bit since we’d last been there (and since the most recent guidebook was published), so unfortunately the majority of our morning was spent trying to get our bearings, but at least we managed to get one climb in at The Gallery.
A Brief History of Climb 5.10c – With a party of 4 (meaning only one rope since somebody has to be on Cragbaby duty…) we knew we’d only have time for one route, and as soon as we walked around the corner and saw this line, we knew this had to be it.  After a somewhat technical start and some blocky ledge systems, the route followed an amazingly steep and exposed arete along giant incut plates, some of which were too thin to believe!  This is the kinda route that makes you feel like a kid on the monkey bars – its just downright fun!  It was the perfect way to end our trip, and big props to Steve for hanging on for the flash on this one, because steep isn’t really the name of his game either. 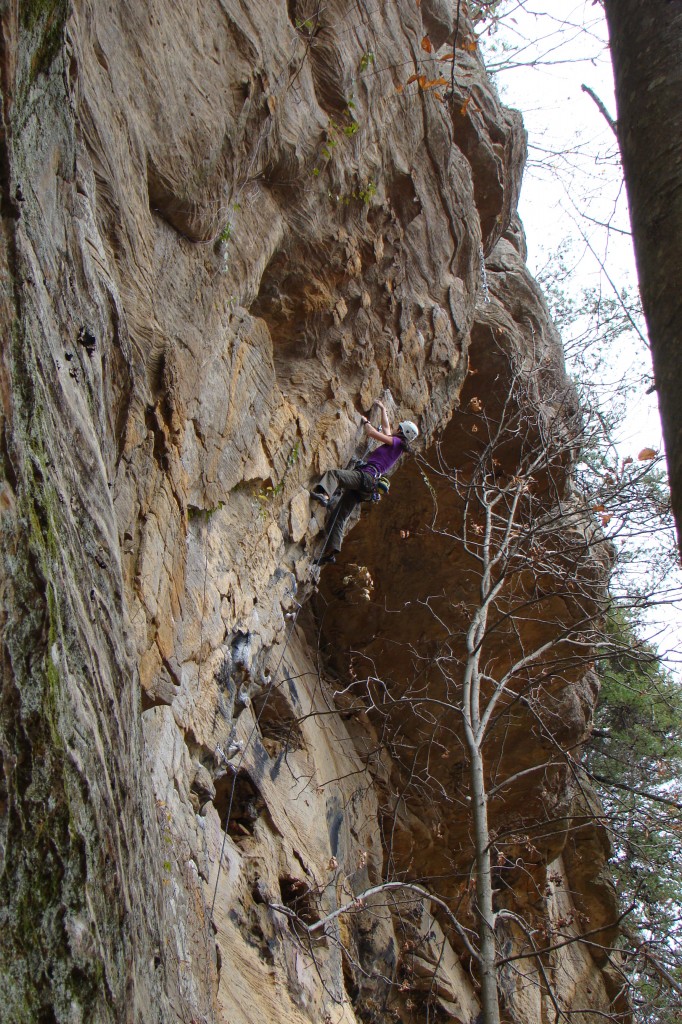 A Brief History of Climb 5.10c

We ended our weekend with a passed-out Cragbaby in the backseat and several hours of hubby and I talking a mile a minute, recapping all the fun highlights from a fabulous fall weekend at the Red.  It made the 7 hours in our stinky car seem not-so-bad (although it unfortunately didn’t do the same for the pile of laundry that’s still sitting in our hallway…).  Our photos are a little sporadic, but plenty of great memories were captured as best as a camera can do – click here for more.