Steve and the blanket of shade that followed us around all day.

After turning in a giant lump of manuscript to Earthbound Publishing at the end of the summer last year, my work on the guidebook has been pretty sporadic the past few months.  Mostly I’ve just tweaking a few revisions here and there and wrapping up some interviews.  However there has still been one large item on my punch list that had remained unchecked for a long time, mostly due to logistics…The North Face.  Not the jacket company (although one of those would have come in handy!), but the North Face of Stone Mountain.  For most climbers, it’s always been something to gawk at on the way the ever-popular South Face.  The rock is steeper, colder, and more polished than the South Face, and protection is just as sparse!  Though not far from the road, getting to the base of many of the routes is quite a bushwhack.  There are no trails and very little route documentation because no one climbs there…but no one climbs there because there are no trails and very little route documentation.  But many of the lines there are just as classic as their more popular neighbors on the sunny South side, and are definitely worth a look for Stone Mountain climbers interested in new, adventurous terrain. 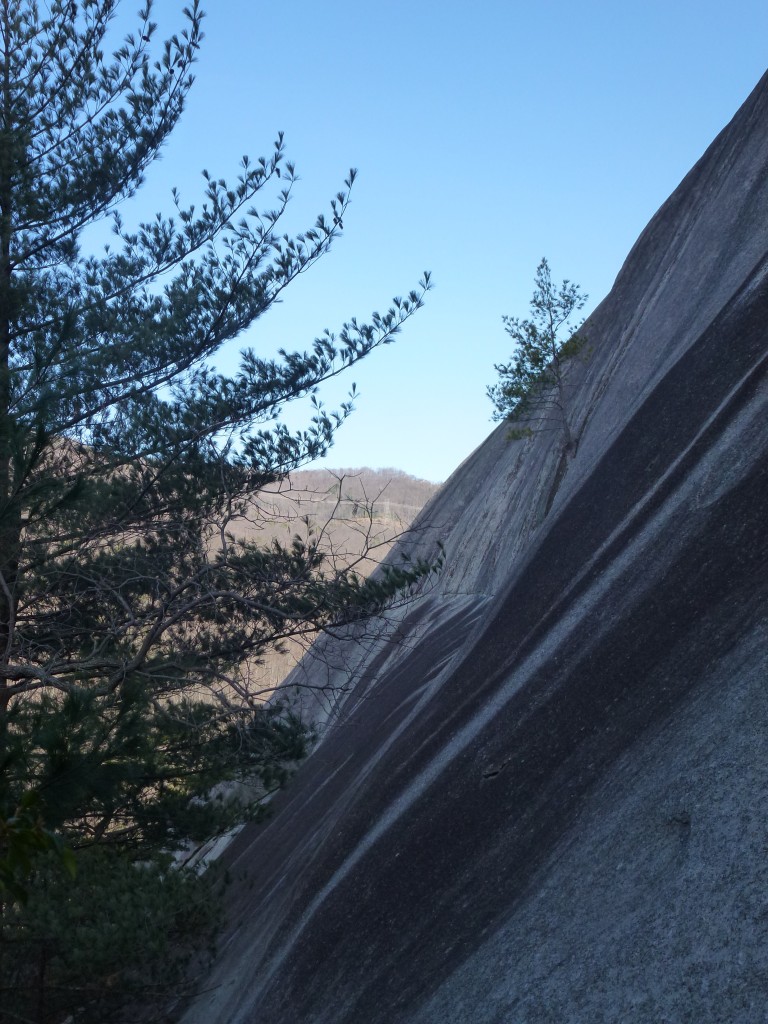 My first forays onto the North Face began last July, when hubby-Steve and I were able to systematically check off all the routes on the left side of the wall.  We were making good progress, until a super soaker thunderstorm abruptly put an end to our day.  Fortunately we saw it coming and were able to safely retreat to the woods before the water works really got going.  Unfortunately, however, we were only halfway done.  Fast forward to this past Saturday, when Steve and I headed back up their for round 2 of North Face adventuring.

Though early morning temps were barely scraping 30, the sun plus the hike made us toasty warm as we made our way up to the summit.  Our plan was to lower in from the Stainless Steel rappel, and then methodically work our way over until reaching the newer routes put up by Mike Fischesser in 2005.  The sun was in full force on top of the dome, and I began to question my decision to bring my bulky down jacket…then we rapped over the bulge and into the dark, shady recesses of the North Face. 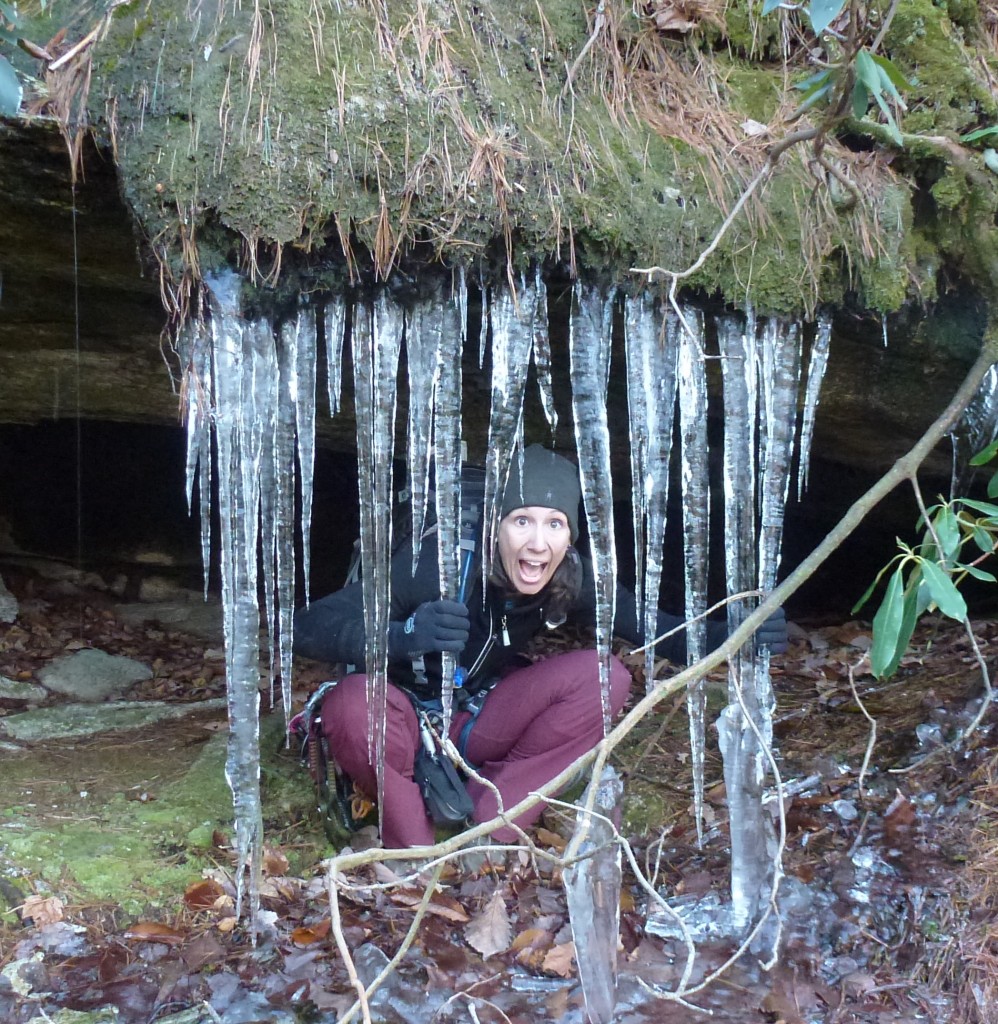 While I envisioned all the climbers that were probably draped across the South Face in short sleeves, we were draped in our puffy coats, wearing gloves and knee-high socks underneath our climbing shoes – it was frigid!  But despite the cold, we had a very profitable day scoping out routes, taking pictures, and getting a feel for the lay of the land on the right side of the wall.  Oh yeah, and the company wasn’t too bad either, as it’s not that often that Steve and I get a chance to adventure together sans Cragbaby!

Our verdict?  If you’re slab-happy and you know it, come to the North Face!  (But not now…enjoy the South Face while you can, then migrate north when it gets too hot!)  And speaking of the South Face, that brings me to the second part of this post – the sneak peek!  While MY work on the project is wrapping up, the publisher and topography guy have just been getting started!  Over the past few weeks they’ve been swimming in a sea of text, images, and layouts, trying to come up with a good template to work with.  We’ve finally settled on something that will work for all of the areas to be included, and I for one am delighted with how it looks so far.  Here’s a couple of pictures of how it’s coming together for the Stone Mountain section.  It is indeed just a draft, but it can at least provide an accurate picture of how the guide will look and feel.

For those of you that are local, I’ll have even more samples available to read tomorrow at the Charlotte showing of the Reel Rock Tour.  Look for me in the Trango booth and stop by to say hello!  Hopefully you guys are as excited as I am to get this book on the shelves.  Right now we are still operating on having it ready for the fall season, so fingers crossed!

9 Responses to “Guidebook Update – With a Sneak Preview!!!”