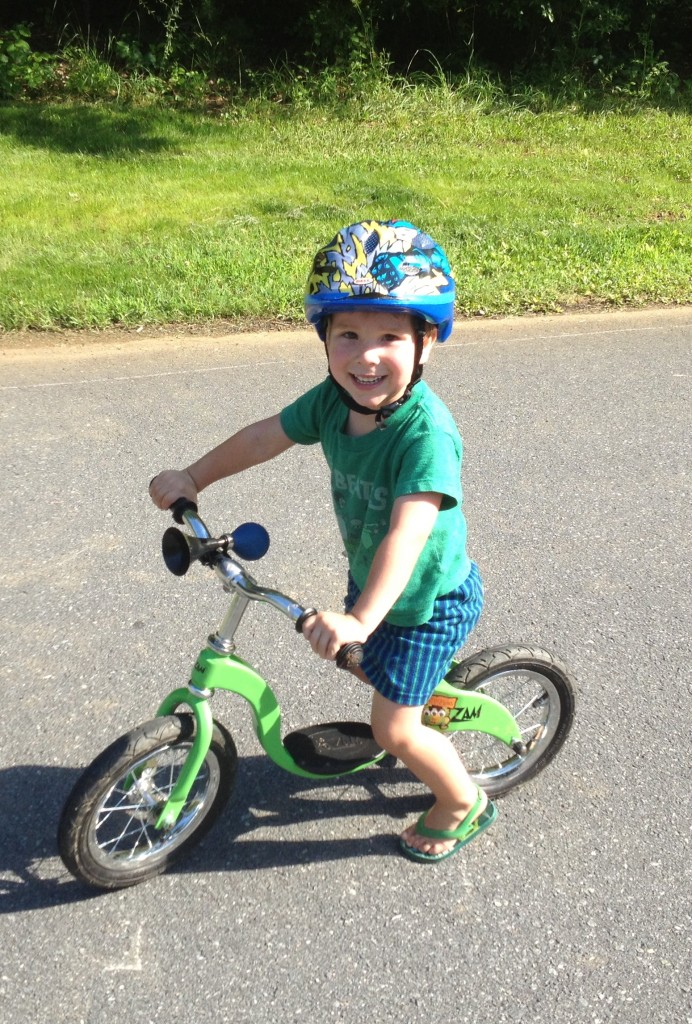 While most of our family’s recreational pursuits tend to revolve around rock climbing, it’s probably also fair to say we’re pretty avid bikers, especially in warm weather.  With that in mind, a balance bike was one of the first things on C’s birthday list when he turned 2.  For those of you that are unfamiliar with balance bikes, the concept is quite simple – just a bike frame and two wheels – no gears, brakes, pedals, or training wheels.  The rider propels the bike forward with his/her feet – at first just standing over the bike and walking, and gradually moving to a gliding type motion with the child’s bottom fully weighting the seat. Eventually the child is able to balance on two wheels and steer, using their feet only to push off for speed.  In theory, this makes the transition to a regular bike with pedals much easier than having to “unlearn” relying on a set of training wheels for balance.  For some action videos of C demonstrating proper balance bike technique, click here or here.

While C initially tried his balance bike a few times, for whatever reason the concept never really seemed to “click,” and he grew disinterested pretty fast.  Though I would bring it up every now and then, I didn’t push, which means that for the past 15 months C’s bike has mostly just been gathering dust in the garage.  Meanwhile, C would happily ride just about anywhere in the bike trailer – I think he just categorized biking as one of those things that grown-ups do…But that was before C met “K.”

A new friend for C, K is an almost 4 year old who is passionate about exploring everything on two wheels (the big boy kind, complete with pedals and no training wheels!)  On their first playdate, C watched with envy as K biked circles around him (literally!)  But the next time they got together, C was ready, and specifically requested that we bring his balance bike along.  At first he was a little frustrated, as he was still in the “walking while straddling the bike” stage, so he didn’t stand a chance at keeping up with K.  But after a few peer to peer lessons from K along with some good old-fashioned practice, I was amazed at the progress he made in just an hour or so.  By the end of the playdate he was comfortably zipping along on his bike, pushing off and gliding along as if he’d been doing it all his life!

Since then, C has been biking like a madman!  In a matter of days we’ve done countless laps around the neighborhood, ripping along the road and yard, zooming through puddles and over bridges.  He even biked THREE WHOLE MILES along our local greenway path last Friday!

Many times our society looks at the idea of “peer pressure” with a negative connotation.  And many times that’s well-warranted.  But just as often it can be a very positive developmental experience, especially when it comes to younger kids learning from older kids.  C had been exposed to biking from infancy – he knew what a bike was for and all the things a bike could do.  But just watching mom and dad do it never sparked a passion.  Instead it was the positive influence from a peer that lit a fire under him. 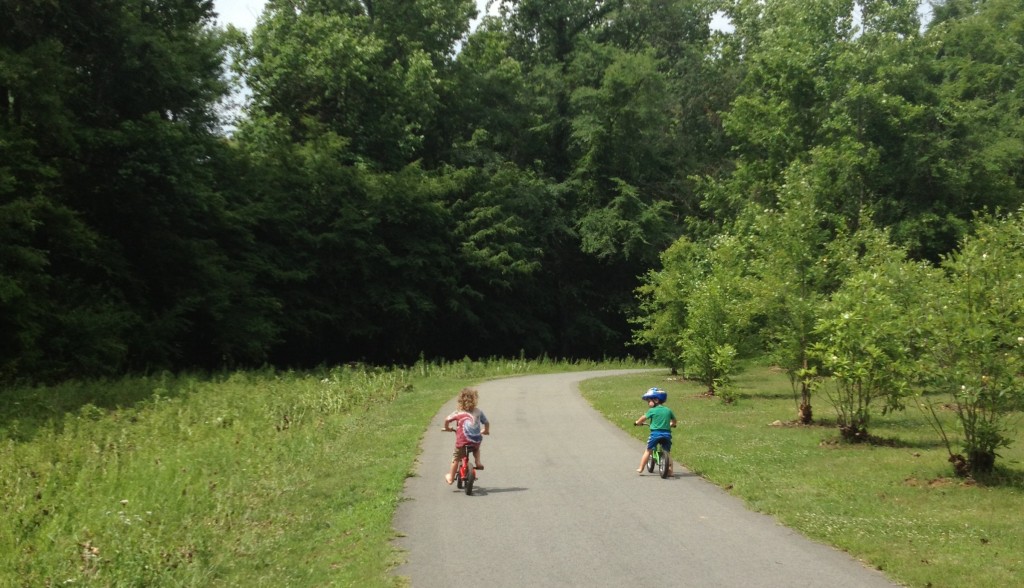 I am thrilled about the progress C has made on his bike.  Firstly, it provides him with a whole new medium for exploring his world.  By the end of our greenway ride, we’d seen bunnies, ducks, millipedes, and even two crayfish!  Secondly, his recent successes have brought about a new confidence in his physical abilities.  I can tell that he’s proud of himself for learning a new skill (“I’m doing it Mommy, look!”).  And lastly, I’m excited at what C’s love for biking might mean for our family in the long-term – whether it’s bike-packing together out West enjoying spectacular mountain vistas, or just ripping some local singletrack together at home.  Biking will hopefully be just one of many ways our family will find common ground to stay connected from C’s childhood to youth and beyond!

What lessons have your children learned from (or taught) other children?  And how has biking or some other recreational pursuit played a bonding role for your entire family?