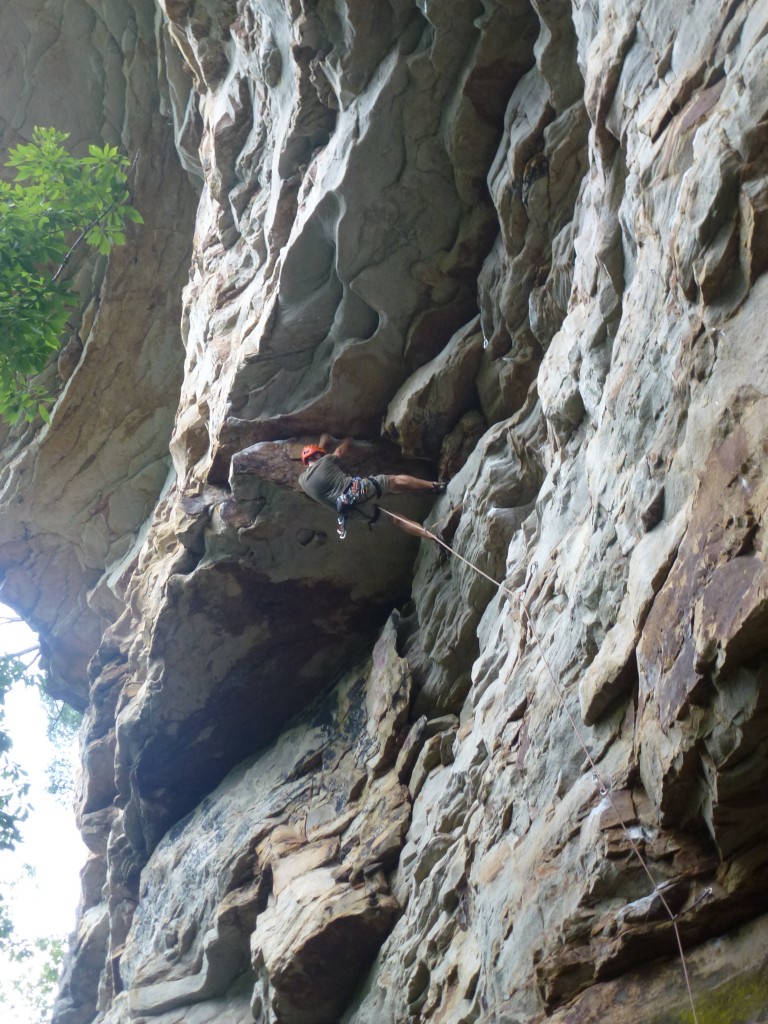 Steve cranking out the roof of The Rail (5.11c)

If I had a dollar for every time one of our crew said the word “manky” this weekend, I’d have plenty of money for a nice date-night dinner with the hubs.  For those of you that aren’t familiar with this highly technical term, “manky” is generally an accurate descriptor of summer climbing conditions in the Southeast.  The rock feels greasy, palms are sweaty, and chalked up holds feel like they are coated in a layer of slimy toothpaste.  Not to mention that smothering wet blanket of humidity Mother Nature tosses over your head while hiking in and out of the crag.  Needless to say, our weather at the Obed River in Tennessee this past weekend was a far cry from the “sending conditions” we can expect to see in just a few short weeks.  We quickly realized that no hard projecting was going to happen, and lowered our expectations to mileage on the classics over constant laughs with friends.

This trip marked the first time since my last pregnancy that I’ve gone an entire climbing weekend without being on the sharp end.  At 13.5 weeks, my outdoor leading days are now officially on hiatus until after Baby #2 comes onto the scene next March.  It’s a very weird feeling, and if I’m being honest, I don’t like it.  I don’t enjoy toproping nearly as much as I enjoy lead climbing, because let’s face it, toproping a climb completely neuters a line.  That’s not to say there’s not a place for it, for both beginners and experienced climbers alike – I toprope in the gym because I’m short on time and can get in more laps that way.  I toprope routes that are above my head to safely explore my physical limits.  I also toprope to safely rehearse the moves on a route with sketchy fall potential before trying to lead it.  But the only routes that “count” for me are the ones that I’ve sent clean on lead.  Climbing is just as much (and sometimes more!) about winning mental battles as it is physical ones.  Taking out such a big part of the equation makes a successful climb far less satisfying. 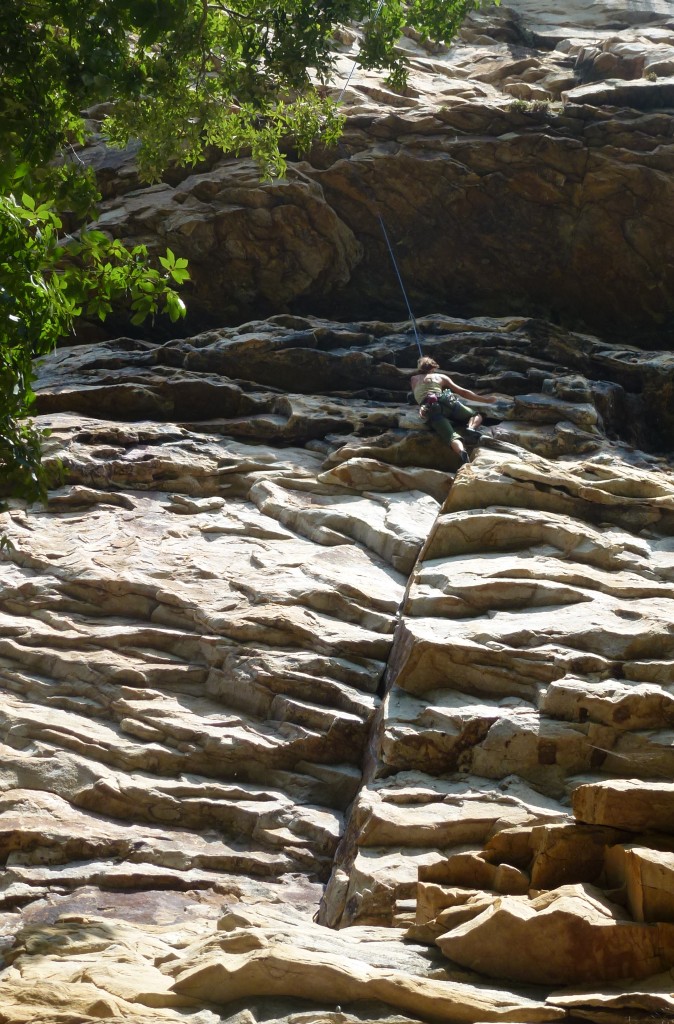 Exiting the dihedral of Rumors of War (5.12b)

The other reason I dislike toproping is entirely ego-related…I don’t like being dependent on other people to put up routes for me to climb.  I don’t like watching my friends pull the rope one by one when it’s their turn, while I jump in at the back of the line for clean-up duty.  It makes me feel like a newbie, and I’m pretty sure every other party we encounter assumes that I’m just the significant other tagging along with my husband’s climbing friends.  All that being said however, toproping is by far the safest option for sweet Baby #2 right now, so a toproper I will be for the next few months!  And I promise that 99% of the time I’ll have a smile on my face doing it, I just needed some cyber space to air out my ego a bit 😉

Our first day was spent baking in the sun at South Clear Creek.  After a warm-up on the ultra-classic Spawn (5.10c), Steve and I both flailed through the sweaty, slippery dihedral of Prophet (5.11b).  We were disappointed to find that everything in the Stephen King Library was seeping, but Brother in Arms (5.10b) was a fun and casual alternative.  The opening moves were scrambly and easy, so we decided to let the crag-kiddos take a crack at it while the grown-ups took a siesta.  In case you’re wondering from the pictures, we’d accidentally left C’s helmet in the car, but he never got any higher than 10 feet or so anyway, so thankfully it wasn’t a big deal.  I squeezed in two more routes that afternoon before hiking out – Paleface (5.11a) and Alchemy (5.11a).  The former had been a challenging send a couple of years ago, so I was pleased that I felt very secure and solid on it this time around.  The latter did not go down as easily, as the upper section was just a little too thuggy for my low-endurance state to be able to power through without hanging.

C powering through the start of Brothers in Arms…sans helmet.

Day 2 dawned rainy and wet, so we opted for North Clear, which stays dry as a bone even in a downpour.  We warmed up on the short Double Trouble (5.10a) before moving on to The Rail (aka Drugbusters) (5.11c).  Next came Sensitive Guy (5.11b), which everyone unanimously agreed was the hardest .11b we’d ever been on.  Had the guidebook said .12a I wouldn’t have batted an eye, and no one would have called it soft.  Only one person in our group climbed it clean, and even that was with an uncharacteristically excessive amount of grunting and shouting.

My last route of the day was epic – Rumors of War (5.12a).  One of the best of the grade I’ve been on in a long time – it’s got pretty much everything you could want out of a single-pitch sport climb – bouldery opening sequence, gorgeous steep, slanting dihedral, and a horizontal roof finish (there’s also an extension onto the upper face above the roof that goes at 5.12c).  It took two tries to do the boulder problem start, but I was shocked that I blasted through the dihedral clean on my first go – it was probably the first time since I found out I was pregnant that I really put my “try hard pants” on.  Every other move was a committing stand-up off high, smearing feet, and every time I thought for sure I was going to come up short, but managed to hang on.  I started to think I could maybe get the route clean…My forearms were red-lining as I approached the roof, but I only had about 10 more feet to go, and besides, every other Obed roof I’ve ever climbed is littered with buckets and handlebar jugs.  But a classic like this wasn’t going to succumb that easily – no mercy, even for a pregnant woman…A series of small pockets guarded the finish, and stopped me dead in my tracks a mere arms length away from all those giant hero holds!  On toprope it was really difficult to get the last bolt before the roof unclipped, as a fall would have swung me way out into space and made it hard to get back on.  I managed to get established in a sequence that seemed like it work, but could never do it AND get the quickdraw out, so I ended up aiding my way through on the draw to reach the jugs at the roof.  This route is definitely one for my post-preggo tick list!

On the last day, we were all dragging, so we kept things short and sweet at Little Clear Creek.  Over the Top (5.10a), Finders Keepers (5.10b), Losers Weepers (5.11a), and Alzheimer’s Onsight (5.11a) were the only routes on the agenda.  Oh, and we also hung a rope up on 32 Feet Per Second Squared (5.5), for the kids.  This time C made it almost to the top (though in full disclosure he had a good bit of “belay assistance”!)  He remembered all of his commands, showed no fear, and lowered off with perfect feet-against-the-wall form!  The only tears came out of frustration when he had to stop climbing because he couldn’t unclip the rope out of the last quickdraw! 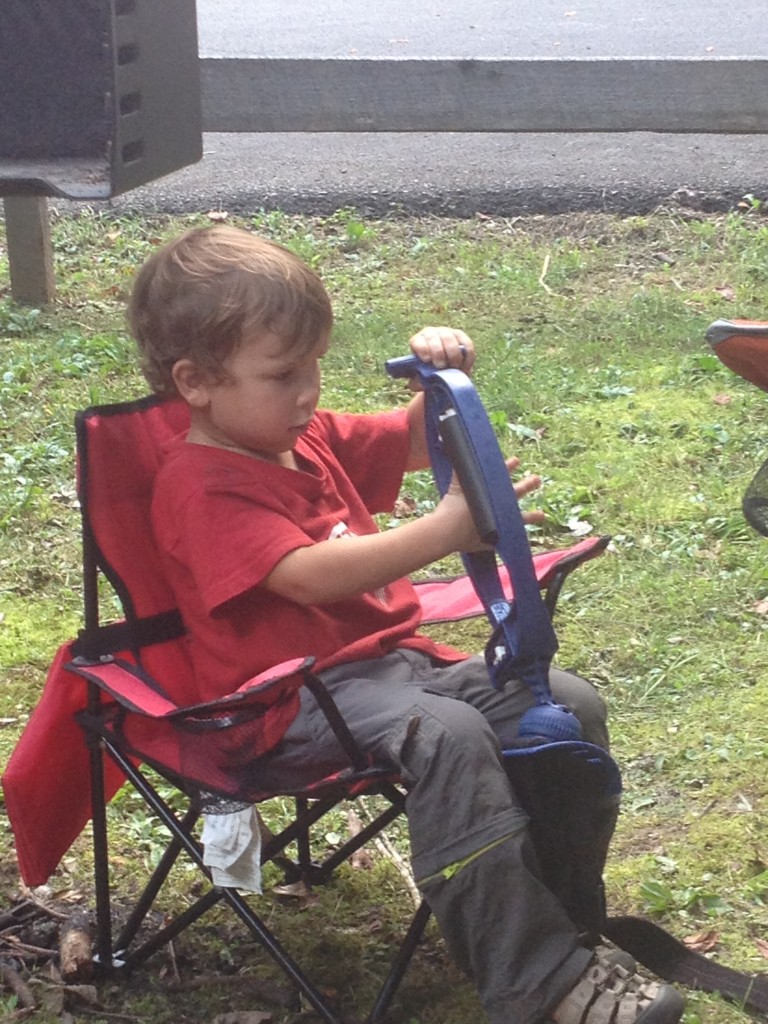 A morning-after Armaid session is the perfect way to limber up for the day!

Despite the rain and heat, we ended up with a great weekend.  I felt strong as ever on vertical to slightly overhanging rock, but I’m noticing that my core is starting to betray me on roofs, making it hard to stay in tight to the wall.  On a flat or downhill hike I have plenty of energy, but add the slightest incline and I am out of breath alarmingly fast (which meant the steep, strenuous trudges back to the parking lot were done at a snail’s pace.)  I’ve also noticed that multiple climbing days in a row seem to take a heavier toll, so it was good that the morning after we got back coincided with C’s first day of preschool, giving me a lazy morning to unpack and get back into the routine.

Who else got a taste of adventure over the long weekend?