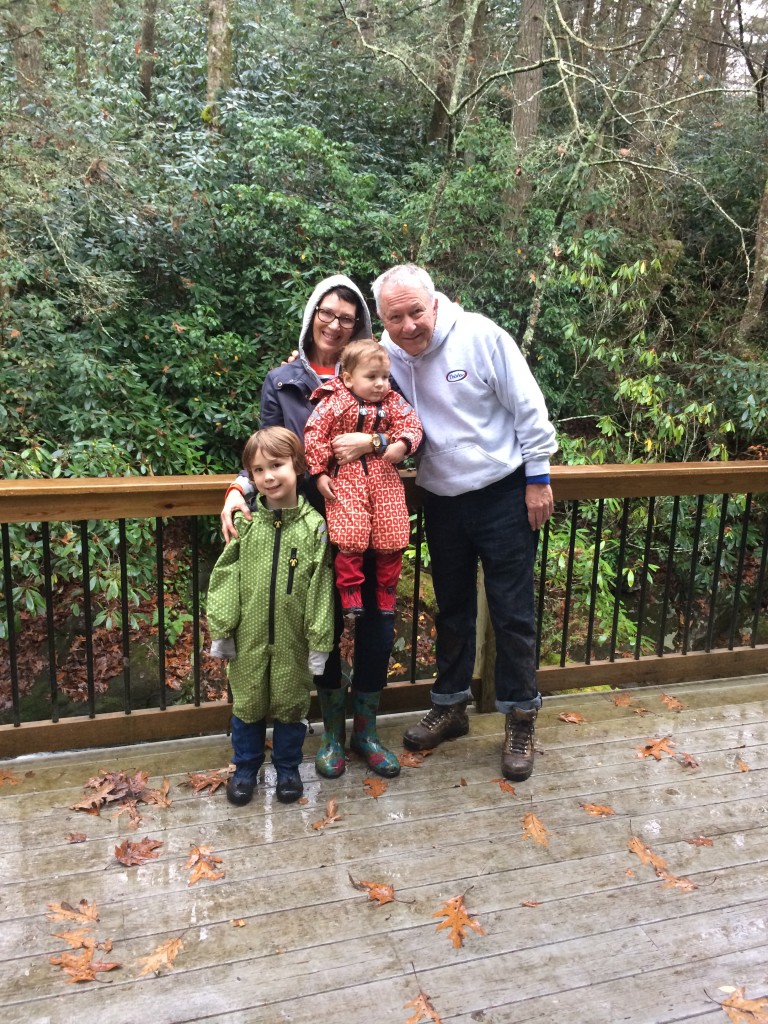 Let’s hear it for grandparents!

This past Sunday the Crag-Daddy and I got a chance to do something we hadn’t been able to do since some time in 2012 – climb outside together without kids!!!  We’d been looking forward to out crag-date for months (years?), and we actually ended up having to wait even longer than anticipated.  The original plan was for us to climb together sans kiddos at the Hound Ears Bouldering Competition on October 3rd…but then that, as well as the make-up day on October 4th got rained out.  No worries, it was rescheduled for a month later, on November 7th…but as the new date approached it became obvious that day was going to be a wash out as well.

With Sunday looking in the clear, Steve and I were hopeful that we would finally get to boulder together, but apparently the powers that be had other plans, because on Thursday morning the event was postponed until an undetermined time next spring.  Womp womp.  Cue sad trombone music.

Luckily we had a plan B.  After all, we still had a cabin in the high country (courtesy of some friends of Steve’s parents), and we still had some enthusiastic babysitters (courtesy of Steve’s parents.)  So after school/work on Friday, we headed up to the mountains of Western NC.  Saturday was a dreary, drizzly day, but was far from lazy.  The morning was spent tromping through the woods and hopping back and forth across the creeks around the cabin.  We made several interesting discoveries – a giant lichen on the side of the tree, a ring-necked snake, and believe it or not, stumbled across a small cliff with some established lines on it less than 200 feet below our cabin!  (We did some digging and learned some of the history of the area, which is basically a backyard crag. We didn’t try to climb there, and after finding out it’s on private property we most certainly won’t, but it was exciting making the discovery all the same!) 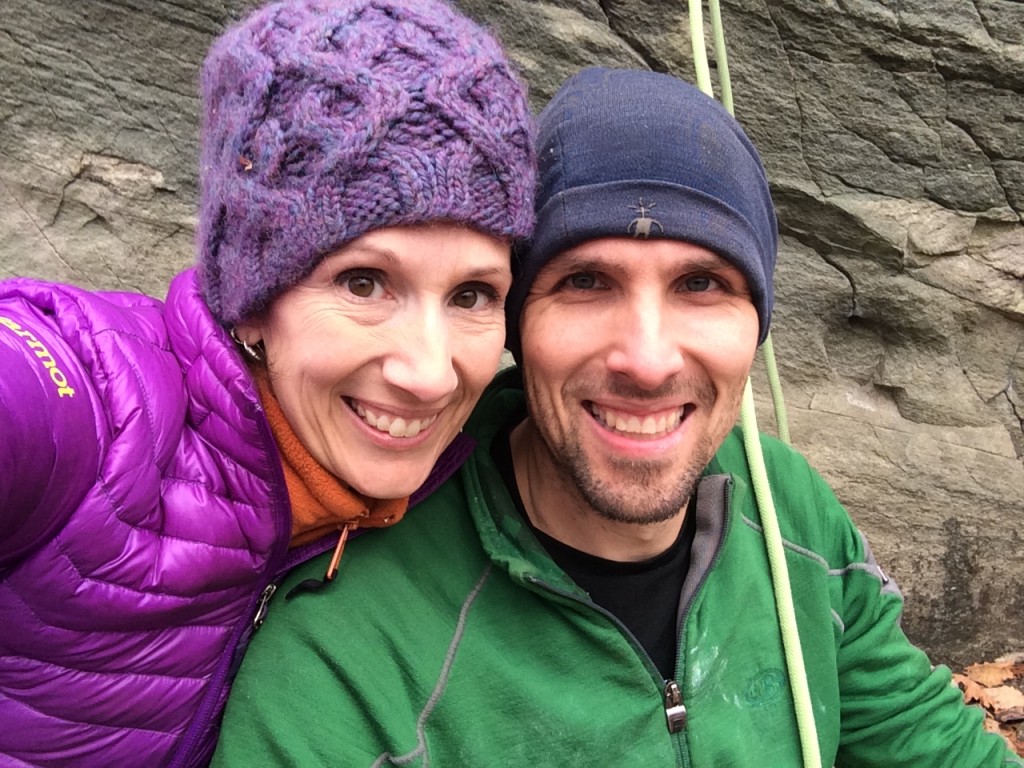 Just me, my man, and some rocks!

Sunday dawned cold, but dry, and after a leisurely breakfast, Steve and I said goodbye to our sweet kiddos and headed up highway 221.  We didn’t have any agenda other than to find dry rock and have fun, and both of those goals were pretty easy to meet.  And as a bonus, we managed a feat we’d never done before – 3 different crags in one day!

Our first stop was The Dump, which we frequent a good bit with the family, thanks to the high quality roadside craggin’ it offers.  Unfortunately, but not surprisingly, the routes that were next on our tick list (Not Too Keen 12c/d for me and Black Jackets 12b for Steve) were running with water.  But there was still plenty of dry climbing to be had, and after only an hour, Steve and I had each done 3 climbs apiece – Voodoo Chile 11a, The Vermin 10b, and Slimen Hymen 10b.  A pace like that is an unheard of luxury with kids!

Another luxury was hiking around with packs that were only half full, and the ability to toss everything in and move to the next spot in less than 2 minutes.  (It almost made me wish there were other people there so we could see what it feels like to NOT be the last one ready to hike out.) 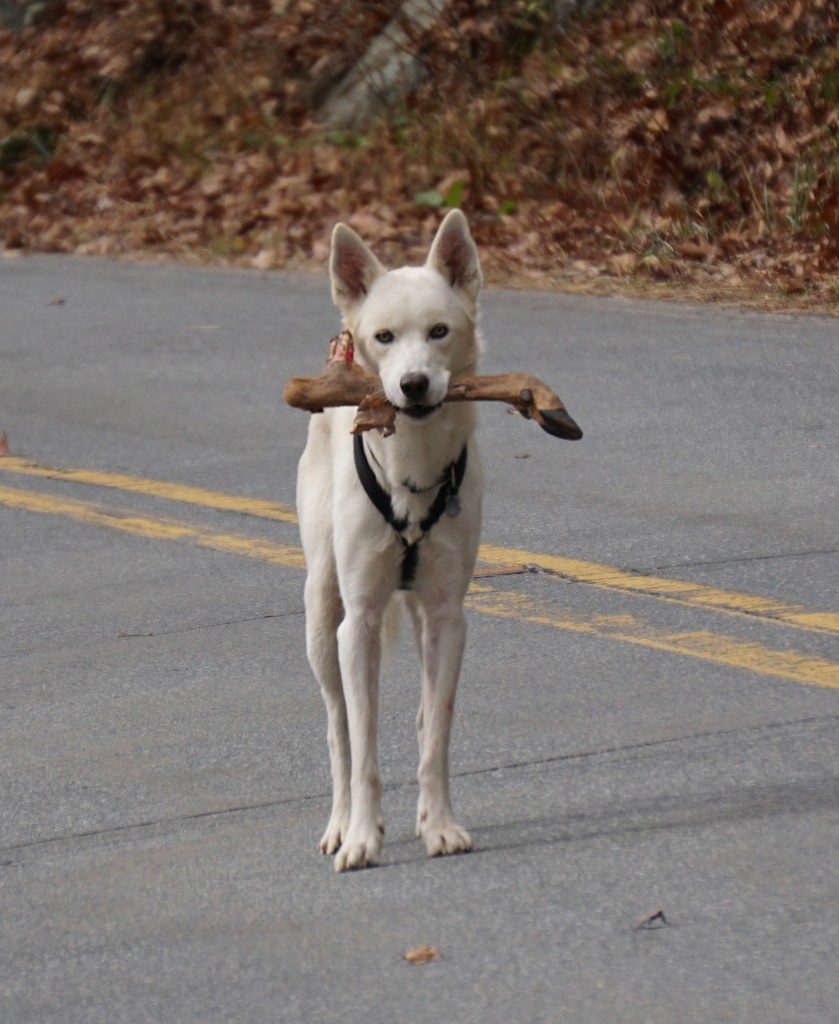 This dog came prancing towards us as we were packing up at The Dump. “Look he’s bringing us a stick,” I say to Steve, who then says, “That’s not a stick…”

Stop #2 was just up the highway at Sunken Treasure, another small roadside crag, this one made up primarily of mixed routes.  We’d stopped there once over the summer, but only for a few hours, and had to leave before trying out what was supposed to be one of the best 5.10’s in the High Country.  This time around, Pegleg 10d was the only route we did at the crag, but it was definitely worth the stop.  We found it just as good a sit was rumored to be – incredibly steep for 5.10, and with an amazing lay down rest to keep the pump at bay!

Our final stop along 221 was Moon Rocks, an area we’d never been to before but always wondered about.  The cliff itself is really neat, and I couldn’t help picturing how much fun Big C would have had playing around in the narrow corridor that was between the cliffline and a giant (as in 30 feet wide, 40 feet tall) boulder that was parked just a few feet away from the cliff.  A lot of the stuff that was within our pay grade was wet, but we did play around on a very sandbagged 11d (         ), that was wet AND mossy at the top.

All in all we had a great day together.  It was refreshing to be able to talk without being interrupted, eat our food without someone else trying to take it, and have some down time in between climbs where we could sit down without a little person crawling on top of us.  The icing on the cake was squeezing in 5 pitches and 3 crags in just under 6 hours! 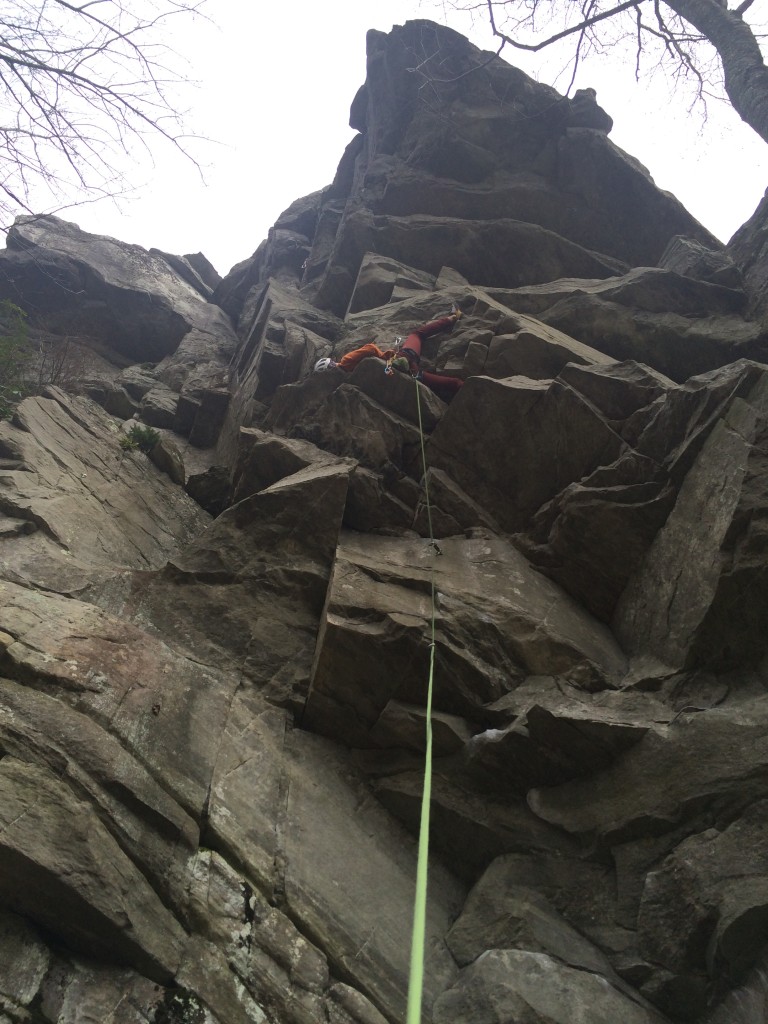 I don’t know when the next time we’ll have an opportunity like this will be, but it sure was fun, and I for one hope it will happen sooner rather than later.  But for the time being, there’s no one I’d rather have interrupt me, steal my food, and wrestle at the crag with than my own two kiddos…so I guess that means life is pretty good!

3 Responses to “A Crag-Date in the High Country”