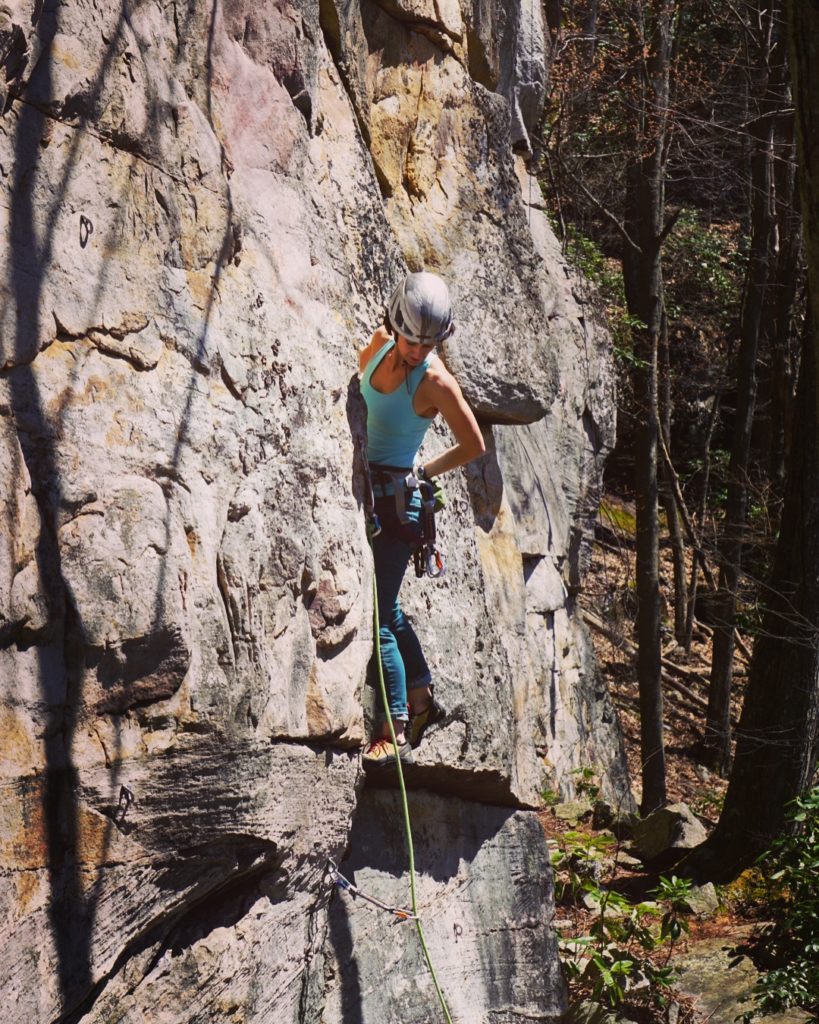 This past weekend I hit a huge personal milestone for me.  Though my climbing journey has more or less featured slow and steady improvement over the last decade (“more” during times of focused training, “less” during times of pregnancy/newborns), it has been FIVE WHOLE YEARS since I have broken into a new number grade.  But that all changed this weekend!

It actually started this past spring on our kid-free anniversary weekend at Hidden Valley, VA.  We had decided that sans kids was the perfect opportunity to test out the hardman(woman) waters, so we went project shopping.  I was drawn to Rodent’s Lament 13b, a line on the Falcon Wall, home of everything technical and vertical…aka my favorite wall at Hidden Valley.  The crux was pretty short-lived and really boils down to one singularly desperate move  – a long launch to a good slot off a terrible sloper crimp (aka “slimper.”)  I could barely initiate the movement before popping off, and I walked away inspired to include hangboarding in my summer training regimen.

Hangboard I did, but to be honest, I hadn’t given Rodent’s Lament very much thought again until recently.  Conditions took forever to get good this fall, then when they did, we spent a lot of time at the New.  When we did end up at Hidden Valley we were side tracked by the bounty of other awesome lines that are all a much shorter hike than the Falcon Wall (first world problems, right?!?)  CragDaddy, meanwhile, had slowly but steadily been putting in work on his project out at the Crazy Horse Wall (the 13a slab start of the 5.10 classic Spurs), and he was pushing for us to each have a project day. 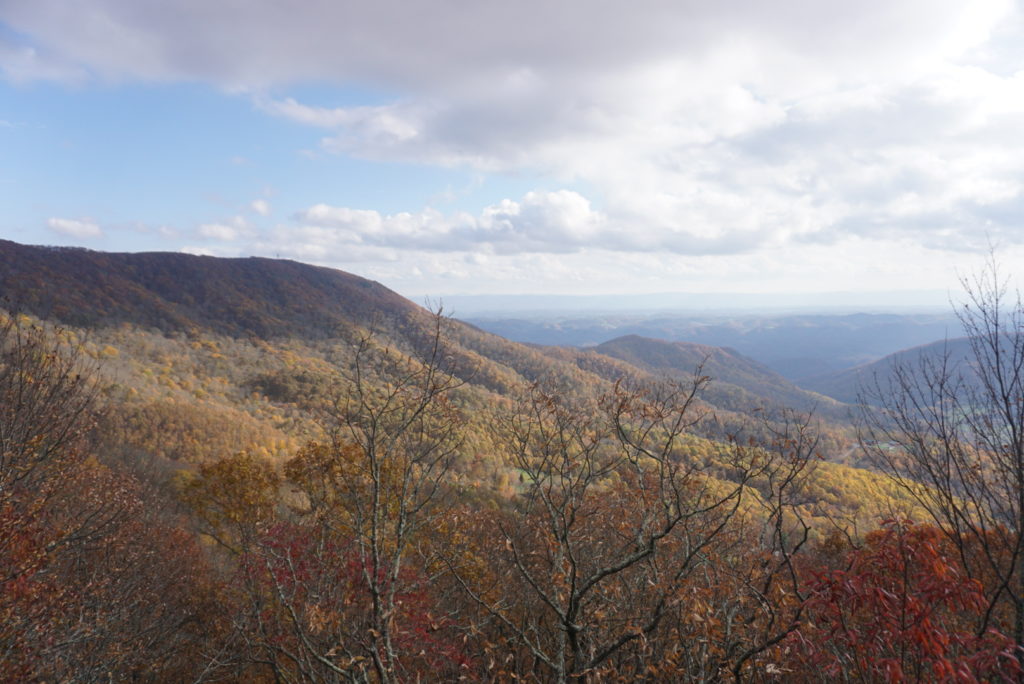 Not a bad view from the clifftop!

I was “cautiously cool’ with the idea.  Three weekends ago my psych was out the roof after sending Coneheads 12c…but since then we’d had a gym weekend at home, and then I’d gone on a girl’s weekend that had involved far more eating and drinking than it did exercise.  I had no idea what to expect performance-wise.  But what harm could it do, right? 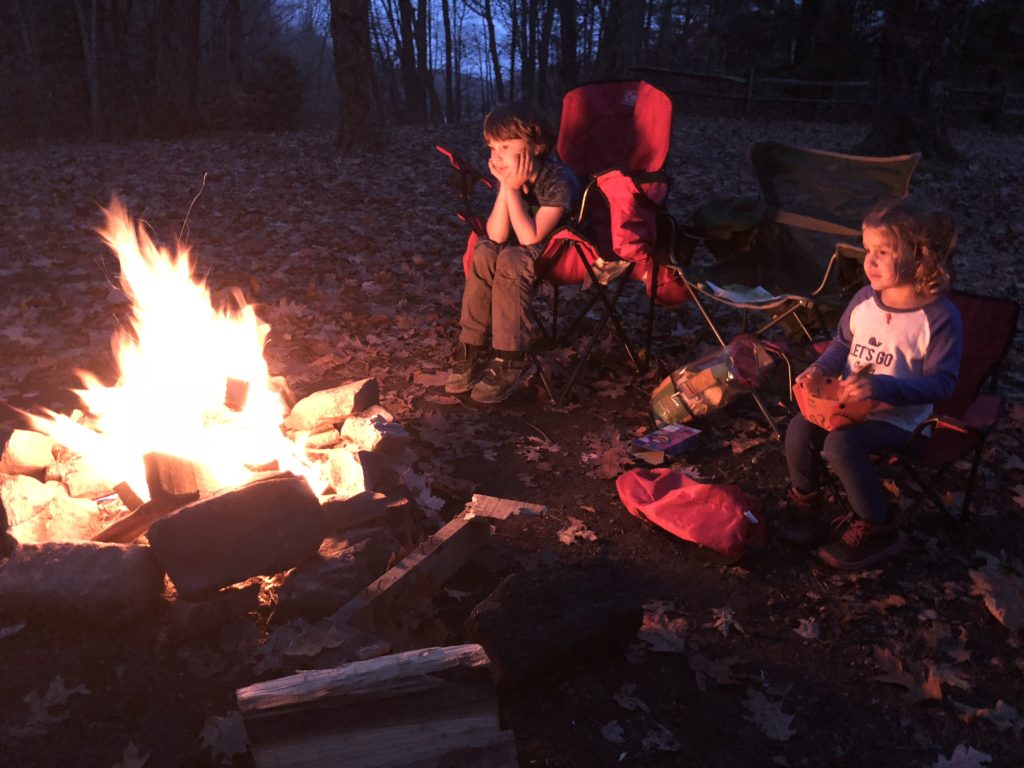 If you’ve never tried s’mores with your leftover Halloween candy, you’re missing out!

My first attempt started out great – the initial V4ish crux felt a lot easier than I’d remembered.  But the one (and a half) move wonder crux still felt ridiculously hard.  I probably tried the move 5 different ways 50 different times, but nothing.  Not even really close.  I decided to pull through and take it to the top just to give my fingers a break, then practice some more on the way down.  The upper bit is easier but more sustained, with a long sequence directly after the crux that probably goes around 11d/12a.  That part went really well, so when I lowered back down, I decided to battle with the crux  30 more times before giving up.

This time, however, I actually started making progress, first getting my fingertips even with the slot, then in it just a little, then a little more, until finally, I was able to hang on.  Shocked at this surprising new development, I started trying the sequence from a few moves earlier, coming in from the not-quite-hands-free rest 3 moves before.  It was hard…really hard…but I could do it!  Feeling good about both the start and finish of the climb, I now knew that if I could juuuust make that move once, I’d be able to send! 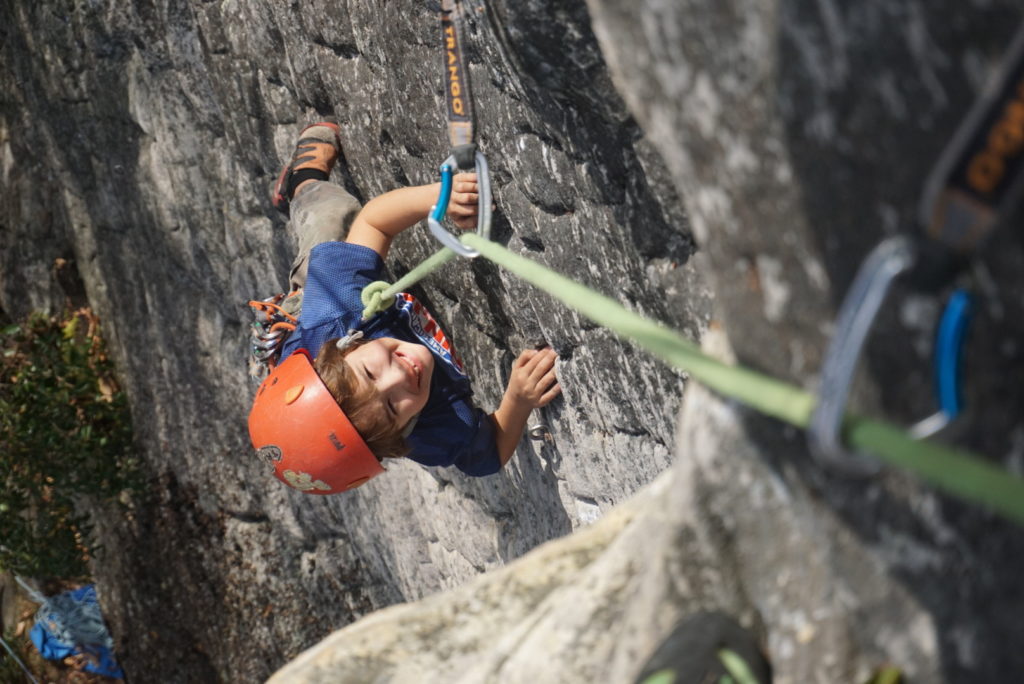 I was ecstatic that my next go was a one hang.  Even more exciting was that when I tied in for a final attempt, conditions were the best we’d seen all day.  No more cold mist, just fading light and dry, crisp air.  And apparently that’s all it took!  The crux felt the smoothest it had felt all day, and despite an adrenaline-induced elvis leg that started kicking in post-crux, I managed to keep my breathing under control and made it to the chains!

We celebrated Saturday night with an epic campfire and Halloween candy s’mores, then went out for CragDaddy’s project the next day.  He made decent progress before splitting a hole in his fingertip – while there’s still one move he can’t do down low, he’s now got the upper slab dyno on lock down.  (Ironically I found a great sequence that worked pretty well for me on the lower moves, but I got nothing for the slab dyno…if only I could tag him in and we could go for a team send!!!)  Day 2 was also a great day for Big C – he got in 4 pitches, with 2 of those even being “mock leads.”  (He’s been dying to learn how to lead climb, so we allowed him to tie in to the other side of the rope so he could practice hanging quickdraws and clipping in while still safely attached to a toprope belay.)

I am of course ecstatic to break a new number barrier!  I’m also, if I’m being honest, wondering if the route is a little soft.  In many ways, while none of the individual moves compared to the crux on Rodent’s Lament, something like Coneheads seemed harder to actually link together for a send.  That’s why one-move wonders are so hard to grade, because there’s hardly any “putting it all together” work that needs to be done – basically once you can do the move, you can do the route!  (And this particular move on this particular route suited my skill set and height perfectly)

But soft or not, I’m going to (re)take the advice that an old climbing mentor gave me a long time ago when I was first breaking into 5.12’s and down grading them all simply because “if I could do it, it couldn’t be that hard.”  He gave me some wise words that I’ve since passed his along to many people – “TAKE THE GRADE GIVEN IN THE GUIDEBOOK AND CALL IT DONE!”  His point was that grades are completely subjective, and that one person’s “softie” is another person’s “sandbag”, and that it all evens out in the end anyway.  Don’t downplay a route simply because it potentially plays well to your strengths, and don’t automatically assume a route is underrated just because it feels hard to you.

So there you have it – a 5.13 for me, and some words of wisdom about not going crazy analyzing grades, all wrapped up into one post.  Because despite how much we all love to debate climbing grades with fellow climbers (don’t act like you don’t!), at the end of the day it’s all just a bunch of arbitrary numbers.  But that said…5.13 is pretty rad! 😉