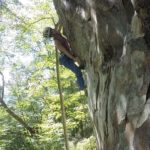 Were you aware of that?  You probably were.  For some reason, I’d forgotten.  Maybe because it’s been so long since I’ve touched rock as dry and crisp as it was this past Saturday.  Or maybe because I’d never experienced such a direct one to one comparison before on such a hard route.  But before I get ahead of myself, let’s rewind it back a few months to where this story actually begins.   I initially got on Death by Chocolate partly because it looked kinda cool and mostly because it was the only thing dry over Memorial Day.  Then, as usual…Read the rest of this entry →