Any climbing area NOT included in the others! 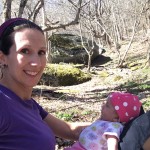 As Baby Z gets bigger by the day, the weather has gotten more and more beautiful and enticing, causing our family to come down with an increasingly worsening case of spring fever!  Hubby and I have been chomping at the bit to hit our favorite spring climbing areas, and Big C has been psyched to try out the new sleeping bag he got for Christmas.  So when a friend of ours suggested we hit up Grayson Highlands State Park for some bouldering (thanks for the nudge, Michael Chickene!), we decided there was no time like the present for 8 week…Read the rest of this entry → 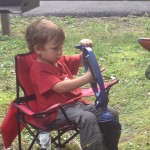 If I had a dollar for every time one of our crew said the word “manky” this weekend, I’d have plenty of money for a nice date-night dinner with the hubs.  For those of you that aren’t familiar with this highly technical term, “manky” is generally an accurate descriptor of summer climbing conditions in the Southeast.  The rock feels greasy, palms are sweaty, and chalked up holds feel like they are coated in a layer of slimy toothpaste.  Not to mention that smothering wet blanket of humidity Mother Nature tosses over your head while hiking in and out of the…Read the rest of this entry → 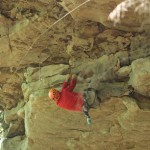 Historically if the weather is good (or often times even if it’s not), 90% of Southeastern climbers migrate to one of two world-class hot spots for Memorial Day Weekend – either the New River Gorge in WV or the Red River Gorge in KY.  But for 3 years running our family has chosen to head in the opposite direction to the Obed River – a smaller (but almost just as good) climbing area just west of Knoxville, TN.  Generally speaking, a “crowded” weekend at Obed is about the same as the average non-holiday weekend at the the New or the…Read the rest of this entry → 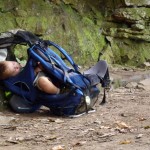 The Obed Wild and Scenic River is our family’s favorite crag to hit over Labor Day weekend – it’s nice to have an extra day with the longer drive, and we’re able to avoid all the crowds that are swarming at the New and Red River Gorges.  However this time probably could have been talked into going just about anywhere  had the forecast been any better, but it appeared that the entire Southeast was being held hostage by Hurricane Isaac.  We weren’t too worried about the climbing – because of the steep terrain and enormous roofs, the Obed is a…Read the rest of this entry → 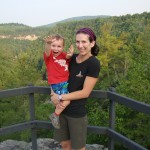