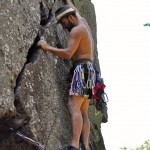 As many of you know, my work on the Central Piedmont climbing guidebook I’ve been slaving over for the past year and a half is drawing to a close.  Almost all of the writing is in the publisher’s hands at this point, who is now working feverishly on the layout with the guy making the topo maps.  That being said, I just wrapped up the a final interview that will be featured in the Crowders section.  It’s an interview with a local climber who is wrapping up an inspiring endeavor, and since it had been a while since I’d posted an interview…Read the rest of this entry →