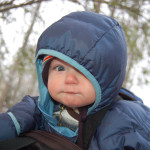 Before I became pregnant with my first child, I was blessed to have some like-minded friends who were just phasing out of the life stage we were just getting ourselves into.  Their then-toddler would be their last child, and they were actually preparing to move to Germany…which meant our family was one of the many to benefit from their infant outdoor gear archives! We scored bigtime in the clothing and shoe department, most of which at this point has either been worn into the ground or given to other families of outdoorsy little boys who like to play in the mud.  However,…Read the rest of this entry →