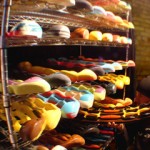 If there were just as many rock climbers as there are automobile drivers, the city of Detroit would be back on the map thanks to DRCC (Detroit Rock Climbing Company).  On the other hand, that many rock climbers would surely create an access issue nightmare, so it’s probably just as well that climbers stay in the minority…I had actually never heard of this company until just recently, when my hubby and I decided that we needed a hangboard in our rec room.  After lots of comparison research with boards we had already used, boards friends had used, and the good ole…Read the rest of this entry →