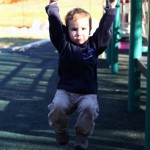 “You can do anything you set your mind to.” Benjamin Franklin said it first, but it’s been said millions (and probably billions) of times since then.  It’s one of those inspirational, “action phrases.”  Teachers say it to their students to motivate them to aim high, and parents whisper it to their children to encourage them to dream big.  I’m sure we’ve all heard someone say it to us at some point, and in turn, I’m sure we’ve all said it to someone else.   It’s also the phrase that immediately popped into my head when I saw this picture.  Some…Read the rest of this entry → 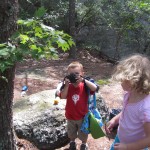 This weekend marked 7 months (almost to the day) since I broke my ankle on a funky lead fall last winter.  I paid my dues in a boot for 6 weeks, worked my butt off on the hangboard, and got back on the sharp end of a rope the second I was given the green light.  I waited a good long while before bouldering in the gym again, and when I finally got back to it I mostly kept it to problems I had wired and could use for 4×4 training sessions.  Because the hubs and I take turns…Read the rest of this entry → 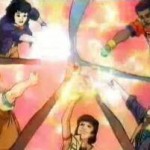 For those of you readers that are on the other side of 30, you may remember a TV show called Captain Planet.  The heroes of this kid’s series were 5 environmental good guys, known as “planeteers,” each possessing a magic ring that controlled an element of nature (earth, wind, water, fire) that they would use in their valiant battle against pollution.  Then there was the fifth guy – his magic ring supposedly gave him the power of “Heart.”  As kids we always thought this guy was dorky – the other planeteers were all much more suave and cool.  In fact I…Read the rest of this entry → 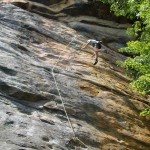 But I do.  And it sucks.  Not sure why, but this weekend made me feel old.  Maybe it has something to do with the fact that I twisted my ankle (the one that I used to consider my “bad” ankle until I broke the other one…) just hiking into the crag on Day 1.  Thankfully it seems to be nothing more than a minor inconvenience, along with an annoying,  rainbow-colored reminder that my Earth-Suit ain’t what it used to be.  Or it could possibly be related to the fact that I realized that not one but several of my climbing…Read the rest of this entry → 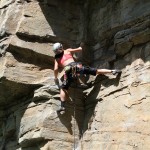 I mentioned in my last post that I’d be separating the weekend out into two posts, since each day was so different from the other.  I thought it would be fun to change things up a bit, so rather than the typical play-by-play trip report, I thought I’d focus on “projects.”  For those non-climbers out there, the term “projecting” is used to describe the process that one goes through to successfully redpoint a route near or at their limit.  A route is considered “sent” (aka redpointed) when the climber is able to lead the route from bottom to top (bringing the rope up with them…Read the rest of this entry →