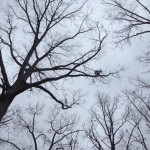 Not sure if anyone else around the country can relate, but North Carolina has been having some really weird weather lately.  I’ve seen lows in the 20’s (accompanied by ice) and high’s in the 70’s (accompanied by heavy winds) in the span of just one week.  C and I decided to take advantage of one of the warmer days last week with a morning hike at Beatty Park.  The forecast had called for rain, but not until the afternoon, so I packed some water and snacks while C took on the arduous task of deciding which bulldozers got to join us on…Read the rest of this entry →