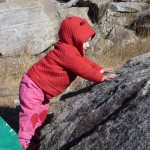 Last weekend’s adventures almost came to an abrupt end before they even began, thanks to a weird tummy bug that was indiscriminately making the rounds through our house.  It started out innocently enough with a mild case of upset tummy for Baby Z (which initially we thought could be teething-related), then climaxed in the middle of the night on Thursday when both Big C and the Crag-Daddy were doing a synchronized barf bucket routine.  Amazingly enough, the bug was apparently extremely short-lived because everyone, though weak as kittens, was finished with the involuntary stomach emptying by Friday morning. That meant that by Saturday…Read the rest of this entry →

Last week there were two gorgeous sunny days in a row smack dab in the middle of the week, which amazingly enough fell on days that the Crag-Daddy had off work – New Year’s Eve and New Year’s Day. And what better way to spend the END of 2014 and the START of 2015 than at the crag with family and friends? NEW YEAR’S EVE: We wrapped up 2014 with a day at Rocky Face, which was an outdoor staple for our family during the latter stages of my pregnancy .  For obvious reasons – the routes start less than 50 feet from…Read the rest of this entry → 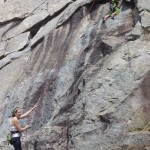 When it comes to new babies, it seems like the topic du jour always involves developmental milestones.  Is she sleeping through the night yet?  When did he start walking?  And, have you started with solid foods yet?  But I like to think that each family has their own unique milestones to achieve as they grow and develop within a changing family dynamic.  For us, one of those milestones is “first outdoor climbing trip.”  With Big C, that happened at 6 weeks, on a bluebird spring day at Pilot Mountain.  Since Baby Z was born in the same month (this not…Read the rest of this entry →

It was Rocky Face, Round 4 for our family this past weekend.  This little quarry crag has become our local hangout of late.  Even though it’s a farther drive than other local crags, the zero approach factor is quite appealing at this point in my pregnancy.  Add that to the fact that it bakes in the sun and even has routes easy enough for my 3 year old to enjoy, and it’s the perfect winter destination for our family right now!   After one trip to get our bearings, and another two trips to tick off the classics on the…Read the rest of this entry → 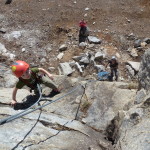 Tradition states that every year we MUST go climbing on the Crag-Daddy’s birthday with as many people as we can round up, followed by a big party at our house afterwards.  Usually the wide range of abilities represented and the sheer amount of people means we wind up at the Dixon School Rd boulderfield.  It offers decent winter conditions, and is just down the road for all the local folk.  We usually also end up with a few out-of-towners that crash at our house for the night.  Steve’s birthday is not actually until the 23rd, but the past couple of…Read the rest of this entry →