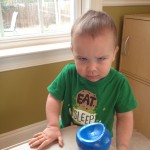 Sometime in early December my little stand-up comic realized that he could get quite the reaction by furrowing his eyebrows and glaring in a rather “Omen-like” sort of way…Although he doesn’t do it as much anymore (funny how baby trends go in and out of style faster than what’s on the red carpet), C’s “stink-face”, as we christened it, was the source of quite a few dinnertime guffaws. Upon seeing the stink-face out of context, you might mistakenly assume that C is angry, frustrated, mad, or some combination of the three.  But the funny thing is that C only chooses…Read the rest of this entry →