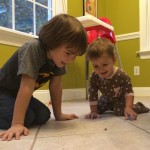 Last Monday we were almost late to school because of a stink bug.  Yup, a stink bug.  Actually, a brown marmorated stink bug to be exact.  But that’s how the saga ends, not begins.  Let me back up. It had to be at least a month ago when I first noticed him (her?) motoring around the walls around our kitchen table.  “Look at the stinkbug!” I announced to Baby Zu, pointing.  Her eyes lit up as her gaze followed him around the room, and her tiny pointer finger bobbed up and down excitedly.  “BUH!!!!!  BUH!!!!!!!” she sang out.  We watched together for a…Read the rest of this entry →