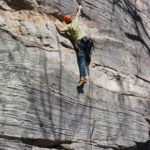 The climbing at Hidden Valley has been on our radar ever since the Carolina Climbers Coalition purchased the land at the end of 2014.  Early reports from friends sounded appealing – short approach, winter sun, summer shade.  But somehow we never managed to get up there until this past weekend.  A couple of times we did make plans to go – but then kids got sick, or the weather was yucky, etc.  But mostly, it’s just hard to get us away from the New during prime climbing season.  I guess we’re just spoiled that way!   Anyway, after lots of…Read the rest of this entry →