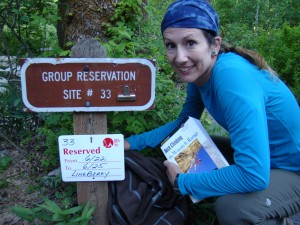 Day 1 ~ Outside Corner, w/North Face variation, 5.7
Pitch 1 – Steve led the first pitch, a fun wandering crack system that wandered up and out to an arete, and up to a ledge.  We saw Norbert and Manuela driving up as we were just getting started.  They spent the day at the Salt Lake Slips, where our line was in clear view all day.  They were thoughtful enough to check on us throughout the day, and document our progress via photos 🙂 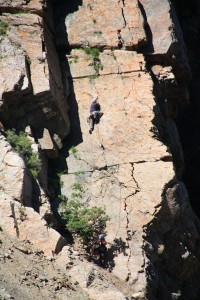 Steve leading off pitch 1 of Outside Corner 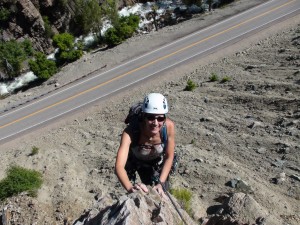 Moving up the arete on the first pitch

Pitch 2 – Short, but sweet.  I scrambled up a series of broken crack systems til I got to a giant ledge.  After Steve came up, we decided to take in the views with a snack break, since the ledge was so big. 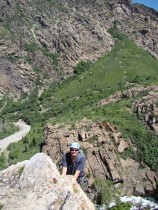 Steve stopping to pose on pitch 2

Pitch 3 – I was really proud of Steve for leading this pitch.  The crux was 15 foot hand crack right off the belay.  It felt pretty stout, but he stuck with it.  On a weird note, as I was cleaning the lower anchor and getting ready to follow Steve up, a strange man appeared on our ledge…he was free soloing his way up our line, and asked if I minded if he passed.  He kind of sneered at me as he said, “I’ll be out of your way in a minute.”  I worked my way up and was happy to find out that Steve had asked the soloer about the descent as he passed him, but was slightly confused b/c his directions conflicted what the guidebook had said.  We figured that when in doubt, trust the climber, not the guidebook that was written 10 years ago… 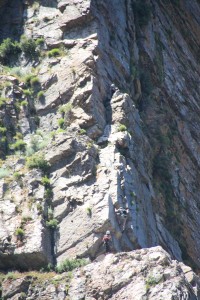 Getting past by someone w/o a rope is humbling.

Pitch 4 – I took this pitch, and decided to go for the exposure on the N. Face variation, rather than heading left to stay on the East Face.  As it turns out, Steve stopped to belay a little early on the last pitch, which I noticed when I had climbed about 30 feet and saw a bunch of slings in the obvious “cave belay” spot.  It was then that I realized that Steve had forgotten to hand off a lot of my slings, and I had forgotten to give him back his nut tool (since mine was stuffed in the car after our sport days in Logan).  I kept going a bit, and when I realized how much farther I needed to go and how many nuts I was placing, I figured I better stop and bring Steve up so we could make the switch.  I built a semi-hanging belay near an alcove of sorts, and Steve followed up. 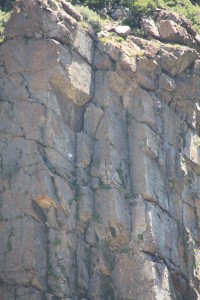 Feeling exposed on the North Face!

Pitch 5 – WOW, was this pitch exposed!!!  The climbing was fun, and pretty sustained.  There was more loose rock than I thought I would find, but it was easily avoided.  I found the gear to be a little more sparse than I would have preferred, but the gear I had was really solid.  I kept moving up to what I thought would be a good gear stance, only to find a flare or a seam.  I managed to get some really good gear in before moving out over the exit roof sequence.

Descent – Now little did we know that this would be the real crux of the day.  I would hate to think that the soloist gave us bogus directions.  Its hard to believe that anyone would knowingly put other people in a potentially dangerous situation like that.  But, whatever happened, we found not even a trace of a trail.  We looked both all around the summit in every direction.  After about 30 minutes, we decided that the best option was to take the path of least resistance – the low angle dihedrals that we could butt scum down relatively safely, that led to over an hour of slowly scrambling and sliding down steep scree.  One rock that I stepped on rattled LOUDLY…Steve and I practically teleported 10 feet to the left.  We never saw the snake, but are assuming based on the size of the rock that it was pretty small 🙂 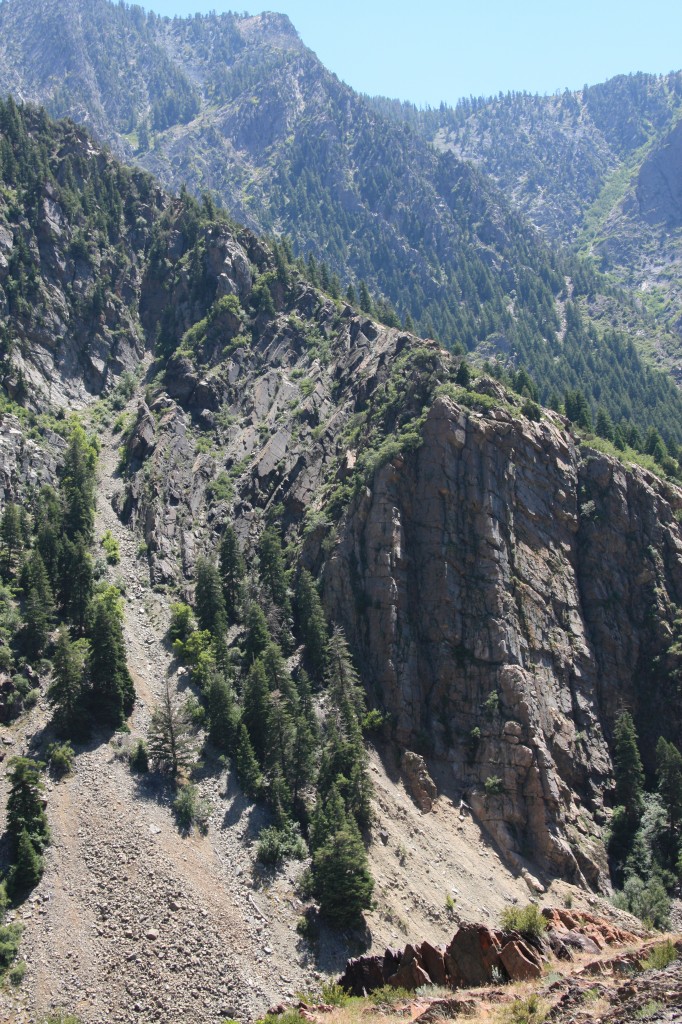 We FINALLY got down, and on the way back to camp stopped off at the Cottonwood Heights Rec Center to wash off 4 days worth of dirt.  What I didn’t realize until I walked in was that the shower area was obviously used 99.9% of the time for rinsing off in your bathingsuit before hitting the pool, as opposed to nude, dirty, sunburnt climbers scrubbing themselves after many days of playing outside.  But what else could I do?  There had been two 10 or so year old girls playing in the shower area, running from one shower head to the next, over into the locker room area, then back.  After a couple minutes of hard work scrubbing my bod, one of the girls came careening around the corner.  She took one look at me, almost fell down trying to turn around as fast as she could, and I never saw them again.  They probably went to tell the lifeguard about the homeless woman in the bathroom… 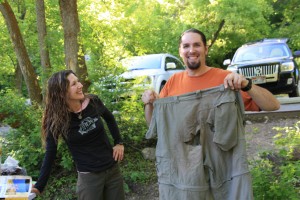 Unfortunately Steve's pants did not survive the Outside Corner descent.

After feeling much cleaner (even though according to the mirror I still had dirt in that hard to reach spot on my back), we finally made it into our campsite around 700.  What a wonderful sight it was to see Norbert and Manuela already there, with a hot grill, loads of meat, fish, and veggies ready to throw on, and chips and salsa – who could ask for better friends!  We had a lovely evening comparing climbing notes, sharing pictures, and discovering that we all had similar shower stories.

Day 2 ~ Lieback Crack, 5.5
Pitch 1 – What a nice relaxing day we had!  The crux on this pitch was the first 30 feet, and it felt pretty stout for 5.5, but from then on, it was an easy, straight shot to the belay ledge.  Manuela didn’t want to lead it, so Steve trailed a rope up.  Not sure why it was called “lieback”, b/c none of us really did any layback moves – it was all face climbing with a jam here and there. 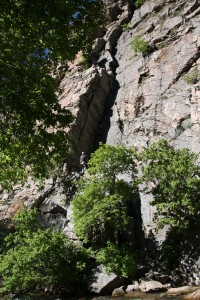 Pitches 2 and 3 – Steve didn’t feel like leading today, so I stayed on the sharp end and linked the last two pitches together.  Nice, casual romp to the summit with great gear.  The summit was beautiful, and gave us a great view across the road of our line from yesterday, but best of all, the walk off was both obvious and easy 🙂 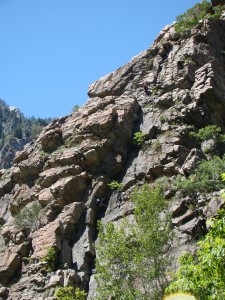 We were all feeling a little tired and sore, so we decided to go ahead and break down camp, and get going down to Maple Canyon, rather than hanging around in SLC and getting up early the next morning.  We stopped to eat way too many garlic parmesan fries at the Red Robin in Provo, and made it to our campground just in time for a beautiful sunset which we unfortunately had to share with loads of bugs. 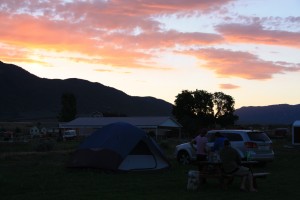