So in my last post, I mentioned that we made some new friends at Pies n Pints during our visit to the New last weekend.  We overheard the couple at the table next to ours talking about their day at the Bridge Buttress, another New River Gorge climbing area, so we decided to see what routes they had gotten on.  We ended up talking to them the rest of the time while we ate – Josh and Erin were their names, and they were from Johnson City, TN.  We compared notes on our activities from the day, discussed our plans for the next day, and chatted about the cliffs in NC and TN that we each frequented.  It turned out that we were staying at the same campground, only a couple of sites away from each other.  We even scored an invite to toast some marshmallows at their campfire later on that night! 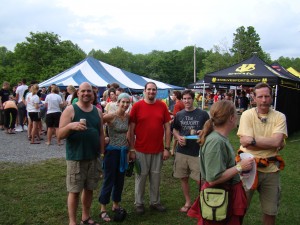 Hanging out with new friends at the '09 Rendezvous

I think that this perfectly illustrates one of my favorite aspects of climbing – the social scene!  When you are avid participators in a sport that not many people do (or even know about for that matter), there is a strong sense of community with others that share your passion.  Its no stretch at all to find meaningful conversation from a 4 hr stint in a car to and from the crag week after week with the same people over and over again.  On the way there we tell tales of previous adventures with the people we are with, or from the place we are headed to.  On the way back we recount the new stories from our latest day of cragging, sometimes embellishing a bit for posterity…

Now, don’t get me wrong – no matter where you go on the planet, you are going to find snobby and pretentious people, and the climbing world is by no means excluded from this.  However, by and large I have found folks from the climbing community to be some of the most generous, sincere, and friendly people I have ever come across. 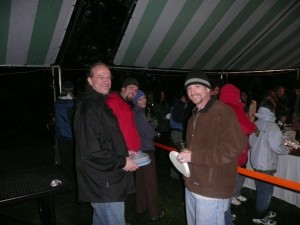 In line for Dessertapalooza at the '08 Rendezvous

Several years ago when I first started climbing, I was really intimidated by the stronger climbers in our community.  I felt that since I was a “newbie” that I shouldn’t expect to be able to associate with the ones who could really crank hard.  I figured we didn’t have anything in common, and that me recounting my fears of my first 5.4 sport lead would just sound silly to anyone that could onsight 5.12. 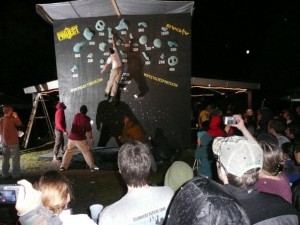 Watching the "Dyno Comp" from Rendezvous '08

And then I went my first “New River Rendezvous” in 2007, a weekend long climber’s festival where climbers from all over the country come with a mindset to climb lots of routes, eat lots of food, meet new people to climb with, and raise money for the New River Alliance of Climbers (NRAC).  I didn’t meet a single person there that I didn’t like. (and there were close to 1200 people there…)  A lot of them were much more experienced climbers than me, but there were also a lot of beginners there as well.  And none of that really mattered, b/c we had the most important thing in common – our love for the rock.  Some of us were boulderers, some of us liked to clip bolts at the local sport crag, and others liked to place their own gear on long traditional routes.  But the neat part was that it didn’t matter, b/c no matter what type of climbing we were doing, no matter what difficulty level we were climbing at, we had one thing in common – we loved getting vertical on the rock! 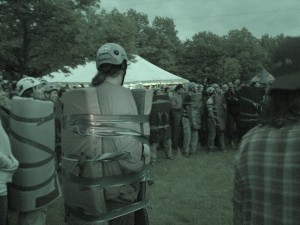 I have been fortunate over the years to be able to meet several climbers that have been blessed with the opportunity to more or less make a career out of the sport they love (some by winning competitions, but most by being sponsored by climbing equipment companies) and almost everyone has been down-to-earth and genuine – some I didn’t even realize how “famous” they were until after our conversation.  The bottom line is that it doesn’t matter where you are on the totem pole of climbing – as long as your in the game at least, you share a bond that the average member of society will never understand – and that, I have learned, is pretty special. 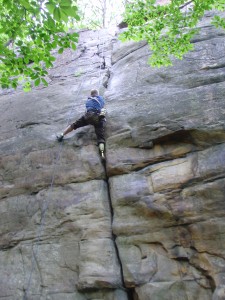 Getting some crack climbing tips from "Trango" owner Malcolm Daly

I think that this same attitude should be reflected in the churches of today, but sadly, so often it is not.  Just like there is such a wide variety of types of climbers, there is an infinite variety of Christ followers.  However, the differences shouldn’t cause contention.  Just like the V10 boulderer can relate to the 5.5 multipitch trad climber b/c he loves the rock, the non-denominational inner city kid should be able to relate to the middle-aged front row Baptist because she loves Christ. 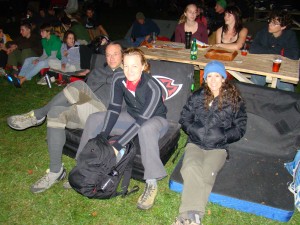 Hound Ears '08 - another fun party weekend for the climbing community

Even though everything about us and our styles may be different, the one thing we have in common is really the only thing that matters anyway.  It doesn’t mean there won’t ever be differences, and where there are differences there is invariably conflict, but if we all started looking at what we have in common rather than what we don’t, the church would be based on unity rather than denominational discrepancies, and I daresay the world would be a much happier place. 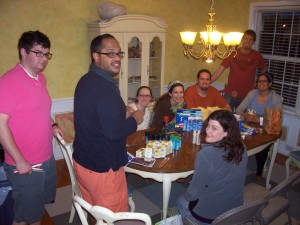 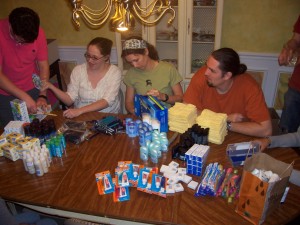