We left the Idaho Falls airport on Saturday around lunchtime, and drove 2 hours thru southern Idaho to the city of Logan, just over the border in Utah.  Our original plan was to drive east to the High Uinta Wilderness outside of Kamas, but apparently there was a lot of snow this year, and the melt off wasn’t quite as far along as it usually is this time of year, so most of the routes were running with water, with 10 foot snow drifts at the base.  So, one  could say that our Logan Canyon plans were sloppy seconds, but several of the routes there ended up being highlights of the week! 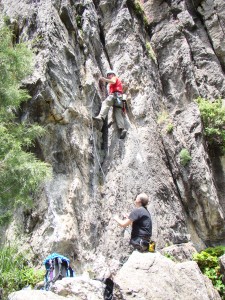 We rolled into the Wood Camp campsite in the pouring rain, and set up our tent in a mudpit by the (wildly flowing) river.  Things were not looking good for climbing the next day.  Norbert and Manuela were a little late in meeting us, thanks to United leaving one of Manuela’s bags back in RDU.  The next morning dawned cloudy, but not rainy.  The boulders at our campsite were dry, so we decided to go exploring.  We started at the Kentucky Fried Penguin Wall, since the two climbs there seemed like good warm-ups, and they were right off the road.  While there, we were met by two Koreans (that did not speak ANY English except the word “climb”) who apparently were climbers back home, but were on vacation here. 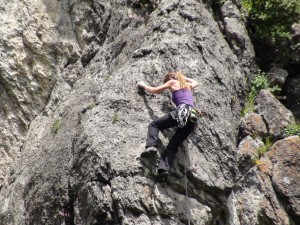 Me on Community Effort

They were especially interested in our guidebook, and wrote down directions to the store we had bought it at the day before.  It started raining on us a bit, so we got back in the car and hit up Fucoidal Quartzite (careful how you say that…), since a few of those routes would be protected from the rain by a big roof.  It cleared up about 30 minutes later, and turned into a beautiful day! 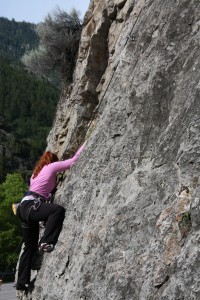 We didn’t run into any other climbers – we even joked to Manbert that we had rented out the canyon for them.  We did run into two good ole boys from SC that were in Logan on business.  They saw us on the rocks from the road, parked, and hiked up to see “what sort of craziness was going on.”

Day 1 Routes ~
Kentucky Fried Chicken – 5.8
Kentucky Fried Penguin – 5.9
Illusions – 5.10a – a tricky, sharp, sequence down low led to really fun layback climbing.  Steve’s first 10a flash!
Community Effort – 5.10a – everyone liked this route until it got weird and a little contrived up near the top
Cushions – 5.10c – cracks, crimps, burly moves…a little bit of everything on this beautiful arete high up in the canyon.  Fantastic climb!
Drilling in the Dark – 5.7 – really fun face climbing on incut jugs…the kinda climbing you wish would go on for hundreds of feet at a time! 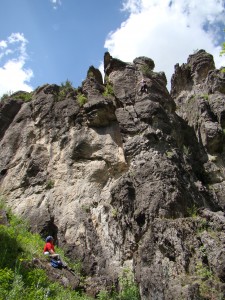 Steve belaying me on Cushions 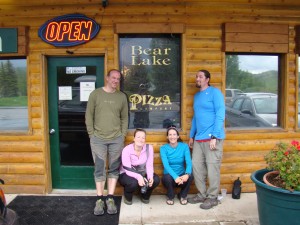 Filled with pizza, milkshakes, and contentment 🙂

Instead of driving back into Logan for dinner, we decided to drive to the end of the canyon, which spit us out at Bear Lake, a gorgeous turquoise lake in the middle of nowhere!  We enjoyed the views and local culture at Bear Lake Pizza – but the best part of the evening were the Raspberry Milkshakes!!!  I swear its one of the best tastes that have ever entered my mouth…we split one four ways, but ended up staying longer in the restaurant due to a passing thunderstorm, and by the time it stopped, we were ready for Milkshake Round 2 🙂 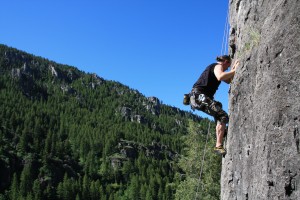 Monday morning dawned a beautiful day, without a cloud in the sky!  Our destination today was the Betagraph Wall, a smaller wall that sits high up in the canyon, with several really high quality lines.  We had the wall to ourselves all morning, and were joined by a nice band of Mormon brothers later in the afternoon.  Both the views and the climbing seemed even better than the day before! 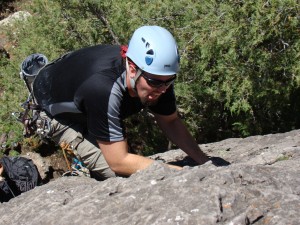 Steve having a blast on Holy Toledo

Day 2 Routes ~
Alphanumeric – 5.8 – Norbert accidentally pulled off a BIG rock about 2/3 of the way up.
Holy Toledo – 5.10b – crux down low, backed off towards the top.  Steve’s highest onsight to date!  We had some fun taking videos/pics from above by setting up at the top of Alphanumeric.  Its nice to have some pictures that aren’t just butt shots!
Babalishes – 5.10d – the guidebook says this route was the best 10 in the canyon, and none of us can disagree.  Big, bouldery moves to giant flakes, thinned out a bit at the top.  I blew the onsight by aiming too low on a dynamic move to a flake, but after everyone else had gone thru, I pulled the rope and got the redpoint, and one of our new Mormon friends wanted to clean the route for me.
The Fairy – 5.9 – we all thought this route was a little weird.  The route wandered a good bit, and was pretty tricky/pumpy for the grade. 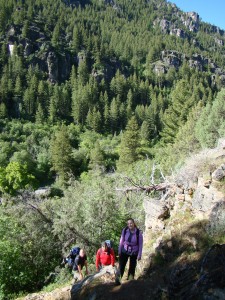 Hiking up to the Betagraph Wall 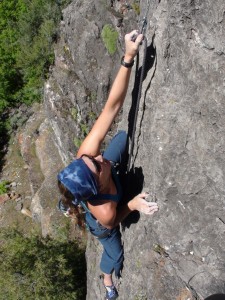 Me on Holy Toledo

On to Salt Lake City!  We headed south for about an hour and a half to our campsite in Little Cottonwood Canyon, but not before stopping at Wendy’s for a Frosty! 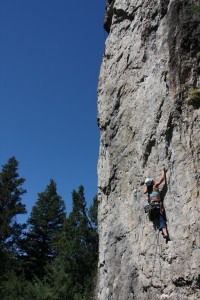