Finally the weatherman got the order right – an absolutely gorgeous weekend followed by a dreary, cold, and rainy Monday morning! This was the first weekend out of several that hasn’t been a washout, and Steve and I were not about to let it go by without taking advantage of it! We invited our friend Huck to go with us – one of the new folks we had climbed with at the Red a few weeks ago. Huck is somewhat of a new climber, and was eager to try out some new crags he’d never been to. Also, he’d never done any multi-pitch climbing, which was our goal for Sunday, so we figured it would be fun to give him the opportunity for that. 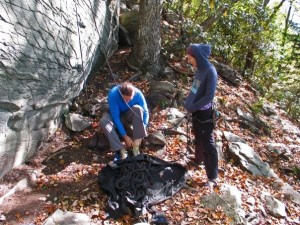 Steve lacing up for our first climb of the day.

We left our house bright and early (actually so early it was dark rather than bright) on Saturday morning and headed to Boone, NC, where we climbed at the Warpin Endorphine Wall, sometimes affectionately known as “The Dump”. This is a very small, not very well-known area off of Hwy 221. The cliff is about 2 minutes from the road pull-off, but its not very tall and covered up by the trees, so you could drive past it a hundred times without ever thinking anything was there. Here’s what we did on Day 1… 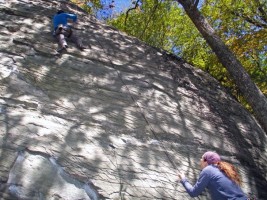 Slimen Hymen (5.10a) – classy names, I know…
Vermin (5.10b)
Voodoo Child (5.11a)
Homegrown (5.9+)
Chromagnon (5.11a) – this was the first time we’d ever seen this route and the next route dry, and Huck was psyched to lead them, so it was fun to get on something new!  As typical with the routes here, the start was kinda bouldery, and got thin and technical up near the top
Boyz n’ Berry Dickcheese (5.10d) – very similar to Chromagnon, but not as reachy.  Huck took some decent whippers putting this route up, and I was able to get a couple on video (though unfortunately not the best one…)
Warpin Endorphine (5.11b) – my favorite climb at the crag, we do it every time we go there. I didn’t get it clean, since I had completely forgotten my beta for one particular section, and wasted a lot of energy hanging on bad holds trying to figure out what to do. At first I was slightly disappointed that I had to hang, but all in all I felt really strong on it, and I figured I’d give myself some 14 week pregnancy grace. 🙂 I’d better get used to the fact that as my belly gets bigger and bigger, my balance will get worse and worse!

Huck demostrating why lead falls are not an option for the JellyBean! 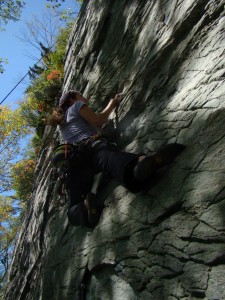 We finished up just before dark, and drove back in to Blowing Rock to eat at The Mellow Mushroom, a post climbing favorite of ours. The wait was long, but the outside seating was first come, first serve, and there was no one out there. We went back to the car and grabbed some more comfy layers, and set ourselves up on the porch. I noticed a few folks on the inside giving us funny glances, but hey – we were done eating before they got started!

After dinner, we drove just under an hour up the winding, gravel, mountain roads towards the Table Rock parking area, which is the starting point for lots of climbing throughout the gorge. Our favorite campsite seemed ridiculously crowded, so we kept driving til we found another pulloff that Steve and I had camped at once before. We went to bed as soon as we set our tents up, and once again, got up just before dawn the next morning. 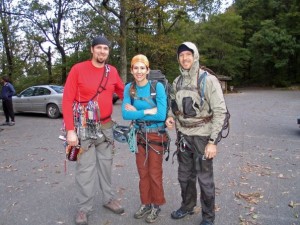 Steve, me, and Huck moments before we set off for The Daddy

We were surprised at how windy it was all day. I think we all ended up keeping on more layers than we originally thought we’d need, but the temps were quite pleasant, and the clouds kept the sun from beating on us. Our goal for the day was the classic 5 pitch route called “The Daddy”, located deep in a remote area of the gorge. Steve and I had done it twice before, first with our friend Emil not long after we started climbing, and once by ourselves last summer in preparation for our trip to Squamish, BC. The views are absolutely spectacular, especially at this time of the year, but the main reason we wanted to head into the gorge this weekend is because it would probably be the last time in a really long time we’d have the chance. When climbing in the Linville Gorge, the “crux” of the day is often the approach hike. The first part is fantastic – about 30 minutes or so of casual hiking on the Mountains-to-Sea Trail along the ridgeline with breathtaking views and unusual rock formations on either side. 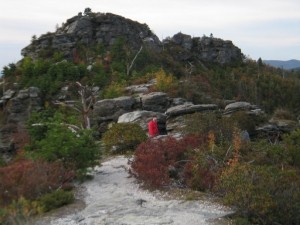 Steve hiking along the ridge towards the gorge.

Next, you look for the “big white rock” along the side of the trail that marks a narrow, overgrown spur trail that heads down towards the gorge at a fairly steep angle. But the last part is where I had concern – after about 15 minutes on the spur trail, you hit a giant rock (where we stashed some water for the hike back), and from there, start the harrowing descent down a steep, rocky, and often wet gully down into the gorge, towards the river. My friend Christine did this when she was 5 months pregnant, and said she was scared because her center of gravity was off and she felt unstable and insecure. Considering that I’m in my 4th month, and that an approach of this magnitude would not be first on our list of comeback trips w/a baby, we decided that it was now or never. 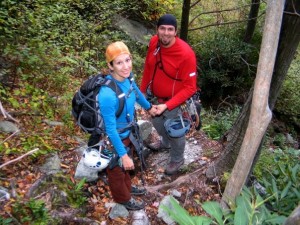 I’ve already noticed that strapping anything on my back makes me out of breath, but I felt fine on the hike. The gully proved to be challenging, but its strenuous enough non-pregnant, so I don’t think I can use that as an excuse! After around 45 minutes of scrambling and sliding our way through the briars and rocks, we finally got to the reward of the day – casual, easy climbing on beautiful rock for about 500 feet!

***Non-climber note – a “pitch” goes from one belay spot to the next, usually about 100 feet or so. A “multi-pitch” route is where the climbers keep going up after the first pitch, putting them more than one rope length off the ground, such as our Day 2 route. “Single-pitch” climbing would be what we did the day before, where we head to the ground after climbing, rather than continuing up.*** 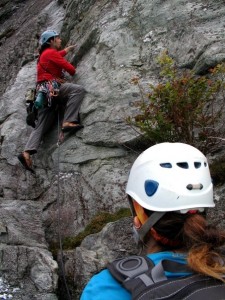 The Daddy (5.6) –
Pitch 1 – a casual romp past a couple of ledges with trees to a slightly steep finish on a big ledge
Pitch 2 and Pitch 3 – P2 starts up a flake system, then traverses right to a ledge. P3 is very short, and we always link the two together as one. Huck and I both took advantage of a top anchor, and decided to do the steep and completely gearless 5.8 variation to get to the belay ledge, where we all stopped for a lunch break. 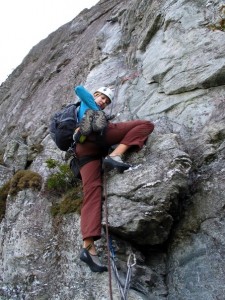 Me and the Jellybean following up Pitch 2.

Pitch 4 – trends right across the face past a chimney up to a belay nook that takes some finagling to fit everyone in comfortably.
Pitch 5 – this is by far the money pitch, even though its short! A beautiful crack system to a finish that is very steep for the grade leads to a fantastic view on the summit! 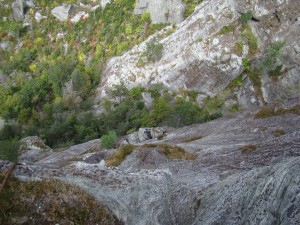 After taking a few pictures and minutes to rest at the summit, we proceeded bushwhack our way through the overgrown trail along the very exposed rim of the gorge to get back to the rock where we had stashed our water. Then we trucked it back up the spur trail until we were back on the Mountains-to-Sea Trail along the ridge. We took our time hiking back, and ended up running into several backpackers who were hiking from Shortoff Mountain to Little Table Rock over the course of the weekend. Our car to car time was about 7.5 hours, even though the actual climbing only took around 4, which we were pleased with considering we had a party of 3 and one of them was pregnant. 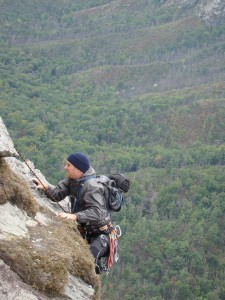 Huck topping out with a surreal view!

After burgers and Frosty’s at Wendy’s we found ourselves back before 9, and in bed shortly after. As a side note, I almost panicked when I changed out of my nasty climbing clothes and caught a glimpse of a 2 inch long, purply-reddish mark on the back of my left hip. My first thought was, “OH $#%^, if I have a stretch mark already, I may as well paint my entire waist in purple stripes by the time April rolls around!” Turns out it was a scratch from a briar that had happened at some point on the hike…just another flesh wound. 🙂 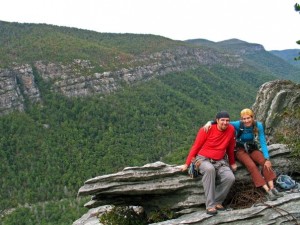 5 Responses to “Briars and Scrambles and Gullies, oh my!!!”