Our Thanksgiving holiday was a whirlwind of fun, filled with some traditions, a few new tricks, as well as some unexpected surprises!  I guess I’ll start at the beginning.  On Wednesday, me and the Bean had a prenatal appointment in the morning.  I peed in a cup, got my vitals taken, my belly measured, and then we got to listen to J-bean’s heartbeat on the Doppler.  For those of you that don’t know, the doppler is a nifty little piece of machinery that probes around the belly to detect the fetal heartbeat – once the doctor finds the right spot, he leaves it there for long enough to record the beats per minute.  Well, evidently J-bean wanted no part in having his heartrate measured, so he decided to kick the doppler probe, which I of course felt, and caused the doppler to blip and the doctor to have to start over his count.  It is starting to look like we’ve got a feisty one on our hands…he must get that from his dad 🙂  After the check-up, we drove down to Winston-Salem to stay with my parents for a few days.  We spent the afternoon at Babies R’ Us, where we picked out a crib that my parents were gracious enough to purchase for us!  Best of all, it didn’t cost any extra to have it shipped right to our door in Raleigh!  We decided to mix it up a bit on Thursday, so rather than eating a big lunch, we went to the movies and then had a big Thanksgiving dinner.  We saw The Blind Side , which was fantastic, and especially fun since it was based on a true story.  For dinner we had all the usuals, and everything was yummy with the exception of the pie fiasco, which I don’t have the time to go into here, but you can read about on my mom’s blog.  We had quite a laugh… 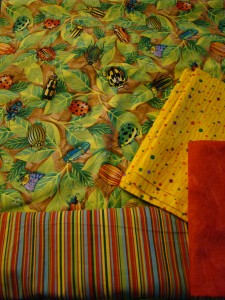 On Friday my mom and I drove down to Gastonia, home of our favorite fabric store.  We were on a mission to find fabric to make the bedding/other decor for the nursery, since I was completely uninspired by anything I had seen at any of the stores or online.  Surprisingly, it took us no time at all to find the PERFECT mix of fabrics!  I can hardly wait to see what it looks like after we’ve made everything and it can be put together, along with the rainforest animals my friend Kim is going to paint on the walls over the holidays!

So what were the guys doing while we were hunting for fabric?  Hunting for CARS of course!  We’ve known for a while now that my old Eclipse has been in desperate need of replacement for a couple of years now, and that there is NO way we could get a car seat to work in the back of it, so the clock was ticking.  Our plan was for me to inherit the Element since my commute to work is less than 4 miles, and since its the perfect baby-mobile – then we would get Steve something fuel-efficient that he could use to commute to work and on his monthly trips to Charlotte, which would balance out the mileage on both cars pretty nicely.  Steve’s intent was just to scope things out and take a few test drives on Friday, but he ended up finding a deal that was too spectacular to pass up, so he waited for us to get back, and then we went down to the dealership so I could check it out.  We are now the proud owners of a 2007 Toyota Camry Hybrid!!! 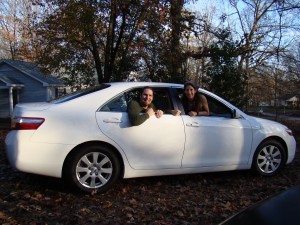 We originally had plans to climb the rest of the weekend wherever it was the warmest, but with adding an unexpected car to the mix, we felt like it would best to just to day trip it and then head back to Raleigh that night, so we ended up at Pilot again.  The morning was FRIGID, but once the sun got up nice and high the wind stopped and it turned into a beautiful day!  We had a very relaxing, casual day – we did 2 new routes we’d never done before, followed by 2 old stand-bys that we always like, and ended on 2 old routes we hadn’t done in years. 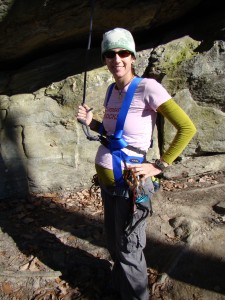 Duracell – 5.8 – probably would have been more enjoyable had I been able to feel my fingers…
Oscar Mayer – 5.10 – really fun layback moves at the bottom led to juggy face climbing up top
Body Surfin’ – 5.7+
Hawaii-Five-0 – 5.11a – I’d only gotten this clean a couple of times before b/c it is so pumpy and sustained, so my hopes were not too high for this one, but I ended up feeling really good on it!  I actually made it past the crux and got 20 feet or so from the top before I had to stop and hang for a bit.
8-Ball – 5.8 – this used to be Steve’s nemesis b/c of the overhanging start, and it was fun to see him storm up it this time like a champ 🙂
9-Ball – 5.9 – amazingly steep for a 5.9, I surprised myself by flying right up it without any trouble – clean for the first time! 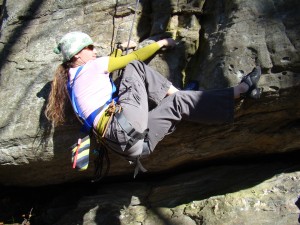 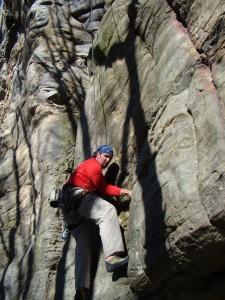 Steve on the moves after the start

It was getting really crowded by mid-afternoon, so we decided to call it an early day and hike out.  We made it back to Raleigh and had a celebratory dinner at Five Guys Burgers and Fries, a new and yummy addition to the restaurants on the post-climbing circuit. 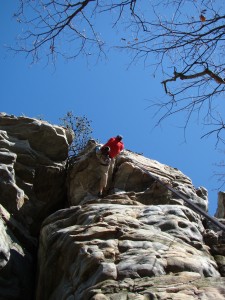 Steve finishing the roof with style!

2 Responses to “A Hodgepodge of Fun!”