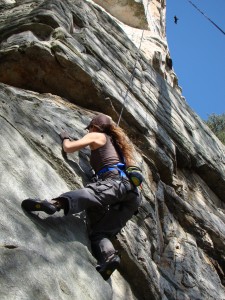 This just in – rock climbing is more fun than staying home raking leaves…even if it is at Pilot Mountain.  For those of you that are not in the know, Pilot gets somewhat of a bad rap sometimes…okay a LOT of times.  The rock quality can be questionable in places, the routes are short, and the base of the cliff is generally overrun by swarms of red-helmeted boy scouts and other groups of people on their first “extreme rock climbing adventure.”  Not to stereotype or anything, but these newbies generally have entirely too much testosterone pumping through their veins, and they love to proudly grunt and flail their way up a 5.6, then look down to make sure any girls within earshot are adequately impressed.  Or they might be gym climbers who assume that the one 5.10 jug haul they can climb in their local gym means they should have no problem with technical moves requiring precision, balance, and the ability to find your own holds without the aid of colored tape.  Not to mention the hikers, who will heckle you with ridiculous questions from both the top and bottom of the cliff – “Is that your rope, or did you just find it here?,” “That takes lots of arm strength doesn’t it?”, or my personal favorite, “If you let go right now, would you die?” 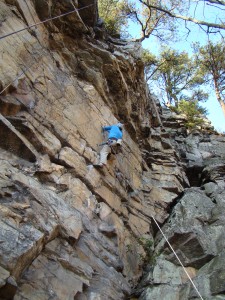 Confessions of snobbery aside however, Pilot does have some very good points in its favor worth considering.  It is a fantastic place to take your inexperienced friends to get them hooked on climbing!  Most of the routes can be accessed from the trail at the top, so if you can’t finish a route, its usually pretty easy to retrieve your gear.  And if you can climb 5.10’s and higher, it has a decent collection of nice sport routes that the gumby crowds often steer clear of.  It is also south-facing, which means so long as its not cloudy or windy, a sunny day in the dead of winter can be quite pleasant.  I know several climbers who wouldn’t be caught dead at Pilot, but I think that’s just silly.  You just have to take it for what it is, and not expect it to be something its not.  Don’t go there hoping for long, aesthetic routes on bullet hard quartzite – if you want that, go to Moore’s.  Don’t go there hoping for remote solitude in a wilderness setting – head to the Linville Gorge.     But if you are looking to have a casual Saturday of fun on the rock with your friends, and still be able to get back to responsibilities the rest of the weekend, Pilot is your place! 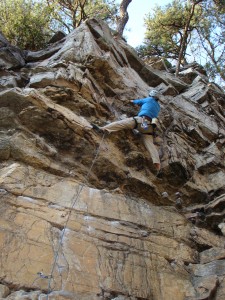 Steve pulling thru the overhangs

All that being said, Steve and I headed up to Pilot this past Saturday for the first time since early last spring.  It was the perfect temperature for climbing – cold enough in the morning to ward off the aforementioned obnoxious types, but warmed up fast enough to make for a beautiful day of climbing!  We knew our friend Huck and his friend Dax would be meeting us there, but we ended up seeing 3 other groups of people that we knew, so it made for a fun social scene as well!

Here’s the routes we did…
Vegomatic – (5.8)
Chicken Bone – (5.7) There is a discrepancy between Jeff Dillon’s new guide and the old Kelley guide, so we’re not sure which route this one is, but its the one in the middle if there are any old school folks out there that know?
Mutiny on the Bounty – (5.10a) kind of an “approach pitch” to get to the ledge where the next route starts
Man Overboard – (5.11-) Woo hoo – my 21 weeks preggo clean 11 went down pretty easily, and I was able to find a clipping hold at the shutts that I had never seen before, making me psyched to come back and lead this route post-preg!
The Herculean Test – (5.11a)
Devil in the White House – (5.10d) 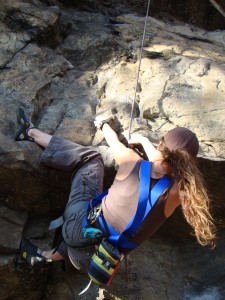 Trying to reach past the belly on The Herculean Test (5.11a)

Observations:  While I did get my clean 11 at 21 weeks, I think those days are numbered…Today was the first day of climbing where I actually noticed my body shape hindering my ability to climb, which is annoying, but needs to be accepted as a fact of life, b/c it is only going to get worse from here on out.  In particular, I noticed that whenever I tried to rock onto a high foot, my belly felt in the way, and I couldn’t bend over far enough to really crank up.  Not painful, just very uncomfortable.  I also have noticed that while my endurance seemed fine on the first few climbs, by the time I got to the last two climbs I would get winded pretty easily, and was unable to do either of those climbs without resting midway through, even though pre-preggo I was able to lead both of them without any trouble.  So although as a whole on the day, I still felt fairly strong and confident, I feel like its probably about time to start toning down on the harder stuff.  But instead of looking at it in a negative way, however, I’m choosing to see every step back from my prior activity levels as one step towards the end goal on April 2nd!  🙂 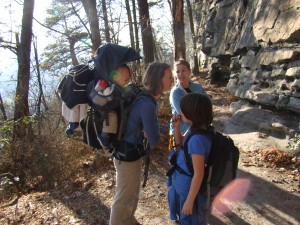 Christine, Jean, and Mary get ready to hike out, while Finn takes the easy way out 🙂