So I haven’t been good about updating my blog recently with all the holiday hubbub, but I thought I would throw out a quick holiday sum-up as my last blog post of 2009…

We started out our holiday with a doctor’s appointment for the J-bean on Monday, December 21st.  All was well, so we hopped in our loaded down car and drove down to Sandrock, Alabama for a couple days of climbing before celebrating the holidays with family. 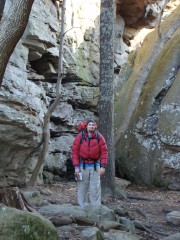 The Main Area at Sandrock, Alabama

Sandrock turned out to be really fun – by no means a must-do destination, but definitely fabulous for a side trip excursion!  Since the low temps were hovering around the freezing mark with a fair amount of wind, I decided to cut myself some pregnancy slack and spring for a cheap motel rather than a campsite.  I think this was a good decision, especially considering how cold it was in the morning even by the time we got to the crag, and also how good my nice hot shower felt that night.  🙂 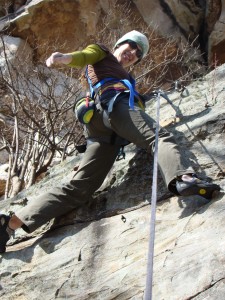 DAY 1 ~ Main Area and The Islands

My Dog Has Fleas – 5.8+ – Not a good choice to start the day out in the shade…the rock was ridiculously cold, and my hands were completely numb.
Six Toes – 5.10a – Much warmer in the sun!  Thin, sequency crux led to steep jugs.�
Thin in the Middle – 5.10d – Awkward, thin moves in the middle with a weird, balancy roof section at the shutts
Thin’s Evil Twin – 5.11c – 30 feet of really techy slab climbing – crux around the second bolt, then backed off to 10+ towards the top.  I was psyched to get this one clean for my 25 week 5.11 🙂
Thin’s Daddy – 5.12b – a harder variation of the previous climb.  Only 30 feet, and I had to hang twice, but I definitely did all the moves, so Jbean can say he climbed 5.12 in utero! 🙂
Kennel Club – 5.8 – this route was back over in the main area, and was really fun – pretty tall, and a nice, casual way to end our day.

Enjoying an Alabama sunset from the top of a pillar - great view of Weiss Lake! 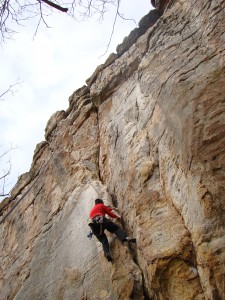 Steve laying back his way up on Popular Science, 5.9+

Popular Science (aka Golden Flake) – 5.9+ – a little pumpier than I had anticipated for a warm-up.  I could tell its been a long time since I’ve done any crack climbing, but once I got started I didn’t have too much trouble with it.
Ale 81 – 5.10c – Really hard, steep move right off the block.  From there the climbing was much more straightforward but slightly overhanging and really sustained. I missed a hand hold around the corner about halfway up and had to hang.  Felt hard for 10c.
Misty – 5.10d – Definitely the best route out of all of the ones we did.  Crimpy crux moving thru the conglomerate at the 2nd bolt, then big moves to jugs the rest of the way up – this one would have been really fun to lead…
First Black in Space (aka Windows) – 5.8 – Really fun climb, got really overhanging for a 5.8 towards the top
Super Grover – 5.11b/c – Steve had to haul me thru the crux (which to me felt way harder than 11c…) but the rest of the route went down pretty smoothly.

Next it was on to Atlanta, where we spent the next 4 days with Steve’s parents, both brothers, and my sister-in-law (who is also pregnant, due 3.5 weeks after me!)  We ate some great food, got some cool presents, and saw Avatar in 3D!  We also got to see (or not see, rather) a really cool exhibit in downtown Atlanta called “Dialog in the Dark.”  Basically we went thru different rooms with a guide who was visually impaired, in complete darkness, exploring different everyday scenarios with our other 4 senses. 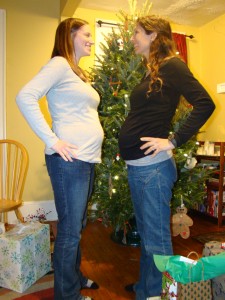 Megan and I comparing bellies!

We headed north on Sunday morning after breakfast, drove most of the day, and ate dinner at my Grandma and Pop Pop’s house with my parents, aunt, uncle, and cousin.  I spent the next couple of days relaxing at my parent’s house and trying to learn how to knit (any knitters in Raleigh that can help me finish off the cute little hat I made for the bean?).  Steve helped my mom move all of her networking and computer stuff for her business into her new studio, which is almost finished! 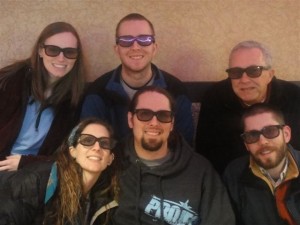 Modeling our 3D glasses before Avatar

Even though we had a great time and thankfully got to see both families, we were glad to head home yesterday morning.  Neither Steve nor I have to work the rest of the week, so we plan on relaxing, working on the baby’s room, and celebrating the New Year in addition to my official entry into the 3rd trimester!  Stay tuned for a 2009 highlight reel coming soon!