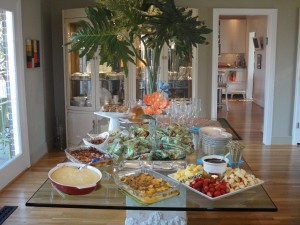 Steve and I headed west Friday night for the start of our fun-filled, but exhausting weekend.  On Saturday morning our parents threw us a baby shower.  There were about 50 people there and we got LOADED down with gifts! Speaking of gifts do check out these things to send boyfriend at office, which I recently found thamnks to one of the people at the shower.  I got to catch up with lots of folks I hadn’t seen in a long time, including my roommate from college, as well as some old family friends. 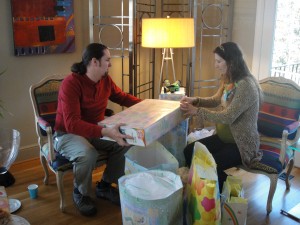 I feel like I ate my body weight (which at this point is quite significant…)  in fruit and fondue, but had a blast!  I also had to make a wardrobe change about halfway through…because of all the people (and perhaps a few extra hormones) I got REALLY HOT and went upstairs to take my sweater off.  However, when I took it off, I discovered that my long-sleeved shirt that I had underneath had some pit sweat…Well, I couldn’t be the guest of honor with nasty armpits, so my only choice was to do a complete change into a short sleeve shirt – I figured I could get away with it since I was pregnant.  🙂 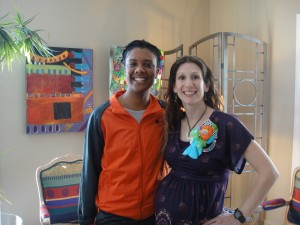 We rounded out the weekend with our very last outdoor climbing trip before the C-Squatch arrives!  Being the first good weather weekend in who knows when, we had been quite anxious to get out – especially considering that from this point on we probably don’t want to be 2 hours away from the hospital.  Since we were in Winston-Salem anyway, it seemed a crime not to take advantage of it. 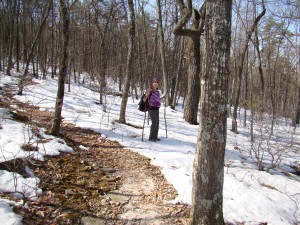 A beautiful snowy start to the day!

But our last excursion as a twosome was not without a twist, however.  We found out that due to icy and snowy conditions, the road up to the summit was closed.  Instead we had to park at the ranger station halfway down the mountain and hike in an extra 3 miles along the Grindstone Trail, which would put us at the westernmost end of the cliff line, the opposite end of where we usually start at from the summit parking lot. 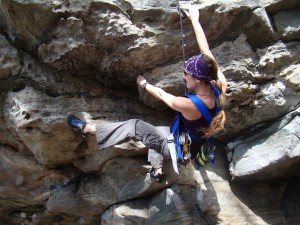 Working thru the bouldery start on 9-Ball

We were shocked at how much snow was still on the trail!  Although the 6 mile round trip hike ended up being at least  additional 2 hours or so, it wasn’t difficult terrain, and it was beautiful with all the snow on  the ground!

Due to our somewhat lazy start on the morning and all the extra hiking time, (plus not wanting to get back super late) we only got in 4 routes, but it was still a great day! 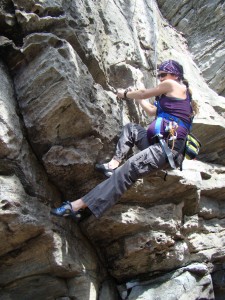 Snooker – 5.9
9-Ball – 5.9 – definitely felt my extra belly weight a lot more than I had a couple of months ago when I did this route…
Hawaii Five-O 5.11a – got some new beta from some other climbers on a different way to do the start.  The new way kept my big belly out of the way a bit better than the way I had been doing it.�
Body Surfin’ – 5.7+ 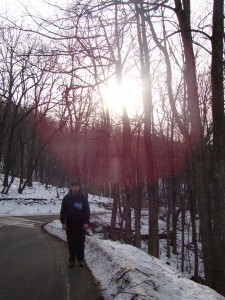 Steve in a snowy scene just past the ranger station