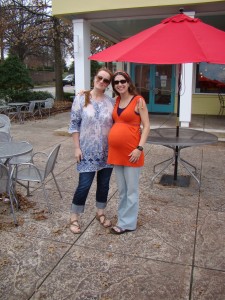 This is the story of how Canaan Ray Lineberry entered the world.  On Friday, March 19th, I finished my last day at Chesterbrook Academy, and was ready to enjoy two full weeks off before my due date.  Folks kept asking me what I was going to do with all that time off, and I jokingly would say that there’s no way the little guy was gonna let me have two weeks all to myself.  Steve predicted that I would go into labor at 4:00 Friday afternoon, right when I got off of work.  I was a little more cynical, and said that the C-Squatch was gonna let me go the whole weekend looking forward to my time off, and planning my activities, and then decide to come when I woke up on Monday morning.  As it turns out, I called it pretty well…

Our weekend started out just as the past several before had gone.  We went to the  climbing gym Friday night so that I could dutifully log my 38 week 5.11 (which was down to only one that I could still do…)  Saturday was a beautiful day, so we did our traditional walk down to and around Lake Lynn, and then headed over to Chapel Hill to watch the Dixie Rock Climbing Comp finals that night.  On Sunday, we went to church and then caught up with some dear friends for brunch around 11. 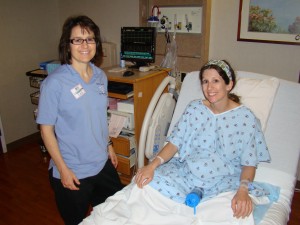 Tracey and I taking a break between contractions

It was a nice day and we ended up lingering and talking for a few hours.  Steve and I originally had planned on heading to Umstead Park after brunch for a nice leisurely hike, but the weather had gotten a little cool for the change of clothes we had brought, plus I felt like I might should have a snack, so we decided it would be best to stop off at home first.  When we got home, I felt really tired, and decided to lay down for a bit.  Steve came back to tell me he was ready to go, and I was knocked out.  We decided that it might be best to just rest for a bit, and then perhaps just take a stroll around the neighborhood.  After a few minutes, my back started hurting really bad, and when I stood up, I thought that my water may have broken.  I think Steve and I both were silent for several minutes while our minds reeled around a few times trying to process that this could be it!  We debated calling the doctor right away versus waiting around a while.  After a few minutes, it became apparent that this was no false alarm.  Here’s how everything went down… 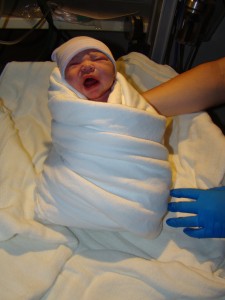 2:30 – Water breaks
2:45 – Started having strong contractions 4-5 minutes apart (where were the hours of 10-20 minutes apart mild contractions we learned about at childbirth class?!?)
3:45 – finished packing, called doula, left message with doctor
4:15 – contractions 3 minutes apart, decided not to wait on the doctor and headed to the hospital (doctor calls as we are headed in and tells us to come on in – he’d been called in to an emergency C-section when we had called earlier)
5:30 – admitted to a room,  3.5 cm dilated, 90% effaced, pain level around 4 or 5.   Walked the hall, used birth ball, kept breathing as contractions got stronger.

It was very helpful having Steve and Tracey (our doula) there.  During a contraction we would hold hands, and they would tell me when the contraction had peaked and was on the way down. 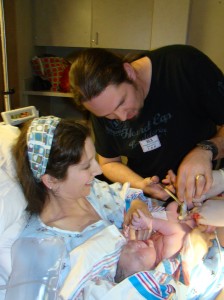 7:30 –  Cervix check was 5cm, 100% effaced, pain level around a 6.   Even though the contractions were getting stronger and stronger, I felt like I was able to relax enough in between to get my strength back, which made the pain seem manageable.�
9:00 – 9:40 -Started having really bad back labor.  Turns out the little guy was sunny-side up (head down, but facing the front instead of the back).  The nurse told me how to change my body position to get him to turn.  At this point my pain level shot up to around 8 or 9, and my back was in a relentless spasm, even between contractions.  Started to feel a bit panicky, and told Steve and Tracey that I might need to get the epidural.  After about 25 minutes in this position, I felt the baby turn, and though it took some of the pressure off my back, I still felt dizzy, nauseous, and clammy.  Tracey suggested that we have the nurse check our progress – everyone was pleasantly surprised that I had already dilated at 10 and was ready to push!  Thoughts of the epidural quickly faded since I knew we were so close. 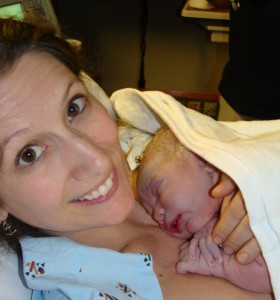 Some skin to skin love

9:40-10:20 – Relieved that I had made it thru transition, I got a second wind.  I relaxed through the next several contractions, trying to breathe through them, letting the baby do most of the work, and then we started pushing.  It felt much better to have something to do during the contractions, but I couldn’t keep myself from feeling really dizzy…got hooked up with some oxygen, which didn’t take away the dizzies, but probably kept me from passing out.�
10:20pm – The C-Squatch is born!!!

We couldn’t have asked for the delivery to go any better.  I was really appreciative of our support team – I definitely could not have done it without them.  Our nurse was awesome, and very supportive of our decision to go natural.  Steve was amazing, as expected, and it was really great having Tracey there to handle all the medical jargon with the nurses and doctors so that Steve could be there for me.  Steve also read out the comments on my facebook status throughout the early part of the evening, and it was really neat to feel like there were all of these people I knew cheering for us. 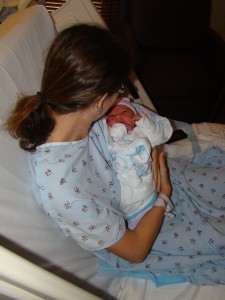 Getting to know each other

After Steve cut the cord and we had some snuggle time with the little bean, the nurse took all of his stats and sponged him off.  We got moved to a regular room where I was finally able to eat something for the first time in 12 hours (I ordered a cheeseburger and some angel food cake off the after hours menu).  This whole process was slightly hindered by me passing out several times, but eventually we got in and got settled.  The three of us stayed together pretty much the whole time and were finally released to go home on Tuesday afternoon.  Since then, its been a wild ride, but all in all, I think the three of us are adjusting well.  We love our little bean and are having a lot of fun getting to know him and introducing him to life outside the womb! 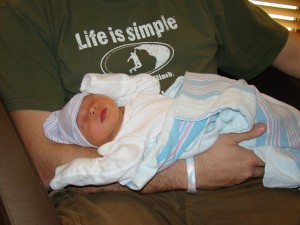 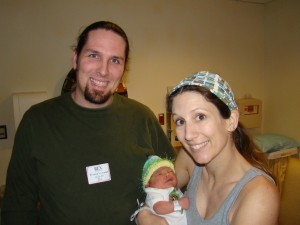 Family photo-op on our way out of the hospital